Read Murder... Now and Then Online

Murder... Now and Then 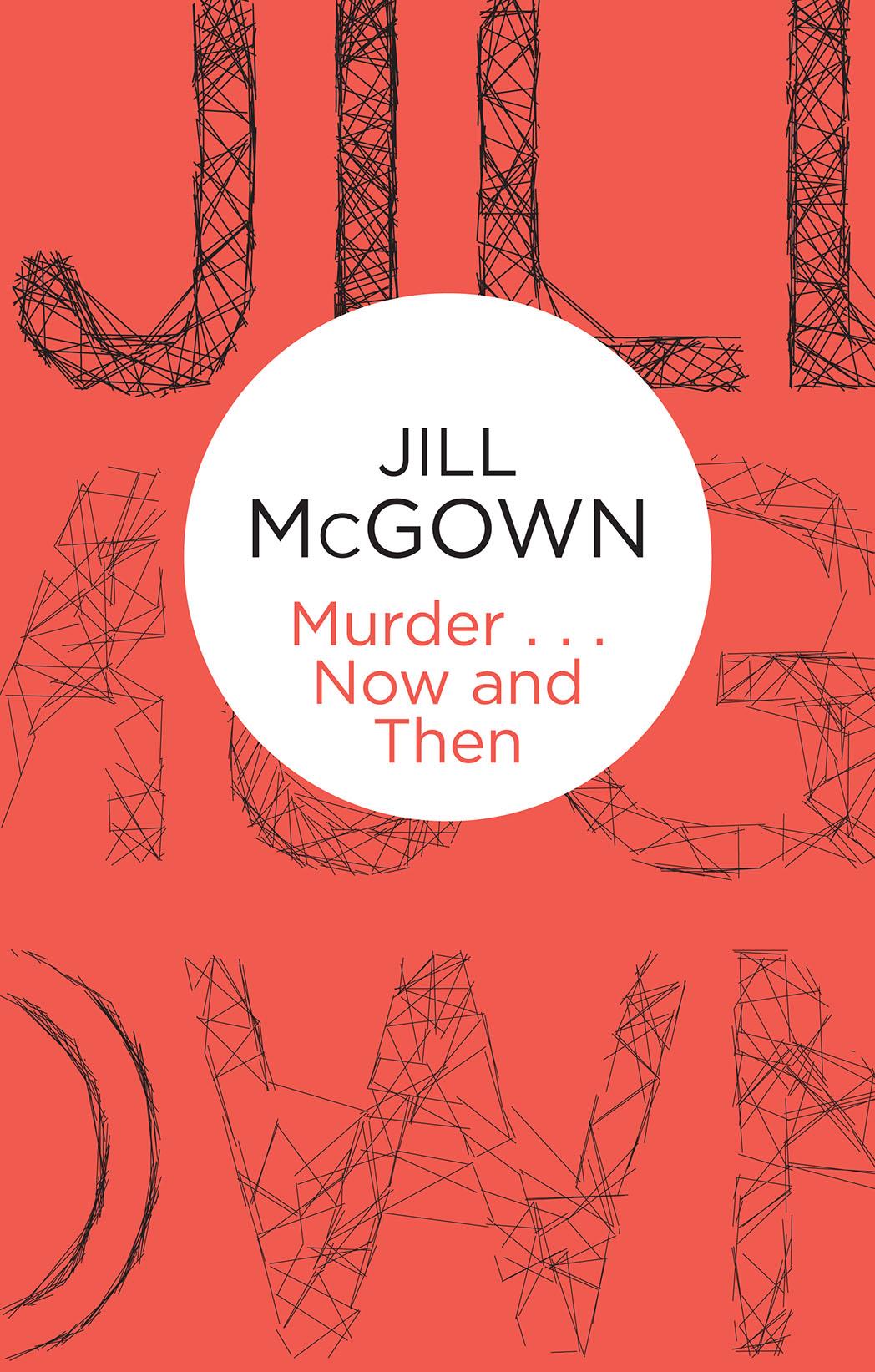 Jill McGown, who died in 2007, lived in Northamptonshire and was best known for her mystery series featuring Chief Inspector Lloyd and Sergeant Judy Hill. The first novel,
A Perfect Match
, was published in 1983 and
A Shred of Evidence
was made into a television drama starring Philip Glenister and Michelle Collins.

Max Scott looked at the people milling about the reception area, and an old joke came to him:
Man to wife: âDo you know they say that the man at number seventeen has had every woman in the street but one?' Wife to husband: âIs that right? I wonder which one?'
And he smiled, despite the way he was feeling, because he had had every woman in the room but one.

Not as proud a boast as it might seem; of the dozens of people there, only four were women, and one of them was Catherine.

He and Catherine had married twelve and a half years ago on her eighteenth birthday, in a blaze of publicity as adverse as you might expect so soon after Valerie's death. Eighteen years his junior, almost fragile-looking, fair, pretty â once Max wouldn't have believed that he could ever look at his young wife with something less than love in his heart. God knew, he had done his share â more than his share â of accommodating Catherine's hang-ups. But just getting her here had been like dragging a dog to the vet, and it was the overreaction, the self-dramatization, that had made him lose patience with her. Catherine, with whom he had once been prepared to take infinite pains, was a child no longer, and simply had to grow up.

Now that he was actually going to meet Victor Holyoak, Max was having to fight down the butterflies that he could feel making an uncharacteristic bid for freedom in his stomach. Almost fifty, and this was the first time that he could recall the experience. It was Catherine's nervousness communicating itself to him, he supposed.

She
was
nervous â terribly nervous, and he could have been and should have been more understanding last night, he thought, with a stab of guilt. Catherine had seen him through the worst moments of his life, and looking at her now, she was so like the little girl he had met all those years ago that he felt like a monster. She had never doubted him, not once. And it was thanks to Catherine that he was here at all, if thanks were in order. On the whole he thought they might be, despite the cataclysmic row they had had about the whole business.

But he couldn't go to her, not now. She was too uptight about it all for him to say the sort of thing he wanted to say, ought to say, with all these people around. He would make it up to her when it was all over. He caught himself being pointed out to someone by Anna Worthing, Victor Holyoak's PR woman, and gave a mock bow towards her.

In the mean time, he had some brazening-out to do.

Max stood alone, watching the gathering with a faintly amused look as the local dignitaries pointedly stood with their backs to him. He was tall, his brown hair greying at the temples. Not conventionally good-looking; his face was a touch too long for that. The twinkle in his eyes, his light, casual clothes â obvious in amongst all the grey suits â signalled his refusal to take himself or anyone else seriously, though Anna knew that he was undoubtedly taking today rather more seriously than he wanted people to know.

âWell â¦ no,' said Anna. Surely he must know about Max? It would appear not, she thought, as Lloyd looked at her with puzzled interest. She didn't enlighten him. Far be it from her to give information to a policeman, even if all he would have to do was look in his own files.

He looked round. âThe famous Victor Holyoak isn't here yet, I take it?'

He was Welsh, she realized. Lloyd was, now she came to think of it, a Welsh name, but she hadn't noticed his accent until now. She shook her head. âNot yet,' she said. â He'll be here soon, I expect.' She looked at her watch for the umpteenth time, anxiety tugging at her.

It wasn't the minister's arrival that Anna was worried about, but she appreciated the moral support. Lloyd was quite nice, she supposed, a little grudgingly. For a policeman. She would have said that the chances of her finding any law enforcement officer attractive would have been nil, and it was difficult to see where the attraction lay, exactly. He was balding, for a start. But at least he was letting it happen, rather than combing strands of hair over the scalp. The remaining hair was very dark, short and wavy. Black eyebrows, very blue eyes. A nice smile.

âIs there a Mrs Scott?' he asked, in apparent innocence.

Presumably he really didn't know, thought Anna. âYes,' she said. âThat's her, over there. The one in the coat.' She nodded over to where Catherine sat close to the doorway, trying to melt into the background, and very nearly succeeding. She was what dress designers used to call petite. Which meant that she was the same height as Anna but a stone lighter, and a size smaller. And she had an almost childlike air, something which Anna always found intensely irritating, but men found attractive. Today, she looked scared to death, Anna noted with impatience, though what she had to be scared of, God knew. She didn't know she was born, in Anna's opinion, and any problems she had were of her own making.

Lloyd raised his eyebrows when he saw her, a little surprised. âShe's very young,' he said.

âNot as young as she looks,' said Anna tartly. Catherine was just two years younger than she was herself, but if you listened to Victor, you would swear that Anna was old enough to be her mother. It was high time Catherine grew up, in Anna's opinion, and she had uncharacteristically given Max the benefit of that opinion. He had agreed, which was something. But she wished she had kept her mouth shut, all the same, because Max and Catherine didn't seem to be on speaking terms, and she had caused that.

âThat's Zelda Driver sitting beside her,' she went on, trying not to think about what was really worrying her. âThe blonde with the earrings. She owned the business until Holyoak International bought her out.'

âOh, I know Zelda,' said Lloyd, with a smile. âI suppose I should be talking to her if I want to know about everyone.'

Anna smiled back. Zelda would know more about the people present than they did themselves, she was sure.

âWho are the couple sitting with them?' he asked. â Sorry to be such a pest â if I'd known I was coming I'd have done some homework.'

âIt's no trouble,' said Anna. âRule, their name is. They're both doctors â they run a practice together. It's thanks to them that we've got a cabinet minister here to do the honours.'

Her instinctive reaction on seeing the Rules had been to take to her and not to him, despite the fact that he was really quite handsome; dark, very short, well-groomed hair, expensively dressed, quietly spoken. She hadn't even spoken to him, but she was used to summing up men in an instant, and he had failed to pass the test. Something ungenerous about the mouth, something humourless about the eyes. Mouths and eyes; that was what she went by. Geraldine Rule, on the other hand, was the sort of woman Anna wished she was; tall, slim, trim. Her brown hair curled softly and naturally, and she wore as little make-up as her clear skin needed.

Catherine Scott said something to the others at the table, her eyes on Anna as she spoke. Anna looked back again at Max, who smiled at her reassuringly. But she felt far from reassured.

âThen he's a fraud,' said Catherine Scott. âPassing himself off as the devoted husband.'

Geraldine Rule didn't let her expression slip when Catherine spoke, but it really didn't do to get all moralistic with your doctor sitting across the table from you, she thought. They were discussing Victor Holyoak, and Zelda's supposition that Anna Worthing was his mistress.

âOh, Catherine,' said Zelda. She laughed, a husky smoker's laugh. Zelda had dramatic, almost gypsy-like looks, with brown eyes, pink lips, dangling earrings and blonde, dye-assisted hair. She was coming up to fifty, and her earthy approach to life had only increased with the passing years. âSurely you can't blame him?' she said. â I mean, with his wife beingâ'

âNow, Zelda,' said Charles, his mock warning sounding genuine enough to startle Geraldine a little. She turned back to look at her husband as he carried on. âYou don't know what the situation is with Holyoak and Anna Worthing â and neither does anyone else.'

âSo you actually believe that he's built a penthouse flat upstairs as a courtesy to visiting businessmen?' asked Zelda.

âAnd â incidentally â for his own use when he's working late and doesn't want to disturb his poor sick wife by going home,' said Zelda. âIt's obvious what it's for, Charles.'

Catherine stood up and walked away with an abruptness that made three pairs of eyebrows rise.

Charles sighed. âZelda â you'd look for intrigue in a monastery,' he said.

A good place to start, if you asked Geraldine. She was glad of Zelda's mildly malicious conversation; she had not been looking forward to today, and the nonstop gossip was taking the heat out of it a little.

Max and Catherine had arrived barely speaking to one another, which did rather leave Max out in the cold, since none of the civic dignitaries wanted to have much to do with him. The cold-shouldering did not extend to Catherine, who had been seen as an innocent abroad at the time, and who still managed to retain that air. But now that she had left their table, she too was alone, standing by the wall, almost as if she needed its support Max had taken root at the other side of the room, trying hard to look relaxed and debonair; Catherine, on the other hand, was managing to make drinking a gin and tonic look like she was wringing a handkerchief.