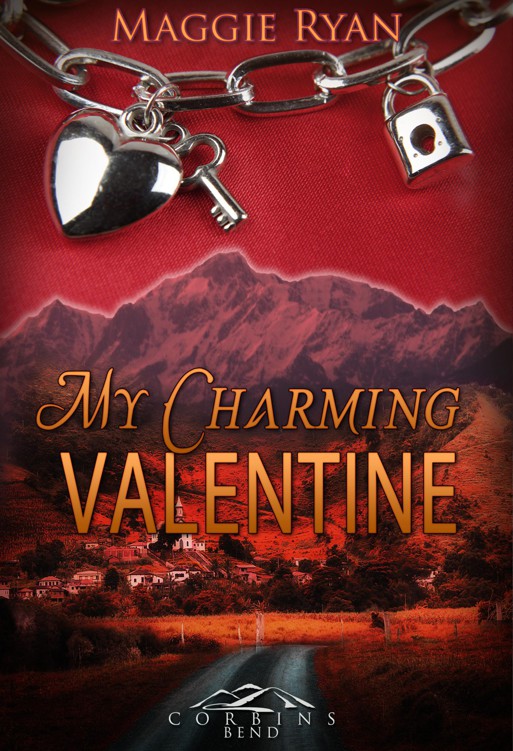 ©2015 by Blushing Books® and Maggie Ryan

No
part of the book may be reproduced or transmitted in any form or by any means,
electronic or mechanical, including photocopying, recording, or by any
information storage and retrieval system, without permission in writing from
the publisher.

is
registered in the US Patent and Trademark Office.

This
book is intended for
adults only
. Spanking and other sexual activities
represented in this book are fantasies only, intended for adults. Nothing in
this book should be interpreted as Blushing Books' or the author's advocating
any non-consensual spanking activity or the spanking of minors.

New
from Blushing Books: Love in the Rockies

New
from Blushing Books: When the Gavel Falls

“A game? You want to play a game on
Valentine’s Day?” Phoebe gave her husband a suspicious look. “What kind of
game? Don’t think I’ve forgotten the last game we played. Every time I pass a
tree, my butt twitches.”

Patrick grinned. “I promise, this one you
will enjoy and technically, Valentine’s Day isn’t until tomorrow.” He reached
over and pulled her onto his lap. “Besides, I’m thinking someone protests too
much. As I recall, your beautiful bottom wasn’t the only thing twitching by the
time the game was over.”

He loved her blush as it moved up her
body to color her cheeks. They had played hundreds of games during their
relationship. An entire shelf in their closet was stacked with board games of
every kind. Not having had a great deal of money during their first few years
of marriage, they’d often made an evening of playing games, eating popcorn and
drinking cheap wine instead of going out.

Their kids had continued to look forward
to game night, often inviting their friends to join in the Friday night
tradition until they had gone off to college. Now both Katy and Sam had married
and moved to different parts of the country. Both had been a bit shocked when
their parents had sold the home they’d grown up in to move to a spanking
community in Colorado.

Patrick and Phoebe had always had a
traditional marriage, where he was the head of the household. They’d not kept
it hidden from their kids, but they didn’t advertise the fact that their mother
got spanked when she broke a rule, either. When Katy figured it out, she spent
months trying to convince her mother that it was the twenty-first century and
not the 1950’s. Even though her mother was patient and would sit for hours and
reassure her daughter that this was the life she wanted to live, it had been
Sam who'd reminded his sister that their parents were grown-ups and had the
right to make their own choices. Still it had taken a visit to Corbin’s Bend to
convince Katy that her parents had not joined a cult and that both appeared
even happier and closer than before.

Though those years of watching every
penny were long gone, Patrick and his wife still enjoyed playing games
together. However, one evening about a month ago, she had been getting
grouchier with every roll of the dice during a game of backgammon. When he kept
rolling double after double, sending several of her pieces to the bar, she’d
thrown a fit as well as the dice.

She had been almost as shocked as her
husband. He might have been able to forgive the tantrum, but he certainly
hadn’t been about to forgive the colorful words she'd screamed as the dice hit
the wall. Before she knew it, she was outside selecting the switch that would
soon be searing her backside. After choosing one and breaking it off, she’d
cursed again when it snapped in two, neither piece long enough to be
acceptable. He hadn’t hesitated to move from where he’d been leaning against
the tree to deliver a sharp swat to the seat of her pajamas. She’d yelped
loudly and thrown the switch away, only to see their neighbor’s dog attempting
to pull his master into the yard so he could play fetch. Though the neighbor
didn’t say a word, Patrick had been able to tell from Phoebe's blush that she
knew the man could easily figure out what she was doing and why. He’d remained
silent as she cut a proper switch. Back inside, he’d bent her over the arm of
the couch, divested her of her pj bottoms and panties, and given her a dozen
licks of the switch. After she'd spent a half hour in the corner with her
striped rear on display, he’d forgiven her—as well as comforted her in a
far more pleasant game.

“Are there going to be any switches
involved in this game?” she asked, as she trailed her finger down his naked
chest.

Patrick patted her hip. “Babe, that would
depend on you.” He captured her hand and brought it to his lips, pressing a
kiss against her palm. “I promise that no dice are involved. You won’t need
luck to win. All you’ll need is to do some role playing and use that very
creative mind of yours.”

That statement appeared to pique her
interest. “Role playing? So, let me get this straight. I am going to play some
sort of role and that is going to make this the best Valentine’s weekend ever?”
She batted her eyes as she looked up at him. “Do I get to be the director and
boss you around?”

He laughed as he easily moved her again,
pinning her on her back, her hands above her head, captured in one of his.
“There’s only one director in this game, and believe me, little girl, it’s not
you. Before we begin the game, perhaps I should remind you who the boss is.
Let’s see if you can remember your lines.”

Shrieks filled the room as his free hand
began to tickle her from her armpit to her waist, until she was squirming
beneath him and gasping for breath.

Patrick changed
the game as he sat her up only long enough to remove her nightgown. He began by
kissing her forehead, her cheeks, and then her mouth until she was gasping for
breath again. He kissed her neck and her throat, slowly moving down her body to
capture a taut nipple, lathing it with his tongue before suckling hard and
giving it a gentle bite. Her moan made him grin as he treated her other breast
with the same attention until she was squirming for another reason.

His mouth
continued to move down her body, his lips pausing to suckle or take tiny nips
against her skin. She arched as his free hand moved between her thighs, pushing
her legs apart. Her panties proved to be no obstacle as he simply pulled the
gusset aside, using his tongue to give her a long, slow lick before he released
her hands to peel the garment down her legs, tossing it onto the floor.

“Who’s the
director?” he asked, as his lips moved to nibble up her inner thigh, sliding a
finger into her slick pussy.

“You are,” she
managed, even as she gasped when he added another finger and began to stroke
slowly in and out of her. She’d once told him he could have her forget her own
name when he made love to her so slowly and deliberately. He’d decided it was
quite a compliment and made sure she’d never feel rushed. Her legs were
quivering as his head dipped again to kiss, lick and suckle on her clit. He
felt her fingers running through his hair, attempting to press him closer, to
hurry him along. Instead, he released her clit, only to blow gently across the
pulsing bud as he gave her tiny licks everywhere but where she craved them.

“Please, Pat, I
need to come,” she moaned, her hands leaving his head, acknowledging that he
and he alone was in control.

He lifted his
head. “No directing, remember?” he teased, and then bent again to suck the
entirety of her clit into his mouth before biting down. She arched up and
screamed as she exploded.

Patrick moved
over her, entering her in one thrust. Her scream was captured as his mouth
pressed against hers. Gentleness disappeared as he took her hard and fast until
her hands were gripping the sheets and her body was moving to meet every
movement of his in a well-practiced dance.

“Come with me,”
he growled as he slid his hands beneath her, cupping her buttocks as he lifted
her. Pushing deep, his hips flexing, he thrust in and out of her. “I want you
to come hard and I want you to come now.” With a final thrust, he buried
himself in her and she obeyed. Her muscles contracted, milking his length as he
emptied into her. Phoebe’s arms and legs, which had been wrapped around him,
now slid to the mattress as if every muscle had disappeared.

When he rolled
to his back, he pulled her with him until she was on top, her head lying
against his chest. Several minutes passed as they recovered and then she came
back to life as his hand popped against her bare butt.

“Ow! What was
that for?” she demanded, as her hand moved behind her to rub the spot.

“Because, my
love, you are screwing with my schedule.”

“Oh, I thought I
was screwing the director,” she teased as she wiggled off of him. Another
squeal came as the result of another harder swat before she could climb off the
bed. She ran to the door of the bathroom and turned back. “By the way, did I
get the part?”

His answer was
to walk towards her, his eyes roaming up and down her body. Reaching her, he
slid his hands around her waist. She melted against his chest as he bent to
kiss her. He pushed his tongue between her lips and felt hers tangling with his
and her hand dropped to encircle his cock.

Patrick pulled
back and grinned. “Hmm, you don’t seem quite innocent enough to be my ingénue,
but you’ve definitely got the part of the woman I’ll love forever.”

“That’s the only
role I wish to play.”

An hour later,
they had showered and dressed and were in the kitchen. Patrick handed her a mug
of coffee he’d made using their Keurig before making his own. When she moved to
the refrigerator and took out the carton of eggs, he shook his head.

“But I’m
starving,” she protested as he took the carton and put it back.

“Then, I suggest
you start the game.”

“You’re really
serious? I thought maybe we’d already played.” When he shook his head, she
grinned. “Since you said there are no switches, I’m game.”

“Ah, ah,”
Patrick said, shaking his finger at her. “I never said there were no switches.
I said that depended upon you. What I did say was that you will assume the role
of one of your favorite characters. I’ll also say this will be a game where you
and I will travel down memory lane.” He grinned. “Oh, and there are prizes.”