Read My Daughter, My Mother Online

My Daughter, My Mother 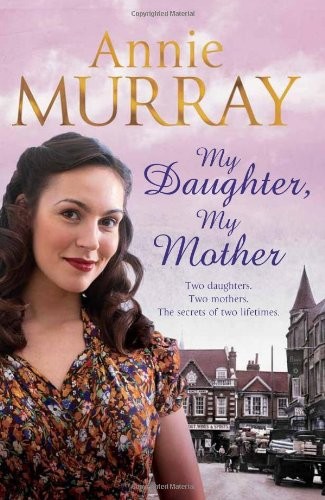 For my own mother, Jackie Summers, a great mom!

Thank you so much for everything.

Joanne jumped, her heart pounding in the violent way it kept doing these days. She had not heard the woman coming up behind her, the wheels of her child’s buggy gliding across the dark-green lino.

In a moment of panic she realized she could also not remember anything about how she had got here herself, how she came to be peering through the reinforced glass window in the door of the church hall, her hand gripping the handle of Amy’s buggy. Had she been here long? She had no idea.

The woman behind her was white-faced and plump, with jaw-length hair. She wore glasses in big red frames and a baggy purple T-shirt over a long denim skirt. In the buggy a dark-haired boy of about two was wrestling to get out.

The hall was strewn with toys and chaotic with the movements of small children. Some were pursued by their mothers, while other women stood talking in clusters at the edges.

The first time Joanne had come, a fortnight ago (she had had to miss it last week, the state she was in), she had mistaken the time, come just after ten and found the hall almost empty. Only Tess was there, the woman who ran the group, carrying toys from the storage cupboard at the back and arranging them round the hall while her little boy ran up and down.

It was Tess who had given Joanne the courage to come back to the toddler group. Tess was freckly-faced with curly, straw-coloured hair tied up in a ponytail and had a kind, friendly way about her. She was carrying six months of pregnancy around in a pair of bleached denim dungarees with a bright-orange T-shirt underneath and purple desert boots.

She had seemed to sense how nervous Joanne was and spoke gently to her.

‘It can be quite hard at first,’ she said, then laughed. ‘As if everything about being a mother isn’t hard at first! But I sometimes tell people it might be better not to come until their children are already sitting up. Your little one’s already on her feet, though, isn’t she? So that’s fine.’

She had smiled at Amy, who was in her buggy, sucking on a bottle of juice and watching everything with her huge blue eyes.

This kindness brought Joanne close to tears. She had felt a kind of adoration for Tess from that moment. Together they set up the rest of the room, and it had felt good to be involved. She had wanted to come back last week, but her mouth had been so swollen and the cut he had given her kept splitting open. She had been too ashamed to go out.

Today, though, it was all already in full swing – all the toys in use, a corner for painting, another for play dough (made at home by Tess), and even a little plastic pool on a table for water-play. Amy was squeaking with excitement.

‘Out!’ she insisted, tugging at the straps.

Joanne was glad to have Amy to deal with, as she felt shy and awkward among the other women. Some of them seemed so confident, as if they’d been mothers all their lives.

Unstrapping Amy, she kissed the top of her head, feeling her warmth through the cap of blonde hair. But Amy was in a hurry and jerked her head, banging against Joanne’s lip where it had almost healed, so that her eyes filled. Faintly she tasted blood again. For a second it felt unbearable, like the last straw.

Amy headed straight for the painting table where one of the helpers, a cheerful young woman called Mavis, put a plastic overall on her.

‘There you are, love. You can go and paint your masterpiece now, can’t you?’ she said, in warm Jamaican Brummie.

‘Thanks,’ Joanne mumbled. Amy looked lovely in the bright-yellow overall. She had met Mavis last time.

‘She’s loving it, isn’t she?’ Mavis observed. She stood watching Amy, her arms folded, neat in a short-sleeved grey top and black skirt. Round her neck she wore a little gold cross on a chain. Mavis must have been younger than Joanne – only about eighteen – but she seemed very mature. And Mavis was the sort of person beside whose neat slenderness, smooth brown skin and tidy, clinging hair Joanne felt like a wayward scarecrow.

Joanne was quite tall, at five foot seven, thin and long-legged like her father. She had ample-sized breasts (that was good), but otherwise she felt gangly and as if everything was bulging out in all the wrong places, especially now she’d had Amy. In the past Dave had always told her she was imagining it: ‘You’ve got a great figure. That’s the trouble with you girls – you’re never satisfied.’ That was the old Dave, who had loved her body, her pink-cheeked complexion and wavy brown hair; that was before he turned sour and critical. Now everything about her seemed to be wrong. These days she nearly always wore jeans, ripped at the knees, her hair hoicked back in a loose ponytail. She hadn’t had it trimmed for ages – since before Amy.

‘She’ll be fine,’ Mavis told her. ‘I’ll watch her for a few minutes, if you want to go and get yourself a coffee? You know where the kitchen is?’

Crossing the hall, she saw the stressed-looking woman who had arrived with her squatting beside a pile of Duplo, pleading with her son to stop whacking another child’s head with his latest red-and-yellow creation.

‘I’m warning you, I’ll have to take you home,’ Joanne heard shrilly, in passing. ‘Look at Tom – he’s not hitting other children . . .’

There was a gaggle of young white mothers in one corner. One whom she had met last time was thin and pale, with long black hair and a baby whose father was obviously black; another, dumpy and competent, was pregnant with her third child. With them was a mother of twin boys, who was as thin as a railing, with piercings round her ears and nose, which caught the light like a pincushion. There were a few nervy, educated women who were already fretting about primary schools (something Joanne had not given a thought to); a knot of black mothers who tended to hang out together; Mavis, who was hoping to move on to a career in childcare; and Tess, who sailed like a calm, reassuring ship among them all, spreading goodwill.

A couple of the West Indian mothers were in the kitchen, one arranging biscuits on a plate, the other pouring squash into little plastic beakers. They were busy chatting, so Joanne made tea for herself. Drinks were to be kept in the kitchen, away from any risk of scalding the children.

She took a few sips of her sweet tea, leaning against the kitchen doorframe, hugging the warm mug to her chest. Amy was still deep in her picture. Toy cars skittered across the floor. Joanne watched the groups of women talking.

I must make sure I get home on time, she thought. Her heart began racing again, with that sick thumping. He might come home to check up on her. It was never far away: every few minutes the thought of home came to her, and Dave. It had crept up on her, the way she was always waiting for something to happen now. Even in her sleep.

The main door opened and in came another buggy, pushed by the Asian girl whom she’d seen here last time. Joanne had been surprised. She didn’t think Asians would come to these groups – not in a church. Wasn’t it against their religion? She hadn’t spoken to her, and the woman had seemed a bit left out. She looked very young, was fine-boned, delicate, and had a tiny daughter with huge eyes and a head of thick, wavy hair.

The Asian girl was lifting her daughter out. Joanne frowned, narrowing her eyes. It was the same girl, wasn’t it? She certainly recognized the child. But there was something very different about her mother. It took her a moment to realize. Last time the girl had been wearing jeans and a T-shirt. Joanne remembered how its vivid yellow had flattered her, her long plait swinging darkly against it at the back.

This week the back of the girl’s head was covered by a thin scarf. She was dressed in one of those Asian suits, baggy trousers and long shirt, all in a pale mauve, edged with gold. It made her look different, and Joanne found it puzzling. Wasn’t she expected to wear one kind of clothes or the other? The Muslim girls at school, like her friend Mevish, had always dressed much the same: trousers under skirts, and scarves.

She rinsed out the cup and returned in time to find Mavis lifting the overall off over Amy’s head.

‘We’ve had enough of painting,’ she said. ‘There now, and what a lot you’ve done – look, three pictures! I’ll peg them up on the line.’

Along the wall behind her exhibits with paint running down them were pegged along a piece of string.

Amy was already trotting across the room towards the pile of Duplo, and Joanne followed and knelt beside her, glad to feel useful at last. Beside her was the mother with the long black hair, who barely glanced at her.

A moment later Joanne felt something pushing in between the two of them. A pair of tiny brown hands appeared, then a face, as if the little girl was tunnelling her way in to get to the toys. Joanne leaned over to let her pass, and a moment later the child was absorbed in building something. She was wearing pale-blue trousers and a sugar-pink shirt.

‘Sorry – did she push in?’ Joanne heard a high, soft voice and turned to see the young Asian woman.

The Weightless World by Anthony Trevelyan
Third Degree by Maggie Barbieri
Where Have All the Bullets Gone? by Spike Milligan
Microsoft Word - BETROTHED.docx by Noah
Vicar's Daughter to Viscount's Lady by Louise Allen
One in a Million by Jill Shalvis
The Proposition 2: The Ferro Family (The Proposition: The Ferro Family) by Ward, H.M.
The Best Place on Earth by Ayelet Tsabari
Promised to a Sheik by Carla Cassidy
All He Ever Needed by Shannon Stacey