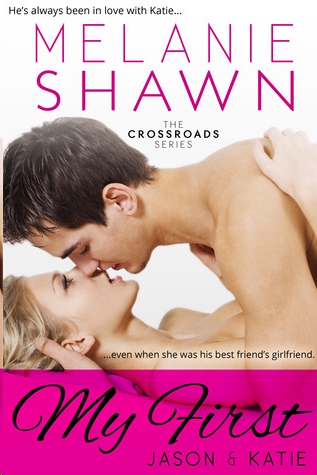 Other titles by Melanie Shawn

“Welcome home!” Katie said sardonically to herself as she sat, eyes closed, in her rental car on the side of Highway 90. She had a paper bag pressed tightly against her mouth and a mantra running through her brain on repeat.

Katie had been back in Illinois for less than two hours and here she was, smack dab in the middle of her first panic attack in eight years. She gripped the steering wheel hard, tried to soothe her racing heart, to anchor herself to reality. She forced her movements to be slow and deliberate.

'This seems to be working, albeit slowly,' she assured herself. When the overpriced therapist who had taught her the breathing exercise and suggested the mantra had laid out his plan, Katie had wanted to roll her eyes. She had wanted to tell him that he clearly had no flipping idea what a panic attack really felt like if he thought that repeating a little magic spell about breathing inside of her head was going to have any effect at all. She had wanted to tell him that panic attacks didn't feel like nervousness, for God's sake, or butterflies that you could just calm with the power of your flipping mind. They felt like having a heart attack, like you were dying, and have you ever heard of someone having a heart attack curing themselves by simply telling themselves to BREATHE?

Of course, Katie hadn't said any of those things, she had smiled politely, practiced with the bag and kept her judgment of his professional aptitude (i.e., that he was a total quack!) entirely to herself.

Still, since she hadn't had a panic attack in the past eight years, she hadn't ever gotten to test out the technique and prove his quackitude with rock solid evidence. Now that she was in the middle of one, and the exercise actually seemed to be working?

Well, I'll move his status down to 'Jury's Still Out on the Level of His Quackosity' but I'm not nominating him for the Nobel Prize just yet, Katie thought cynically.

The panic attack was subsiding, but Katie was still feeling some of the physical symptoms. Her head felt as if it were floating away, her fingers were tingling as if they were being stabbed by a thousand tiny needles, and she was being bombarded by an obnoxiously loud ringing sound. She forced herself to anchor to the sensation of the paper bag around her mouth
to ground her in reality, and repeated the mantra (which, she had to admit, was kind of growing on her...)

Slowly, bit by bit, she drifted back to the present and into her body. She closed her eyes to appreciate the little sensations that she was now aware of - the leather of the seat pressed cold against her back...the icy breeze from the air conditioning blowing refreshingly on her face.

She was aware of the weight of her chest rising and falling. Her arms felt heavy. Lowering them to her sides, Katie was vaguely aware that the paper bag had slipped from her hand and landed on the console beside her.

Her breathing had returned to normal, and the ringing sound in her head had grown sporadic. She searched her memory in an attempt to identify if ‘sporadic ringing in the head’ was a normal side effect post-panic attack. She hated that these horrible attacks used to occur with such frequency that she actually HAD a personal database of experiences to check her symptoms against.

Nope, she concluded, the sporadic ringing is new.

Turning her head to take in her surroundings, she saw cars whizzing by on the interstate. She squinted against the glare of the sun, which was shining brightly down on the pavement and bouncing off of the car windshields speeding by.

Katie retrieved the paper bag and folded it up, returning it to her purse. She didn't LOVE the thought that she might need to keep it handy for future use, but better safe than sorry. I mean, let's be real, she told herself. You're twenty minutes off the plane and barely starting down the highway toward Harper's Crossing and you had a panic attack. You really think you're getting through the rest of the weekend unscathed?

As she placed the paper bag inside her gigantic 'in case of emergency' carry-on bag, she discovered the source of the ringing.

She felt like an idiot. On the good side, she told herself, is the fact that I don't have to add Tinnitus to the looooong list of symptoms which characterize my flipping panic attacks. On the bad side? Apparently I now no longer recognize my cell phone's ring tone.

Picking up her iPhone, she swiped the screen to answer, saying warmly “Hey Sophiebell!”

“Katie where are you? I thought you would be here by now. Did your flight get delayed? I can’t wait to see you,” Sophie squealed, the words tumbling out of her mouth, one over another. Katie smiled to herself. She had always thought that Sophie could paraphrase that old Army motto to adopt as her own, 'I say more before 9 am than most people say all day!'

“The flight was fine. I am on my way, and I will be there in twenty minutes, Sophiebell. I can’t wait to see you, too!”

“Okay, hurry,” Sophie pleaded, but then followed it up with the command, “but drive safe!”

“I will. See you soon, doll!” Katie tried to cover the stress in her voice with ebullience as she said goodbye and hung up the phone.

It's 8:30
a.m. on Thursday morning, she told herself, repeating the mental math to herself. My return flight to California is at 7:00 p.m. Sunday night. All I have to do is get through the next four days (preferably without having a nervous breakdown!) and then I can wing my way back to my lovely, safe, predictable life in San Francisco.

It had been ten long years since Katie Marie Lawson had set foot in Harper's Crossing, the town of her childhood and her youth, the town that was in many ways responsible for making her the person she was today. It was definitely rife with memories, both beautiful and dangerous.

There were so many things about Harper's Crossing that Katie had buried deep inside, and sometimes she wondered if she had buried the good along with the bad. She could already feel the effervescent rising of those memories to the surface, and she worried about what would happen if only the dangerous memories came up, with none of the beauty to temper it.

But, she had to keep reminding herself, this weekend wasn’t about her, it was about little Miss Sophie Hunter, who was getting married to Bobby Sloan, Jr. the youngest of the five Sloan boys. Sophie had called her, ecstatic, three months earlier to announce her engagement to Bobby and to ask Katie to be her maid of honor.

Katie breathed out a sigh as she pulled back onto the highway. Nothing short of the apocalypse or her beloved Sophiebell's wedding (the two events which anchored the opposite sides of the 'cosmic scale of awful to wonderful possible events' in Katie's mind) could have brought her back to the apparently panic attack inducing town that had raised her.

Sophie (or 'Sophiebell' as Katie had called her since Sophie was six and decided that she was Tinker Bell) was the closest thing Katie had to a sister.

Katie was an only child. She and her
mom, Pam, had gone to live with her Aunt Wendy in Harper’s Crossing when Katie was four, immediately after her parents divorced.

Craig
, Katie’s dad, had come to visit his daughter exactly one time since she moved to Harper’s Crossing. It was one month after she and her mom had arrived that Craig had taken Katie to Tasty Treats for a double scoop of mint chocolate chip ice cream.

He had talked about how much he loved her and assured her that the divorce and the move had nothing to do with her. He had also promised to see her once a month…suffice it to say, he didn’t keep that promise.

Katie had not seen her father since that cold October Saturday, 24 years ago.

Growing up, she had always just assumed that he had stayed away because he and Aunt Wendy “did not see eye to eye” as Katie’s
mom always said (although, now, as an adult, she was leaning toward the theory that it was because he was a shitheel).

She never really missed her d
ad. Sometimes she would miss her idea of what having a dad in her life would be like. But never the man who had fathered her, she really never knew that man, and what she had known, had been unpredictable. Promising to come visit her once a month and then never showing hide nor hair of himself ever again really just seemed par for the course where he was concerned. It was just the last in a long line of broken promises that had characterized their father-daughter relationship, and – even at four years old – Katie didn't remember being terribly surprised when the months rolled around and he didn't.

She had always credited the fact that she didn't miss him terribly to how full her life had been, how utterly surrounded she was by people who loved her. Although she would sometimes get lonely in Aunt Wendy’s house. Aunt Wendy had a full time job and Katie's mom usually held down two jobs just to make ends meet, so there was a lot of time that Katie was alone with her just her imagination and books to keep her occupied.

But, oh boy, how that had changed the summer before Katie’s 7th grade year!

That was the summer that Sophie Hunter (AKA Miss Sophiebell) had moved into the house next door to Aunt Wendy. And right away – literally, Katie thought, starting immediately on moving day – Sophie had become Katie's shadow. Not that she minded or anything! Katie loved finally having someone, anyone other than a doll, to dress up and play tea party with.

Sophie’s dad, Mike, was a fireman and her mom, Grace, was a nurse. Katie babysat for Sophie when Mike and Grace's shifts overlapped. Katie’s house felt a lot less lonely with a bouncing, laughing, full-of-life four year old in it. But Sophiebell wasn’t the only distraction that the Hunters brought with them when they moved to Harper's Crossing. They also brought Nick, Sophiebell’s older brother and Katie’s first love.

Nicholas Hunter was three months older than Katie and he never let her forget it. He had sandy blonde hair and the most beautiful green eyes Katie had ever seen.

The day before school started in seventh grade, two weeks after the Hunters had moved in, Nick came to Katie’s door to get Sophiebell for dinner. She'd never forget that day. Before he left the porch he looked over his shoulder, his green eyes sparkling in the sun. They were even extra green due to the fact that he was wearing his favorite Fighting Irish t-shirt. SWOON!

He had asked, “Hey, do you think you would want to be my girlfriend? It’s a lot easier to start a new school when you already have a girlfriend.”