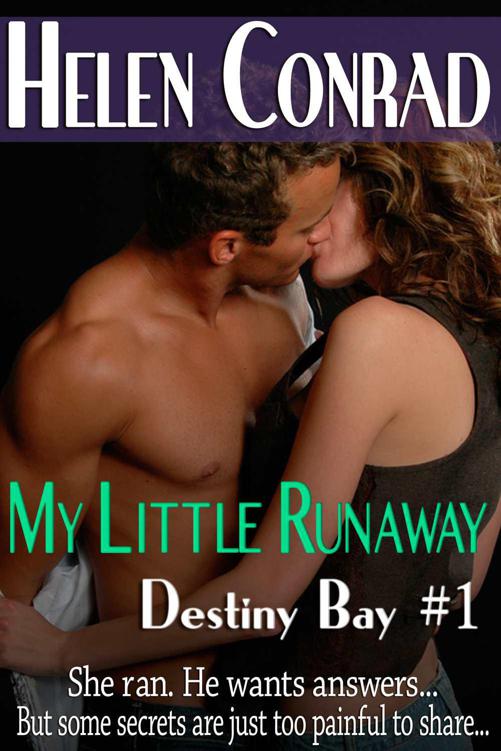 This novel is a work of fiction. Names, characters, places and incidents are products of the writer’s imagination or have been used fictitiously and are not to be construed as real. Any resemblance to persons, living or dead, actual events, locales, or organizations is entirely coincidental. All rights are reserved. No part of this book may be used or reproduced in any manner whatsoever without written permission from the author.

But some secrets are just too painful to share.

Jenny jumps out of airplanes in order to block out the painful memories of what made her run away from her family.

Reid wants to fix the damage.

The only problem is, he doesn’t know how deep it is, and how impossible it will be to cover over.

Will his intoxicating love tempt her to risk it all again? Or will it end up making everything worse after all?

Book 2-Wife For a Night

Book 3-Too Scared to Breathe

Book 6-Not the Marrying Kind

Reid Carrington
~ambitious attorney determined to restore the reputation of his family after his father’s scandal almost ruined them.

Jennifer Thornton
~grew up next door to the Carringtons, but left in order to save her parents from heartbreak.

Reid brings her back to face a reality she’s not sure she can live with.

Matt Carrington
~has been gone for years after a rift with his father sent him into undercover work in Los Angeles.

He now owns hotels in Hawaii.

Grant Carrington
~always a rebel, Grant went against his father’s plans for him and became a race car driver whose championship career is now in jeopardy
.

Tag Carrington
~their cousin, younger and more adrift, he lives mostly on his boat and avoids all risk of becoming a responsible adult.

Mickey Adams
~owner and proprietor of Mickey’s on the Bay, a local café where the Carringtons tend to hang out.

She’s in love with Tag but can’t admit it, even to herself.

Jennifer froze and forced her gaze back from the open doorway of the little airplane.

“Why not?” she asked the tall, dark-haired man seated next to her, trying not to let fear sound in her voice. “Isn’t that where I’m going?”

He threw his head back and laughed, the epitome of utter confidence. “Wait until you’re hanging out there under your canopy,” he advised. “Then you can look around all you want. But until you get out of the plane, you don’t want to be reminded of how far it is to the ground. You just might not be able to make the jump if you look.”

Jennifer tried to grin, hoping she didn’t look
quite the death mask she felt like.

“I’ll make the jump, Eddie,” she promised faithfully. “Have I failed you yet?”

He reached out and squeezed her hand. “Never,” he agreed. “Though it did get a bit dicey that time on the Colorado River when the whitewater got a little rough.” He smiled at her. “But you hung in even then, green as you were.”

“Green!” She still got a queasy feeling even thinking about that horrible day. “I felt like chopped spinach. Very old and moldy chopped spinach.” She shuddered. “But I stayed with my kayak, and I’ll do this, too.”

No matter how scared I am
, she added silently to herself.

“Here we go,” the jumpmaster called back to the four passengers. Each of them was fitted with a parachute and crouched, waiting by the open door of the plane. “Target below.”

Jennifer’s stomach flip-flopped, then somersaulted again. Her icy fingers felt useless. How was she ever going to pull the line to activate her reserve if her main didn’t open? She closed her eyes, gave herself a quick mental kick in the pants, then rose to meet her fate.

“Those of us about to die salute you,” she mumbled to herself.

“What?” Eddie asked, but she shook her head and followed him to the takeoff position by the door.

“Out you go,” Eddie ordered, his hand firmly against the parachute on her back, and she stepped out onto the platform under the wing, gasping as the wind hit her face.

She was moving in sheer terror now, a numb white void in space. If she lived through this, she would never, never do it again!

“Go!” he ordered, and she didn’t think but obediently stepped back and away from the wing, just as she’d been taught in ground school.

She felt as though her nerves had been stripped away in one long, screaming instant. Then the static line automatically pulled the ripcord on her parachute, just as she’d been promised it would, and suddenly, the fear was over and pure enchantment began.

She was floating like a lazy balloon. The only sound was a small rushing wind. Looking up, she could see the white canopy taut and full above her, holding her safe. Down below, the mountains rimmed a landscape stretched out like a giant game board.

All fear forgotten, she laughed with delight and found her shroud control lines, pulling first on one set, then the other, to make herself flare out and turn, a merry dance in the skies.

So this was what it was all about. This was why people loved it! It was
wonderful.
She was hooked!

The ground came closer. She could see the target area, the building and fenced-in spectators’ gallery where the small crowd of onlookers—mostly passersby who’d stopped to watch and potential jumpers trying to get up the nerve to try it—was gathered. And there were the telephone wires off by the highway. She knew she had to avoid them at all cost, along with the duck pond that ran along the side of the landing field.

She pulled on her shroud lines again. She was really getting pretty good at directing her fall. Wouldn’t it be something if she actually hit the target?

She bit her lip, concentrating hard and trying to aim. The ground was very near now. She’d have to make an allowance for wind. Pulling hard on the right shroud, she found herself suddenly caught up in a dive toward the highway. She pulled hard again, but the dive only deepened. Suddenly, the ground was there, sweeping away at a frightening rush around her, and she landed with a muddy splash.

She was up again in a flash, but the harness that attached her to her soggy parachute held her back, and she couldn’t get free.

She looked back toward the field, hoping no one had noticed where she’d landed. The humiliation! She could see Eddie landing right on target, hundreds of yards away. If only she could get out of this swamp before anyone came.

The first thing to do was release the capewells. She fumbled but found them, and they came open easily enough, then she was free.

She stumbled, trying to walk through the thick mud at the bottom of the pond and pull her soggy parachute behind her. What was light as a butterfly’s wing in the sky now felt like a lead balloon. With a tremendous effort she pulled the muddy fabric free and sank to her knees on solid ground.

Sitting down with a weary thump, she leaned forward to begin working at her boots, trying to pull them off her soggy feet.

Suddenly she was aware that someone had walked over from the spectators’ gallery and was standing near, watching her. Her head was bent over her work, but she could see a pair of highly polished shoes, attached to expensive, neatly creased slacks.

She let out a long sigh. She’d been found out. There was certainly no use trying to hide what she’d done. She only hoped there wasn’t a water lily sitting atop her muddy helmet or a water snake down her jumpsuit.

“It’s a new sport,” she said, not looking up but attacking the knotted lace on her other boot. “It’s called pond diving. I’m the world’s leading authority, as things stand right now.”

The shoes didn’t move but managed to convey an air of impatience nonetheless. The person attached to them spoke.

“Jennifer Thornton, when are you going to grow up?”

His voice was familiar enough to capture her complete attention. She gazed up at the man, but the late afternoon sun was behind him, wrapping him in a mantle of light spears. All that stood out was a set of very wide shoulders and the vague outline of dark glasses hiding his eyes.

“Who says I have to grow up?” she asked lightly, reaching under her chin to unclip the strap on her helmet, then pulling the hard hat from her head and shaking her full head of chestnut curls free. “I learned long ago that grownups never have any fun.”

She peered into the shimmering light, trying to see his face. That voice was so familiar
.

“There’s a lot more to life than fun,” he scoffed. “You must be twenty-five years old by now. Haven’t you learned that yet?”

“Twenty-six,” she corrected automatically. She knew who it was now. Leaning back, she let loose the natural smile that so many called irresistible.

“Reid Carrington,” she said slowly. It had been a long time since she’d said that name aloud, but she’d never forgotten it. A bubble of happiness rose in her throat. “You always were trying to teach me something, weren’t you?”

“Was I?” He stepped closer, and she could see the outlines of his handsome face. “The way I remember it, you were the one trying to teach me.”

Despite herself, Jennifer blushed, then bent to hide her smile. If he was going to bring up the embarrassing way she used to chase him when she was a kid, she’d deny everything.

What a crush she’d had! Every summer, she’d spent the long, lazy days mooning over the handsome older boy next door. She must have made his life miserable.

“It has been a long time,” she said softly, wishing she could see him better. “Seven years.”

“You look the same.” His voice had a curiously flat sound, and she frowned, wondering why. “Just the same.”

Unexpected Dismounts by Nancy Rue
Delia’s Crossing by VC Andrews
Benchley, Peter by The Deep [txt]
Soulrazor by Steven Montano
If Nuns Ruled the World by Jo Piazza
Lost and Found by Nicole Williams
The Achilles Heel by Karyn Rae
Pilgrims of Promise by C. D. Baker
The Face of Death by Cody Mcfadyen
Creole Belle by Burke, James Lee