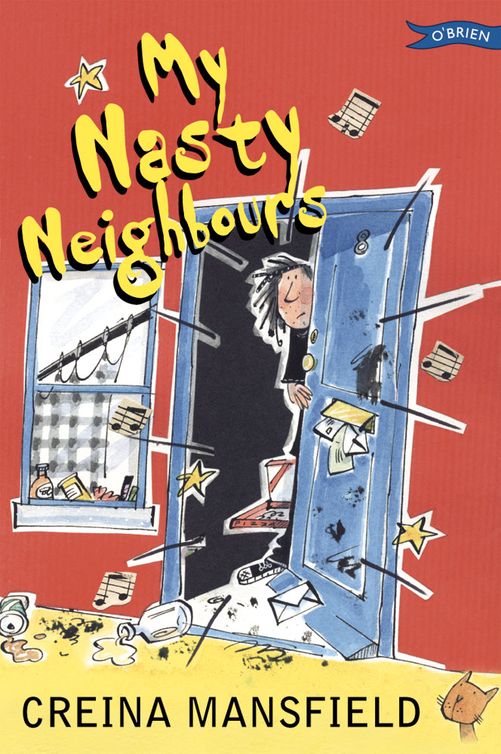 ‘I laughed so much I got the hiccups’
THE IRISH TIMES

WHAT THEY SAID ABOUT
Cherokee

To Bob, with love

Beauty is Only Skin Deep
…

… and So is Ugliness

Plans are Drawn Up

Another Hero and Another Win

T
here should be a law against people talking to you when you’re trying to watch TV.

I’d just settled on my sofa when Mum began. ‘David, I have a distinct memory that twelve years ago I taught you to walk! All you seem to do nowadays is lie on that sofa and gawp at the television set.’

Notice that word ‘gawp’. I gawp; you watch; they view. Mum was rattled, and I wasn’t going to get any peace.

I patted the cushions around me. I like six for complete comfort – three under my head, one under my left elbow and two propping up my feet.

‘I’m just relaxing,’ I pointed out reasonably. ‘I am allowed to relax, aren’t I?’ There is no point sitting up to watch television when you can lie down.

And I was just in from rugby practice so it
wasn’t as if I hadn’t had any exercise. Take it from me, I am definitely the fittest member of the Stirling family, made up of Mum, Dad, my brother Ian, and sister Helen and myself! Mum and Dad look like Tweedledum and Tweedledee. Ian’s the original eight-stone weakling and although Helen makes a big deal about keeping fit – she puts on a leotard, trainers and a sweat-band to lift three-pound weights – I can still pick her up and put her on top of the wardrobe when she annoys me. At my school, St Joseph’s, the three Rs aren’t Reading, ’Riting and ’Rithmetic but Rugby, Rugby and Rugby. I’ve played since I started at St Joseph’s at the age of seven and I’d just got a place on the A side.

So after lunch on that Tuesday I battled for every minute of the hour-long practice. I was thumped, winded and booted in the ribs; I deserved some peace and entertainment. I wanted to watch ‘Gladiators’ which I’d videoed from the previous Saturday. Mum obviously had other plans.

She padded through to the kitchen in her boat-like sheepskin slippers, still complaining,
but I could tell that she was just taking it out on me for something either Helen or Ian had done. Being the youngest member of the family I’m the punch-bag for the other Stirlings to hit at. Luckily I’m also the biggest member of the family.

‘What’s up?’ I called out, planning to follow up this sympathetic question with an order for hot buttered toast. Fortunately the roars of the ‘Gladiator’ audience drowned out most of Mum’s moaning.

‘Any chance of a cup of tea?’ I went on. Wolf was in good form. It took him just five seconds to whack his opponent off the pedestal. I wouldn’t mind having a go at that, preferably with Ian as my opponent.

There was a time when Ian had seemed perfect. He’s blond and when he was a kid he had the angelic sort of looks that adults like. A fresh, open expression like a cherub.

And if he’d whipped out a small harp and begun playing, nobody would have been surprised. He was always musical. I can’t remember a time
when he wasn’t playing at least two musical instruments. He was already playing the violin at four years old when I was born – and I bet he didn’t even stop playing to say hello. By the age of six he was playing the piano as well. He’s got a great singing voice too, so he won a scholarship to St Patrick’s which has a choir for the cathedral.

By my age he had the best voice in the school, which probably meant one of the best voices in the country and he sang solo in the cathedral services. The choir even made a record with Ian singing ‘Ave Maria’.

Mum and Dad always talked about him having a career in music and it looked as if they were right, but not in the way they intended.

‘What? What?’ Mum stomped through. ‘He’s like a stranger,’ she said. ‘A hideous, intrusive stranger.’

Well, he could hardly be expected to look like Little Lord Fauntleroy all his life, I thought, but I gave Mum a sympathetic nod and asked, ‘Got any hot buttered toast?’

Mum gave me a fierce look and went back
to the kitchen. But she kept on complaining, ‘… playing that dreadful racket all through the day when he should be studying.’

When Ian was fourteen, his voice started to break which meant he couldn’t control the sounds he made and he would squeak and grunt when he was singing. Mum, Dad and the school knew this would happen eventually and anyway Ian was now playing the violin and piano brilliantly. He got top marks in his exams accompanied by comments like, ‘an exceptional talent – wonderful!’

So when he asked for a drum kit for his fifteenth birthday, Mum and Dad were shocked.

‘You mean you want to study percussion – in an orchestra?’ Dad asked hopefully. He could boast to his fellow civil servants in the Data Protection Commission about that.

Nevertheless Ian got his drum kit. The walls shook as he practised. It was impossible to watch
television, study, do anything when Ian was playing. Our house, 11, Elm Close seemed to be suffering its own localised earthquake.

He formed a group called the Oily Rags and, as Dad put it, ‘promptly started to look like one’. He wore greasy black clothes, his face became a mixture of bristles and spots and he wore a razor blade in his left ear.

‘I know what I’m doing,’ was Ian’s usual reply to Mum and Dad’s complaints that he was ruining his brilliant future.

‘… thinks he’s going to be a big rock star.’ Mum’s voice increased in volume as she thrust a plate of hot buttered toast into my hands.

Perhaps she was trying to drown out the noise from Ian’s bedroom, where the house of Heavy Metal was tuning up, with a clash of cymbals and a drum roll.

I turned up the telly and rewound the video. I wanted to watch again that bit where Wolf hammered his opponent across the head and shoulders.

That’s the great thing about TV – it lets you escape from the harsh realities of life.

Beauty is Only Skin Deep â¦

T
hree cups of tea later and I was heading upstairs to the loo. This was when having one bathroom and a sister like Helen became a real liability. She was training to be a beautician which meant she âstudied' things like cuticles and revised eye-lash tint.

The door was locked. I heaved my right shoulder against it and yelled over the noise of Ian's drums, âHelen, come out! I need to go in there!'

Silence from within, apart from the slight sound of someone moving beauty products about. My eighteen-year-old sister has simple looks â long, blond hair, blue eyes and a figure like those âBaywatch' girls. And at least she was getting qualified, and, with Mum and Dad qualifications
are a must. A fully qualified contract killer would be better than an unqualified genius who played for Ireland and painted masterpieces on his day off. But Helen's career choice was still a disappointment. There'd been huge rows about it.

âYou're passing up an opportunity I would have died for!' Dad kept saying. He was really clever at school, had won the Literature Prize every year, Gran kept on (and kept on) telling us â but there'd been no money for university. Now his daughter refused to go.

I hammered on the door again. âHelen, hurry up! What are you doing in there?'

âSkip the last dozen products and Get Out Here!' I yelled.

About eighty products have to be applied daily. They fill our one and only bathroom and it takes so long to apply all these creams, gels, mousses, sprays and lotion that Helen's ready to start taking them off just after she's finished putting them on.

Mum called from the bottom of the stairs,
âWhat's going on?'

Mum came up the stairs and knocked on the door. âHelen, show some consideration for others, please!'

âWhich two minutes?' I asked gruffly. âOne minute now and another in an hour's time perhaps?'

Mum got wild and hammered on the door too, shouting, âBeauty is only skin deep!'

The door opened and Helen glided out. As I rushed in I heard Mum interrogating Helen about her date that evening.

âWho is he? Where did you meet him? Do we know him?'

Helen remained calm until Mum asked âWho do we know who knows him?'

âMum! How should I know? What do you want â references?' she said sharply and slammed her bedroom door.

Mum sloped off down the stairs. âI'm just concerned for you, darling.'

I looked into Helen's room. She was painting her nails. âAre you going for a meal?' I asked.

âWhere's tonight's dream date taking you?' I asked enviously. Helen specialised in boyfriends with fast cars and large wallets. So it would be somewhere with great food and Helen would eat about three carrots and one bean. Food was wasted on her. I wished we had a dog so I could persuade her boyfriends to bring back doggy bags. Silver the cat never got offered anything.

âGet him to try that new place in Rathmines!' I shouted, as I headed downstairs to the kitchen. Just the thought of all that food made me feel hungry.

âWhat a waste!' I muttered.

Mum misunderstood me. âOf a wonderful mind,' she added, shaking her head. âHelen got the second highest marks ever in Ireland in her Leaving Cert Latin exam,' she told me. âEver,' she stressed. âIn the whole country.'

I took a packet of biscuits. âYup! Remind me to tell Harry that when he turns up,' I said,
heading back to my TV. âThat'll impress him.'

The South Will Rise Again by Jeffrey Kosh
The Translator: A Tribesman's Memoir of Darfur by Daoud Hari
A Shred of Evidence by Jill McGown
The Reaping by Annie Oldham
The Norman Conquest by Marc Morris
Hunted (Reeve Leclaire 2) by Norton, Carla
F in Exams The Very Best Totally Wrong by Richard Benson
The Third Child by Marge Piercy
Tommo & Hawk by Bryce Courtenay
Sense of Wonder: A Century of Science Fiction by Grossman, Leigh