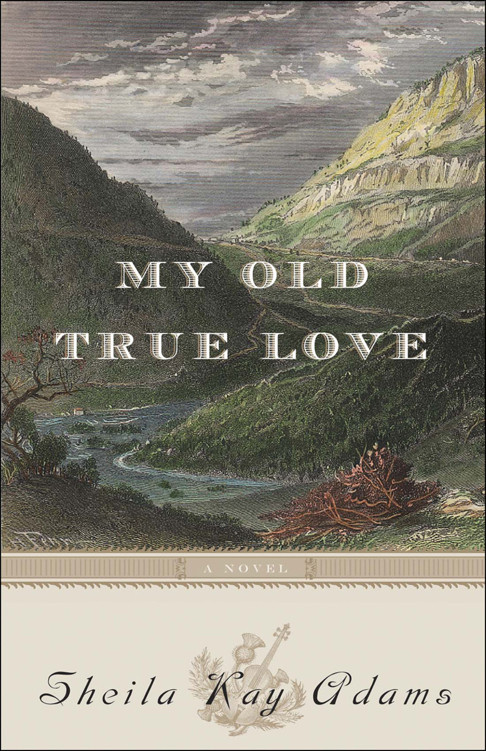 “As passionate and eventful as an Irish ballad.”
–The Atlanta Journal-Constitution

“I laughed, I cried. I felt everything I remember feeling as a child.”
–Dolly Parton

“Sheila Kay Adams can write the bark off a tree. . . . [Her] intimacy with mountain culture ranks with that of Lee Smith.”
–The Roanoke Times

“Deeply satisfying storytelling propelled by the desires of full-bodied, prickly characters set against a landscape rendered in all its beauty and harshness.”
–Kirkus Reviews

“Adams can make you laugh. And she can make you clear your throat and wipe at the corners of your eyes from emotion. This is no small thing. She has the gift.”
–Chattanooga Times Free Press

In tones as warm and rich as the sun shinging on his Appalachian home, Larkin Stanton sings the country ballads of his heritage. Even before he could talk, Larkin would hum along with his Granny as she warbled. And though orphaned at birth, Larkin was never alone–born as he was into the clannish, protective Scottish community of the North Carolina mountains in the 1840s and placed under the care of his silver-tongued cousin Arty.

As he grows, Larkin feeds on the subtleties of singing. When he goes head-to-head with his cousin Hackley, their ballad contests produce songs that bring a lump to the throat. And as the boys mature, their competition spreads to the wooing of Mary, the prettiest girl around. But shortly after Hackley wins her hand, he must fight in the Civil War. Left behind, Larkin finds himself inexorably drawn to the woman he has always loved. And what he does next will live on in the mournful ballads of his hills forever.

This is a work of fiction. While, as in all fiction, the literary perceptions and insights are based on experience, all names, characters, places, and incidents are either products of the author’s imagination or are used fictitiously.

This book is in loving memory of my parents
Ervin and Neple Norton Adams, who kept the family stories
and memories in their hearts and passed them on to me.
And it is lovingly dedicated to June Anders and
James C. Taylor—there could be no better in-laws.

S
OME PEOPLE IS BORN
at the start of a long hard row to hoe. Well, I am older than God’s dog and been in this world a long time and it seems to me that right from the git-go, Larkin Stanton had the longest and hardest row I’ve ever seen.

Granny had an old cow that was skittish back then that would kick anybody but her, so I knowed things was bad when she said to me, “Arty, go do the milking.”

My heart laid in my chest as heavy as the milk bucket on my way back. See, my aunt Polly had been trying to have a baby for days and had screamed till her voice had plumb give out. I heard Mommie crying when I started up on the porch and just as I reached for the latch, the door opened and the granny-woman Hattie come out. She had a bright red stain on her forehead and try as I might I couldn’t get my eyes to look nowheres else but at that red swipe mark. She never even had to say it. I knowed Aunt Polly was dead. Hattie’s eyes was soft as a doe’s as she took the bucket of milk and handed me the one she’d carried out of the house and told me to empty it at the far edge of the cornfield. Oh, Lord, I did not want to see what was in that bucket, but just like that red stain, I could n’t
look nowheres else, and I gagged the whole time I was burying the afterbirth.

Even though they was a candle burning on the rough-planked table inside the cabin, it seemed dark to me. But there was that bucket of milk, and since they was all talking, I figured it fell to me to strain it. I kept looking at the bed where Aunt Polly was covered up by one of Granny’s best quilts. It seemed like the gay colors caught what little light there was and I got sick to my stomach thinking about what lay beneath them. Mommie and Granny stood next to the bed and Mommie was still crying. Crazy-like, the words to an old love song run through my head.

The doctor he come, to her bed he drew nigh

Her chambers all parted and moved to the side.

And quick as lightning, another line from another song.

Granny’s face was so full of sorrow and hurt that I could barely stand to look at her, and I busied my hands to straining the milk. But that didn’t stop my ears from hearing every word. In the softest voice ever was, Granny allowed as how Aunt Polly had plumb give up after Luke was killed. Mommie was holding Emily who had cried so long she had the snubs. Hackley had his fists twisted up in her skirt and when she started to say over and over, “My baby sister, my baby sister,” he pushed his little face deeper in the folds. Right about then the baby started to cry, and everybody turned back to the bed. I took Emily from Mommie. It was when I set her on my hip that it come to me that I didn’t even know what the baby was. But Emily was crying and fussing and Hattie was out the door and gone before I had a chance to ask.

Then Mommie said, “I’ll take him,” and Granny said, “No you will not.” They quarrelled back and forth for a minute, then Granny said, “Thirty-five ain’t young, honey. Ye’ve got eight young’uns and, God willing, soon to be nine. Ye have to think of your own.” And what she said next caused a chill down the whole length of my back. “I’ll keep him.” And then her voice got real soft. “Till he dies, anyway.”

Mommie’s voice come out in a wail. “We can’t let him die. He’s all that’s left in this world of Polly and Luke.”

Granny held up her hands and said, “All right, all right.” Then she said one of us needed to go to the spring and bring back water to wash Aunt Polly with before she stiffened, and my eyes flew back to the bed. I felt all done in and Emily was still making this tired little hiccuping sound like she wished she could stop but kept on anyway.

Mommie folded back the quilt from Aunt Polly’s face. She tucked a strand of hair still wet with Aunt Polly’s living sweat behind one ear.

“She looks young as a girl,” she whispered.

Oh, but I thought I would die when she said that.

Then the baby cried again and Mommie got the funniest look on her face. Her chin jutted out, her eyes went to little slits, and she looked mad as hell. “Come over here, Arty,” she said to me in a rough voice. She jerked Hackley loose from her dress skirt and knelt by the bed.

“That there is your cousin,” she said. “He’s ours to raise. He ain’t got nobody in this world but us.” Hackley made a little sound in the back of his throat and Mommie looked right at him. “He’ll need a good strong name, now. You come up with a stout one, all right?”

Hackley looked at Mommie, then back at the baby. He nodded solemnly.

That must’ve satisfied her because she stood up, got the water bucket, and said, “I’m going to the spring.”

And as Granny followed her out on the porch she allowed as how Mommie ought to take the pitch torch, since dark had probably come on down at the spring.

T
HE BABY MADE ANOTHER
little sound and of a sudden I wanted to see that baby more than anything in this world. The quilt they’d wrapped him in had halfway covered his face and I leaned over and flipped it back. His big pretty head was covered in hair as black as a crow’s feather. A tiny hand with fingers all spread wide reached out to us. Hackley stared at the hand, then shot a glance at the open door where Mommie and Granny stood backlit by the yellow light of the torch. I could see what he aimed to do and any other time I’d have smacked his hand. But, I didn’t do or say nothing. I only watched Hackley’s little hand move toward the baby. Quick as a snake the baby’s fingers gripped it hard.

“Well, howdy,” Hackley whispered. And I swear, that baby turned its head toward him just like he was listening. Hackley smiled. “Howdy, little feller.”

I
T WAS A GOOD
summer for growing in Sodom, just the right amount of sun and rain. We would have plenty for the coming winter. Granny still spent a lot of time up on the side of the mountain where the garden was. With a sheepish look on her face and never quite meeting my eyes, she’d announce before the fog had even burned off that she had to go pull the biggest cucumbers or old bean vines to feed the hogs. She’d say this even though I knew for a fact she would never go in that garden with the dew still on. She’d stay gone until noontime and come in just long enough to fix us something to eat. She’d fuss the whole while about how everything in the garden was
going to come in at the same time, which I had to laugh at because that’s the way it
always
was. Then she’d head back out up the mountain, climbing hard to where the first row of corn started. She’d always stop there to bring her apron up to wipe the sweat that run off her face like little freshets, look back toward the house, then disappear in between the rows. But I could always tell where she was by the moving of the corn. And I could tell just as well when she’d leave the patch for the cool of the woods beyond, too. We’d had no fresh corn in many months, and my mouth watered at the thought of it and when she come in with the first little ears covered with watery blisters, we fell on them as though starving.

It was toward the end of August before I realized what Granny was doing. It was way up in the day and she was just heading back toward the house. She’d caught up the hem of her apron and had loaded it with potatoes. I had beat out a path on the porch walking the baby. He’d cried so much that day that even when he weren’t crying, my ears rung with the sound of it. Granny was beelining it for the steps when he started to cry again. Her head come up and she made a sudden jag toward the springhouse.

Sweet Friend of Mine (A Sweet Cove Mystery Book 8) by J A Whiting
The Music of Razors by Cameron Rogers
Where the God of Love Hangs Out: Fiction by Amy Bloom
Motown Throwdown by K.S. Adkins
Tomato Basil Murder: Book 7 in The Darling Deli Series by Patti Benning
The dark fantastic by Echard, Margaret
False Charity by Veronica Heley
Justification For Killing by Larry Edward Hunt
The Madness of Gods and Kings by Christian Warren Freed
Lei Me Down by Selena Cooper