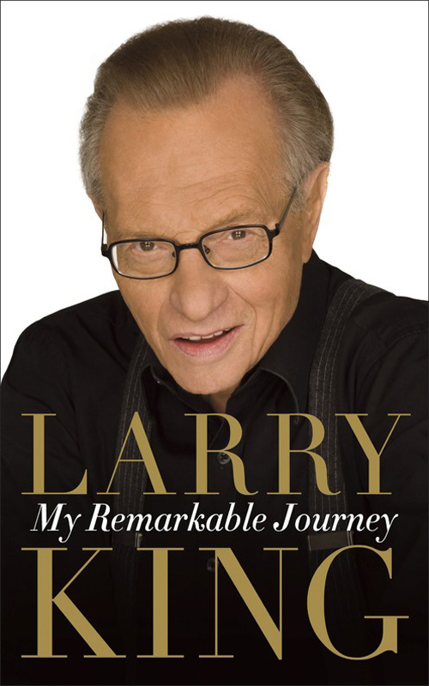 “somewhere I have never travelled, gladly beyond.”

THERE USED TO BE A BALLPARK

All Rights on Behalf of SERGEANT MUSIC CO. (ASCAP)

CRY OF THE WILD GOOSE, THE

Words and Music by TERRY GILKYSON

All rights reserved. No part of this book may be used or reproduced in any manner whatsoever without the written permission
of the Publisher.

Chapter 1: What Am I Doing Here?

Chapter 4: Home Is Where the Friends Are

To the women in my life

My wife, Shawn Southwick-King, who gets the civilian purple heart

Wendy Walker, my executive producer and, more importantly, my friend

The reason there’s nothing better than fatherhood is what it produces. In my case, it produced: Andy, Larry Jr., Chaia, Chance,
and Cannon. They are my reason for being.

M
EMORY IS FUNNY
. You can remember something that happened to you on an afternoon fifty years ago, but you forget where you had lunch yesterday.

The problem is, the longer you live, the more there is to remember. Therefore, it makes sense that you have a better memory
at thirty than you have at seventy-five. I have more than seventy-five years of memories embedded in me. Another day was added
to that yesterday. Another will be added today.

Sometimes, photographs can refresh our memories. Other times, they
become
our memories. I remember talking with John F. Kennedy Jr. about the famous picture of him as a three-year-old saluting at
his father’s funeral. He had no memory of that moment, but he knew the picture. He’d seen the picture all his life. The picture
turned into his memory.

Like photos, stories can preserve memories. But they can also touch them up. There’s always going to be some embellishment
when you tell a story. How can you not embellish? Maybe you forget what somebody said at a certain point and you substitute
a phrase that’s a little funnier. It gets a laugh, so you bring it along for the next telling. After a while, you can’t remember
the incident any other way.

So the memories on the following pages may not be exactly the way they happened. A lot of them have been preserved by humor.
But their general essence is correct.

There are times when I get a little frustrated when I can’t remember something. There’s that old joke: “I just read this great
book,
Ten Steps to a Perfect Memory
by, uhhhh…” But I never forget jokes and funny stories. Humor is the one thing I retain fully. I can remember moments that
made me laugh from the time I was a kid. And I have a feeling that humor will be the last part of my memory to go.

This may surprise you if you’ve only seen me on my CNN show. But if I hadn’t gone into broadcasting, I probably would have
become a comic. Making people laugh is still my biggest kick.

Memories are all we have. Lose them, and we have nothing. But memories touched by humor, those are the best of all.

There are other memories throughout this book. These are the memories of my family, my friends, and those who know me best.
They are sure to include thoughts about me that I wouldn’t think about myself. They’ll help you see me as a whole. I’m not
going to read these other memories until the book is published. I certainly wouldn’t want to be in the position to edit them
or tell anybody what to say.

So the funny thing is, when I pick up this book, I may be just as surprised to learn about my life as you.

Chapter 1
What Am I Doing Here?

Y
OU’D SEE ME
in a different way if you were sitting at my table at Nate ’n Al Deli over breakfast every morning. First of all, I don’t
wear the suspenders there. Second, you’d realize that I hate eggs. And third, you’d have to imagine me in a car trunk—because
sooner or later the story of the “exclusive interview of the century” would come up.

This took place a while back. There was a producer on my show—call him Bob. A good guy, but the most hyper person I’ve ever
known. One day Bob got a call from a bigwig at CNN International.

The bigwig said, “Bob! An incredible thing is about to happen!”

“What? What? What?” Bob was already on the edge of his seat.

“We’ve got an exclusive with Osama bin Laden.”

You can understand Bob’s reaction. The United States’ armed forces had been searching for bin Laden since September 11, 2001.
Television news couldn’t have landed a bigger interview unless it found talking aliens.

“It’s going to be in Pakistan.”

“Oh, and Bob, there’s one other proviso. When you and Larry get to Pakistan, you’re going to be driven to a special spot.
Then you and Larry will get out of the car. You will wait at that spot. Larry will get in the trunk of another car so he can
be driven to Osama. There’s no other way to do it. They can’t risk anyone knowing the slightest details about Osama’s whereabouts.

“Larry will do the interview. They’ll give him the tape. He’ll get back in the trunk. The car will return to you. You and
Larry will go back to the airplane. Then you come home.”

The phone call ended and Bob went berserk. As much as he wanted the exclusive of the century, he was also worried about the
ramifications.
Larry’s had quintuple bypass surgery. What if he has a heart attack in the trunk? What if they kill Larry? What if they take
Larry hostage? What if they take Larry and me hostage? But how can we pass this up?

Bob called his mother. “Ma, what should I do?”

And his mother said, “Well, how long will Larry be in the trunk?”

“They didn’t say. Just that he’ll be in the trunk.”

Bob became frantic. He was calling people left and right. He was going crazy. Couldn’t contain himself. My executive producer,
Wendy Walker, had to cut the April Fools’ Day joke short before he went absolutely nuts.

The thing is, if Bob had stopped in for breakfast at Nate ’n Al, he would’ve discovered that he had no reason to worry. George,
who sits in the aisle, would’ve set him straight. “Larry would be in the trunk before you could finish asking him if he wanted
to go,” George would’ve told him. “And I’d lay even odds that when Larry got ready to leave, Osama would get in the trunk
with him so they could keep on talking.”

That may be a little farfetched. But one thing I can tell you. If I had gotten into the trunk, I’d be in a very familiar place.
I’d be asking myself the same question I’ve been asking for the last fifty years.

What am I doing here?

Those five words sum up my whole life.

I’m telling you, there are times when my life feels like an out-of-body experience. I have to pinch myself to believe that
little Larry Zeiger from Brooklyn is being beamed 22,300 miles into space, bounced off a satellite so that some guy in Taipei
can watch me ask questions along with people in 200 other countries and territories around the world.

Was it really me, the kid who never went to college, who set up that million-dollar scholarship at George Washington University?
Who got into a traffic accident with John F. Kennedy and came to know every president since Nixon? Who had Frank Sinatra sing
to me while the two of us were alone in the greenroom? Who walked with Martin Luther King Jr. and then sat down with King’s
murderer? Who got a phone call during dinner at Mr. Chow’s in Beverly Hills from the king of Jordan? Who fathered two boys
while I was in my late sixties and watched them collect candy on Halloween dressed in Larry King masks and suspenders?

Nahhhhhh. The little Larry Zeiger I remember sat at home listening to the radio broadcast of the 1949 All-Star Game at Ebbets
Field because I couldn’t afford a ticket. How could I have walked on the field during batting practice at an All-Star Game
forty years later and been asked to sign autographs… by the players?

Come-mahhhhn, as we used to say in Brooklyn. It’s just not possible. The little Larry Zeiger who watched people crying in
the streets of Brooklyn when Franklin Delano Roosevelt died never dreamed of getting into the Oval Office. But Larry King
has been many times. Once I even sat with Hillary Clinton in the White House under a portrait of Eleanor Roosevelt. When I
casually mentioned, “Oh, yeah, I interviewed Eleanor,” it was Hillary who gasped.

Did Mikhail Gorbachev actually show up to meet me for dinner wearing suspenders? Did a college crowd in Florida actually chant
“Lar-ry! Lar-ry! Lar-ry!” when I showed up to interview John McCain during the recent presidential election? And did a Secret
Service agent really turn to me and say, “Maybe we should be protecting
you
?”

It still amazes me that my oldest friend, Herbie, and I were invited to the governor’s mansion in New York. Get this. The
butler actually came over to us and asked, “Would the gentlemen care for an aperitif before retiring for the evening?”

Aperitif ?
Who ever heard a word like that in Maltz’s candy store?

Maybe Mario Cuomo, the guy who invited us, best understood what an unbelievable ride it’s been. Once, before he presented
me with an award honoring the children of immigrants at Ellis Island, he told this story:

Somebody gave Larry King a present—cloth to make a suit. So Larry went to the tailor in Miami and asked for a suit with two
pair of pants.

So Larry went to another tailor, in Washington.

The tailor measured the cloth and shook his head. “Sorry,” the tailor said, “just not enough material here for an extra pair
of pants.”

Finally, Larry went home to his old tailor in Brooklyn.

“Sure,” the old tailor in Brooklyn said, “I’ll make you a suit with two pair of pants
and
a vest.”

“How can you do that?” Larry asked.

The tailor said, “Because in Brooklyn, you’re not that big.”

I
WAS WALKING
home from the library carrying nine books. That’s the way my memory sees it. I can’t know for sure if it was exactly nine
books. Maybe I picture nine books because I was nine years old. I’m certain that I was nine years old, because I’m sure of
the date—June 9, 1943. There were a lot of books under my arm on that summer day because I loved books. I wonder what happened
to those nine books…

There were three squad cars in front of my apartment building. Flivvers, we called them. I don’t remember exactly when I started
to hear my mother’s screams. But as I hurried up the steps, a cop quickly came down, straight for me. He picked me up and
the books went flying.

Something Like Fate by Susane Colasanti
Wild with You by Sara Jane Stone
Encore (The Black Eagles Series Book 2) by Green, Kat
Open Wounds (Damaged Souls Book 2) by Twyla Turner
Crystal's Song by Millie Gray
Office of Mercy (9781101606100) by Djanikian, Ariel
Once and Always by Judith McNaught
Beyond Death by Deb McEwan
With This Heart by R. S. Grey
A Weekend with Mr. Darcy by Victoria Connelly