Read My Side Online 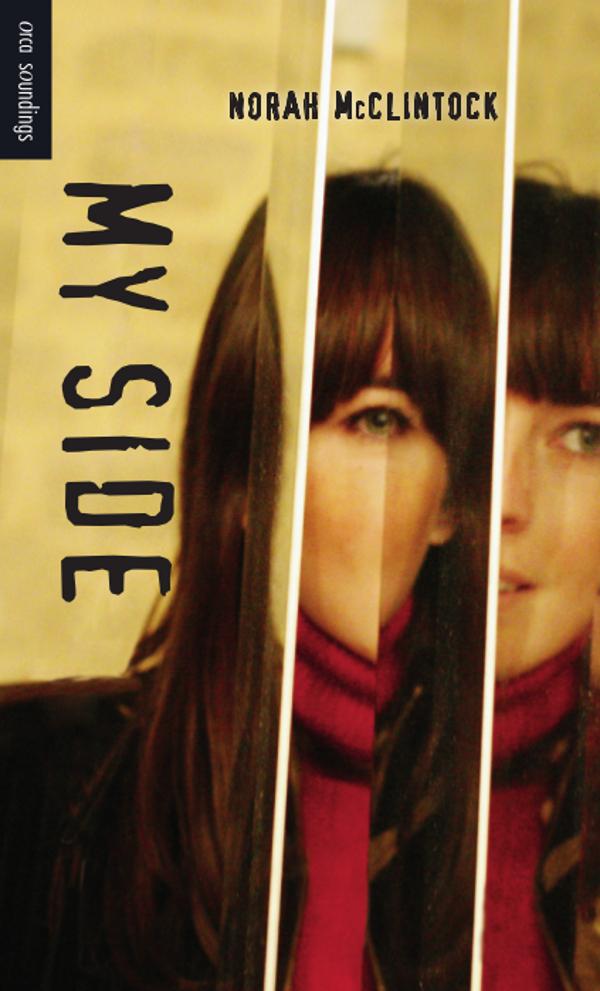 All rights reserved. No part of this publication may be reproduced
or transmitted in any form or by any means, electronic or mechanical, including
photocopying, recording or by any information storage and retrieval system now
known or to be invented, without permission in writing from the publisher.

Summary:
When Addie is publicly humiliated, it is terrible,
but when she finds out her best friend was involved, it is almost unbearable.

Orca Book Publishers gratefully acknowledges the support for its publishing
programs provided by the following agencies: the Government of Canada through
the Canada Book Fund and the Canada Council for the Arts,
and the Province of British Columbia through the BC Arts Council
and the Book Publishing Tax Credit.

I stand at the curb and stare straight ahead. I am trembling all over. This is no exaggeration. My knees are shaking. My hands are shaking. My fingers are dancing, and there is nothing I can do to calm them. I am like a little kid shivering after being in the water too long, except that my lips aren't blue and my skin isn't wrinkled like a prune. Also, I'm nowhere near the water, even though I feel as if I am drowning. I can barely breathe.

“Maybe this isn't a good idea,” my dad says. He's been saying it for days.

“I'm not.” I snap the words at him like rocks launched from a slingshot. And there it isâa combination of anger, tension and terror. If I close my eyes, I am sure I will see a question flashing at me in neon lettersâ“Why are you doing this?”

Everyone has been saying the same thing to meâmy mom, my dad, my brother by email from university, my grandma down in Phoenix, my doctor. “Addie, don't.” They're like a chorus.

But if I
don't
do this, where does that leave me?

Who will I be then?

I'm late, but not
really
. It was planned this wayânot by me, but by my dadâso I would get there without everyone staring at me. I went along with it, relieved.

“Maybe we should go in together,” my dad says.

“We talked about this.” Mostly I had done the talking. “I'm going alone.”

Before my dad can say another word, I walk away from the curb, across the wide interlocking-brick patio, past the row of garbage bins and toward the entrance. My hand is still trembling when I reach out to push open the center door. My stomach heaves when I step into the empty foyer lined with glassfronted displays of athletic trophies and team photographs. I hold my breath when I get close to the school office.

The entire outer wall of the office is glass. I could look in if I wanted to, but I tell myself I don't want to. Still, my head turns automatically, and I spot Ms. LaPointe, one of the viceprincipals, standing behind the counter. She sees me and nods. Then she turns to look at Mr. Michaud, the principal, who has just come out of his office. He follows her gaze to me. He seems surprised, even though he was told I would be here today. Maybe he thought I wouldn't show. Maybe he thought I wouldn't have the nerve. Who can blame him? I wasn't sure myself until a couple of minutes ago.

I walk up the stairs to the second floor, trying to ignore the shakiness in my knees and the churning in my stomach. The hall is deserted. Classroom doors on both sides are shut. Everyone is already inside.

I don't go to my locker. I have everything I need in my backpack. The classroom I'm headed for is at the end of the hall. As I walk toward it, the hall seems to get longer and longer, as if I'm in a nightmare and no matter how far I walk, I'll never get where I'm going.

I
am
in a nightmare. I've been dreading this for months. I've been praying this day would never come. But that's not the way it works. It's the day you wish for that never comes, not the one that terrifies you.
That
day rushes at you like a runaway locomotive.

Mr. Grayson's head swivels around when I open the door to his classroom. My mother calls Mr. Grayson a fussy man. Mostly, the male teachers at this school dress in chinos or jeans. Mr. Grayson doesn't. He always wears a suit and tie, and nine times out of ten he has a vest on under his suit jacket. He carries his lesson plans and test papers in a leather briefcase. No backpacks for him. He is a real stickler for propriety. And for the rules, most of which he made up and apply only to his classroom.

Rule number one is always be on time. Be in your seat on time. Hand in your assignments on time. Get your permission slips and your report cards signed on time.

I don't knock, which is why his eyes are squinty behind the windows of his glasses. At first I'm sure he's going to say something sarcastic, the way he always does when someone is late or misbehaving. He does this because he knows that if there's one thing every teenager on the planet is afraid of, it's being made fun of. Being made to look and feel ridiculous. Having people laugh at himâor her.

But today he doesn't whip off a sarcastic remark. Instead, his eyes register the same surprise as Mr. Michaud's.

I take a seatâmy seat, which is empty, as if it has been waiting for me all this time. The rasping sound as I pull out the chair fills the deep silence of the classroom.

Mr. Grayson clears his throat and points to the board, where he has written some notes. I stare at them, but I don't copy them down. I don't volunteer any answers either. I don't even pretend to listen. It doesn't matter. Mr. Grayson goes on as if I'm not there.

I know without looking that kids are stealing glances at me. I know that one of those people is Neely. She's sitting where she has been since the beginning of the school year, over by the window. I turn and catch her sneaking a look at me. Her pale face turns crimson, and she ducks her head.

I glance at the person beside her. It's Kayla. She looks me in the eye, as if daring me to do anything to her. I meet her gaze and hold it, unblinking, until she finally looks away. When she does, I feel myself expand, as if I've devoured her. This is why I'm here. This is exactly the feeling I have been imagining.

Emboldened, I turn my attention to my next victim. John. His head is down, but I see him trying to peek at me out of the corner of his eye. It turns out he's a bigger coward than either of the girls. He doesn't look up, even though I can tell by the redness of his ears that he knows I'm watching him. He can'tâor won'tâacknowledge me.

Finally the bell rings. My heart begins to race. My neck tenses, then my shoulders, in what Dr. Zorbas calls preparation for fight or flight. My breath quickens. I try to slow it down by counting as I breatheâin, two, three, out, two, three. Meanwhile, all around me, kids are flooding out of the classroom. Neely almost knocks some of them over in her dash for the door. John isn't far behind her.

I take my time.

I walk slowly out of the classroom and down the hall. I know exactly where I am going to find her.

I don't want to talk to her, but I have to. At least, I think I do, right up until I catch sight of her at her locker. Her locker door is open, and she is half-hidden by it. I see flashes of her hair, not as blond now as it was two months ago. I see some girls looking at herâShayna and Kayla and Jen. They're the girls Neely ogled all last year. They're the ones she was determined to get to know. The ones she was so desperate to hang out with. They're looking at her now, but they're not standing with her or clustered around her for support. Jen spots me and says something, her mouth half-hidden behind her hand. The other two nod. But they don't say anything to Neely. I wonder why.

I wait. Neely scurried out of class like a mouse desperate to get to its hole before the cat could trap her. She's doing her best to make herself invisible. Does she know I'm standing here? Are the hairs on the back of her neck standing up? Does she have that prickly feeling you get when you think someone is staring at you? Will she close her locker door and meet my eyes?

If she does, then what?

I wait. I ask myself, What did you expect?

This is what I remember.

I am holding the note in my hand and thinking, No way, this can't be true. Then I think, But it has to be. I know that handwriting. I know that signature. It
is
true. Now all I have to do is forget how nervous I am and follow what it says. I tell myself that Cinderella was probably nervous about going to that ball. But she went anyway. Her heart probably fluttered when the prince saw her and made his way over to her to ask her to dance. But she danced anyway.