Mystery of the Empty Safe 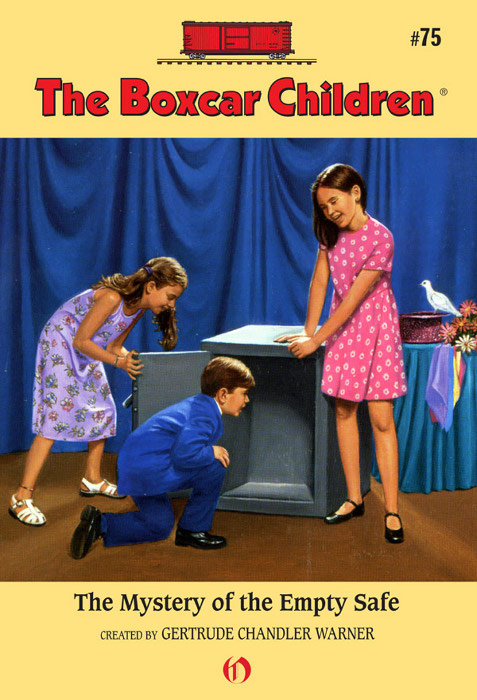 Chapter 1. A Party—With a Surprise

Chapter 3. The Man with the Limp

Chapter 8. The Watcher in the Woods

Chapter 10. The Trap Is Sprung!

CHAPTER 1
A Party—With a Surprise

“How about vanilla with purple filling,” his ten-year-old sister, Violet, suggested. Purple was her favorite color.

“Alex wanted a strawberry cake, so that’s what it’s going to be,” said their twelve-year-old sister, Jessie.

“Remember, this party is for Alex, so we have to do it the way he wants it,” fourteen-year-old Henry reminded his brother and sisters.

The Alden children had just started their own birthday party company. Their friend Alex Pierce was turning eight, and his parents had hired the Aldens to run his party. They knew Alex liked dinosaurs, so the whole party was going to be about dinosaurs. The Aldens were on their way to the store to buy all the supplies they’d need.

Jessie, who was very organized, had written everything down. “The party is going to be this Saturday at three o’clock,” she said, reading from a piece of paper. “We’ll make dinosaur decorations to put on the walls. We’ll play a bunch of games about dinosaurs. At the end we’ll have the cake, which we’ll make in the shape of a
Tyrannosaurus rex,”
Jessie said. “And it will be a
strawberry
cake,” she added, looking at Benny and Violet.

“I’ve got the money Mrs. Pierce gave us for supplies,” Henry said, patting his pocket.

“Here’s a good place to put up one of our posters,” Violet said as they passed a bulletin board that said GREENFIELD NEWS at the top. She held up a sign that read:

HIRE US FOR A GREAT TIME!

WE’LL DO ALL THE PLANNING AND THE CLEANUP.

The Aldens had made little tags at the bottom with their phone number. That way people could tear off a tag and take the Aldens’ number with them if they were interested.

The children lived with their grandfather, James Alden, because their parents had died. At first they had been afraid Mr. Alden would be mean, so they’d run away from him. They’d found an old boxcar in the woods and had gone to live there. But when at last they’d met their grandfather, they found he was a good, kind man. They came to live with him in his big house. And he brought their boxcar to the backyard so they could still play in it when they wanted to.

As they walked through the streets of Greenfield, the children put up their posters on telephone poles and bulletin boards, and in store windows when the store owners said it was okay. Most store owners were happy to help the hardworking kids.

A few minutes later the Aldens were entering Party Time, a new store in Greenfield. Party Time was filled with everything you could possibly need for a party: all different kinds of decorations, party hats and blowers, paper plates and tablecloths, and small toys that could be given away as party favors. There were also paper, paints, and markers, so that people could make their own decorations. The Aldens picked out streamers and balloons, and large sheets of paper and paints to paint pictures of dinosaurs.

“Hey, look at these!” Benny cried when he saw a bin filled with tiny plastic dinosaurs. “They will make great party favors.”

When they were done, the children took their purchases to the front counter. A pretty young woman greeted them. “Are you kids planning a party?” she asked, taking their items out of the basket one by one.

“Cool,” the woman said with a smile.

“We have our own party company!” Benny told her.

“You know, we should put up one of our posters here,” Jessie pointed out, pulling a poster from her backpack and handing it to the woman. “Do you have a place we could put this?”

The woman took the poster and read it. “Are you the Aldens?” she asked.

“Yes, I’m Henry, and these are my sisters and brother, Jessie, Violet, and Benny,” Henry said.

“I’m Patti Fox. Pleased to meet you!” She stuck out her hand and shook the children’s hands. “I’d be happy to put up your sign right here next to the register, where everyone will see it as they come in.” She tacked the poster up next to one advertising a magician named Cassandra the Great. “How did you get the idea to start a party service?” Ms. Fox asked. 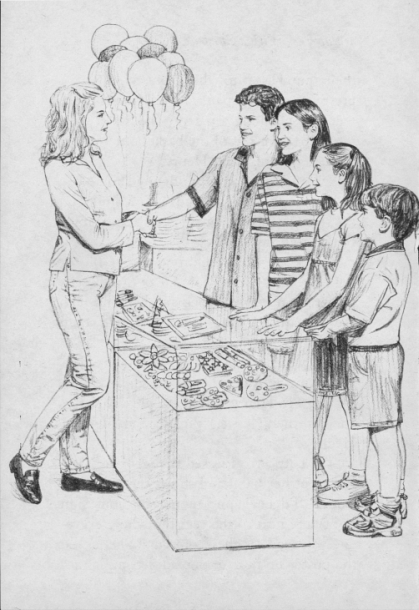 “We like to plan parties and bake cakes and make things, so we figured it would be fun,” Jessie said.

Violet was studying the pile of party items covering the counter. “We forgot to buy candles,” she said. “You can’t have a birthday party without candles for the cake!”

“I’ll run back and get some,” said Henry, turning away from the counter. As he headed down the paper goods aisle, he noticed a man and woman standing off to one side, whispering to each other. The woman was wearing a long fur coat and lots of fancy jewelry. Henry saw the man shake his head angrily at the woman. They were looking toward the checkout counter at Violet, Benny, and Jessie. Henry wondered what they were talking about, and if it had anything to do with his family. He quickly found the birthday candles and brought them up to the counter.

The man and woman walked to the checkout counter, holding a package of paper plates. The woman was looking at the children as if she wanted to say something.

“Why don’t you go ahead of us,” Violet suggested. “You’ve just got one thing and we’ve got this whole basket of stuff.”

“Thank you, that’s very nice,” the woman said. “Did I overhear you talking about a birthday party service?”

“I’m Janet Woodruff, and this is my husband, Bob.” She motioned to the man next to her, who barely glanced at the children. He looked tired and unhappy. “My daughter, Sara, is having a party. What kinds of things do you do?” she asked.

“Whatever you and Sara would like,” Jessie said. “We make decorations, bake the cake, and plan games for the kids.”

“I was going to have that magician, Cassandra the Great,” Mrs. Woodruff said, adjusting her heavy gold watch as she spoke. “But I think you kids would be better. And then I wouldn’t have to deal with her manager, who seems to be an unpleasant character.”

Bob Woodruff scowled. “At least the magician wouldn’t make a big mess in our new house.”

“We won’t make a mess,” said Benny. “We’ll clean everything up.”

Janet Woodruff gave her husband a quick glance, then turned to the children and said, “Why don’t you give me your number and we can talk more about the party.”

“Great,” said Henry, jotting down their number on a scrap of paper and handing it to Mrs. Woodruff.

After they were gone, Henry said, “I saw them talking and looking at us, and I was wondering what they were saying.”

“They must have been talking about hiring us,” said Jessie.

“I guess so,” said Henry. But he couldn’t help wondering if there had been something more going on. He remembered how angry Mr. Woodruff had looked.

“Anyway, we’d better get going.” Jessie turned to Ms. Fox, who was ringing up their items on the cash register. “We’ve got the party this Saturday afternoon for Alex Pierce and we need to go home and get ready for it.”

“Is that the Pierces on Fieldstone Drive?” Ms. Fox asked. “The ones who live in that big mansion?”

“Yes, they do live on Fieldstone,” Henry said.

The children noticed that Ms. Fox had stopped ringing up the items and was looking off into the distance as if thinking about something.

“Is something wrong?” Henry asked. “Are the Pierces friends of yours?”

Ms. Fox seemed startled. “No, oh, no … I don’t know them.” She finished adding up their purchases and put them into two large bags. When Jessie had paid, Ms. Fox handed the bags to Jessie and Henry.

“Have fun on Saturday,” she called after them with a big smile.

“We will!” Benny called.

The Aldens walked a few stores down from Party Time to the grocery store. There they bought all the things they’d need to make the cake. Before they left, they stopped next to the store exit and put one of their posters up on the bulletin board.

“Now let’s go home and get to work!” said Violet. She couldn’t wait to begin making the decorations. She loved to paint and do all kinds of artwork.

“Hey, look who’s over there!” said Benny. The Aldens turned to see the Woodruffs, pushing a cart through the produce section. Mrs. Woodruff was selecting oranges from a pile and putting them into their cart, but Mr. Woodruff was just standing idly beside her, his hands pushed into his pockets. When the Aldens waved, Mrs. Woodruff waved back. But Mr. Woodruff acted as if he didn’t even see them.

The Aldens turned to go.

“Maybe something is bothering him,” said Violet.

“I wonder what,” Benny said.

“Probably something that’s none of our business,” said Jessie. “Come on, let’s go home.”

As they left the store, Henry turned around and saw Mr. Woodruff following his wife down an aisle, an unhappy look on his face.

The following Saturday, the Aldens arrived at the Pierces’ house just after lunch-time, loaded down with supplies for the party. They brought the cake, which they’d baked the night before. They had cut and iced it to look just like a
Tyrannosaurus rex,
its eyes made of chocolate chips and its sharp, pointy claws and teeth made of candy corn.

“That’s amazing,” Mr. Pierce said when he saw the cake. “Alex will love it.”

The Aldens immediately got to work in the basement, blowing up balloons, putting up streamers, and hanging up the dinosaur pictures they’d painted. In no time, the Pierces’ basement was transformed into a jungle from millions of years ago.

“This is great!” Alex said when he came downstairs.

“You’ve really done a wonderful job,” said Mrs. Pierce. “I feel like I’ve gone back in time—to the land of the dinosaurs!”

“We’re glad you like it,” said Jessie. “But now, Alex, you need to go upstairs so we can set up the dinosaur
egg
hunt.”

“It wouldn’t be fair to the other kids if you knew where all the eggs were hidden,” Henry pointed out.

“Oh, all right,” Alex said as he followed his mother upstairs.

Jessie took out the bag of chocolate eggs, and she and Violet hid them around the room. Meanwhile, Henry and Benny hung up the Pin the Tail on the Dinosaur game they’d made. Then they set the table at the far end of the room.

The children had just finished setting everything up when the doorbell rang.

They heard Alex yell, “Hooray, they’re here!” Then they heard the sound of his feet pounding above them as he ran to the front door to greet his friends.

A few minutes later, Mrs. Pierce led a band of noisy boys and girls down to the basement.

Soon all the guests had arrived. Jessie gave them each a plastic bag and told them to start searching for “dinosaur” eggs.

When the eggs had all been found—and many of them eaten—the Aldens started a relay race. Several other games followed. Mr. and Mrs. Pierce stayed downstairs to watch, taking lots of pictures with their camera.

At last it was time for the cake. Jessie carried it over to Alex as everyone sang “Happy Birthday.”

“Wow!” Alex said when he saw the
T rex
growling up at him from the cake platter.