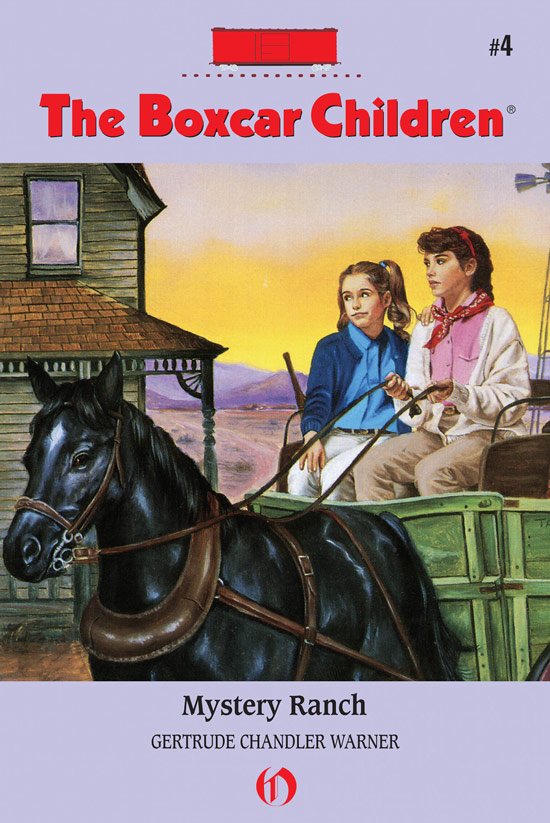 A
n exciting summer began for the four Alden children with the bang of a door.

The big house where they lived with their grandfather had been as quiet as a house can be with four children in it. Their cousin, Joe, had gone to Europe with his new wife, Alice. Everything seemed peaceful, until the afternoon when the door banged.

It was Mr. Alden.

That was all. He went straight to the front room and shut that door loudly too.

“Well!” thought Benny. “What in the world is the matter with Grandfather?”

He ran upstairs to the room where Jessie and Violet were reading.

“Listen!” Benny cried. “Something terrible must have happened to Grandfather. He banged the door, and all he said was ‘Hello.’ He always says, ‘Well, hello, Benny, and how are you today?’”

Jessie shut her book quickly and sat up straight.

“Did you tell Henry?” she asked.

“What’s the matter?” asked Henry, coming down the hall. He knew by Jessie’s voice that something had happened.

“Benny says that Grandfather came in and banged the door, and hardly spoke to him.”

Henry stood still in the door. “Where is our grandfather now, old fellow?” he asked his little brother. 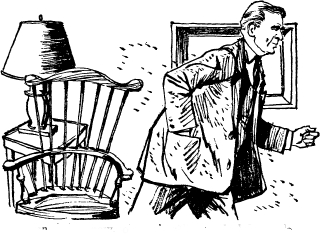 “In the front room with the door shut,” Benny answered. “And a bang on that door, too.”

“What can be the matter?” asked Violet. Her pretty little face was white.

“We should go talk to him,” said Henry quietly.

The children looked at each other and started slowly down the stairs together. Henry took a deep breath and rapped on the door.

“Come in,” Mr. Alden called. He sounded very tired. He was sitting with his head in his hands.

“Don’t be afraid to talk to us, Grandfather!” cried Benny.

“That’s right,” said Henry. “We always tell you our troubles. Now you have a trouble, and we’ll help you.”

The children sat down on the floor and waited quietly for him to go on.

“I got a letter about my sister. You didn’t know I had a sister, did you?”

“Where does she live?” Benny asked.

“Out west on a ranch. The nearest town is Centerville,” Mr. Alden said. He looked very sad. “Jane is old, and she is a very cross woman. The neighbor who stays with her is going to leave. Nobody will stay with Jane because she is so hard to get along with. She won’t leave the ranch, and yet I can’t let her stay there all alone.”

“Why don’t you go to see her, Grandfather?” Benny asked.

“Jane wouldn’t let me in,” he said. “She doesn’t like me. I have not been very nice to her, either.”

“Tell us about the ranch,” said Jessie.

“Well, it’s the old family ranch,” said Grandfather. “I lived there when I was a little boy. When my parents and I came East, Jane stayed.”

He stopped. He seemed to be thinking to himself, as if the children weren’t there.

“For a while she did very well,” he went on. “But later, she had to sell the cattle and the horses. She has only one old horse and some chickens now. She must be very poor, but she still won’t take any money from me.”

“That’s right, Benny. She’s too proud to let me help her. Let me have time to think about this. You go eat your supper, and ask Mrs. McGregor to bring me a tray. I’ll eat in here. You are kind children, but you can’t help me now.”

“No,” said Mr. Alden. “Go to supper like good children. I must think about this alone.” 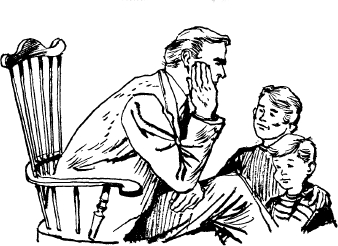 N
obody moved for a minute. At last Henry said, “Listen, Grandfather. We can’t eat a thing if you stay here all alone. Do let us help you. At least tell us who wrote the letter.”

Mr. Alden looked at each of his grandchildren. They were all watching him with loving eyes.

“Well,” he said slowly, “have it your way. Maggie wrote the letter. She is the neighbor who stays with Jane. I have sent a nurse three times, but Jane always sends her back. She doesn’t want anyone there, even to help her.”

“Isn’t it terrible to be like that?” asked Benny. “Yes, Benny. It’s a very sad thing,” said Mr. Alden. “Jane was always hard to get along with.” “But what does Maggie say?” asked Henry. Mr. Alden looked at his oldest grandson and pulled a letter out of his pocket. “Well, you may as well know the whole story,” he said. “Here is her letter.” He handed it to Henry.

Benny cried, “Read it out loud! Then we’ll all know what it says!”

“
I am writing to tell you that I cannot stay any longer with your sister. I do not get enough to eat. Jane is very cross to me, and she has many strange ideas. Now she wants to see some of your grandchildren. She is not sick, but she stays in bed all the time. I won’t leave her until you send someone else, but you must do something.”

For a minute nobody said a word. Violet was leaning on the arm of her grandfather’s chair. She looked at him and said, “I think I know a way to help, Grandfather.”

Jessie began to laugh. “Violet! Are you thinking what I’m thinking?”

“I guess so,” said Violet, smiling at her older sister.

“I guess so, too,” cried Jessie. “Grandfather, Violet and I would like to take care of Aunt Jane.”

Violet said, “We’re not worried about that. Jessie and I would be company for each other. And I like to take care of sick people.”

“I know that well, my dear,” said Mr. Alden. “Many times you have made me feel better when I was sick.”

“Telephone, Grandfather!” shouted Benny. He could never bear to wait. “Tell Maggie that the girls are coming, and everything will be all right forever and ever.”

“Jane doesn’t have a telephone,” said Mr. Alden. He smiled at Benny’s surprised face. Benny thought that everyone had a telephone.

“However, I could send a telegram,” said Mr. Alden. “They send telegrams from the train station in Centerville.”

“Let me look up trains,” said Henry, getting up from the floor. “I wish I could go, too. I have never seen a ranch.”

“I wish you could, too, Henry,” said Jessie. “But it is better for just girls, isn’t it, Grandfather? Four strange children would frighten Aunt Jane.”

Henry had found a timetable. “There is a train leaving at six o’clock tomorrow that would take you there. You’d have to sleep on the train.”

“We would love that,” said Jessie.

“Well,” said Grandfather slowly, “if you are really going, I should tell you some more. Maggie’s brother, Sam Weeks, lives next door with his wife. They are very kind people, and I am sure you can stay with them, if Jane isn’t nice to you.” 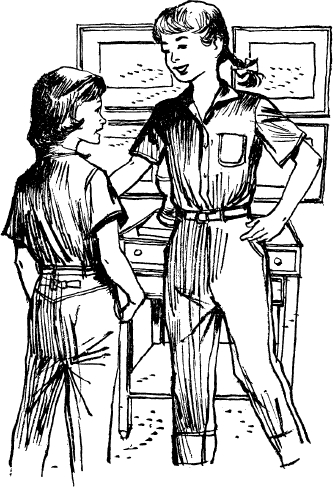 Mr. Alden already had another telegram in his mind, which he would send to Sam as soon as the children had gone to bed.

“There is just one thing you girls must promise me,” said Mr. Alden. “Every day you must send me a telegram.”

“Of course we promise,” said Jessie.

“Why, yes, I think I do,” said Mr. Alden, surprised. “I really think you two girls might do Jane more good than anyone else in the world.”

Jessie looked at Violet with a smile, which said, “Won’t we have fun?”

Violet was already thinking of her aunt as her dear Aunt Jane.

But then, Violet had never seen many cross people.

S
uch excitement! Mrs. McGregor, the housekeeper, packed a big lunch in a box. She handed it to Jessie with a motherly smile.

Benny peeked in the box and said, “If Aunt Jane doesn’t give you enough to eat, that lunch will last you two or three days.”

Mr. Alden took the girls to the train station. He watched them carefully as they took a seat together.

Jessie and Violet smiled and waved until they could not see their grandfather.

The hours passed quickly for the two girls, because everything was new and exciting. They noticed a young man who was reading a book. He was very tall. He had soft brown hair and brown eyes. Once he passed by them to get a drink of water and smiled at them.

The girls smiled back. When he took up his book again, Jessie whispered to Violet,

They thought no more about the young man until they came to Centerville early the next morning. There the young man surprised them by saying, “I’m getting off here, too. May I take your bags?”

“Why yes, thank you,” said Jessie. “That blue one and the white one up there are ours.”

Sovereign of Stars by L. M. Ironside
The Dawn of Innovation by Charles R. Morris
Reckless (Bertoli Crime Family #2) by Lauren Landish
All of Us by Raymond Carver
A Perfect Hero by Samantha James
Wicked Burn by BETH KERY
The French Executioner by C.C. Humphreys
The Dog that Dumped on my Doona by Barry Jonsberg
Snowman's Chance in Hell by Robert T. Jeschonek
Hanover Square Affair, The by Gardner, Ashley