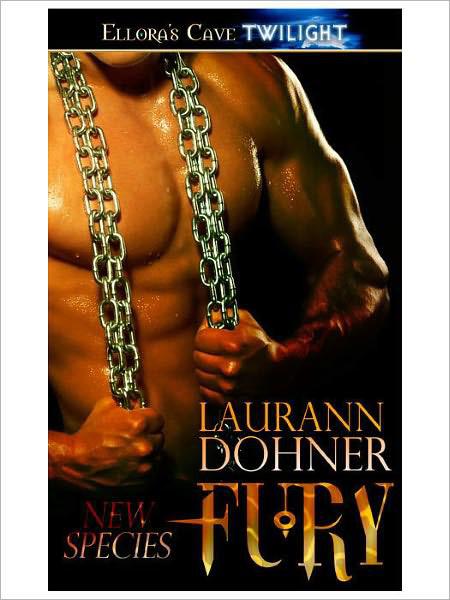 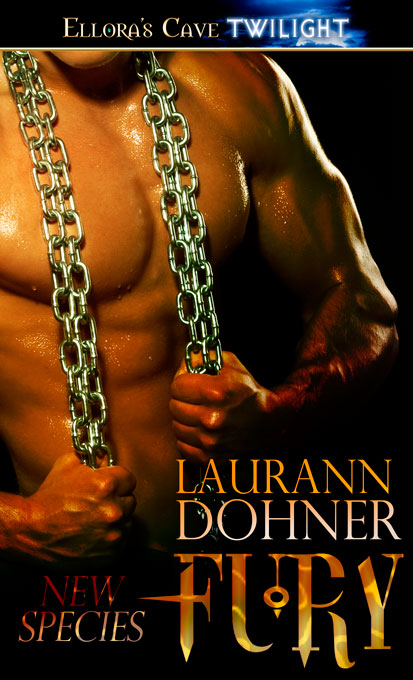 Book 1 in the New Species series.

Ellie is horrified to discover the pharmaceutical company she works for is doing illegal experiments. Company scientists have spliced human and animal DNA, creating exotic new species. One such “experiment” captures her heart and she’ll do anything to save him—even if he hates her for it.

Fury has never known compassion or love. He’s spent his life in a cell, chained and abused by humans. The one woman he allowed himself to trust betrayed him. Now he’s free and set on vengeance. He vows to end her life but when she’s finally in his grasp, harming her is the last thing he wants to do to the sexy little human.

Fury can’t resist Ellie—the touch of her hands, her mouth on his skin, her body wrapped around his. He’s obsessed with the scent of
his
woman. And Ellie wants Fury—always has. She craves his big, powerful body and wants to heal his desolate heart.

But loving Fury is one thing…taming him is another.

The publisher and author(s) acknowledge the trademark status and trademark ownership of all trademarks, service marks and word marks mentioned in this book.

The publisher does not have any control over, and does not assume any responsibility for, author or third-party Web sites or their content.

To Mr. Laurann, who always supported my writing even when I used to do it on an ancient word processor. He never complained about my late nights typing away or thought it was silly to write stories just because it made me happy. I wrote my first book in 1993, continued to write dozens more of them over the years in my free time, and this series is one that became an obsession of mine when I started it in 2001. I didn’t even consider getting published until 2009.

This is also to the readers who sent me many emails asking what I used to write, because it made me go back, re-read those books I’d written in the past and salvage this series. I’d also like to thank my wonderful editors, Pamela Campbell and Shannon Combs. They have taught me so much, continue to believe in me, and are an endless source of support. Last but not least, my thanks to everyone at Ellora’s Cave for giving an unknown author a chance. Dreams really do come true!

“Shit,” Ellie muttered under her breath, watching the man restrained against the wall inside the next room. Every time she sneaked into the viewing room it depressed her but she couldn’t stay way.

She knew he couldn’t see her through the two-way glass and yet he seemed to be looking right at her. Her gaze skimmed over his bare chest and the straining muscles of his well-defined physique. His large biceps bunched while he pulled on the chains, rage evident on his features as he fought them.

Sympathy and compassion made her ache for him. His determination showed regardless of how he’d been stripped of his freedom and dignity. He had to know the futility of his actions yet he still struggled. Her hand lifted to touch the wood frame under the glass. She wished she could soothe him by showing him that someone cared.

Most of all, she wanted to get him out of the hellish prison that contained him. He deserved to be free.

Movement in the corner of the room drew her attention away from the man who haunted her thoughts day and night. Fear made her heart race as a technician entered the room. Jacob Alter had to be one of the most callous, unfeeling monsters who worked for Mercile Industries. The asshole actually enjoyed inflicting pain on the test subjects. He especially targeted this one with his brand of cruelty. A month before, the big man chained against the wall had broken Jacob’s nose when Jacob had gotten too close to the elbow of the restrained test subject. Ellie knew it had been well deserved.

The bruising still shadowed Jacob’s face as he flashed an evil grin toward his intended victim. He planned to inflict more painful testing upon him.

“Hello, 416.” Jacob chuckled, an unpleasant sound. “I hear you pissed off Doctor Trent. You know what that means, right?” Jacob placed a tan case about the size of a bowling bag on top of the exam table in the corner. It made a loud thump. “It means I get to do something I’ve wanted for a really long time. You’re going to suffer today.” He glanced up at the security camera in the corner and waved his hand over his throat in a cutting motion.

“Shit, shit, shit,” Ellie chanted softly as panic seized her. She’d heard of inmates being tortured when they really angered one of the doctors. Jacob obviously didn’t want to record whatever horrible thing he had planned for 416. It had to be really bad.

Jacob cocked his head, continued to stare up into the corner, and then grinned before he turned to face 416.

“The camera is off now. No record is being made of this. What Doctor Trent doesn’t know is that you are going to have a horrible accident, you freak. You shouldn’t have fucked with me. I warned you that I’d take you out.” He grabbed the bag he’d carried 6

into the room. “Nobody breaks my nose and lives. I knew it would only be a matter of time before you would be punished. I just bided my time.” He pulled out a syringe.

“You’re going to die, you bastard!”

This can’t be happening
, Ellie thought. She hadn’t struggled through the daily nightmare life had become for the past two months only to lose 416 now. She’d lived in constant fear of being discovered as a spy but witnessing 416’s continual defiance had given her the strength to face each day. For him she’d taken dangerous risks to collect enough evidence to set him and the other prisoners free.

In fact, she half expected the security guards to come after her at any second. She’d become so frantic to collect real proof of what happened at the research facility that she’d committed an insane stunt half an hour before. She’d stolen one of the doctor’s badges to sneak into the woman’s office to download files off the computer. If security reviewed the surveillance tapes she’d be caught for sure. They would arrest her immediately and make her fate as grim as 416’s. They both would be dead by the end of the day.

She wavered between doing something incredibly stupid to attempt to save him and following orders from her real boss to never interfere. She’d finally obtained enough damning evidence to possibly free the forced test subjects. She had an opportunity of smuggling something out at the end of her shift if she just kept her head down, her mouth shut, and didn’t draw the attention of anyone. It would mean doing nothing while Jacob murdered the man restrained to the wall.

Her gaze locked on 416. Out of all the prisoners, she wanted to free him the most.

He had kept her up nights since she’d been transferred to the illegal drug research facility Mercile Industries ran. 416 had become the last image she saw before she drifted to sleep every night. Sometimes, she admitted, he even featured a starring role in her dreams. Her decision quickly slammed into place. It would be unacceptable to just watch this happen. It would break her heart. She couldn’t live with it if she did not even attempt to save him.

Ellie spun around, no plan in mind, but desperate now to save 416. She fled the room, forced her movements to slow when she stepped out into the hallway, more than aware of the security cameras located there, and stopped at the supply room to grab a testing kit. It would raise suspicion if she just entered the cell without a valid reason.

She yanked the tackle box-sized plastic container out of the cabinet where they were stored and tried not to appear as frantic as she felt when she entered the hallway again, but knew she needed to hurry to 416’s holding cell before Jacob had time to do something horrible.

She froze, her eyes widening, and then slowly turned. Doctor Brennor, a tall redheaded man, stepped out of one of the rooms holding a chart. “Yes?”

“I did.” She held still even though she wanted to spin and run away.

He reached up with his free hand to rub the back of his neck. “Long day, isn’t it?

Are you wishing it were the weekend already? I am.”
Shut up
, she ordered him silently,
so I can go
. She shrugged. “I like work. Speaking of, I need to take a blood sample. It’s a stat order.”

“Yeah. Sure.” His gaze drifted down her body. “Do you want to go out to dinner with me tomorrow night?”

It stunned her for a split second that he’d ask her on a date. “I have a boyfriend,” she lied easily. The idea of going out with anyone who worked for Mercile made her nauseous. “But thanks for asking.”

His mouth tensed and the friendly light cooled in his green eyes. “I see. Fine. Go. I have to update reports.” He turned to head in the opposite direction and strode away.

“I do too much damn paperwork,” he grumbled before disappearing around a corner.

Cameras are watching me
, Ellie remembered, resisting the urge to sprint down the hallway. She strolled casually to 416’s cell as if she didn’t have a care in the world. At least she hoped that was the appearance she gave.

Dear God
, she prayed silently,
let me reach him in time!
Her fingers trembled as she punched in the code on the digital lock. The door beeped when it accepted her numbers and the steel bars made a distinctive sound as they slid away, allowing her to open the door. She entered the room quickly.