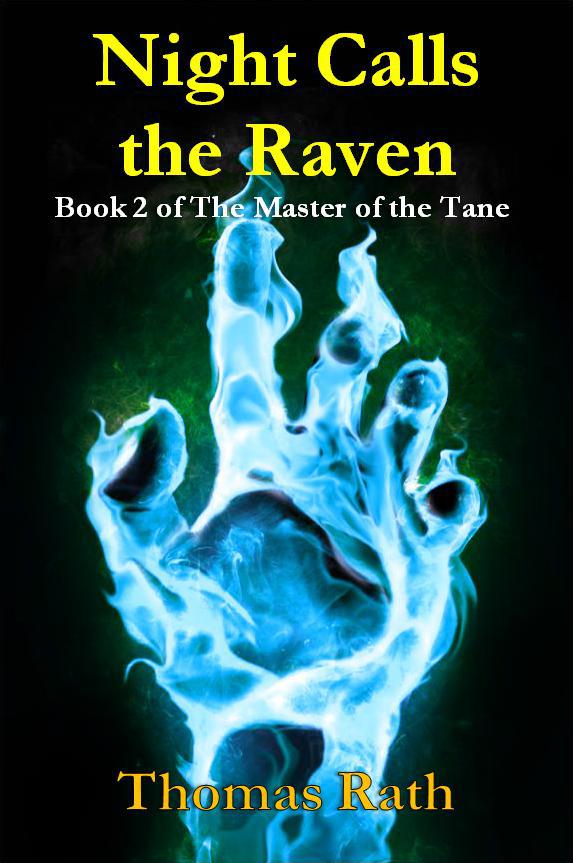 Book 2 of The Master of the Tane 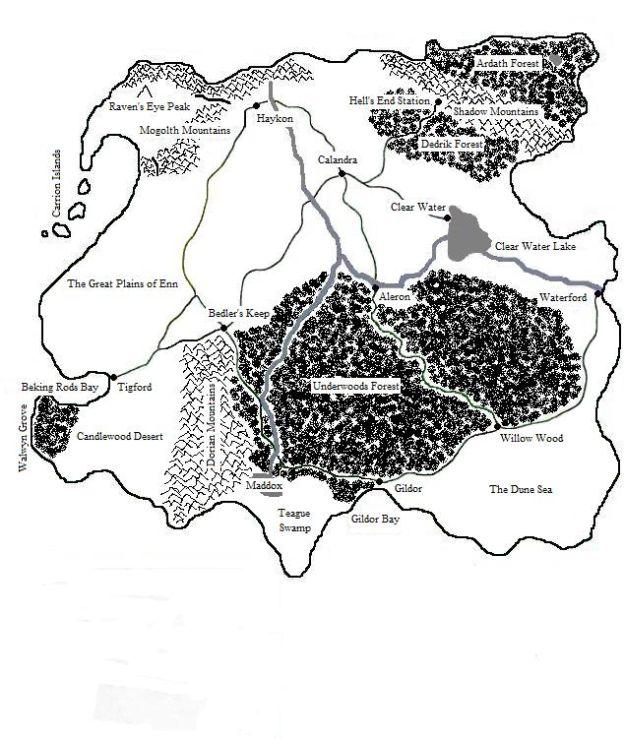 Teek stared in wonder. It was so magnificent that he felt himself struggling for breath. His eyes darted about trying desperately to absorb it all so as not to miss the tiniest detail. Never in his life would he have ever imagined anything as glorious as the snow covered mountains that drifted along below. To his right he could make out the enormous form of what could only be the Underwoods forest. It was a kaleidoscope of green hues alternating between dark and light giving the effect of ocean waves rippling gently against a southerly breeze. Though magnificent and serene from above, he knew that dark and evil things lurked about under its canopy. He could hardly believe something so beautiful could be so dangerous. Turning back to his left his vision was filled with nothing but jagged mountain cliffs peaked with the remaining snows of the past winter desperately clinging to the rock as if to an island sinking into the sea.

Looking up he became dizzy by the enormous sky that seemed so close he felt he could reach up and touch it like a still, clear lake inviting his finger to trace a rippling line across its smooth surface. The wind blew against his face slapping him with its cold fingers and bringing tears to his dark eyes. His small, tanned body shook against the frigid air sending his teeth into a chattering dance. He was not dressed for such weather or such altitude. All he wore was a small loincloth tied snuggly about his thin waist. He was a Waseeni after all. The Teague swampland, where he made his home, was a furnace of heat and humidity unlike the frigid mountain air. Luckily, Tchee had provided him some of her own feathers with which he had created a warm cloak. Pulling it tight about him, he instantly shut out the cold.

He thought back to his home wondering what his mother and little brother and sisters were doing. Were they thinking of him? Had they enough to eat? He worried about them constantly but could not be swayed from the purpose that brought him out into the strange and wonderful world. All his life he had craved adventure. His earliest memories were filled with the thrill and exhilaration he’d felt from the stories old Twee had told him. Twee was the oldest living Waseeni and Teek’s best friend. Actually, it was because of Twee that he was where he was now, sailing through the air over the breathtaking mountains.

Teek was on an appeasing journey for his old friend. Twee had died only two weeks before and now Teek was searching for a gift to present to his dead ancestors so they would accept Twee’s soul into the afterlife. It was customary that a relative participate in the journey but Twee had no family, having outlived them all. So, a lottery was had. By law, Teek was too young to participate but as if chosen by Twee himself, his name was miraculously pulled from the rest of the tiles. His mother had objected at first but the decision was made final and Teek was sent off on his own. The appeasing
journey was always done alone.

A gust of wind bit his cheeks and then swooped down his chest wrapping its icy grip around him as if trying to squeeze out his breath. He gasped and then snuggled in closer to the downy softness and warmth of the giant bird beneath him. Tchee, as Teek called her, had befriended him after he’d saved her life just days before.
That small adventure had almost cost him his. He freed Tchee from a partially sprung trap but was, himself, caught by the men that set it. She had saved him from those men just the day before.

He pressed his cheek hard against her neck. She smelled clean, like the Teague trees of his homeland after a refreshing summer rain. Tchee
was enormous, standing at least three times his own height. Her beak was curved down like that of an eagle, as were the razor sharp talons now tucked in against her underbelly. Her feathers were pure white excepting for those on the neck and head which had streaks of dark red and brown that flared over the top of her skull and came to a point between her enchanting eyes. Her eyes were a crystal blue of amazing clarity that reflected an eerie light of extreme intelligence.

Tchee suddenly swooped low brushing the tip of a peak that seemed to jealously reach for them in an effort to pull them back to the ground. Teek couldn’t hold back the thrilled scream that escaped his lips but was quickly swallowed in the frigid wind. Tchee dropped lower, skirting the side of a rugged cliff, and then shot like an arrow towards the ground below. What looked to be a tiny creek quickly grew into a large, rushing river that raced up at them with frightening speed. Teek felt his shivers change from cold to terror as they shot down in a dive towards the water. He braced himself for the icy chill that would surely squeeze the life from his thin frame upon impact. The roar of the rushing wind and crashing river joined in a shout of dark c
hallenge beckoning them closer.

Just before impact Tchee’s body shifted slightly pulling them up and leveling them off inches above the rolling spring runoff. Teek looked over Tchee’s shoulder at the water whipping past just as she extended her terrible talons and dipped them into the freezing river. He felt the slightest drag and then suddenly they were climbing again as Tchee’s voice rang out in a triumphant scream that reverberated off the canyon walls in a deafening clash. EEEEERRRRRRROOOOOOCCCCCCCC!

Teek’s heart raced in his chest pounding against his ribs as if trying to force its way out. Suddenly, a warning taste of acid shot into his mouth as his stomach finally caught up with the rest of his body and started to protest. No longer was there the thrill of flight and the beauty of the rugged, snowcapped mountains but instead a dizzying nausea that was making strong threats of ridding him of last night’s meal. He gripped Tchee’s feathers and pressed a sweating face hard against her neck in an effort to calm his innards. As if sensing his discomfort, Tchee suddenly dropped towards the ground soliciting another shot of acid into Teek’s mouth. He felt Tchee hover for the slightest moment before coming to a solid landing though onto what he couldn’t say because his eyes were pressed tightly shut.

The cacophonous blare of the shooting river was all he could hear giving him the sense that his bird friend had unceremoniously landed them smack in the middle of its rolling mass. He chanced a slit in his left eye knowing that if it caught the motion of the gushing water it would send his stomach’s contents over the edge and through his teeth. But he also knew that to not embrace the ground soon would have the same effect. Thankfully, what he saw was not water but the inviting color of spring grass dotted with wild flowers.

He didn’t wait to see more but just slid his trembling body off his giant friend and hastily plopped onto the damp ground. Rolling to his side he curled up and let out a few week coughs. Tchee chortled above him with a noise that sounded very much like laughter. Teek moaned and then rolled onto his back throwing one arm onto his forehead while digging his other hand into the sod.

“What was that all about?” he moaned and then coughed again. “I almost lost everything in my stomach, thanks to you.”

Tchee just chortled in a symphony of cackles and whistles.

Teek opened an eye and stared at the beautiful bird standing quite content over him, her head cocked to one side staring back at him as if inspecting a rare species of bug. Suddenly, she twisted to the side, her head darting to the ground behind her before shooting back. Teek shielded his head with both hands as something large and dark suddenly dropped from Tchee’s beak and landed with a dull thud next to him. The distinct smell of fresh fish filled his nostrils
not helping his stomach in the least. He quickly rolled away from Tchee’s catch and coughed again, a small spasm gripping his innards.

Teek jolted with a start as the fish suddenly dropped in front him again. “All right, all right,” he croaked rolling away and then forcing himself to his knees. “Just give me a second to get used to the ground again!”

Tchee bobbed her head playfully and then chortled in reply. She seemed to be enjoying this.

Teek groaned slightly taking in deep breaths of moist, cool air. The grass was cold and damp beneath his bare legs soliciting a slight shiver that tried to warm his thin frame. He chanced a quick look around taking in his surroundings as calmly as he could so as not to disturb his irritated belly. They were in a fair sized meadow split almost through the middle by the angry river that carried its frigid water at a quick pace towards an opening in the solid rock ahead. Compared to the rapids, just visible upstream and behind him, and the loud noises of what could only be a falls downstream, the water running through the meadow was relatively calm but still forceful enough to sweep away the unwary.

To his left, a clump of trees bordered the swollen waterway in a tight formation as if greedily trying to push each other out of the way. They swayed slightly moving at a hypnotic pace against the gentle wind that brushed against their very tips. The grass spread out like a carpet covering everything from the river’s edge right up to the sheer expanses of the mountainsides that rose up and formed a rugged U shape in front of him and to either side. Behind, the terrain was rough and jagged rising quickly and creating the abrasive face from which sprang the terrible rapids that fed the valley.

Teek shivered. It was beautiful but forbidding at the same time. He didn’t know why but had he been there alone he would have been afraid. His shivering became more intense. The sun had
not yet broken over the mountaintops to fill the area with its warming rays and Teek was quickly becoming chilled. As if sensing his discomfort, Tchee hopped closer to him so he could press against her warm, downy feathers. He could feel a low rumbling coo in her chest that made him suddenly think of his mother. Taking another cleansing breath of the moist air, he finally felt his stomach begin to settle.

Tchee’s beak shot down and ripped into the fish tearing a large piece of flesh from its side. She gulped it down quickly and then turned her head and stared at Teek with her crystal eyes. She cooed softly and then jerked her head up and down. Teek laughed. He knew exactly what she wanted but wasn’t sure his stomach could handle anything just yet.

Brass and Bone by Cynthia Gael
Sealed with a Diss by Lisi Harrison
A Slice of Murder by Chris Cavender
What Happens Next by Colleen Clayton
Telepathy by Amir Tag Elsir
[email protected] by Andrei Codrescu
Conquering the Chaos: Win in India, Win Everywhere by Ravi Venkatesan
Lone Wolf by Tessa Clarke
Castle of the Wolf by Margaret Moore - Castle of the Wolf
Runaway: The Sequel to Secrets, a sexy and dramatic western romance (Finding Love ~ THE OUTSIDER SERIES) by Eckhart, Lorhainne