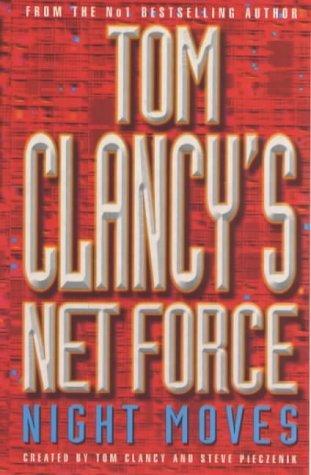 Tags:
Fiction, General, Thriller, Action & Adventure, Modern fiction, Adventure, Terrorists, Internet
Onbekend
SUMMARY:
In the year 2010, computers are the new superpowers. Those who control them control the world. To enforce the Net Laws, Congress creates the ultimate computer security agency within the FBI: the Net Force. A Union Jack appearing on computer screens all over the world is just a harbinger of the danger to come. As cyberspace is thrown into chaos, several computer experts suffer strokes while hunting the deadly hacker in virtual reality. One of them is the Net Force's own Jay Gridley. And now the Net Force operatives must track down a man capable of cracking every computer code in the world -- and pitting nation against nation. Read by Edward Herrmann
Net Force 03: Night Moves
By: Tom Clancy

Synopsis:
Here's another installment in the netforce series as an "old friend", a deadly assassin, stalks netforce. Tom Clancy's
NET
FORCE
NIGHT MOVES
Created by Tom Clancy and Steve Piecxenik BERKLEYBOOKS.NEW YORK
"The history of the sword is the history of humanity." Richard Burton

"Putting on the spectacles of science in expectation of finding the answer to everything looked at signifies inner blindness."
J. Frank Dobie

Chain of Command by CG Cooper
Bellringer by J. Robert Janes
Only Son by Kevin O'Brien
My Lady Scandal by Kate Harper
Sugar in the Blood by Andrea Stuart
Sing Me Home by Lisa Ann Verge
The Isadora Interviews by Katie Cross
Besieged by L.P. Lovell
Chasing Shadows (A Shadow Chronicles Novel) by Moore, Christina
Nan Ryan by Silken Bondage