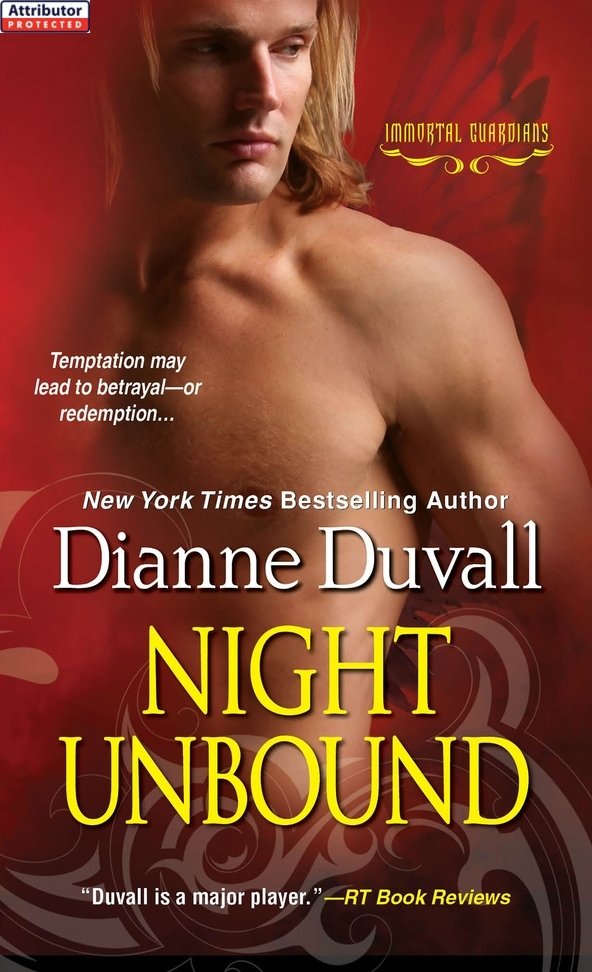 A RUSH OF WINGS

Lisette lowered her arms and slid them around his waist, intending to explore his broad, muscled back, and encountered satiny feathers.

She broke the kiss, surprised, and lowered her heels to the ground. She had forgotten for a moment. . . .

The need in his golden eyes turned her insides to liquid fire.

And any barrier that struggled to hold her back crumbled. Giving him a small smile, she nodded. Touch him? She could do that.

Lisette slid her arms around his waist and flattened her palms on his back.

She had been so distracted by his wings in the past that she hadn't noticed how ripped he was. Rising onto her toes, she brushed her lips against his. He responded hungrily as she explored his warm flesh with her fingers.

She had always appreciated strength. And Zach had it in spades. All muscle and sinew.

“You taste even better than I imagined,” he murmured, sending a warm spiral of pleasure darting through her.

“So do you.” And felt magnificent, too. Unable to resist, she drew her hands down and cupped his tight, leather-clad ass.

Bathed in the light of a full moon, Zach listened to the activity in the two-story house below him.

Gargoyle duty. Wasn't that what Seth had called Zach's propensity to perch upon rooftops and eavesdrop on or observe whatever happened beneath him?

He glanced around. Aside from the trees that towered over him and surrounded the house, his only companions were the shingles beneath his feet, the solar panels that reflected the moon like a tranquil pond, and an opossum trudging across the back lawn.

What the hell was he doing here? He had visited this particular house so often, he thought wryly, that his ass would soon leave a permanent imprint in the roof.

What drew him here?

The answer opened the front door and, offering her Second, or human guard, a “see you later,” crossed to the motorcycle parked in the circular drive.

As silent as the faint breeze, Zach flexed his wings and took to the sky, seeking refuge behind one of the thick evergreens.

Lisette donned her helmet and lifted her chin to fasten the strap. Her gaze, as it always did, went to the roof, wandering across the peak as though she expected to find something there.

Did she hope to find
him
there?

No. Of course not. He had only spoken to her twice. And one of those times had been when she and a couple of her fellow immortals had ambushed him, chained him up, and interrogated him.

She knew Seth, the leader of the Immortal Guardians, didn't trust him.

And yet, Zach almost convinced himself that he saw disappointment in her pretty brown eyes before she climbed onto the back of her sleek black Hayabusa and took off.

He might as well be a kite connected to her with a string. That increasingly familiar compulsion to follow her sent him sailing through the night above her.

Wings spread, Zach rode the breeze, swooping and twirling as he raced the motorcycle that ate up the asphalt below.

The slender figure guiding it nearly scraped her knee on the pavement as she leaned into a curve, taking it far too fast. Her long, midnight braid flapped and danced in the wind, bouncing off the sheathed shoto swords strapped to her back. Garbed all in black, she didn't wear her long coat tonight and, no doubt, would generate a great deal of attention if any other drivers on the road could keep up with her long enough to notice the multitude of weapons she bore.

And she knew how to use those weapons. He had seen her in action. Hunting insane vampires was a violent, bloody business. One made all the more so recently when mercenaries had gained knowledge of immortals, vampires, and the virus that infected them both.

Zach shook his head. Mankind was so predictable. Getting rich always triumphed over doing good. The mercenaries had seen the virus as a means of creating an army of supersoldiers they could hire out to the highest bidder. And their determination to understand why vampires were driven insane by the virus and immortals weren't had nearly led to Lisette's capture.

Slowing, the lovely immortal in question turned onto a private drive and stopped before a tall security gate.

Zach's gaze lingered on her long legs, outlined nicely by fitted cargo pants, as she straddled the bike and typed in the code.

When the gate swung open, she shot forward once more.

Zach swept his wings down, propelling himself forward and following her progress through the breaks in the trees that formed a canopy between them. She headed for the home of David, the second oldest Immortal Guardian on the planet. Zach had first developed his fascination with Lisette by spending time perched upon the roof of
this
house, which he often thought of as the hub of the Immortal Guardians' world here in the United States. David treated immortals, their Seconds, and the other humans who assisted them as family and welcomed any and all to visit whenever they wished to.

Any and all save Zach, who wasn't part of their world.

Completely distracted, Zach nearly crashed into a large owl. Feathers flew as the owl panicked. Talons threatened. Zach banked, reversed, dodged, and lost sight of Lisette. By the time he caught up with her, she had stowed her helmet away and was striding up the walk to David's front door.

Damn, he loved to watch her walk, loved those long, confident strides.

And damned if he didn't envy those inside who were about to share her company.

He waited until she entered, then spread his wings and gently floated down to the rooftop.

A heavy weight slammed into his middle, knocking the breath from him, breaking several ribs, and lifting him from the roof.

North Carolina vanished, replaced by icy tundra being swept clean by a blizzard.

Zach grunted in pain as his back slammed down onto a glacial surface as hard as stone. Several bones in the wings he hadn't had time to retract broke, snapping like twigs. Ice pellets peppered him, stinging like needles and abrading skin left bare save for his usual leather pants.

Squinting against the white, he focused on the figure kneeling above him, face dark with fury, eyes glowing gold.

Seth had scorned the path Zach and the Others had chosen so long ago. He had chosen a far different path.

It wasn't until recently that Zach had begun to question which path was the right one.

Zach tried to teleport and couldn't. Seth must be doing something to block or hamper Zach's gifts.

“I warned you,” Seth said. “I warned you I've been exercising and growing my powers while you and the Others sat on your asses. Did you think I lied?”

When Zach opened his mouth to respond, Seth lifted him and slammed him against the ice again, breaking more bones in Zach's wings.

“Why what?” Zach growled as agony overwhelmed him.

Lightning streaked through the sky and struck the glacier a few yards away.

He had never seen Seth so enraged.

“Don't fuck with me! Why did you restore Donald's and Nelson's memories? Why did you help them prey upon my Immortal Guardians?”

Donald and Nelson. Leaders of the mercenary group that had
twice
hunted immortals and twice been defeated in epic battles.

Zach shook his head, unable to speak past the fingers clutching his throat.

Roaring, Seth rose to his feet and waved an arm in a circle.

The wind ceased blowing. The snow it had been carrying fluttered down to the ground, settling upon Zach and decorating his eyelashes as silence engulfed them.

Shit
. Seth could control the weather? None of the Others, himself included, could do that.

Zach started to rise, but found he couldn't.

Seth held Zach in place telekinetically, his power a frightening and tangible force. “Only you or an Immortal Guardian could have done it. And my immortals wouldn't betray me. Just tell me
why
you did it.”

“I deny nothing,” Zach snarled, his own fury now matching Seth's.

So quickly that he appeared to vanish for a moment, Seth drew a dagger andâkneelingâplunged the blade into Zach's chest an inch from his heart.

Pain shrieked through him.

Seth leaned in close and turned the blade, heightening Zach's suffering. “Listen closely, Cousin. This is but a tiny fraction of the power I wield. Betray me again, endanger my Immortal Guardian family again, and I
will
destroy you. If the Others don't like it and choose to confront me, I assure you they will meet the same fate.”

He rose while Zach struggled for breath.

The pressure holding Zach in place fell away.

Raising a hand that shook, Zach grasped the handle of the dagger and slowly pulled it from his chest.

It fell to the ground, staining the ice red.

He tried to teleport and found he couldn't. Seth had done something to drain his powers.

Gritting his teeth, Zach sat up with a growl of agony and dragged his wings with him.

A shiver shook him.

He glanced around at the frozen landscape.

No structure or shelter in sight.

For the next several hours, until his broken wings healed enough to carry him home, Zach's only company would be the anger festering inside him.

That and the satisfaction of knowing he
wasn't
the one who had betrayed Seth.

Apparently, somewhere out there, an Immortal Guardian was plotting to take down his or her
illustrious
leader.

And Zach would watch it all with a smile.

Through the curtain of snow whipping past him, Zach caught movement.

He rose, muscles stiff with cold and strain. Gravity pulled at his broken wings, increasing the pain.

If Seth had decided to return, Zach would meet him on his feet.

He squinted against the stinging snow and ice.

A shadowy figure separated itself from the dark backdrop of night. Tall. As tall as Zach, who was only a couple of inches short of seven feet. His body bracketed by wings.

Then a third. And a fourth.

Nearly a dozen in all.

After the first time Zach had strayed . . . to help Seth, the ungrateful bastard . . . and been punished, Zach had learned to hide his presence from the Others, to shield his movements and elude detection. The Others had had no idea how far he had deviated from their chosen path in recent months.

Until now. Until Seth had destroyed Zach's ability to evade their scrutiny and led them right to him.

The powerful men surrounded him.

“It appears you haven't learned your lesson,” one pronounced.

Oh, but I have,
Zach thought.

“We'll have to be more diligent this time in our efforts to impress upon you the importance of not deviating from the path.”

He was certain they would be very diligent indeed.

Bitterness welled within him, nearly choking him in its intensity.

Little did they know their punishment, lesson, whatever they wished to call the torture they intended for him, wasn't necessary.

Twice Zach had intervened to aid Seth and his Immortal Guardians. And all it had gotten him was a knife in the chest.

If
he survived what was in store for him.