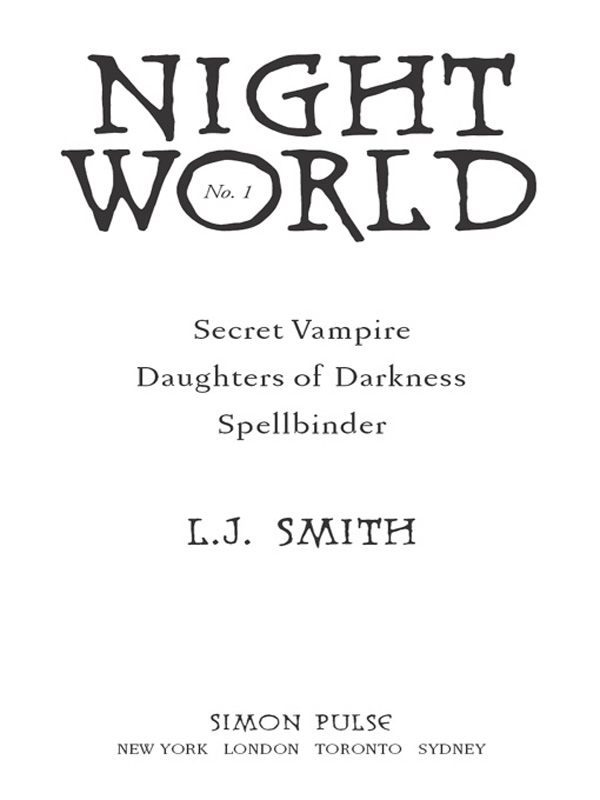 THE NIGHT WORLDâ¦LOVE HAS NEVER BEEN SO DANGEROUS.

THE NIGHT WORLD isn't a place. It's all around us. The creatures of Night World are beautiful and deadly and irresistible to humans. Your best friend could be oneâso could your crush.

These are the stories about what happens when the rules get broken. 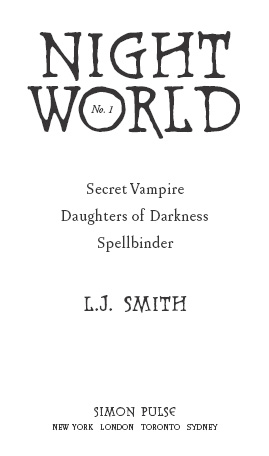 This book is a work of fiction. Any references to historical events, real people, or real locales are used fictitiously. Other names, characters, places, and incidents are the product of the author's imagination, and any resemblance to actual events or locales or persons, living or dead, is entirely coincidental.

NIGHT WORLD is a trademark of Lisa J. Smith.

These titles were previously published individually by Simon Pulse.

For Marilyn Marlow,
a marvel of an agent.

And with thanks to Jeanie Danek
and the other wonderful nurses like her.

I
t was on the first day of summer vacation that Poppy found out she was going to die.

It happened on Monday, the first
real
day of vacation (the weekend didn't count). Poppy woke up feeling gloriously weightless and thought,
No school.
Sunlight was streaming in the window, turning the sheer hangings around her bed filmy gold. Poppy pushed them aside and jumped out of bedâand winced.

Ouch. That pain in her stomach again. Sort of a gnawing, as if something were eating its way toward her back. It helped a little if she bent over.

No, Poppy thought. I refuse to be sick during summer vacation. I
refuse.
A little power of positive thinking is what's needed here.

Grimly, doubled overâthink positive, idiot!âshe made her way down the hall to the turquoise-and-gold-tiled bathroom. At first she thought she was going to throw up, but then the pain eased as suddenly as it had come. Poppy straightened and regarded her tousled reflection triumphantly.

“Stick with me, kid, and you'll be fine,” she whispered to it, and gave a conspiratorial wink. Then she leaned forward, seeing her own green eyes narrow in suspicion. There on her nose were four freckles. Four and a half, if she were completely honest, which Poppy North usually was. How childish, howâ
cute!
Poppy stuck her tongue out at herself and then turned away with great dignity, without bothering to comb the wild coppery curls that clustered over her head.

She maintained the dignity until she got to the kitchen, where Phillip, her twin brother, was eating Special K. Then she narrowed her eyes again, this time at him. It was bad enough to be small, slight, and curly-hairedâto look, in fact, as much like an elf as anything she'd ever seen sitting on a buttercup in a children's picture bookâbut to have a twin who was tall, Viking-blond, and classically handsomeâ¦well, that just showed a certain deliberate malice in the makeup of the universe, didn't it?

“Hello, Phillip,” she said in a voice heavy with menace.

Phillip, who was used to his sister's moods, was unimpressed. He lifted his gaze from the comic section of the
L.A. Times
for a moment. Poppy had to admit that he had nice eyes: questing green eyes with very dark lashes. They were the only thing the twins had in common.

“Hi,” Phillip said flatly, and went back to the comics. Not many kids Poppy knew read the newspaper, but that was Phil all over. Like Poppy, he'd been a junior at El Camino High last year, and unlike Poppy, he'd made straight
A
's while starring on the football team, the hockey team, and the baseball team. Also serving as class president. One of Poppy's greatest joys in life was teasing him. She thought he was too straitlaced.

Just now she giggled and shrugged, giving up the menacing look. “Where's Cliff and Mom?” Cliff Hilgard was their stepfather of three years and even straighter-laced than Phil.

“Cliff's at work. Mom's getting dressed. You'd better eat something or she'll get on your case.”

“Yeah, yeahâ¦” Poppy went on tiptoe to rummage through a cupboard. Finding a box of Frosted Flakes, she thrust a hand in and delicately pulled out one flake. She ate it dry.

It wasn't
all
bad being short and elfin. She did a few dance steps to the refrigerator, shaking the cereal box in rhythm.

“I'm aâ¦sex pixie!” she sang, giving it a foot-stomping rhythm.

“No, you're not,” Phillip said with devastating calm. “And why don't you put some clothes on?”

Holding the refrigerator door open, Poppy looked down at herself. She was wearing the oversize T-shirt she'd slept in. It covered her like a minidress. “This
is
clothes,” she said serenely, taking a Diet Coke from the fridge.

There was a knock at the kitchen door. Poppy saw who it was through the screen.

James Rasmussen came in, taking off his wraparound Ray-Bans. Looking at him, Poppy felt a pangâas always. It didn't matter that she had seen him every day, practically, for the past ten years. She still felt a quick sharp throb in her chest, somewhere between sweetness and pain, when first confronted with him every morning.

It wasn't just his outlaw good looks, which always reminded her vaguely of James Dean. He had silky light brown hair, a subtle, intelligent face, and gray eyes that were alternately intense and cool. He was the handsomest boy at El Camino High, but that wasn't it, that wasn't what Poppy responded to. It was something
inside
him, something mysterious and compelling and always just out of reach. It made her heart beat fast and her skin tingle.

Phillip felt differently. As soon as James came in, he stiffened and his face went cold. Electric dislike flashed between the two boys.

Then James smiled faintly, as if Phillip's reaction amused him. “Hi.”

“Hi,” Phil said, not thawing in the least. Poppy had the strong sense that he'd like to bundle her up and rush her out of the room. Phillip always overdid the protective-brother bit when James was around. “So how's Jacklyn and Michaela?” he added nastily.

“You don't
know
? Oh, yeah, you always drop your girlfriends just before summer vacation. Leaves you free to maneuver, right?”

Phillip glared at him with unabashed hatred.

Poppy, for her part, was seized by joy. Goodbye, Jacklyn; goodbye Michaela. Goodbye to Jacklyn's elegant long legs and Michaela's amazing pneumatic chest. This was going to be a wonderful summer.

Many people thought Poppy and James's relationship platonic. This wasn't true. Poppy had known for years that she was going to marry him. It was one of her two great ambitions, the other being to see the world. She just hadn't gotten around to informing James yet. Right now he still thought he liked long-legged girls with salon fingernails and Italian pumps.

“Is that a new CD?” she said, to distract him from his stare out with his future brother-in-law.

James hefted it. “It's the new Ethnotechno release.”

Poppy cheered. “More Tuva throat singersâI can't
wait.
Let's go listen to it.” But just then her mother walked in. Poppy's mother was cool, blond, and perfect, like an Alfred Hitchcock heroine. She normally wore an expression of effortless efficiency. Poppy, heading out of the kitchen, nearly ran into her.

“Hold on a minute,” Poppy's mother said, getting hold of Poppy by the back of her T-shirt. “Good morning, Phil; good morning, James,” she added. Phil said good morning and James nodded, ironically polite.

“Has everybody had breakfast?” Poppy's mother asked, and when the boys said they had, she looked at her daughter. “And what about you?” she asked, gazing into Poppy's face.

Poppy rattled the Frosted Flakes box and her mother winced. “Why don't you at least put milk on them?”

“Better this way,” Poppy said firmly, but when her mother gave her a little push toward the refrigerator, she went and got a quart carton of lowfat milk.

“What are you planning to do with your first day of freedom?” her mother said, glancing from James to Poppy.

“Oh, I don't know.” Poppy looked at James. “Listen to some music; maybe go up to the hills? Or drive to the beach?”

“Whatever you want,” James said. “We've got all summer.”

The summer stretched out in front of Poppy, hot and golden and resplendent. It smelled like pool chlorine and sea salt; it felt like warm grass under her back. Three whole months, she thought. That's forever. Three months is forever.

It was strange that she was actually thinking this when it happened.

“We could check out the new shops at the Villageâ” she was beginning, when suddenly the pain struck and her breath caught in her throat.

It was badâa deep, twisting burst of agony that made her double over. The milk carton flew from her fingers and everything went gray.