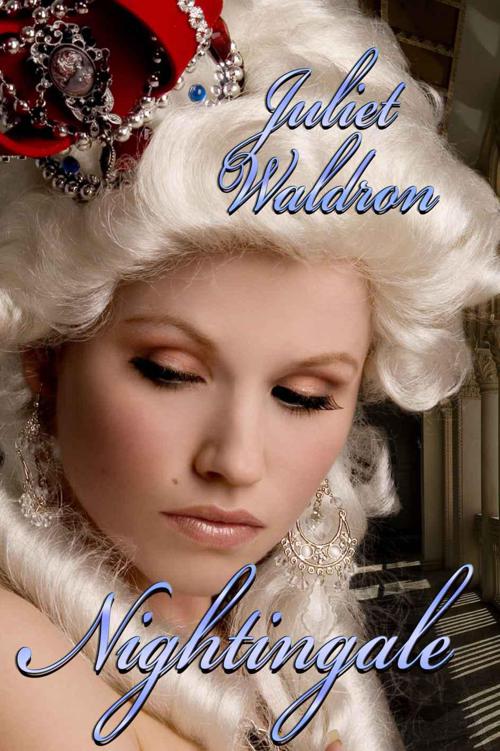 All rights reserved. Without limiting the rights under
copyright reserved above, no part of this publication may be reproduced, stored in or introduced into a retrieval system, or transmitted, in any form, or by any means (electronic, mechanical, photocopying, recording, or otherwise) without the prior written permission of both the copyright owner and the above publisher of this book

All characters in this book have no existence outside the imagination of the author, and have no relation whatever to anyone bearing the same name or names. These characters are not even distantly inspired by any individual known or unknown to the author, and all incidents are pure invention.

Klara ached all over, but perhaps the bitter draught of willow bark and hot water which she had just swallowed would subdue it. The aristocratic audience, which contained two princes of the Blood Royal
, was one she did not dare refuse.

In the winter twilight, servants had been lighting ranks of candles set upon the chandeliers. The task completed, those tinkling balls of crystal and light were hoisted towards the ceiling. A glow fell over the white wigs and court clothes of the guests, who were seated in a half-circle around four string players and a gilded harpsichord.

The January afternoon was cold, and her maid, Liese had scolded. In the end, Klara resigned herself to wear a silver wig. Very often, in Max’s absence, she did not. This, of course, quickly set her apart from the other ladies, but Klara Silber's hair was her glory. Thick, lively, and the color of polished mahogany, it made a spectacular crown about her heart-shaped face. To atone for the absence of the required wig, her hairdresser would create a frenzy of curls. One auburn lock was often left loose to trail with lazy abandon over one shoulder. Today, however, she was simply too cold. Today she would gratefully accept the warmth that came with the wig.

The host of this “English Tea
”, an elderly Baron, took Klara's hand in his white kid glove, ready to lead her to the harpsichord.

"You appear a little fatigued, Fraulein Silber. Please don't feel you must tax yourself too much on my account, especially when there is so much sickness about this winter. Perhaps just the poignant little piece of Kapellmeister Handel, the song of Queen Sheba, which the ladies love so much.” The Baron, unlike so many others of high rank, was always considerate of his performers.

"I do feel somewhat tired, sir." Meeting his faded, benevolent gaze, Klara glossed her discomfort. "However, I would never wish to disappoint you, or your distinguished guests."

"I think there is little danger of that, Fraulein." He regarded her with a fatherly smile. "We wouldn't want you to be ill when your patron returns from his labors in Silesia. I'm sure that after the fighting and the long labors of his absence, Count Oettingen will often require the healing solace of your voice."

The Baron was making conversation, but Klara shivered.

Just the mention of Max!

Snow and continuing turmoil on the Prussian border had detained her patron, the Most Noble Maximilian von Oettingen. Klara had been gratefully thanking every saint in the calendar that he had not yet returned.

As she approached the fortepiano on the Baron's arm, a tall, muscular young man in the black and scarlet livery of the Hungarian Prince Vehnsky stood and made a graceful bow. If Klara had only seen him and had not listened to his skillful harpsichord work for the last half hour, she would have believed him to be a member of the Prince's guard.

"You have given in to convention today, but it seems there is another musician present who doesn’t care much for fashion." The Baron alluded to the fact that the accompanist’s shiny black hair was worn in a simple queue. Klara, who found him handsome as well as talented, had wondered about this. If he were an ordinary servant, to be out of uniform would have been considered impertinent. Perhaps to dispel that notion, or as a kind of compromise, the man’s queue was heavily braided with a scarlet ribbon which exactly matched his livery.

"Allow me to introduce you
," the Baron gestured. "Fraulein Singerin Silber, this is Herr Akos Almassy, Concertmaster for His Serene Highness, Prince Vehnsky."

The Baron's usual harpsichord player was sick with the prevailing winter ailment, a fierce cold which ended, sometimes, fatally, in the chest. Prince Vehnsky had graciously provided his host with a replacement for their musical afternoon.

The topaz gaze which met hers was disconcertingly direct. Like locking eyes with a cat, she thought. The eyes of Akos Almassy were at once sensual, candid, and bright. She realized that she had seen him, had even heard him play before, although they had not been introduced. It had been the previous winter, at a charity concert.

There would have been no reason to introduce a reigning prima donna to a mere orchestra musician. Klara had been in the audience, her hand held by Max. She remembered Herr Almassy going to the instrument with none of the scraping bustle of a servant, but like a young aristocrat gracefully accepting a task somewhat beneath him.

"I am honored, Fraulein Silber." His voice broke her reverie, so she extended a jeweled hand. Baritone, Klara noted, thinking that his voice matched him well. His German was accented by some exotic mother tongue.

"I sincerely hope that my accompaniment will be acceptable. And please let me add, Fraulein, that the memory of the Eurydice you sang last Christmas will only die when I do."

At his side, the Baron gravely nodded his massive head. He, too, had much admired Klara in the role.

"Thank you, Herr Almassy." Klara smiled at the compliment, offered by a musician who was fully competent to have an opinion. Singing Eurydice had been both a joy and a universally acknowledged triumph. What the nuns had taught was sinful pride
– wicked, but apparently inextinguishable-insisted she should take pleasure in her vocal skill, in her achievements. She could feel a flush rising, coloring her cheeks and tinting her bosom. All the humility drummed in during childhood was often at war with the vainglorious world in which she now moved.

Herr Almassy's eyes followed the progress of the blush with interest. They were extravagantly lashed and there was a hint of the exotic, a tilted fold at the corner. The color was interesting, a hazel that tended, not to green, but to amber, like one of Signor Manzoli’s exotic cats.

And how his eyes were looking, as if he could pierce straight through her chaste exterior to the white-hot essence!

She found Herr Almassys' aquiline nose and high cheekbones compelling, and began to imagine him as some long ago Attila carrying fire and sword across the Hungarian plains. His black braid, thick as horse tail, slipped over one strong shoulder as he bowed to kiss her hand.

His lips grazed her knuckles, and Klara was struck by a series of inexplicable sensations. First, came a startling flash of déjà vu, as if this raw moment had already had a thousand repetitions. Hard on the heels of that came another sensation, one even stranger, perhaps because it had been so long since she'd felt it in relation to another human being – a rush of absolute joy!

His lips were soft and warm. They lingered. To actually kiss the hand and not the air above it was somewhat daring, but the feeling that they were already intimate was so powerful that she experienced, not displeasure, but a thrill. She caught the scent of him, healthy, manly, and something else as well, something musk and green, something from a wild, dark mountain forest.

The salute to her hand completed, he lifted his head. In the instant his eyes pierced hers again and the world of up and down was no more.

She was falling, head over heels, a long dizzying descent through clouds. Falling
….

"Herr Concertmaster." Klara lowered her auburn lashes, able to acknowledge little more
than the bare fact of his existence. There was something she ought to be saying, a brief conversation to organize this impromptu collaboration between them, but the flood of unexpected sensation struck her dumb.

Maria Klara Silber was twenty four. She was beautiful and famous. Before Akos touched her, she had known by the deep breath he drew as he reached for her hand that he was not only a fellow musician who greatly admired her talent, but a man experiencing the body summons of a beautiful woman. This happened often, though she didn't think she'd ever get used to it. Fame and fortune had come so suddenly, carrying her along like a flood. This year, all of musical Vienna resounded with her Christmas triumph, the role of Alceste. Nevertheless, passionate as worship of a Diva could be, she sensed there was more here than that. This was immense, tidal!

Suddenly nervous, Klara locked her fingers together. There was a drop of moisture in the palm where his hand had supported hers. She turned to the harpsichord, to the music set there, resolutely facing the work they must do.

Performing would cure for these queer, vaporish feelings! Klara straightened herself, placed her hand upon the top of the instrument, all gilded and painted with cherubs, and drew several deep breaths. Akos, following her, took a seat at the instrument and leaned forward to softly ask: “Shall it be
Frondi tenere e belle
, then?”

“Yes, Herr Almassy, for our kind Baron loves it even more than he says we ladies do.” They shared a smile, two performers who knew how to please their audience. They spent a few more minutes of collecting themselves, then Klara signaled her companion to begin. Warming her voice earlier with scales, she had experienced an annoying constriction in her chest, but the willow draught had helped. Now she felt a bit better, so supported by Herr Almassy's elegant introduction, she was able to sing, to let the poetry of the words, the reflective beauty of the music, support her.

Shade me from the cruel wrath of the sun,

From the envious strike of the moon
….

Because they hadn't performed together before, it was paramount to maintain eye contact. His interpretation of the score proved properly reticent, but as she grew more confident in their musical connection, Klara relaxed, allowed years of training to carry her. Herr Almassy wound his music around each note she voiced as skillfully as if there had already been twenty rehearsals.

Whenever there was pain in Klara's life, she ran to Music, let it carry her to a world of calm, grace and balance. Music could heal any wound, dry any tear. Music was her tender Mother, the only one Klara had ever known.

She filled her lungs, felt the muscular pleasure of response in throat and diaphragm, heard the rich glory of her voice. As his strong fingers moved upon the black keys, his amber eyes stayed upon her. He was utterly focused on her every move, her every breath.

When the first song was done, Klara curtsied and smiled at the heart-felt applause. On the walls of this elegant reception room, ornamental details flowed up supporting columns and from these onto the vaulted, painted ceilings, where angels and cherubs flew into clouds. She turned to include Akos in the applause, but she didn't quite dare to look into his eyes now that there was no music between them. Her heart raced, and not entirely from the exertion of song.

Perhaps
, she thought,
if I translate this sensation into something recognizable, I can dismiss these queer, disturbing feelings.

Klara was accustomed to the games the men she met played, either because they imagined it politic to feed her vanity, or for the very masculine reason that they had to feed their own. She had learned to flirt lightly, meaning nothing.