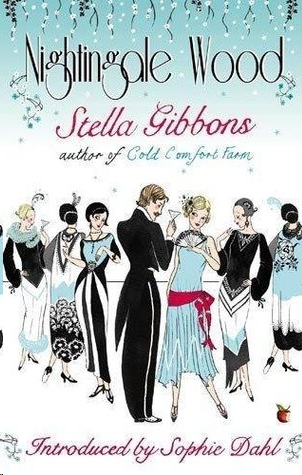 Stella Dorothea Gibbons, a novelist, poet and short-story writer, was born in London in 1902. She went to the North London Collegiate School and studied journalism at University College London. She then worked for ten years on various papers, including the
Evening Standard
. Her first publication was a book of poems,
The Mountain Beast
(1930), and her first novel,
Cold Comfort Farm
(1932), won the Femina Vie Heureuse Prize. Amongst her other novels are
Miss Linsey and Pa
(1936),
Nightingale Wood
(1938),
Westwood
(1946),
Conference at Cold Comfort Farm
(1949),
The Shadow of a Sorcerer
(1955),
The Snow Woman
(1969) and
The Woods in Winter
(1970). In 1933 she married the actor and singer Alan Webb, who died in 1959. They had one daughter. Stella Gibbons died in 1989.

Fort of the Bear

The Shadow of a Sorcerer

The Wolves Were in the

The Woods in Winter

Roaring Tower and Other

Beside the Pearly Water

A Romantic Comedy for Renée and Ruth

‘… all those endearing young charms.’

The occasional words of Essex dialect in the story are
taken from Mr H. Cranmer-Byng’s
Dialect and Songs of
Essex
and
Essex Speech and Humour
.

All the places and people are imagined.

‘She did not look quite a lady, which was natural; as she was not one.’ So wrote Stella Gibbons, author of
Cold Comfort Farm
, as she introduced the heroine of her ninth book, the latterly forgotten treasure,
Nightingale Woo
d. The not quite a lady is grey-eyed Viola Wither, née Thompson, a beguiling widow of twenty-one. Viola is a victim of circumstance, like so many of Gibbons’ female protagonists; a shop girl orphan, married briefly to a bumbling, bullying older man, to whom she felt unable to say no at precisely the wrong moment. In his death she is similarly muted, and when, with a sigh of middle-class duty, her in-laws, the aptly named Withers, summon her from London to live with them in their dour house in Essex, she hops on a train in her cheap black coat and pink satin blouse, meek as a sacrificial lamb.

Their house, ‘The Eagles’, runs thick with thwarted longing. Dwelling there are two daughters, spinsters (in 1930s parlance): the lumpen, unfortunate, thirty-nine-year-old Madge; and Tina, who at thirty-five, with an extreme penchant for dieting, is wasting away in every sense. Their mother, Mrs Wither, seemingly has no fight left in her after four decades with the petty, pedantic patriarch of the family, the hateful Mr Wither. Mr Wither delights in the casual putdown, stamping the most fragile hope in his pitiful daughters with a quick lash of the tongue, forbidding Marge her one desire of a puppy, and tormenting Tina at every opportunity:

‘What time did you say Viola’s train gets in?’ Tina asked her mother; she sometimes found the Wither silences unendurable.

‘Just in nice time for lunch .’

‘You know perfectly well that Viola’s train gets in at half-past twelve,’ intoned Mr Wither slowly, raising his eyelids to look at Tina, ‘so why ask your mother? You talk for the sake of talking; it’s a silly habit.’

It is in this bleak household, in which the clocks are constantly checked to see whether the day is ending, that poor Viola is deposited. And yet …

On the other side of the valley is an entirely different house, a house that sings with comfort and luxury, a house that has the feeling of ‘moving a little faster than other places, as though it were always on the brink of a party’. This is ‘Grassmere’, a polished nouveau paradise, home to the dashing Victor Spring. Victor lives with his mother, Mrs Spring, who only employs the comely because, quite simply, ‘She hated plain maids; they depressed her’, and bookish cousin Hetty, who despises the inertia of a moneyed life, believing ‘The Eagles’ across the way to contain a life full of ‘muted melancholy beauty’. Oh, the grass is always greener.

Add to the cast, amongst others, a ravishing chauffeur living above the Withers’ garage, his mother, a faded village beauty with slatternly ways, a Machiavellian millionaire, a fast fairy godmother named Shirley, and a voyeuristic chorus of sorts in the form of a tramp known as ‘the Hermit’, and you have a sense of the proceedings, because
Nightingale Wood
is, in essence, a sprawling, delightful, eccentric fairy tale.

Gibbons loved this medium, and wrote three books conjuring it in her lifetime:
My American
(1939) borrows from ‘The Snow Queen’;
White Sand and Grey Sand
(1958) is influenced by ‘Beauty and the Beast’; and
Nightingale Wood
, her first endeavour, makes a great curtsy to ‘Cinderella’. Where she strays from the classic fairy tale in these books, and brilliantly so, is that there is no such thing as staid, straightforward good and evil. Prince Charming is charming, yes, but he’s also a little dull, vulgar and complacent. Her Cinderella is beautiful and true, yet a tad apathetic. Each social stratum in
Nightingale Wood
is capable of its own brand of snobbery, which is a theme that permeates all of her books. A greying of characters that are otherwise empathetic stretches to their occasional bigotry, which is deeply jarring to the modern reader. Casual antisemitism and racism is insidious in much of the fiction from this period, and it serves as a stark commentary on the time. Virginia Woolf, T. S. Eliot, Agatha Christie and W. B. Yeats have all been accused of perpetuating this in their work. It is difficult to fathom whether Gibbons herself held such beliefs, or if she was casting judgement (and satirical scorn) upon her culture by making reference to them in her fiction. It is worth noting that these examples are used in conversation, perhaps as a narrative example of the characters’ own narrow-mindedness. To edit them out would be a denial, and so, uncomfortable as it is to stumble upon them, they remain as a harrowing reminder of what went before.

It is staggering for a writer with an archive spanning twenty-five novels, four volumes of poetry and three volumes of short stories, to be best (and sometimes solely) known for one work.
Cold Comfort Farm
was Stella Gibbons’ first novel, published in 1932, when she was thirty. She had grown up in a family similar to the ones she parodied so well: she was middle class, educated, and her father was a doctor. In their local community of Kentish Town he was publicly lauded for his humanity; in private, he was a domineering and violent man. Such roots must have had a profound impact on her, regardless of her career trajectory, but to my mind they also tattoo her writing: the men in her books are regarded somewhat warily, whatever their station, and she writes of a woman’s plight with sensitivity, buckets of humour, and ceaseless compassion. The women of
Nightingale Wood
each suffer suffocating consequences of their sex. Perhaps the most succinct surmisal of the 1930s female lot comes from Viola’s best friend, Shirley, who says wryly, ‘Vote, Marie [Stopes], perms, and all, we can’t do anything.’

But with the shadows we have light, and, again, it is testament to the wily talent of Gibbons to dance between the two with her light touch. One realises that
Nightingale Wood
doesn’t have just one heroine; it has many, and each is duly rewarded for her pains. There is romance galore: a transformative dress and a ball; much dizzy kissing in hedgerows and beyond; spying, retribution and runaways; fights and a fire; poetry and heartbreak; a few weddings
and
a funeral; and a fairy-tale ending with a twist.

What luxury to stumble upon this quirky book, and the fascinating modern woman who wrote it. It is a rare unadulterated pleasure, and high time for its encore.

Without further ado – I give you
Nightingale Wood
.

It is difficult to make a dull garden, but old Mr Wither had succeeded.

He himself did no work in the grounds of his house near Chesterbourne in Essex, but his lack of interest in them and his dislike of spending money influenced the gardener. The result was a poorish lawn and a plaster rockery with very little in it extending as far as the eye could reach, and a lot of boring shrubs which Mr Wither liked because they filled up space and gave little trouble. He also liked the garden to look tidy, and on a fine April morning he stood at the breakfast-room window thinking what a nuisance the daisies were. There were eleven of them, out in the middle of the lawn. Saxon must be told to get them up.

The Runes of the Earth: The Last Chronicles of Thomas Covenant - Book One by Stephen R. Donaldson
The Spirit Thief by Rachel Aaron
Her Imaginary Husband (Contemporary Romance) by Lia London
Boystown 7: Bloodlines by Marshall Thornton
Women in the Wall by O'Faolain, Julia
A Fall of Silver by Amy Corwin
The Bootlegger’s Legacy by Ted Clifton
The Parting Glass by Emilie Richards
A Classic Case of Murder: Detective Crime Mystery Suspense (Ben and Mark Detective Investigator Mystery Series) by Parker, Melinda
A Lowcountry Wedding by Mary Alice Monroe