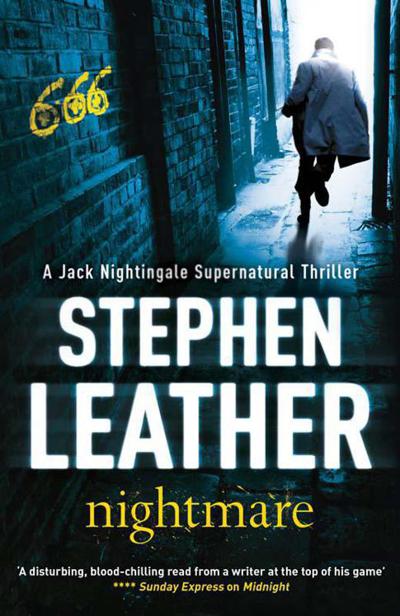 First published in Great Britain in 2012 by

The right of Stephen Leather to be identified as the Author of the Work has been asserted by him in accordance with the Copyright, Designs and Patents Act 1988.

All rights reserved. No part of this publication may be reproduced, stored in a retrieval system, or transmitted, in any form or by any means without the prior written permission of the publisher, nor be otherwise circulated in any form of binding or cover other than that in which it is published and without a similar condition being imposed on the subsequent purchaser.

Jack Nightingale opened his eyes to find the barrel of a police-issue Heckler & Koch MP5 carbine about an inch from the end of his nose.

‘If that’s anything other than your dick in your hand I’m pulling the trigger,’ growled the police marksman holding the weapon. He was wearing a Kevlar helmet and protective goggles.

‘That’s not the official police warning, is it?’ said Nightingale. Two more armed police appeared at the end of the bed and their weapons were also aimed at his head. ‘What the hell’s going on?’

The marksman stared at Nightingale with unblinking grey eyes. ‘Move your hands very slowly from under the quilt,’ he said, saying the words slowly and clearly.

‘I don’t have a gun and I’m stark bollock naked,’ said Nightingale.

‘Just show us your hands, nice and slowly,’ said the marksman.

Nightingale did as he was told, sliding his arms from under the quilt and raising them. A fourth officer appeared and grabbed Nightingale’s wrists, quickly fastening them together with a plastic tie.

‘Are there any weapons in the flat, Nightingale?’ asked a voice from the end of the bed. Nightingale squinted at the man. He was wearing a bulletproof vest over a dark blue suit. It was Superintendent Ronald Chalmers. Tall with greying hair and flecks of dandruff on his shoulders.

‘What the hell’s going on, Chalmers?’

‘We’re going to be searching your flat from top to bottom so you might as well tell us now,’ said the superintendent. ‘Do you have any weapons here?’

Chalmers nodded at the door. ‘Take him through there and start on this room.’

The officer who’d tied Nightingale’s hands pulled him out of the bed.

‘At least let me hide my modesty,’ protested Nightingale.

The superintendent picked up a sheet and threw it at Nightingale. Nightingale caught it and the officer pushed him through the door to the sitting room. Two more armed officers in black overalls and bulletproof vests and helmets stood by his dining table, cradling their weapons.

Nightingale wrapped the sheet around himself and sat down on his sofa. A portly man in dark blue overalls was kneeling next to a plastic toolbox by the front door. ‘Did you pick my lock?’ asked Nightingale.

‘I’m just doing my job,’ said the man. He was in his sixties, his bald head spotted with dark brown liver spots.

‘Yeah, well, I hope they’re paying you overtime,’ said Nightingale, looking at his watch. It was five o’clock in the morning and still dark outside.

Chalmers walked out of the bedroom and glared at Nightingale. ‘Where’s the gun, Nightingale?’

‘We’ll tear this place apart, if we have to,’ said the superintendent.

Chalmers reached inside his jacket and pulled out a sheet of paper. He tossed it onto the coffee table.

‘Warrant or not, the Met’s going to be paying for any damage,’ said Nightingale.

A uniformed sergeant appeared at the door. Chalmers turned around to look at him and the sergeant shook his head. ‘Kitchen and bathroom,’ said Chalmers. ‘Then the spare bedroom.’ The sergeant went back into the bedroom to speak to his men. Chalmers pointed at Nightingale. ‘Get some clothes on,’ he said.

‘Are you arresting me?’

‘I will if you don’t get in there and get dressed,’ said the superintendent.

Nightingale held up his hands. ‘How am I supposed to get dressed like this?’

Chalmers sighed and took a Swiss Army knife from his pocket. He pulled out a small blade and cut the plastic tie. It fell to the floor and Nightingale rubbed his wrists. ‘What’s this about, Chalmers?’ he asked.

Nightingale was taken down the stairs to the street handcuffed to a burly constable wearing a bright yellow fluorescent jacket over a bulletproof vest. Nightingale had pulled on black jeans, a blue pullover and a leather jacket but had forgotten to pick up his cigarettes and lighter from the bedside table. ‘Don’t suppose you’ve got a cigarette on you?’ he asked the cop.

‘Filthy habit,’ grinned the man, pulling open the side door of the police van. It was a grey Mercedes Sprinter van with TSG markings. The Territorial Support Group. The Met’s heavy mob. Behind it were two blue saloons. Armed cops were stowing their gear into the boots.

‘Yeah, well, it’s not as disgusting as breaking into people’s homes at the crack of dawn,’ said Nightingale.

The cop climbed into the van and jerked the handcuffs to pull Nightingale inside. There were two armed police officers in black overalls, bulletproof vests and Kevlar helmets sitting at the back, cradling MP5s. Nightingale grinned and waved with his free hand. ‘Expecting trouble, boys?’ he said as he sat down.

The two men stared at him impassively.

More armed officers were piling into the back of a Volvo V70 Armed Response Vehicle as the driver turned on the siren and flashing lights. Curtains and blinds all the way down the street began to twitch.