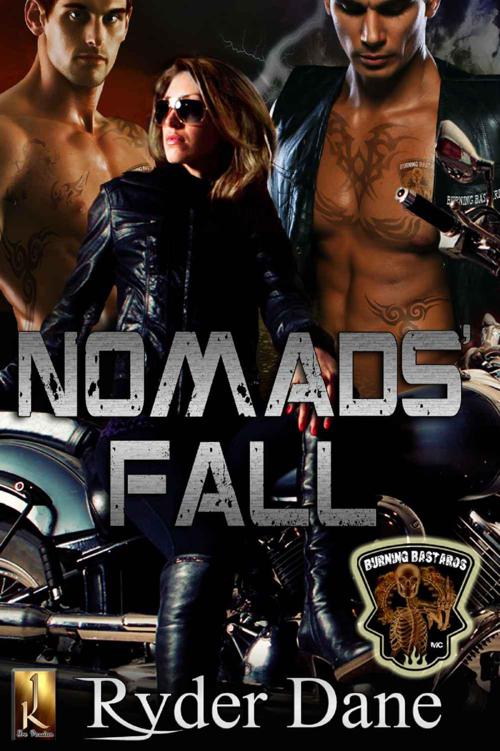 In book two of the Burning Bastards MC: Jolly has been on the run for quite a while when circumstances cause her to stop and take stock in her life.  She finds a job and a friend to lean on, the only drawback—the men who are constantly around.

Demon and Knight know trouble when they see it.  And it comes in the form of a woman who brings a lot of things out of them.  Things they don't want to feel.  They know she is carrying secrets and even with the club having its own troubles right now, there is no way they can leave Jolly alone.  While they know they need to concentrate on a deadly threat to the Bastards, they also need to make a decision about the woman who has them considering changing their ways.

Jolly feels she can't trust anyone, money talks and when a predator is as powerful as the one chasing her wants something done, money can talk louder than she can scream.  How can she trust a gang of bikers whose only loyalty is to their own—even if the two that have self-appointed themselves her future demand she does.

This eBook is licensed for your personal enjoyment only. This eBook may not be re-sold or given away to other people. If you would like to share this book with another person, please purchase an additional copy for each recipient. If you are reading this book and did not purchase it or it was not purchased for your use only, then please return to Smashwords.com, and purchase your own copy.

This is a work of fiction. Names, places, characters and incidents either are the product of the author’s imagination or are used fictitiously and any resemblance to any actual persons, living or dead, organizations, events or locales are entirely coincidental.

No part of this book may be reproduced, stored in a retrieval system, or transmitted by any means without the written permission of the author and publishing company.

Please always be aware of where you are purchasing your electronic books and from whom. Only purchase from reputable, licensed individuals such as Amazon, Barnes & Noble, iTunes,
etc.
If ever in doubt, let the author know of a suspected site illegally selling their works—remember to include a link to the site where you have found a book you suspect of being pirated. It only takes a moment of your time, but you will forever have the gratitude of an author.

About the eBook Purchased

Your purchase of this eBook allows you to only ONE LEGAL copy for your own personal reading on your own personal computer or device. You do not have resale or distribution rights without the prior written permission of both the publisher and the copyright owner of this eBook. This eBook cannot be copied in any format, sold, or otherwise transferred from your computer to another through upload to a file sharing peer-to-peer program, free or for a fee, or as a prize in any contest. Such action is illegal and in violation of the U.S. Copyright Law. Distribution of this eBook, in whole or in part, online, offline, in print or in any way or any other method currently known or yet to be invented, is forbidden. If you do not want this eBook anymore, you must delete it from your computer.

If you find any e-books being sold or shared illegally, please contact the author or JK Publishing, Inc.

To my readers, you make me smile.

Excerpt from Sanctuary Within the Breed

Excerpt from Beat to Their Heart

Excerpt from Bed of Roses

One day soon he planned to take some time off. He needed a vacation. Hell, he didn’t really need to get away, he just needed something different. Being an Enforcer for The Burning Bastards MC was as exciting as it got within the club. Until the Bastards allowed the Chiefs to patch over, he and Demon had been soldiers in the club. They’d graduated to Nomads, or as some called them Enforcers, for a few years now, they normally traveled together on club business. Lately they’d drifted, the close friendship was not like it used to be. Now instead of both men going on a run, it was one man, and it bugged the hell out of him. He loved the job when there was work to be done. Right now, the only work he needed to finish was to find Dorsey, and sooner or later he would be found. The rat bastard was sanctioned as John Doe now.

Knight had just gotten back from yet another wild goose chase. He was hunting Dorsey, and every small lead had to be checked out. By the time he’d gotten to Conaway, Arkansas, the fucker was gone. The place was crawling with military personnel, and just being around the uniformed men and women while they gassed up their vehicles at the same place he’d filled up the Triumph made him feel guilty for leaving the service after his second tour. It took a few hundred miles on the road for him to blow the guilt off. He’d done what was necessary at the time for his mental health. He was becoming a twisted sonofabitch at the time, so much so the sight of death stopped bothering him and he started taking chances that should have killed him. The turning point for him was when two newer soldiers decided if he could do the dangerous shit and live through it, they should be able to as well, after all they were twenty-two and bulletproof right? Either they hadn’t listened to their training, or they thought youth and arrogance would save them. One was a freckle faced redhead and the other was Nordic blonde. He was the one to find their bodies, at least what was left of them. He’d also killed eight men that day to make sure they never killed another American soldier. The only way for him to recover the bodies was to go through the enemy, and although it’d taken all day, luck had been riding his shoulder. The downside of that luck was he kept shooting the men he’d already killed. He ran out of bullets and used their own guns to continue riddling their bodies full of lead long after they’d bled their last drops onto the desert sand.

He’d become even more hardened after that day, nothing stopped him from killing the enemy, if they could breathe, they could cause harm, and he was all about keeping the bastards from causing harm.

He tossed the dart, hitting the bullseye square on, and took the cash Heckle handed him. “You’re one lucky motherfucker, always hitting the pussy, even with darts eh?” The dartboard was made more interesting by the fact that someone had taken a picture of Sylvia’s naked ass bent over to show her cunt lips and asshole. They’d taken the metal cage from the original dartboard and placed it over the picture, with the high score bullseye being in the middle of the pussy shot.

Heckle was one of the coldest men Knight knew. He was also the type to gamble the dimes from a dead man’s eyes, even if he had to dig up a corpse to get them. He once bet the tranny he’d brought to the club late that night would seduce Demon into letting him suck his cock. That hadn’t gone over well. Heckle almost won that bet, until the guy saw the size of Demon’s junk and balked. He’d lost his sexy shemale voice and yelled, “Fuck no,” when Demon grabbed his head and shoved it toward his overly impressive prick. Demon almost lost his shit when he figured out he’d been romanced by a guy. He was homophobic to a fault, and Heckle was lucky to have escaped with his teeth still in his head.

The only time he didn’t bitch about seeing another man’s erect cock, was when he was sharing a snatch. He even admitted to liking the feeling of the friction of another cock massaging his between the membrane of a woman’s asshole and cunt. Slapping balls hadn’t been mentioned at the time, but he seemed to have no problems with that either. Knight was one of the few men Demon would share a woman with, and while he was sure there was more to the story, it was Demon’s business and his life. They might be best friends, but some lines didn’t get crossed, like asking your best friend if there was some kind of history.

The door opened behind him and from the look on Pinky’s face, you’d think they were being robbed. Her mouth opened to scream, and his hand went to his waistband before he turned slowly toward the doorway. Demon was standing in the doorway with blood dripping in his eye, and a woman’s bleeding body was hanging in his arms.