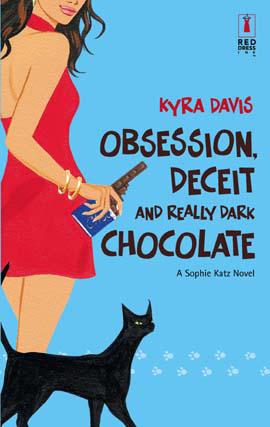 To my readers. Your letters and e-mails of support
and praise never fail to inspire and motivate me.

I want to thank my wonderful editor, Margaret Marbury, for all of her help and encouragement, and Police Chief John Weiss for helping me with this book’s ending. I also want to thank my stepbrother, Chris Sullivan, my mother, Gail Davis, and my stepfather, Richard Sullivan, for taking care of my son while I wrote this novel. Last but absolutely NOT least I want to thank my son, Isaac, for being my biggest fan and greatest motivator. Isaac, I love you with all my heart and soul.

Why sleep with the enemy when you can screw ’em?

IT’S NOT OFTEN OFTEN THAT AN OLD FRIEND AND MENTOR ASKS YOU TO SEDUCE
her husband. I suppose it was the bizarre nature of the request that made me want to do it. Or perhaps it was because I knew that Melanie O’Reilly was at least partially responsible for my becoming a novelist. Or maybe I just agreed because I thought it would be a good way to get my mind off my ex-boyfriend, Anatoly Darinsky.

Whatever. The point is that after years of very sporadic contact Melanie invited me to lunch and asked if I would do her a big favor. My initial assumption was that she wanted me to donate some money to one of her favorite organizations or charities—the Salvation Army, the Symphony, the Boy Scouts…what have you. It even occurred to me that she wanted me to attend one of those five-hundred-dollar-a-plate dinners to support Flynn Fitzgerald, the majorly right-wing Contra Costa County congressional hopeful whose campaign was currently employing her husband, Eugene. The last really would have been a huge favor since I disagreed with almost everything Fitzgerald stood for, but for my favorite former writing professor I would have done it. But this…this one came out of left field.

It seems that Eugene had not been the same since he and a few of his evangelical buds had returned from a Moral Majority road trip, an excursion not unlike the MTV Rock the Vote road trip, except this expedition involved more Jesus talk and less talk of body piercing. Melanie was convinced that the Jesus van had doubled as a magnet for wayward sluts, and that her husband had been nibbling on the forbidden fruit.

But I digress.
My
mission had nothing to do with Jesus, nor was I supposed to emulate the Virgin Mary. My mission was to tempt Eugene by behaving like Mary Magdalene during her party years. Melanie explained that I was the only “younger woman” friend who had never met her husband. At thirty-one I wasn’t sure I still qualified as a younger woman, but it was true that I had never met Eugene O’Reilly. I was supposed to have gone to their wedding but a bout of strep throat put an end to those plans.

I wasn’t going to sleep with him, of course. Apart from the fact that this was only a fact-finding mission, one look told me that the man’s weight had to be somewhere
under
one hundred and twenty pounds. If a guy looks like Brad Pitt I’ll willingly compromise my political ideals in exchange for a little face time, but when confronted with a conservative who’s twice my age and skinny enough to make me feel fat, I emphatically refused to cross the party line.

I’d simply be testing him: if Eugene O’Reilly wanted to play “break the commandments” with me I would simply ditch him and report back to Melanie. If he resisted my charms, all was right with the conservative world.

I took one more sip of the lemon drop I had been nursing while scoping him out from my seat in the darkened corner of the Antioch bar, screwed up my courage and then crossed the room to Eugene.

“Is this seat taken?” I pretended not to notice the way my short red dress rode up when I climbed onto the bar stool.

The man didn’t even bother to look up from his Scotch and soda. “Not that I’m aware of.”

So far so good—still, I couldn’t help but feel a little hurt. I mean really, when an older man doesn’t bother to give you the time of day after you stick your boobs in his face you have to question your own sex appeal.

I tried to discreetly glance at myself in the mirror behind the bar. No major pimples, and as far as I could tell I didn’t have food in my teeth. My hair was a little out of control but no more than usual. My father was African-American and my mother had curly hair that was typical of her Eastern European Jewish ancestry, so when it came to my hair “a little out of control” was the best-case scenario.

I rested my elbow on the bar and tried another tactic. “I’ve never been to this place before.”

“Mmm.” He took another sip of his Scotch and casually looked around the room. I caught a glimpse of his hands, which seemed to be one of his few saving graces. They were big and strong…I’m into hands, but they need to be attached to a body that is at least a little appealing. Anatoly had great hands, and arms, and shoulders…but I wasn’t going to think of him right now or ever again. I was over Anatoly. Really.

“I don’t usually go to bars,” I said, bringing my focus back to the task at hand, “but tonight I just had to get out of the house. You ever feel like that? Like you just need to go somewhere no one knows you and forget your troubles?”

Eugene looked at me for the first time. “What are you trying to forget?”

I hesitated. I hadn’t really worked this story out in my head yet. “Oh, you know…family stuff.”

He nodded and turned his attention back to his Scotch.

“My younger brother dropped a big bomb on the whole family today,” I said quickly. In reality, the only sibling I had was a younger sister, but he didn’t need to know that.

“Oh?” His disinterest was palpable.

Eugene snapped his head back in my direction. “I’m so sorry.”

“It gets worse,” I said, encouraged by the reaction. “He has a boyfriend and they’re going to Massachusetts to get married.”

“No!” Eugene put his glass on the bar with a thud. “Did anyone see this coming?”

I shook my head and looked away. “He was always such a good kid. He consistently made the honor roll, played lots of sports in high school…he even got a full scholarship to Syracuse University.”

“Syracuse is a good conservative town.”

“I know! That’s why everyone in the family was so happy when he decided to go there instead of to the other university he was accepted to—” I leaned over and lowered my voice to a tremulous whisper “—UC Berkeley.”

“Yes, but what? Here we all thought he was busy studying and partying it up with a bunch of nice Republican fraternity brothers, and as it turns out he was spending all his free time campaigning for…for…” I dropped my head in my hands in what I hoped looked like a display of grief rather than an attempt to hide a smile “…for Hillary Clinton!”

“My God! Your parents must be devastated.”

“Oh, they are, and so am I. I keep replaying the whole sordid event in my head.” I glazed my eyes and pretended to relive the moment. “I’m eagerly awaiting his arrival with my parents at their place, he walks in the door, and before you can say ‘Green Party’ my whole world is turned upside down!”

Eugene put a hand on my arm. I held my breath and waited for him to use his thumb to stroke my skin or to somehow make the gesture more intimate, but he released me quickly, leaving me with nothing but the sense of being comforted by a well-meaning stranger.

“You need to have faith that your brother is going to be okay,” he said in a tone that was much gentler than what I was expecting. “People sometimes make mistakes, but with the love and the guidance of a good family many find their way back to the path of righteousness. You can’t give up on him.”

I looked up into Eugene’s eyes, expecting to see some kind of mad religious fervor, but all I saw was sincerity and conviction. He waved the bartender over. “Sir, I’d like another Scotch and soda and the lady needs a drink as well.” He turned and smiled at me. “Put it on my tab.”

I ended up closing the place with Eugene. I kept waiting for him to make a move on me, but everything he did seemed to be motivated by a desire for companionship. He sucked down a countless number of cocktails, and while the alcohol definitely made him more talkative, it didn’t make him more flirtatious.

“This country’s going to hell in a handbasket,” he said as he stumbled to his feet and tried unsuccessfully to help me put on my coat. “Immorality is everywhere—on the TV, radio, don’t even get me started about the Internet.”

“Tell me about it,” I said as I gently guided him out of the bar and into the warm night. “There’s this Web site, www.womenserotica.com—it’s despicable. I go on it every day to read the new entries and I’m horrified every time.”

“Exactly what I’m talking about!” Eugene slurred, too drunk to pick up on my sarcasm. “How are we suppose-ta raise children with good solid Christian values when they’re continually confronted with evil temptations?”

I nodded gravely. “I’m having a hard enough time just trying to shelter my cat from the filth they’ve been promoting on
Animal Planet!
Do you know that they had a whole show on elephant sperm?”

“My God!” Eugene shook his head. He looked at me in a blatant attempt to focus. “You realize that you’re not fit to drive.”

My lips curved into an amused smile. “And you think you are?”

“No, no. I’m gonna walk back to my hotel. I live in Walnut Creek. I’m jus’ here on business, my hotel’s only a mile away,” he slurred.

“It’s two in the morning, kind of late for a long walk.”

“Normally I’d take a cab,” Eugene conceded, “but tonight I need fresh air. You’re not the only one who had a bad day, ya know.”

I spotted a park bench on the other side of the street. “Why don’t we sit down for a while and talk? Like you said, I can’t drive and you’re obviously not in any big hurry to get to sleep, so you might as well hang out with me and talk while I sober up.”

Eugene nodded and followed me to the bench. Out of the corner of my eye I saw a green SUV parked at the end of the city block. Other than that, the area had already been deserted. The vehicle probably belonged to one of the bartenders closing up. I sat down on the bench and patted the seat next to me, but Eugene hesitated.

“My wife’s been impossible lately, but I believe in the sanctity of marriage,” he said matter-of-factly. He sat down next to me and gazed at me with bloodshot eyes. “I
practice
what I preach.”