Read Odyssey In A Teacup Online

Odyssey In A Teacup 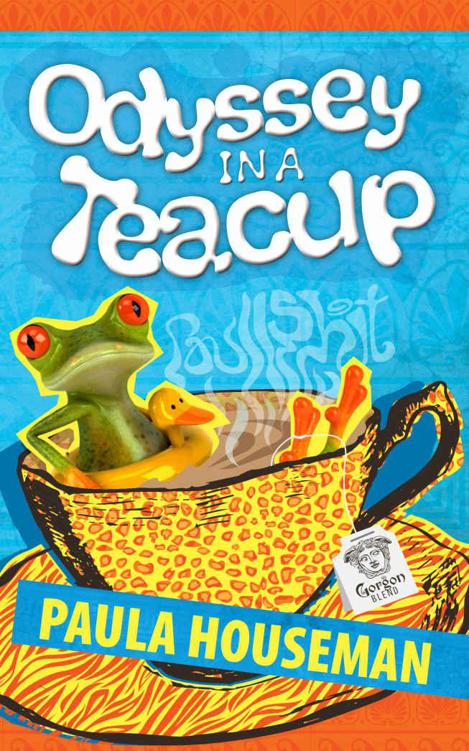 ODYSSEY IN A TEACUP

Title: Odyssey in a Teacup

For Kelly and Jared

Part One: In Hot Water

Chapter Four: Not with a Bang but a Whimper

Chapter Seven: Lights on, Nobody Home

Chapter Nine: Wind Beneath My Minge

PART ONE:
IN HOT WATER

‘Hello, I’m Ruth Roth,’ I said to my bedroom mirror when I was five. I talked to it often, always starting with hello because my generation was brought up with manners ... or effective social conditioning, anyway.

This time, it replied with a bitchy reminder. ‘Yes, but you’re
just
Ruth. Not Ruth Michelle, nor Ruth Katherine. No middle name; one syllable. Not like Myron.’

Eleven months older than me, my brother My-ron Ste-phen Law-rence Roth got two middle names and six syllables. Even to my five-year-old sensibilities, the difference in naming reeked of injustice, so I whined through my gappy milk teeth to our father, Joe (Jo-seph Ben-ja-min Roth).

‘It’th not fair! Why did Myron get two middle name’th and I got none?’

‘Because the extra initials will look good printed in his cheque book.’

What fucking checked book? He’s only six years old!
Oh, I knew these things were adult books, but still, fair’s fair. ‘I want a checked book too!’

And there it was. Four bloody words that set a precedent for my standing in the family, and beyond. Then Syl-vi-a Es-ther Roth, our mother, put in her two cents’ worth, not only sealing the deal, but supergluing it, further contributing to my thorny relationship with mirrors.

‘
Oeuf!
What difference does it make?
Pest!
’

Our parents were born in Egypt of European ancestry. They are multilingual but mainly speak to each other in French.
Oeuf
means egg. Others might preface an irritated response with ‘Shit!’ Or ‘Godammit, child!’ But not Sylvia. I never questioned this as I assumed it was the norm, just like her use of
pest
. This word often closed a sentence, kind of like ‘Amen’ at the end of a prayer or creed. If it is so and so be it, then what’s to question?
Pest
thus became a metonym for Ruth.

My feelings about being a nuisance not worthy of a middle name grew legs on my first day in Grade 1, when the teacher, Mrs Taylor, called the roll:

Mrs Taylor paused for a bit before she said, ‘Roth, Ruth.’

She paused again. ‘Don’t you have a middle name?’

‘Oh.’ She said it like it was something bad. The rest of the class must have thought so too because they sniggered.

I often fantasised about what it would be like to have a different name, an extra one, or even some extra syllables. It wasn’t like it was a big ask. And as we students mastered the vowels in the early years, I got my wish. Sort of. Shaun Farr, a very clever boy in my class, came up with the nickname, Rath-Reth-Rith-Roth-Ruth. That the other kids could even be bothered saying it whenever they spoke to me filled me with a sense of importance. Still, the name Ruth, in and of itself, brought its own problems.

My well-meaning, heavily accented Yugoslav, lots-of-syllables aunt, Miroslava (Miri), pronounced ‘th’ as ‘t’. So to her, I was ‘Root’.

Joe was dirty-minded and foul-mouthed, so from an early age, I knew that a root wasn’t just the underground part of a plant. My older cousins knew it too, and because we had to spend every Sunday with the relatives, I was well and truly ‘rooted’ by early adolescence. It was only then that it became clear there was a need to stand my ground with Sylvia.

‘I AM NOT SEEING THESE PEOPLE ON SUNDAYS ANYMORE, YOU CAN’T MAKE ME!’

That she demonstrated a political bent was pretty impressive; that she got her way was an outrage. But even when I was old enough to exercise my civil liberties, I couldn’t escape my name, and yet another challenge that came with it.

The Adventures of Barry McKenzie
, a movie released in 1972, popularised the expression to ‘cry Ruth’, meaning ‘to vomit’. To ‘cry Ruth’ became a national catchphrase. Friends, relatives and acquaintances fake hurled around me
ad nauseam
. It was awful at first, but then—in a perverse kind of way—I rejoiced in it. Being Ruth made me the centre of attention. Only one name with only one syllable but by God, I was one of the cool people! At least until the saying lost currency and I was once again uncool. Even knowing I had the same name as a biblical heroine didn’t appease me.

I might have been satisfied if I didn’t feel like a gatecrasher. Sylvia had fallen pregnant with me when Myron was only two months old. It was not exactly a dream come true. No woman in her right mind would want to get pregnant on the back of giving birth. It makes sense then that I was accidental, not incidental, but they (she and Joe) told me I was a ‘mistake’. Big difference between an accident and a mistake. Huge
one! That label—feeling unwanted—was so unfair because even though there had been a nine-month gestational war between Sylvia and me, I slipped out of her vagina quickly and smoothly, rather like the soldiers slunk out of the Trojan Horse. Sylvia had conveniently forgotten her epic labour with Myron and she forgave him for the nasty perineal tears he’d caused, probably because he toed the line thereafter, where I was always stepping on it and over it.

Myron the sycophant was their jewel in the crown, invested with their hopes and dreams. I was the misfit, like the ugly duckling who ended up in the wrong family. I’m not ugly, though; Joe often told me I’d get by because of my looks. But he never said anything about substance. And just like in the story, being different, especially in the fifties and sixties, translated to ugly. Or invisible.

If you could have seen me back then, you’d have noticed the difference in appearance between them and me. And that hasn’t changed. Sylvia, Joe and Myron are tall, pale-skinned and blue-eyed. Sylvia and Myron have thick, blond hair; Joe’s hair—most of which he lost in his twenties—is thin and Grecian Formula brown. All three of them are double-chinned butterballs with appetites like Jabba the Hutt, and the same sluggish metabolism. If I were visible back then, it would have surprised you to know that my appetite could match theirs and Jabba’s (seems
my
thyroid works much more efficiently). If I were visible, you’d have seen the smallish, oval face, the large hazel eyes, olive skin, and reddish, mid-brown hair—not straight, not curly, but with a definite kick in it, parted on the left and extending a couple of inches below my shoulders. And you would also have noticed the high waist and long legs, giving the impression of height. But this was an illusion. Even as an adult, I’m a short-arse, a neat sixty-three and a half inch package. Convert me to a one hundred and sixty-one-centimetre package, if you prefer. In fact, when a desire to fit in took hold, I’d often lapse into everyman’s land, and could be converted into practically anything you wanted me to be. It all started with this:

Tried that on for size; didn’t like it. Nor did she, it seemed:

‘
Oeuf!
Why do you have to be like everyone else?
Pest!
’

Despite Sylvia’s browbeating, I was never quite the right fit for her, and her hectoring could be dispiriting. She used to tell me that if I felt intimidated by a schoolteacher, I should imagine them on the toilet. I imagined
her
on the crapper one night just after we sat down for dinner and she started nagging. It didn’t work. Then, an image came to mind quite unexpectedly: an old blonde mare whinnying—
nei-ei-ei-ei-eigh
,
oe-oe-oe-oeuf, nei-ei-ei-ei-eigh
—snorting, baring its big pink gums and big yellow teeth, massive lips retracted and flapping away through the nickering. Now
this
worked for me. But it backfired because I started laughing. Sylvia reared up on her hindquarters and slapped me down.

Living with this woman was punishing. Luckily, I had an ally close by in my cousin, Ralph Brill (single syllable, no middle name; he didn’t give a shit). Also an outsider in his family, Ralph and I were best friends, kindred spirits. We were separated by only one week (I was first), but inseparable and in sync (one of our many commonalities was our names; ‘to ralph’ is American slang for ‘to vomit’). He and I bonded as infants from the moment we could see a world beyond our own feet and hands.

Unsurprisingly, as a baby I only ever commando crawled. Ralph, on the other hand, bear crawled on his hands and feet like a chimp or ... a bear. Our mothers often got together, and when Ralph and I grew tired of our quadrupedalling and slithering around the floor, we could be found asleep in a corner with our arms around each other. Like twins. They thought it was
so
cute. Later on, though, the fact that Ralph and I didn’t see the world through the eyes of our nearest and dearest was not considered so cute. We were soon labelled the black sheep of our respective families.

The First Collier by Kathryn Lasky
Ranch Hands by Bonnie Bryant
Out of the Mist by EvergreenWritersGroup
The Master by Melanie Jackson
Married to the Bad Boy by Letty Scott
Chasing Harry Winston by Lauren Weisberger
Blue Genes by Christopher Lukas
Riddley Walker by Russell Hoban
This Time by Ingrid Monique
The Dead in River City by McGarey, S.A.