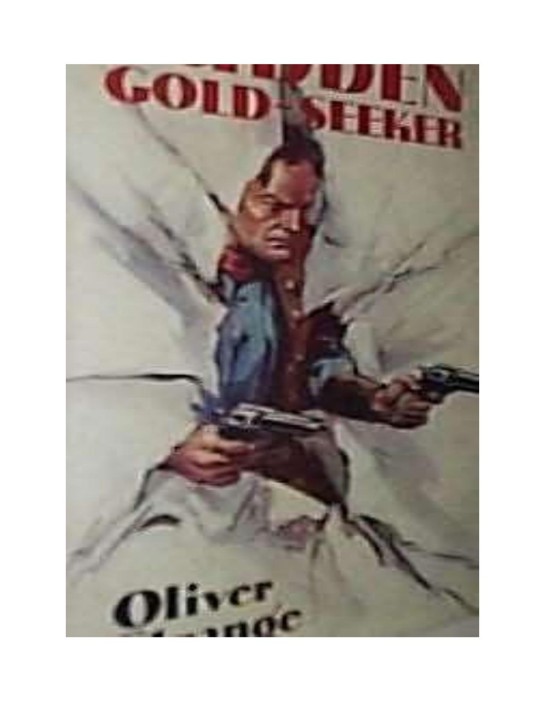 (Book 06 in the
Sudden Westerns series)

“
You meanin’
to call me a liar’?” The voice was high-pitched,
immature, but it carried an underlying threat of violence. The speaker, a lanky
boy of twenty, dressed in the rough garb of the frontier, stood glowering at
the man who had dared to doubt him. This was an older fellow, more than twice
his age, with a gnarled face upon which the challenge evoked a disarming grin.

“Aw,
Tim, I got drunk with yore dad the day you was born,” he said, and the roar of
laughter which followed the naive confession relieved the tension. “All I’m
sayin’ is, if the stuff is there, why are you here?”

“I’ll
tell you, Preedy,” the boy replied. “I come back to get the fixin’s—tools,
supplies, an’ help—it ain’t no one-man proposition.”

“We’ll
be sorry to lose you, Dabbs,” the saloonkeeper said gravely. “You did oughta
buy a farewell round.” His chuckle started another burst of merriment, in
which, after a moment’s hesitation, the victim joined.

“That’s
a good idea,” he grinned. “Set ‘em up, ol’-timer, an’ charge ‘em to me.” The
landlord’s cheery face fell—Dabbs was already in debt to him, and the Pioneer
Saloon—though the only one in the settlement—was hardly a gold-mine. However,
he had brought it on himself, and with dexterous turns of the wrist he sent
glasses spinning along the bar, one stopping before each customer. The bottle
followed, gyrating dizzily until it reached the end of the line; the thirsty
ones poured and passed it. The trick produced the applause the performer
expected.

“He’ll
shore have to be to git the coin outa Dabbs,” his neighbour grinned.

The
founder of the feast heard the remark and joined in the grin. “I’ll pay him
when I come back with the other scum from the Black Hills,” he said.

Some
months previously vague rumours of gold discoveries in Dakota had come to
Wayside and a few of the more optimistic of the settlers had departed
westwards. When no news of them arrived, those who had remained behind nodded
knowingly and mentally patted themselves on the back. The reappearance of young
Welder, the blacksmith’s son, had revived the excitement and though it was not
yet noon, brought every male in the place to the saloon, the common centre for
the receipt and distribution of news. Sceptical as some of them might be, the
boy’s story had aroused the appetite, dormant in every human, for easily-gotten
gains.

“What
do you think o’ this, Welder?” the saloonkeeper asked the blacksmith.

“Huh!
What you know o’ the ‘49? You
warn’t
pupped then.” The
interruption came from a small man whose white hair and beard lent an appearance
of age which the black eyes beneath the bushy bleached eyebrows, and the
activity of his spare form, belied. His shrill cracked tones contained a jeer
which brought a flush to young Welder’s face.

The
little man cackled derisively. “Yeah, from fellas who was never within five
hundred miles o’ California,” he sneered. “If you wanta know ‘bout them days,
come to me, son; I was there, from start to finish.
Gold?
the
place was lousy with it. Why, you could pull up a
tuft o’ grass an’ shake the yeller stuff outa the roots in the pan. One fella I
knowed cleaned up fifteen thousand dollars in less’n a fortnight just doin’
that, an’ the men who washed the ground he was too lazy to put a shovel into
got five times as much.”

“That
was when you made yore pile, Snowy, eh?” a listener put in slyly.

The
prospector whirled on him. “Pile?” he shrilled. “I made three, an’ spent ‘em—what
else is gold for?
an
’ I’ll make another when I’m good
an’ ready.” They laughed at this, for Snowy—regarded as a little mad—
was
the butt of the settlement. Nothing was known of him,
not even his real name. He did no work, and disappeared at intervals for
months, but always had money for liquor, of which he consumed an inordinate
quantity. He was reputed to possess a secret hoard, but all attempts to trail
him on his excursions had proved futile, and a search of the dug-out in which
he lived revealed only the sordid poverty of its interior.

“I
heard Deadwood is getting to be a biggish place
.“This from a
tall, dark man, not yet forty, with a sallow, thin face, aquiline nose, and
slumberous eyes, in which lurked a cold passion.
His long-skirted black
coat, “boiled shirt,” and neatly tied cravat might have been worn by a
minister, lawyer, ‘or card-sharp, and the fact that his hands were carefully
tended pointed to the latter. So Wayside guessed and missed the mark only by a
little, for although Paul Lesurge—thus he named himself—was not a professional
gambler in the Western sense of the term, he was an adventurer, willing to take
a chance in any enterprise which promised profit, and utterly indifferent as to
the means by which that profit was to be obtained.

Suave,
confident, able to cloak his callous nature with a thin veneer of culture, he
had already, in the two weeks of his stay, impressed Wayside with a sense of
his superiority.

His
remark, in effect a question, was addressed to young Welder, and appeared to
embarrass him. He had not visited Deadwood; in fact, he had but penetrated a
few miles into Dakota and knew little more about it than his hearers; all the
information he had so boastfully retailed respecting the diggings had been
obtained from others who claimed to have been there.

This
“slick stranger”—as he inwardly dubbed him —had guessed it.

“I
didn’t get so fur,” he said sulkily. “When I see how things was I hit the home
trail pretty lively; no use agoin’ on without tools an’ the rest of it.”

“Cripes,
you don’t want
no
tools to pull up grass roots,”
bantered a boy of about his own age. “I’m bettin’ you never see any gold-dust.”
Tim flushed again, hesitated, and then burst out angrily, “Didn’t, eh? What d’you
make o’ that?” Thrusting a hand into a pocket he flung something on a nearby
table. It proved to be a small doeskin sack which many of them knew to be a
miner’s “poke.” Snowy elbowed his way through the jostling crowd and snatched
up the bag, hefting it in his hand.

“Three
ounces, near enough,” he decided, and with a grin added, “O’ course, it might
be brass filin’s.” The ruse was successful. “Open it,” the owner said savagely.
“S’pose you do know gold when you see it?”

With
trembling fingers he untwisted the thong which closed the mouth of the “poke”
and, cupping one palm, tipped out a little of the contents. There it
lay
, a tiny mound of shining particles, glittering in the
sunshine which filtered through the grimy window of the saloon. A feverish
excitement burned in the old man’s eyes as he almost caressingly touched the
yellow heap.

“It’s
gold, shore as shootin’,” he murmured hoarsely.
“The on’y
thing that makes life worth livin’.”

“Waal,
it’ll certainly buy most anythin’,” drawled one of the bystanders.

Snowy
looked at him disgustedly. “Who the hell cares what it’ll buy?” he snorted. “It’s
just searchin’ for an’ findin’ it. Yes, gents, game-huntin’, woman-huntin’, an’
man-huntin’—I’ve tried ‘em all, but going after gold has ‘em skinned. You can
get tired o’ the others but once catch the gold-fever an’ it’ll never leave
you.” He poured the dust back into the bag and passed it to the owner. “I
reckon you ain’t tellin’ us where you got it,” he said dryly.

Welder
looked at him suspiciously. Did the hoary-headed old madman divine that he had
not even gone as far as the diggings and that his specimen ounces had been won
at poker? He decided it was not possible.

“Would
you?” he retorted. “All I’m sayin’ is that there’s plenty more where that came
from.” Snowy chuckled. “You think you know it all,” he said. “Wait till the
stuff has served you as many dirty tricks as it has me an’ you won’t be so
brash.” The chatter continued, incessant, still on the one topic. The sight of
that pinch of dust had fired the imagination of the younger men and stirred the
memories of the older. Stories of past gold booms were retailed and listened to
eagerly.

The
only member of the company who seemed to be unaffected by the excitement was a
young, black-haired cowboy, who, leaning lazily against the bar with one high
heel negligently hooked in the foot-rail, regarded the scene with amused
indifference. He too was a stranger to Wayside, having ridden in on a big black
horse, which he called “Nigger” and appeared to value highly, a week earlier;
so far, he had neglected to state his business.

He
had not been asked to do so. The tall, lean, but wide-shouldered supple frame,
firm jaw, deeply tanned face and level grey-blue eyes did not suggest that
liberties might be taken, especially when reinforced by a brace of
six-shooters, hung low, the holsters tied with rawhide strips to the leathern
chaps. He had given only a name—James Green, and in those days, that meant just
nothing at all. Wayside wondered, but in silence. The saloonkeeper spoke to
him.

“Gone
loco—the whole bilin’,” he said. “You’d guess they’d never seen a bit o’ gold
before, wouldn’t you?” A glint of a smile softened the hard lines of the cowboy’s
features. “They certainly seem some flustered—liable to stampede any moment,”
he returned, and then, “Why is it that easy money is so much more attractive
than coin yu earn?”

Must Love Breeches by Angela Quarles
Sassy Ever After: Bonnie Sass (Kindle Worlds Novella) by Erika Masten
Jacob Two-Two and the Dinosaur by Mordecai Richler
Gray Back Alpha Bear by T. S. Joyce
The Adventures of God in His Search for the Black Girl by Brigid Brophy
Monsieur Monde Vanishes by Georges Simenon
The Skeleton Haunts a House by Leigh Perry
The Hot Flash Club Strikes Again by Nancy Thayer
The House on Maple Street by Stephen King
The Boy from Earth by Richard Scrimger