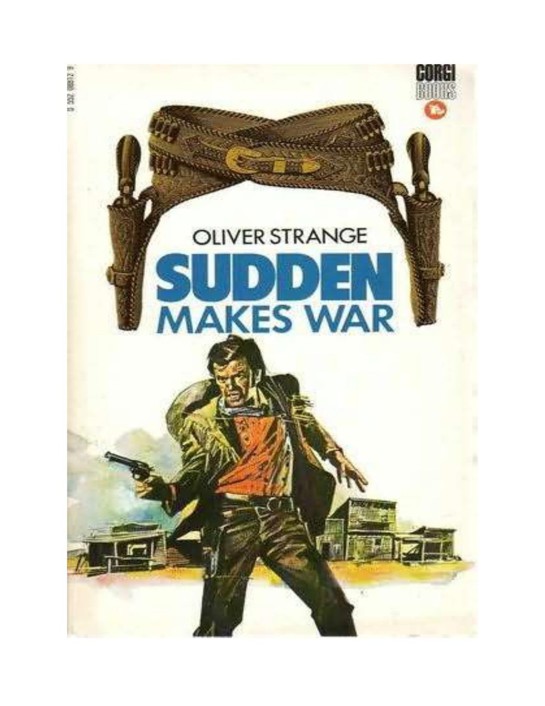 (Book 09 in the
Sudden Westerns series)

The
words—of sinister import in the West—arrested the attention of everyone within
hearing, and had the desired effect of collecting a crowd of the curious. Yet
the speaker had not the appearance of one engaged upon an errand of vengeance.
A youthful cowboy—he was no more than twenty —in town for a spree, seemed to
explain him.
So thought at least one of the onlookers.

“Young
Dan Dover o’ the Circle Dot ranch over to Rainbow,” he told an enquirer. “Now
what in ‘ell is he after? They ain’t got
no
money to
throw about.”

For
the object of their interest, standing on the raised platform before the
Paradise Saloon, his Stetson pushed jauntily back to disclose curly hair of a
particularly aggressive shade of red, had produced two gold pieces—double
eagles—and a Mexican silver dollar. With these he began to perform the
elementary conjuring trick of passing the coins from hand to hand, keeping one
in the air. It was not much of a show, and in an Eastern town would have
attracted little notice, but in this far-flung outpost of civilization, it held
his audience and brought others.

“The
man I’m in search of has gotta have nerve,” the young man announced, his
narrowed gaze sweeping over the spectators, “an’ be able to use his hardware.
The
fella
who can stand the test, pockets these two
twenties an’ gets the offer of a worthwhile job. Don’t all speak at once—I on’y
got one pair o’ ears.”

“Good
long ‘uns, though,” one of the crowd chuckled.

“An,
that’s terrible true, brother,” the youth replied, with whimsical gravity. “I
have to keep ‘em pared down to get my hat on.”

The
onlookers laughed and continued to enjoy the entertainment, unaware that while
the performer’s eyes appeared to be occupied solely with his trick, they were,
in fact, closely scanning the faces about him. Tradesmen, teamsters,
half-breeds, drummers, and loafers—he could place them all, and shook his head
slightly.

“I’m
outa luck—there ain’t an outfit in town.” he muttered.

For
Sandy Bend boasted a railway station, from which a single branch line travelled
East
, and was therefore a shipping point for cattle.
Only among the reckless sons of the saddle could he hope to find what he
sought. He let the coins drop into his right hand, closed, and opened it again.
One was missing.

“Now
where has that pesky Mex dollar got to?” he mused. With an exaggerated frown of
perplexity he displayed the palms of both hands; they were empty. “Blame it,
the twenties have gone too; must be floatin’ around.” His right fist clawed at
the air, and when the fingers unclosed again, there were the three coins. “Dead
easy,” he commented. “The on’y difficult part is gettin’ the gold to start
with.”

Applause
greeted the feat, and some of the audience began to drift. The conjurer grinned
knowingly.

“Shorely
there must be one o’ you who could use forty bucks.”

He
was talking at one man, whose presence the movement of others had uncovered.
Tall, broad-shouldered, with a lithe, athletic frame, black hair, cold
grey-blue eyes, and a lean, hard-jawed face, he was lounging against a
hitching-post on the outskirts of the crowd, watching the scene with satirical
amusement. No dandy cowboy this; the plain leather chaps, woollen shirt, and
high-crowned hat all bore signs of wear; even the silk kerchief knotted loosely
round his neck was of sombre hue, and the two guns, hanging low on his thighs
with the holsters tied down, were not fancy-butted. Red-head chinked the coins
in his hand, eyes on the stranger.

The
look made the words a direct challenge, and the man by the hitching-post seemed
to accept it as such. He stepped forward, moving with an indolent ease which
suggested the latent powers of a great cat.

The
young man suppressed a smile of triumph. “It’s right simple,” he replied.
Slipping his first finger and thumb round the silver coin, he held it at arm’s
length. “All you gotta do is let me shoot that out’n yore grasp at twelve
paces.”

The
black-haired cowboy’s face was expressionless. “Yu ain’t lackin’ in nerve yore
own self,” he said slowly.

The
crowd agreed. The slightest deviation would result in a smashed hand for the
holder of the target, and though there were many of them to whom forty dollars
meant temporary affluence, not one was prepared to take such a risk. The maker
of the offer knew what they were thinking, and confined himself to the man
before him.

“The
twenties is just a circumstance,” he mentioned. “Point is, will you gamble?”

The
grey-blue eyes studied those of the questioner with grave intentness, and then,
“I tote two guns; cripplin’ one paw won’t stop me usin’ the other.”

“Which
is where I gamble,” the conjurer grinned.

He
pointed to the blank wall of a stout log building across the street. Deftly
catching the coin the other flipped in his direction, he moved through the
crowd, which split into two lines.

Dover
followed, placed him in position, and then returned, counting off the paces.

“What’s
his game?” one of the bystanders queried. “He
don’t
seem the showin’ off kind.”

“You
can search me, but he’d better make the shot,” replied a neighbour. “That other
fella’s no kind to fool with. Look at him—just as unconcerned as a corpse.”

It
was true; resting comfortably against the building behind him, the man who was
to be shot at appeared to be the least interested of those present. Only when
he saw that the other had taken up his place and was waiting did he straighten
up and extend his left arm. Framed in finger and thumb, the disc of silver
twinkled in the sunlight; it presented a perilously small mark, but the
audience sensed that something more than mere cowboy conceit was behind the
exhibition.

“Gosh!
There ain’t
no margin for a mistake, ‘less he misses the hand
complete,” was one comment.

“He
won’t do that; these cowpunchers can all shoot.”

Silence
ensued as the marksman drew his six-shooter, flung the muzzle upwards, and
chopped down on the target. For a long moment he held it poised, squinting
through the sights, and then pulled the trigger. The report was followed by a
cheer from the breathless watchers as they saw the coin driven from the
holder’s fingers, hit a log, and drop in the sand. Amidst a hum of approbation,
the stranger thrust his left hand into the pocket of his chaps, picked up the silver
piece, and pitched it to Dover.

The
grin of triumph on the young cowboy’s face faded a little.

“Yu
mentioned a fella who can shoot,” the other reminded. “I’m aimin’ to ease yore
mind thataway.”

The
grin had gone now, but a snigger from someone nearby brought it back. The boy
was game.

The crowd, eager for more excitement, lined up again as the two men
took their places.

The
stranger, left hand still in his pocket, waited until he saw that Dover was
ready, and then….

No
one of the onlookers could have sworn to seeing the loosely-hanging right hand
move, but the gun was out, hip-high, and the spirt of flame followed instantly.
Again the coin was torn from its frame and hurled against the timber. The speed
of the draw, apparent lack of aim, and amazing accuracy had an almost
paralysing effect on those who saw it.

“Gawda’mighty!”
ejaculated one. “That’s shootin’, that is.”

Dover
himself was staggered, but he was also jubilant. He hurried to congratulate.
“Never seen anythin’ like it,” he said.
“Figured I could use
a six-gun, but hell!
I’m on’y a yearlin’. Say, my throat’s fair
crackin’; let’s irrigate.”

They
adjourned to the saloon and selected a table in a quiet corner. Their drinks
sampled, Dover fished out the Mexican dollar and examined it curiously; there
was a dent in the middle, and another on the edge. He pointed to the former.

The
other smiled, reached out his “makings” and began to fashion a cigarette. There
was a smear of blood on his left hand; the Circle Dot man’s eyes widened
.“
I’m guessin’ again,” he said. “I’m right sorry.”

“Shucks,
it’s on’y a graze. Mebbe I moved a mite,” was the careless reply. The tell-tale
stain was wiped away. “Well, s’pose we get acquainted. I’m James Green, of No
place,
Nowhere
, an’ powerful fond o’ new scenery.”

Book Club Killer by Mary Maxwell
The Medici Mistress: Nothing and no one would stop him from having her. by Connelly, Clare
Vengeance by Colin Harvey
The Silent Dragon: Children of The Dragon Nimbus #1 by Irene Radford
The Everything Naturally Sugar-Free Cookbook: Includes Apple Cinnamon Waffles, Chicken Lettuce Wraps, Tomato and Goat Cheese Pastries, Peanut Butter Truffles, ... Eclairs...and Hundreds More! (Everything®) by Annie Forsyth, Holly Forsyth
Dangerous Seduction: A Nemesis Unlimited Novel by Archer, Zoë
Whited Sepulchres by C B Hanley
Sunder by Tara Brown
Upside Down in the Middle of Nowhere by Julie T. Lamana
Dec's Downfall: (A Brothers of Devil's Comfort Book 5) (Brothers of Devil's Comfort MC) by Lake, Brair