Read On His Honor Online 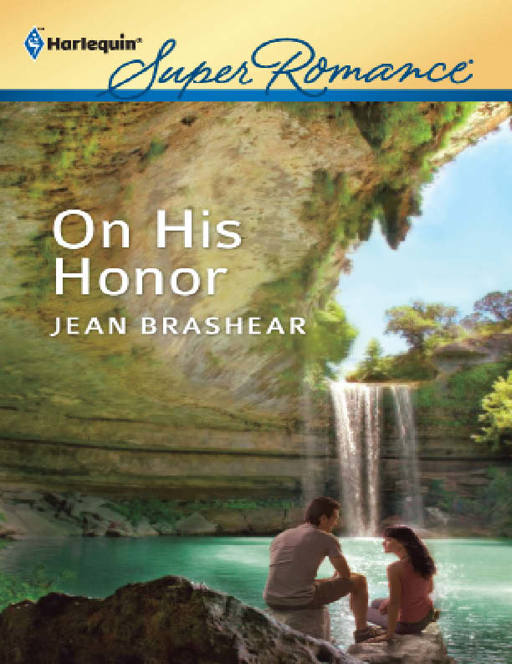 When boundaries get blurred

Detective JD Cameron is onto something big. He’s got evidence of a human-trafficking ring operating here in Austin, Texas. And he’s targeted one guy as his way into the ring. But how can JD get close enough without alerting the suspect?

The solution comes with actress Violet James. In town for personal reasons, she needs a bodyguard, and JD is perfect for the job. But this simple assignment quickly changes. An unexpected and powerful connection develops between Violet and JD—one that can’t be ignored. Not only is it jeopardizing his objectivity, he’s also aware he’s not telling her the truth. Confessing all risks his career, but
not
confessing risks so much more.

The guy quickly set Violet on her feet and steadied her. “Seriously, are you hurt?”

“Well, don’t I feel like a moron? Plowing right over a woman isn’t the usual ploy for making a good impression.” Then he grinned, and strikingly handsome became breathtaking. He stuck out a hand. “JD Cameron. How am I doing so far? Wowed yet?”

Charming, too. Her first instinct after everything she’d been through was to go icy, but that would be giving Barry’s betrayal too much power. Plus, Sophie said he was the next thing to family and she could trust him. She would try. “Let’s just say I won’t forget our meeting.” She slid her hand into his and smiled.

Oh, yes, clever and charming in addition to his good looks. She wondered what he’d think if he knew that what actually tempted her about him was the hint of shadows in his eyes. For all his good-natured banter, she sensed more depth to him than his manner revealed….

A number of you wrote me after
Most Wanted
to tell me how much you liked JD and thought he needed his own story. Well...okay, so it took a while, but...here he is! He was such a tease and a cutup (as well as a gorgeous hunk) in that book, and he was also very young. His reputation as both a fun guy and a lady-killer continues to this day, but JD’s been through the fire since you last saw him, and I enjoyed exploring both his sunny side and his shadows.

It was fun to revisit Hotel Serenity from
A Texas Chance,
too. Its location bears a resemblance to a very cool hotel in Austin, Hotel St. Cecelia, in the fun and funky SoCo district, but that’s where the resemblance ends...except in the draw the actual hotel holds for the hip crowd. The beautiful city of Austin itself is a character in this series, much changed in recent years but still retaining its unique flavor of college town and music lovers’ paradise, with a little gloss of high-tech heaven and big-city glamour lacquered over it.

Next up in The MacAllisters miniseries is the story of the youngest MacAllister, Jenna, out in June. I hope you’ll enjoy it.

From my heart to yours,

Three RITA® Award nominations, a
RT Book Reviews
Series Storyteller of the Year and numerous other
awards have all been huge thrills for Jean, but hearing from readers is a
special joy. She plays guitar, though, knows exactly how it feels to have
the man you love craft a beautiful piece of furniture with his own hands…and
has a special fondness for the scent of wood shavings.

Other titles by this author
available in ebook format.

And, as always,
for Ercel, my own hero and protector

Many thanks to Dr. Kalin Kelso and his wonderful staff at Austin Orthopedics,
Meggan Delvecchio, Amy Jackson,
Mandy Villanueva, Karen Kelso and
Brandon Williams—thanks a million for
working your magic on my shoulder woes so
I could finish this book in time!

Great appreciation to Nicole Cunningham,
Regina McCarley, Shawn Sabo and Linda Bullock of St. David’s Rehabilitation for getting me back in fighting trim after the surgery (and special thanks to Nicole for playing what-if with me regarding JD’s injuries and recovery).

Any errors made or liberties taken with all this valuable information are completely my own.

Then, in one slice of silence, “Violet, I love you!”

The crowd tittered at the heartfelt declaration. Violet paused on the red carpet and pivoted on her sky-high stilettos, smiling when she spotted the young man in the stands. She blew him a kiss, to which he responded with a shout and an ebullient fist pump. The crowd cheered loudly for America’s Sweetheart.

And East Tennessee’s favorite daughter loved them right back.

“We’re going to be late, darling, and we still have to face the dragon.” Her husband of four months, British actor Barry Marsden, placed his palm on the small of her back and guided her gently toward the waiting fashion reporter.

Violet turned up her palms toward the bleachers. “Gotta go. So sorry,” she called out, then blew another kiss to encompass all of them. The screaming rose to a fever pitch.

Then, with a sigh, she headed for the has-been actress who’d breathed life into a dying career by carving up other actors for fun and profit.

“Hello, Violet. Who are you wearing?” asked Sally Stern, her face permanently frozen by countless surgeries. Sally’s verbal knives were already sharpened and eager for her flesh, Violet had no doubt.

“A brilliant, exciting new designer, Adam Cutler.” Violet smiled brightly and executed a quick runway twirl to give the television cameras a complete scan. The figure-hugging silver garment with the modest front neckline skimmed her collarbone in a boatneck, the long fitted sleeves widened at the wrist to drape in an elegant trumpet nearly to her knees. The gown followed every curve of her body so faithfully she hadn’t eaten anything but low-cal protein shakes in a week, then it belled out below her knees to pool gracefully on the ground.

The dress was the picture of restrained grace—until she revolved, giving the camera a glimpse of her back, bared by a scoop nearly to the cleft of her derriere. Down her spine spilled a single line of pearls and silver rosettes, linked by a chain so delicate it was invisible to anyone not right next to her. The only other jewelry was a wide silver cuff bracelet studded with pearls and diamonds, and at her ears the diamond teardrops Barry had given her for a wedding gift. Her jet-black hair was styled after the legendary glamour girls like Jane Russell and Veronica Lake—a smooth fall turned under at the ends and dipping over one of her famous turquoise eyes. Her lipstick was killer red.

Violet’s curves might be more modest than Jane Russell’s bombshell proportions, but she knew she was pulling off quite a look with the striking contrast of milky skin, silver gown and raven hair. Sometimes being a girl was too much fun.

“Stunning, darling, simply stunning.” Violet’s eyes widened in wonder as Sally touched her with surprising gentleness on her arm. “You’re going to win tonight, I’m certain, and you’ll deserve it for your courage.”

The diva reporter dished out praise so sparingly, Violet had to work hard not to faint.

Or throw her arms around the woman, as her basic nature urged her to do. Even after twelve years as an actress, five at the top of the box office, she couldn’t completely stamp Southern warmth out of her, nor did she have any desire to. It was hard enough to remain human—or sane—in the artificial Hollywood environment in which she lived.

So she gave in and hugged Sally, smiling as the dragon’s cheeks turned rosy. “Thank you, Sally. That means a lot.”

One genuine squeeze of the hand from the older woman, then Violet all but danced away. What a night this was!

And the icing on the cake was her handsome spouse by her side, escorting her with his usual panache. She was grateful for the evening together, even if too much of it would be spent in public and on alert. Juggling two busy careers meant they didn’t have nearly enough time alone with each other.

But that was part of the package, so Violet smiled and smiled. Stopped to sign autographs all the way into the auditorium, once even forcing the security guys to allow a preteen girl to come down from the stands to present her with a teddy bear she’d made just for Violet.

Because she adored her equally talented husband who, by all rights, should be up for an award, too, she took less time with her fans than she normally would, waving goodbye and heading inside.

Now to endure the hours until she would learn if the role she had defied her wholesome image to play would, at long last, garner her the respect of her peers.

Just as they reached the doors, Barry dipped her into a romantic kiss that sent cameras flashing and would have her fans sighing over the fairy tale that was her life.

It reminded her that this was what was truly important, the love they shared, the life they would build. Whether or not she won mattered much less. She had everything she’d always wanted.

Her first marriage to the director who’d made her a star had ended after four years, and she’d grieved over the loss of a dream. No one in her family had ever been divorced, and beneath the star patina beat a very ordinary heart, one that only wanted to love and be loved. Trouble was, she loved her work, too, and she was good at it. When her marriage had ended, she’d decided that perhaps love wasn’t her lot, and she’d told herself to be grateful for all she had.

Though she’d thought she’d never marry again, three years later, Barry had charged into her life and swept her off her feet. She hadn’t believed the on-set love affair cliché could ever happen to her, but Barry and she were no cliché. He loved her to distraction, and she loved him.

She had been given a second chance, and this time she would get it right. She and Barry would be Joanne Woodward and Paul Newman, with a dash of Ward and June Cleaver thrown in. They’d grow old together gracefully and, with luck, die in each other’s arms.

So what if she was a hopelessly middle-class small-town girl, as her best friend Avery had teased? She didn’t care. Her parents were still in love after thirty-six years, and Violet’s two brothers had growing broods themselves.

She laid one hand over her flat belly as Barry ushered her inside. Before too much longer, she hoped she and Barry would begin a brood of their own.

Life was so good it was almost scary. She pressed her lips together and sent up a silent plea.

“What is it?” Barry asked her.

She shook her head. “Just…I love you so much. I’m so happy.”

He smiled and led her inside.

On Her Knees by Jenika Snow
Reign In Life: 90 Powerful Inspirations For Extraordinary Breakthroughs by Joseph Prince
Dare To Love Series: Dreaming Up a Dare (Kindle Worlds Novella) by Catherine Gayle
A Night at the Operation by COHEN, JEFFREY
Bitter Almonds by Laurence Cosse, Alison Anderson
Various Flavors of Coffee by Anthony Capella
Noah Barleywater Runs Away by John Boyne
Anew: Book Three: Entwined by Litton, Josie
Yo soy Dios by Giorgio Faletti
Clockworks and Corsets by Regina Riley