Read On to Richmond Online 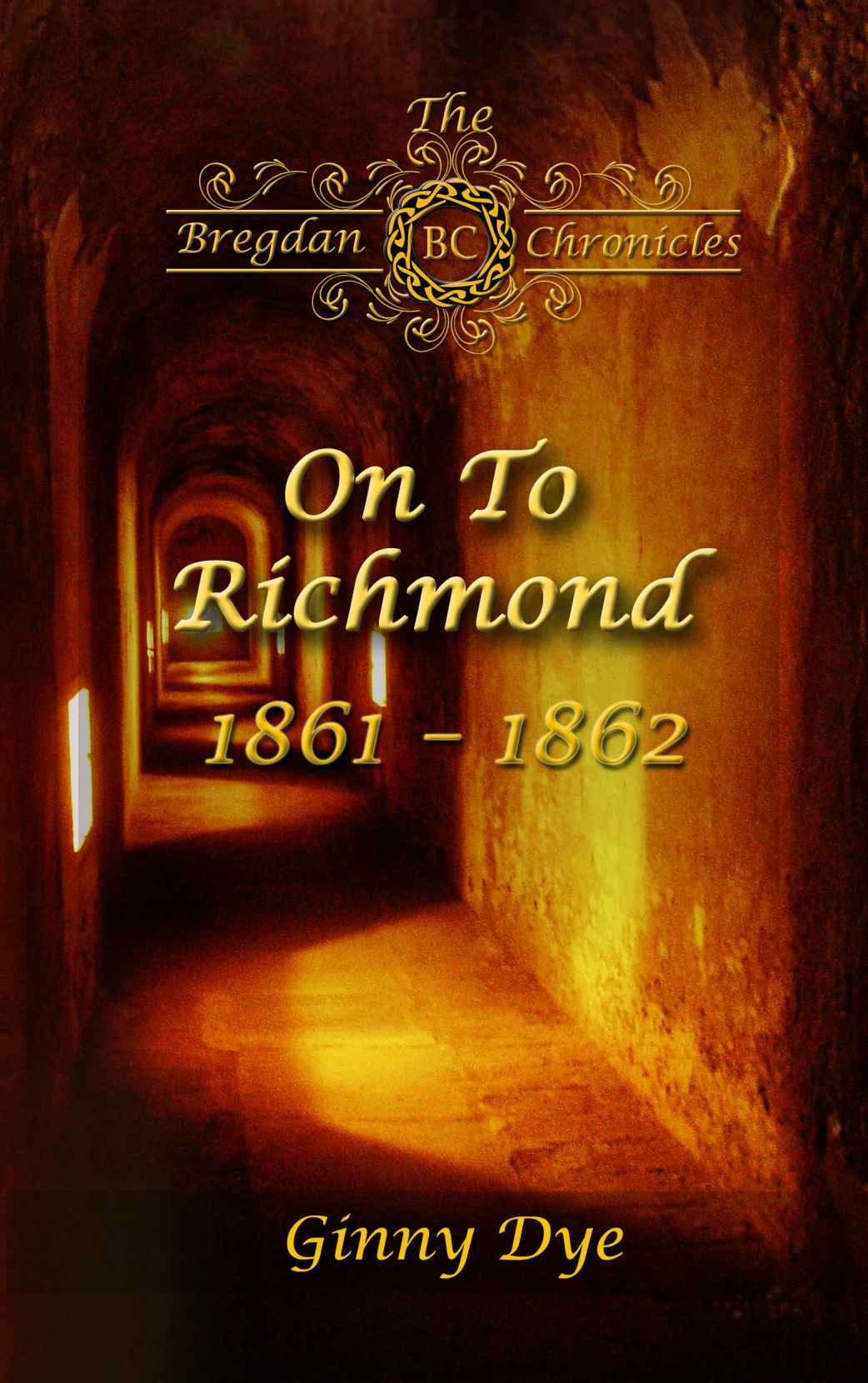 Book # 2 in The Bregdan Chronicles

Sequel to Storm Clouds Rolling In

A Voice i
n the World Publishing
Bellingham, WA
www.AVoiceInTheWorld.com

[Type a quote from the document or the summary of an interesting point. You can position the text b
ox anywhere in th
e
On to Richmond

2010 by Ginny Dye
Published by Together We Can Change the World Publishing
Bellingham, WA  98229

All rights reserved.  No portion of this book may be reproduced in any form without the written permission of the Publisher.

For Scarrie, my incredible little sister who had the courage to

fight for her freedom, and who is now using that same

courage and spirit to pursue her dreams.

I’m proud of you and I love you!

A Note
from the Author

There are times in the writing of history when we must use words we personally abhor.  The use of the word “nigger” in
Storm Clouds Rolling In
is one of those times.  Though I hate the word, its use is necessary to reveal and to challenge the prejudices of the time in order to bring change and healing.  Stay with me until the end – I think you will agree.

My great hope is that
Storm Clouds Rolling In
will both entertain and challenge you.  I hope you will learn as much as I did during the months of research it took to write this book.  Though I now live in the Pacific Northwest, I grew up in the South and lived for 11 years in Richmond, VA.  I spent countless hours exploring the plantations that still line the banks of the James River and became fascinated by the history.

This truth is why I named this series The Bregdan Chronicles.  Bregdan is a Gaelic term for weaving.  Braiding.  Every life that has been lived until today is a part of the woven braid of life.  It takes every person’s story to create history.  Your life will help determine the course of history.  You may think you don’t have much of an impact.  You do.  Every action you take will reflect in someone else’s life.  Someone else’s decisions.  Someone else’s future.  Both good and bad.  That is the
Bregdan Principle
…

Every life that has been lived until today is a part of the woven braid of life.  It takes every person’s story to create history.  Your life will help determine the course of history.  You may think you don’t have much of an impact.  You do.  Every action you take will reflect in someone else’s life.  Someone else’s decisions.  Someone else’s future.  Both good and bad.

My great hope as you read this book, and all that will follow, is that you will acknowledge the power you have, every day, to change the world around you by your decisions and actions.  Then I will know the research & writing were all worthwhile.

Oh, and I hope you enjoy every moment of it, and learn to love the characters as much as I do!

I’m already being asked how many books will be in this series.  I guess that depends on how long I live!  My intention is to release two books a year, each covering one year of history – continuing to weave the lives of my characters into the times they lived.  I hate to end a good book as much as anyone – always feeling so sad that I have to leave the characters.  You shouldn’t have to be sad for a long time!

Four
books are already written and will all be released in the spring 2010.  If you like what you read, you’ll want to make sure you’re on our mailing list at
www.BregdanChronicles.com
.  I’ll let you know each time a new one comes out!

Carrie Cromwell frowned as she stared out over the raging, turbulent waters of the James River.   Four days of steady rain had transformed the usually placid river into a furious monster tearing at its confining banks.  Torrents of water sweeping down from the western Appalachian Mountains would soon enable the river to succeed in its quest to top the banks and seek its claim on the surrounding farmland.   Massive tree trunks swept by like weightless match sticks, their solid darkness almost matching the muddy swirl of the water.

Carrie lifted her eyes from the river to gaze up into the brilliant blue sky.  The rain had ended just the night before, leaving the air crystal clear and deliciously fresh.   She allowed herself to stare up into it for just a moment before she turned her eyes back to the river.  It more closely matched her thoughts.

“Are you going to tell me about the letter you got from your father?  Or are you just going to continue stewing about it?”

Carrie managed a slight smile as she turned to look at Rose.  “How did you know?”  Then she laughed.  “Don’t even bother to answer that question.  I should know by now that you know me almost as well as I know myself.”

Carrie lapsed into brooding silence again, knowing Rose would give her all the time she needed to answer her question.   Granite, her towering grey Thoroughbred gelding, moved under her restlessly as the waters of the river won their fight with the muddy banks and began to edge slowly toward where the two friends watched from astride their horses.   Finally, she reached deep into the pocket of the navy blue dress she wore and pulled out a thick envelope.

“This letter from Father came just this morning.”

Rose nodded.  “I saw the man who delivered it.”  She paused and then asked carefully, “Is it bad news?”

Carrie managed a slight laugh.  “Is there anything
but
bad news in our country right now?  Fort Sumter has fallen.  Virginia has seceded.   The war has begun...”  She shook her head.  It would not do to let her thoughts go where they wanted to.  She knew the thoughts would come - later - when it was dark and there was no flurry of activity to block them out.  But for now she would concentrate on what was at hand.  She raised her hand and stuffed an errant, wavy black strand of hair back into her long braid.  In a hurry to get to the river, she hadn’t even bothered to shape it into a bun.   Now the silky strands sought to escape the confines of the thick braid as the breeze teased her hair into rebellion.

A frown creased her brow again as she stared down at the letter in her hand.   “Father has been asked by Governor Letcher to take a high position in the Virginia state government.”

“Surely you expected that.   Your father has been working with the governor since he left in November.”

Carrie frowned again as memories of her father’s hopelessness after the death of his beloved wife, Abigail, swept through her mind.  She missed her mother, too, but they had grown close only in the last month of her life, so her death hadn’t left the same gaping hole.  She nodded as Rose’s words penetrated her thoughts.  “Yes, of course I expected it...”

“Then what is troubling you so much?”  Rose demanded.

Carrie almost smiled at the impatience in her friend’s voice.   The freedom they experienced in their friendship was wonderful.   A year ago things had been very different.  Rose had still been her best friend, but the reality of Rose being her personal slave, while Carrie lived the luxurious life of a wealthy plantation owner’s daughter, had put an impenetrable barrier of protocol between them.  The past year had blown those barriers away.  Now they were like sisters.

Carrie struggled to express her feelings.  “Everything is so different now...,” she began haltingly.   “It was exciting to think of Father standing close to the helm of Virginia when we were still part of the Union and everyone was fighting so hard to keep it that way.   But now….”  She paused and stared out at the rampaging river as she tried to force her turbulent thoughts into some form of order.  “Father believed so much in keeping the Union together.  Now he has flung himself into the struggle for Southern independence.   I guess that’s what is hard.   He is fighting just as hard to defend what he didn’t believe in, as he fought to keep it from happening.”  She shook her head slowly.  “I still can’t believe it’s true.  Virginia is no longer a part of the United States.  I am no longer a United States citizen.”

“What else did your father say, Carrie?”  Rose’s voice was now gentle as if she sensed the deep turmoil boiling in her friend.

Carrie shook her head more firmly.  “I’m sorry.”  Her short laugh held no humor.  “I realize I’m not being very communicative today.  Let me try this again.”  She gazed down at the letter she held in her hand and searched for the right place.   “Here it is...”   She straightened in the saddle to read her father’s words and braced herself to accept the truth of what she read.

I have grand news for you.  Our fair capital of Richmond is being chosen for a high honor.  The decision is being made, even as I write this letter, to place the seat of our wonderful Confederacy right here in Richmond.

Rose looked at Carrie in surprise.  “I thought the Confederate capital was in Montgomery, Alabama.”

Carrie shrugged.  “It was.”  She put down the letter and tried to explain what her father had written without having to decipher his handwriting again.   “It seems Alexander Stephens, the vice-president of the Confederacy, arrived in Richmond just a few days after the convention voted to secede.    He was impressed by Richmond’s beauty, but it was much more than that that caused him to make his recommendation for Richmond to become the capital.  He is well aware of Richmond’s economic wealth and the potential for growth.”

Carrie paused as she tried to remember what else her father had said.   “Tredegar Iron Works played a big role in his decision.  That, along with the other iron companies in Richmond.  Stephens said the Confederate government’s war-waging capacity would have suffered a staggering blow if Virginia hadn’t seceded.   They’re counting on Richmond for cannons, ammunitions, boats and other things.”   She looked out over the river again as she tried to erase the image of Southern cannons pointed toward her friends from the North.  “My father said something about Richmond being strategic in a military sense, but I’m not sure what he meant.   He may write more about it later.”