Read One Week To Live Online

One Week To Live 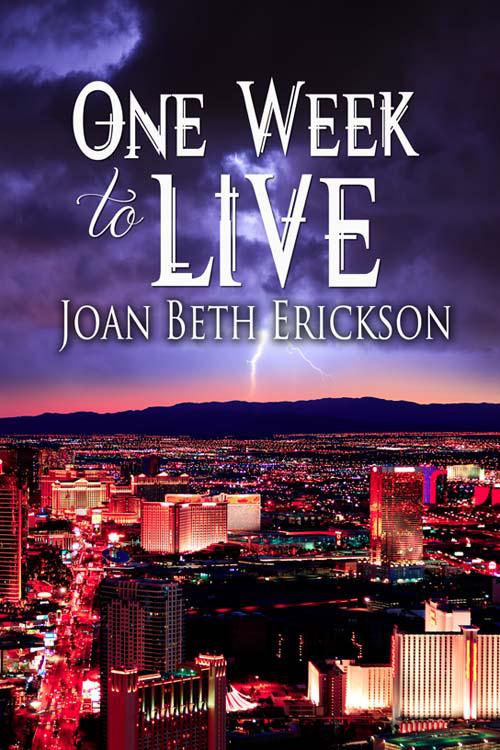 One Week to Live

One Week to Live

To my dearest husband, Gary,

who encourages my dreams and believes in me.

Thanks for always being there.

A special thanks goes to my two critique partners, Barbara and JoAnn, for all of their help and guidance.

A child’s piercing scream woke Angela Martin. Scrambling to a sitting position in her apartment bedroom, she listened. A siren’s distant wail punctuated the Las Vegas night. A door slammed shut down the hall, but she heard no more cries.

She sank onto her sweat-dampened pillow and sucked in several shaky breaths. The dreaded, sleep-robbing nightmares had surfaced several nights before growing more intense with each episode. First she’d seen the ominous shadow of a faceless man. Next she’d dreamed of an empty pink stroller and a carelessly tossed doll. Now she’d heard a child’s plea for help. She feared the unconnected fuzzy snapshots held premonitions of something to come.

The last time she’d been plagued by similar dreams, a youngster had died. Would another one soon meet the same fate?

The day dawned perfect for carrying out his plan. The sun burned through San Diego’s coastal cloudiness leaving the sky a pale baby blue. Gulls soared overhead, and the salty scent of the nearby sea tinged the light breeze.

He glanced over at the playground. Toddlers and their caregivers started to arrive. Sunny mornings always brought them out, proud mothers and dutiful nannies with excited children in tow.

Sitting on a stone bench beneath a eucalyptus tree’s leafy shade, he’d studied their arrivals for the past month. Only one interested him, however. He hid this interest behind dark glasses and a daily newspaper. He’d always prided himself on going undetected while homing in on his prey.

Studying his wristwatch, he frowned. They were late. He’d observed mother and daughter arriving promptly at eight every Saturday morning for the past month. The blonde toddler always ran toward the bright yellow and blue swings while the mother watched her from a neighboring bench. Soon an elderly woman, pulling a wire cart filled with grocery bags, joined them. They’d leave the park together. Last Friday, he’d followed them to make sure his plan worked. He smiled. It definitely would. The unsuspecting young mother was about to play right into his hands.

If they didn’t arrive within the next thirty minutes, the old lady might not wait for them. If she didn’t, his plan could fail. Failure wasn’t an option. His impatience grew. Others arrived at the park, and the air filled with the happy giggles of kids at play. A sound he now hated.

Spotting the mother pushing the bright pink stroller, he relaxed. As she passed he briefly studied her, but she didn’t glance in his direction. When the toddler laughed and pointed toward the swings, the woman’s face filled with joy.

His game would begin when he snatched his coveted little prize and destroyed the picture of this happy little family forever. The taste of revenge sweetened the last dregs of his bitter coffee. Taking the little girl in daylight was risky, but he’d always thrived on risk taking.

To newspaper journalist Brian Murphy, the scene shouted déjà vu. A quiet residential neighborhood transformed into chaos by the wail of sirens and the screech of tires as police patrol cars arrived with their red lights flashing. Without even hearing the news on the police scanner, the empty pink stroller and discarded doll told the story.

He studied the uniformed patrolmen cordoning off the area with yellow crime scene tape. Not long after, the television news crews arrived, swooping down the street in a parade of vans. Cameramen and reporters trampled the lawn to set up and be the first to obtain a sound bite, the first to get the story out for the next news broadcast. Reporters with microphones quickly announced the cruel facts.

“Breaking news, another San Diego child has been abducted.”

He knew he should be impartial, write the facts as he saw them, nothing more. But when it came to child kidnappings, he couldn’t maintain impartiality. Remembering the last child snatched and murdered, he shuddered. During his career, he’d seen his share of gruesome things. However, nothing prepared him for the photo of the San Diego cop’s mutilated son.

No one witnessed that abduction, and he doubted they’d find any witnesses this time either. He suspected people in this quiet neighborhood of tree-lined streets, low-rise apartment buildings, and older one- and two-story houses were too busy with their daily lives to notice things beyond their front doors.

A police detective and distraught woman emerged from the house’s second-floor apartment. The television crews and reporters crowded in on them. Cameras rolled as reporters shouted out questions.

The detective held up his hand, asking for silence, and issued a brief statement.

Brian preferred remaining near the back of the throng to better observe the activities. He automatically removed his notebook and pen from his shirt pocket and jotted down the details of the report.

According to the detective, the man the cops nicknamed the “nursery rhyme kidnapper” in the last case had struck again. A knot formed in the pit of his stomach.

He studied the distressed mother as she held up a photo of a blonde-haired little girl. Choking on tears, she pleaded for her daughter’s safe return, and he felt her pain.

She looked familiar, but it took him a minute to realize why. He’d interviewed Susan Chapman recently for a piece he’d done about young single mothers struggling to get their college degrees while working and taking care of their children. Studying the distraught woman now, he shook his head. Life definitely wasn’t fair.

In the last abduction case, the nursery rhyme kidnapper appeared to enjoy playing games with the police. The bastard took pleasure in challenging the authorities to catch him before he killed his victim. He hadn’t demanded a ransom, nor molested the child before killing him. The sicko thrived on the hunt, the chase, and the final kill.

He thought about Angie Martin and her involvement in the previous case. He’d been the reporter on the story and she’d been the psychic trying to help San Diego cop Ray Ramirez find Tucker’s son. He’d never forget the one kiss they’d shared. He hadn’t been able to get her out of his mind since.

Unfortunately, her premonitions weren’t enough to save the boy. She’d been devastated when they found him murdered. She’d vowed to never work on another police case. Soon after that she’d left San Diego and moved to Las Vegas. He’d gotten her new phone number but hadn’t called her. He suspected she was still pissed at him for the story he’d written about her, but she needed to know about the latest kidnapping.

Walking to his car, he pulled out his cell phone. As the phone rang, he considered what he’d say to keep her from hanging up. At the time he’d presumed she’d be happy with his story featuring her and her psychic abilities. He didn’t think to ask her permission. Therefore, he’d been surprised when she accused him of using her for his own career gains. It hadn’t helped that after Tucker’s son died the tabloids picked up his story and did a not-so-flattering portrait of her as a charlatan.

When the phone rang, it felt like minutes since Angie had fallen back asleep. However, the blazing red numbers on her bedside clock said 11:30 A.M. She’d slept right through her alarm, wasting nearly half of her Saturday off.

“Yeah,” she grumbled into the portable phone.

“Oh, it’s you,” she mumbled. Recognizing his voice, she forced herself to sound cool even though her heart skipped a foolish beat.

“Such an enthusiastic greeting for an old friend.”

“The Pope wouldn’t receive an enthusiastic welcome right now,” she muttered, struggling into a sitting position. “And who says you’re a friend?”

“Well at least you put me in the same league as the Pope. And you haven’t slammed the receiver in my ear yet.”

“Don’t flatter yourself. Give me one good reason not to hang up.” She scooted to the edge of the bed and let her bare feet dangle down.

“You can’t still be mad at me about the article.”

She’d expected an apology when he’d written it, but since she was all-too-familiar with his Irish stubbornness, she knew he never would apologize. However, that didn’t keep her from hoping.

“Yeah, you were doing your job,” she replied. “Well, do that job somewhere else. Stay away from me.” Fanning herself with the notepad she’d picked up from the nightstand, she considered cranking up the air conditioner. Remembering her last electric bill, she decided against it.

“How’d you get my phone number?”

“Sally Ramirez told me you’d moved to Vegas and gave it to me.”

“That little snitch.” She needed to talk to her matchmaking, former neighbor. Always the romantic, Sally thought Brian and Angie would make a great couple. However, he was much too charming and handsome to be trusted.

“How’s Dan Tucker doing?” she asked, changing the subject. “Has Sally or Ray heard from him? He practically lived at their apartment after his divorce.”

“Last I heard he’s gone back to undercover cop work. No one hears much from him anymore.”

The guilt of Tucker’s son’s death crowded in, suffocating her.

“Why did you move to Vegas?” he asked.

“Where I live, like everything else in my life, is none of your damn business.” Carrying the portable phone, she marched into the living room and cranked the air conditioner to high. To hell with the cost. She sank down on her well-worn living room couch.

She wasn’t fond of the desert or the summer heat, but she’d always retreated to Vegas when things got rough. She’d first come here, pregnant and unwed at sixteen, to stay with an elderly aunt. She’d again returned to Las Vegas at age thirty-three to escape an angry, estranged husband.

The divorce was finalized three years ago, but she continued to look over her shoulder, particularly after Brian’s article came out. Because of the unwanted publicity, she’d decided to leave San Diego and return to Vegas.

Alive by Holli Spaulding
The Sisterhood of the Traveling Pants by Ann Brashares
Oathbreaker: The Knight's Tale by Colin McComb
Hotel Moscow by Talia Carner
Shanty Irish by Jim Tully
Forgotten Life by Brian Aldiss
Too Close to Home by Georgia Blain
No Angel by Vivi Andrews
The Seal King Murders by Alanna Knight
I'm Not the Biggest Bitch in This Relationship by Wade Rouse