Read One Year After: A Novel Online

One Year After: A Novel 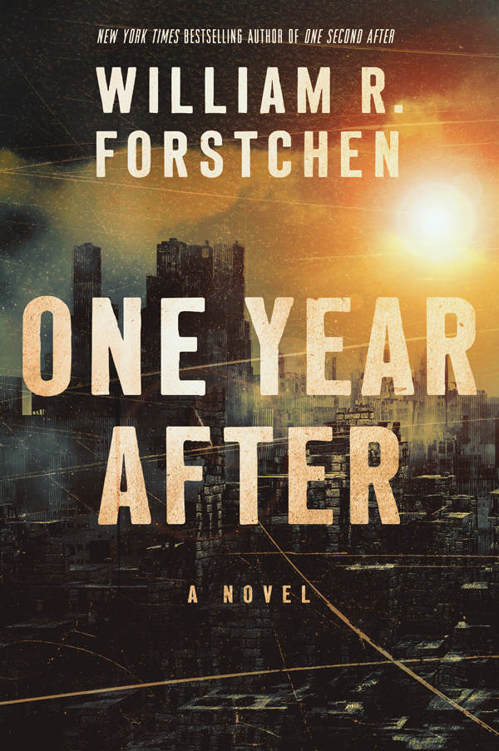 For Congressman Roscoe Bartlett and Dr. Richard Pry, who first sounded the warning about EMP. And for the real “Franklin Clan,” who have become a true blessing in my life.

When
One Second After
was released early in 2009, I never anticipated all that would follow. I had actually started thinking about a book regarding the threat of an EMP attack back in 2004, after a congressional committee, chaired by Congressman Roscoe Bartlett, released a report on EMP that should have served as a wake-up call to the nation; a report that the media, and therefore the general public, ignored. In a conversation with that remarkable, brilliant gentleman, he lamented that the core problem was that the issue of a catastrophic “first-strike attack,” using an EMP against the continental United States by a nation such as Iran, North Korea, or a terrorist group backed by them, sounded like science fiction, and therefore it lacked a public constituency to demand a more robust foreign policy and defensive preparedness. Bartlett and others asked if I could write a “fact-based” novel about the threat to try to raise public awareness.

It took a year for the idea to even begin to jell. For the longest time my thinking ran along the classic (no offense intended) “Clancy-esque” model of a hero racing to stop the disaster. And then it was the students at my college and my daughter who created the inspiration. I am blessed to teach at Montreat College (yes, it is a real school) where, with a student body of five hundred, a professor forms close bonds with his students across four years. Graduation day, therefore, is a special moment, filled with both pride and poignancy as one sees “their kids” moving on. It was yet another graduation day, yet another speaker droning on … I was looking at “my kids,” politely listening to the speaker, but obviously eager to get on with things, and then it struck me—what would happen to them if, at this moment, America was hit with an EMP strike? What would happen to my college, my beloved small town of Black Mountain, to my daughter, to all of us? Two hours later I was at the keyboard and began to write the story that became
One Second After
.

It wasn’t until 2009 that the book was published. (Rather amusing that a number of major houses rejected it, to the delight of my publisher and editor who did pick it up, and see it turned into a
New York Times
bestseller.) At the time of its release, I had no idea what was about to happen. I was actually attending a conference about EMP out in Albuquerque with my good friend Captain Bill Sanders, who wrote the technical afterword for the book, when my agent called with the news that we had hit the best-seller list. I was flabbergasted, and there is no other word for it.

The full impact really didn’t hit until several months later. I wasn’t even aware, at the time I was writing the book, that there was an emerging movement of people who called themselves “preppers.” A couple in a nearby community had started a business, “Carolina Readiness Supply,” and asked if I’d come speak at a conference they were organizing. “How many do you expect to be there?” I asked and they replied around a hundred or so. On the day I arrived, that wonderful couple was standing in a jammed parking lot to greet me, and I found myself facing an audience of more than five hundred, some coming from as far as Atlanta and Charlotte. Something was definitely happening!

And thus it has been in the years afterward. Some say that I was a driving force in the creation of the prepper movement, but I beg to differ. Maybe my book helped to serve, but the movement was already “a-forming.” Tens of millions of Americans were again thinking as Americans, that planning for self-reliance
before
a disaster hits is a smart move. For those new to the concept of “prepping,” I do have to forcefully say, ignore how mainstream media too often portray such people in absurd television programs. Nearly without exception I have found preppers to be decent, honest folks who think not only of themselves but also of their neighbors, community, and nation as well. If “the stuff” ever does “hit the fan,” pray that your neighbors are preppers. And a major thank-you here for the thousands of preppers I have met. All I can say is thank you for your friendship.

As this book goes to print, it has been more than six years since
One Second After
was released. Much has changed but, frustratingly, much is still the same. I had hoped that by now there would have been government action at the national level to better secure our power grid, create plans both for defense and for public preparedness, and a more robust foreign policy that makes clear that the acquisition by rogue nations of a weapon that could generate an EMP will NEVER be tolerated. None of this has happened. The historian in me recalls the 1930s. We watched passively as the threats grew, which exploded into our nation’s life on December 7, 1941. We are asleep again, while North Korea tests nuclear weapons and ballistic missiles, Iran is not far behind, and ISIS, a movement as brutal and psychotic as Nazism, emerges.

It had never been my intention to write a sequel to
One Second After,
but wherever I spoke that was always a question: What happens next? I resisted for five years; my publisher, Tom Doherty, and his senior editor Bob Gleason dropping major “hints” that they wanted more. During those years I did give them a book which I truly enjoyed writing, offering a positive vision of our future in space, and also a couple of books about the Civil War and the American Revolution with my good friend Newt Gingrich, and then a self-published book about the threat of ISIS. Finally, I could no longer say no and decided to pick up the narrative thread of what happens to John Matherson, his family, his village, and his college. Thus this book, and a third one to follow several months after this publication to round out the story.

This is supposed to be a preface and an acknowledgments page, and it is time I get into that. I feel like someone at an award’s ceremony who is admonished to keep it to a minute or less, but has a list ten minutes long! So here goes:

Special thanks to Newt Gingrich, Roscoe Bartlett, and others who have, for decades, worked the political front of this issue. In an age of such bitter partisan infighting, how I wish both sides of the aisle, both houses of Congress, and the executive would realize that this is a national threat that if not addressed, will indeed result in a government in exile in some underground bunker far outside the ruins of D.C., struggling and perhaps fumbling to put the pieces back together again, like Humpty Dumpty’s horsemen and soldiers.

As always, my special thanks to Tom Doherty, Bob Gleason, and the wonderful team at Tor/Forge. As a fledgling writer thirty years ago, when I first met Tom Doherty, I hoped that someday I could actually be part of “his team.” We’ve done half a dozen books together, and there is no one else in this business I hold in higher regard. On the business side as well, eternal gratitude to my agent, Eleanor Wood; my film agent, Josh Morris; the ASCOT media publicity team and my near daily contact there with Monica Foster. A book is a team effort.

When I first showed a draft of the book to my college president, Dan Struble, he asked why I just didn’t name things for real rather than give fictional names for my town and college. Thank you, Dan, for that suggestion. It gives a “real place” to the books that otherwise would be lacking. I am blessed to be living in Black Mountain, North Carolina, (yes, a real place!) and Montreat College. The permission to use the real names helped me with the writing and apparently has helped many a reader to have personal association with the story as well. Most of the names in the books are fictional, but some are real, and those “real” characters are drawn on how I see them as my friends. I hope they take delight rather than offense.

And finally, a very personal acknowledgment: A couple of years ago, I was speaking at a prepper conference and afterward signing books. Robin Shoemaker stepped up to the table, there was eye contact … and well … that once in a lifetime moment hit. I think the line in
The Godfather
is that we were hit by the “Sicilian Lightning Bolt.” The best reward of my life for writing a book.

It’s time to close this acknowledgments and get on with the tale. If you are like me, I tend to skip the acknowledgments stuff. It is usually a lot of names I don’t recognize and definitely not the reason I purchased the book in the first place! But since my publisher is paying for the ink and paper, at least for old-fashioned printing rather than electronic, I do feel compelled to close with one final thought. The books are fiction, but the scenario could be real. It might very well be real. Our parents and grandparents of the “Greatest Generation” allowed their leaders to close their eyes to the growing threats around the world saying “it will never touch us here,” and a terrible price was paid. History has a hundred such examples. Do we read this as a novel or as a warning? If it is a warning, do we act or fall back upon “someone else will make sure this doesn’t happen?” I pray that thirty years hence, these books are forgotten as dark tales of warning that never came true. If so, I will be happy and content for my daughter and grandchildren. I pray that I never one day hear, “Bill, you were right.”

That, my friends, is undoubtedly up to you. The issue is in our hands to, as Abraham Lincoln once said, “nobly save, or meanly lose, the last best hope on earth.”

This day marks the second anniversary of the start of the war that saw the detonation of three EMP weapons over the continental United States, another off the coast of Japan, and a fifth weapon believed to have veered off course and detonated over Eastern Europe. The effects of this attack—never fully confirmed but believed to have been an act between Iranian-supported terrorists and North Korea—continue to reverberate around the world. It is estimated that upwards of 80 percent of all Americans, and more than half the population of Japan, Eastern Europe, and what had been western Russia and the Ukraine have died as a result. China has been seen as the new superpower in the wake of the attack, with significant Chinese forces, defined as humanitarian, now occupying the West Coast of the United States and Japan. Western Europe and our own United Kingdom, though spared the direct results of the attack, are still feeling the profound economic impact as the world attempts to reestablish economic and political balance. In south Asia, intense fighting continues in the wake of a limited nuclear exchange between Pakistan and India.