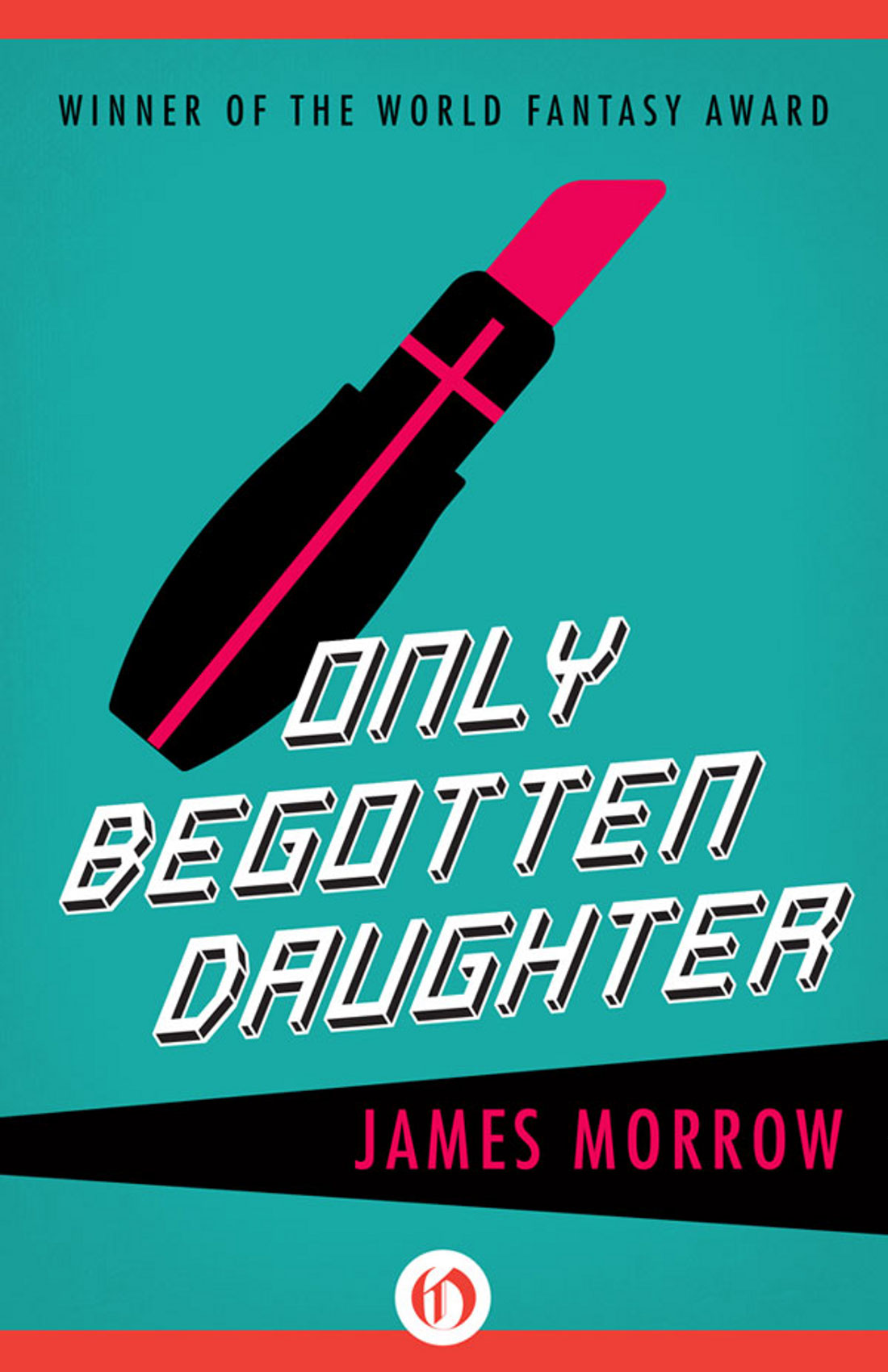 PRAISE FOR THE WRITING OF JAMES MORROW

“James Morrow [is] a literary swashbuckler, his proud vessel a stalwart craft composed of rationalist thought . . . his weapons a rapier intelligence and a Swiftian gift for satire.” —
The Washington Post Book World

“Morrow’s satire is funny and sad, and increases our ability to see the little bits of truth in our own world.” —
The Denver Post

“Move over Kurt Vonnegut. James Morrow has put on the mantle of America’s best satirist.” —James Gunn, the University of Kansas

“Morrow understands theology like a theologian and psychology like a psychologist, but he writes like an angel.” —Richard Elliott Friedman, author of
The Hidden Book in the Bible

“As near as I can tell, Morrow is the greatest kind of American author. He’s funny and profane, bighearted and brave, he never takes the same risk twice in his satire, and for some reason I can’t explain, I’ve waited almost 20 years to express my love for his work.” —
The Stranger

The Wine of Violence

“[The] best SF novel published in English in the last ten years. It has the scope of
Childhood’s End
, the verbal playfulness of
Cat’s Cradle
, and the ethical seriousness and comic rage of
Rasselas
.” —
American Book Review

“The story zips along with vivid images, and the message is clear: A heady brew, the wine of violence packs a hangover.” —
Los Angeles Times

“[A] twelve-course literary banquet spiced with intriguing characterizations and inventive plotting . . . Morrow draws his plot and characters together like a spinner patiently working at a spinning wheel, drawing fine threads of gold from seeming flax. . . . It is a triumphant writing performance that should guarantee an eager audience for future Morrow novels.” —
Atlantic City Press

“Beneath the high-tech space trappings, the author paints a nice little fable about what it means to be ‘human’ . . . Are hatred and blood-lust as necessary for man’s soul as peace and tranquility? In this imaginative novel, James Morrow proposes a thought-provoking answer.” —
Fort Lauderdale News

“Morrow spins a satiric examination of violence that runs from light comedy to Swiftian bitterness, without ever letting the reader feel smugly superior. [He] knows the value of pushing issues to extremes to highlight a central point and the effectiveness of allegory in various guises.” —
Newsday

“An anthropological fable that, for all its cool intelligence, bustles with life . . . Morrow writes a breezy blend of philosophical fiction and blood-stirring adventure.” —
Penthouse

The Continent of Lies

“Technology will improve remorselessly until we can be ‘wired in’ so completely that we can’t tell what’s real and what isn’t.
The Continent of Lies
. . . deals with this subject brilliantly.” —Arthur C. Clarke

“
The Continent of Lies
is superbly crafted. It deftly blends technology, fantasy, and myth and spices the mixture with adventure, humor, and wit.” —
The San Diego Union

“[A] literary cruise missile. It hugs the reader’s consciousness as it roars through time and cultural dimensions, leaving readers stunned, delighted and baffled. . . . Morrow writes so plausibly and so effortlessly about the impossible and the unimaginable that little bits and pieces of his narrative cling to your subconscious. . . . This is high octane writing indeed.” —
Atlantic City Press

“James Morrow takes you to places you have never been before. . . . There are Dante-like descents into various kinds of hell, and—what would a book about dreams be without it?—a generous dollop of Freudian symbolism.” —
Los Angeles Times

“[With] a new plot twist with every turn of the page an encapsulation would be impossible, as well as spoiling the fun. But when was the last time you read any SF that had a meeting of the characters inside the bloated corpse of a giant alien whale? What a story. Read it.” —
West Coast Review of Books

This Is the Way the World Ends

“The most affecting account of nuclear devastation I have read in a work of fiction.” —
Newsday

“Having no answers but only prophecy, Morrow is unafraid to feel pain or to make us feel it. . . . Astute, highly engaging, and finally, moving.” —
Los Angeles Times

“
This Is the Way the World Ends
begins where
Dr. Strangelove
ends. It is a tale told from the other side of the grave—quite literally from the point of view of the dead—and what makes it so wonderful is not merely that it is informed about how and why the world may end, but because throughout it remains a true tale, rich in narrative and moral complexity, magically inventive and comic. . . . [James Morrow] has written a story of the way and the why of our dear and foolish world—its sources of life and of death—that is utterly dazzling and memorable.” —
The Philadelphia Inquirer

“Add to this scenario great suspense, fast action, a complex and sympathetic protagonist, and unrestrained black comedy, and the result is a wonderfully surreal novel worthy of comparison with the best political satire of this century.” —
Fort Worth Star-Telegram

“Just when you start thinking that everything that can possibly be done with the post-catastrophe novel has been done, along comes James Morrow to prove you wrong. . . .
This Is the Way the World Ends
is a magnificent surrealistic dark comedy that will scare you even as it amuses you, and it will leave you deeply moved. This is one of those books that other writers wish they had written.” —
Pittsburgh Press

“If Kurt Vonnegut had collaborated with Jonathan Schell on an antinuclear novel, the result might be
This Is the Way the World Ends
.” —
The New York Times Book Review

“Very few books make me cry, but this one did. . . . James Morrow has a surrealistic edge to his imagination and a devastating ability to disembowel by satire.” —
Controversy in Review

“[Its] lineage might be
Stranger in a Strange Land
out of
Slaughterhouse-Five
. . . . Such a summary as this can barely suggest the dense, hyperkinetic plotting of James Morrow’s novel, its welter of acute detail . . . or the vigor of its cartoonishly sharp-edged characters.
Only Begotten Daughter
is a rich, intelligent tour de force.” —
The New York Times Book Review

“Imagine, if you will, Joseph Heller at his satirical best writing
The Satanic Verses
. Sort of a Catechism-22. What you would have would be close to James Morrow’s
Only Begotten Daughter
, a delightfully devilish novel that tiptoes along the fringes of science fiction while treading heavily on imperious practitioners of Western theology.
” —Chicago Tribune

“A cheerfully secular rendition of the Second Coming . . . Morrow’s ambitious and wide-ranging satire plays straight with Scripture, reserving as its targets the intolerances and vanities of fallible humanity . . .
Only Begotten Daughter
is an intelligent, humane, and unusually funny novel.” —
Newsday

“Morrow unerringly targets nerve endings that most readers won’t know they have until he zaps them, throwing out wild bits of social commentary and incidental barbs with impeccable timing. This novel invites comparison with Vonnegut and even Rushdie.” —
The Washington Post

“It’s probably an insurmountable challenge for a reviewer to try to capture in a few hundred words the captivating delirium of this runaway carrousel of a book. . . . Morrow’s novel is suffused with a peculiar innocence, an earnest inquiry into the nature of godhead, and an enduring if battered optimism about the importance of love. . . . If the narrative makes us flinch, it’s only because it is itself so unflinching in its dissection of human foibles and cruelty. Ultimately, Morrow has given us a frank and fascinating novel that provokes rather than offends—a remarkable work of fiction with the power to disturb our complacency and challenge us to consider anew the thorny questions of life and faith.” —
South Bend Tribune

“Several notable novels of this gloriously multi-faceted type have been published within living memory; examples include Kurt Vonnegut’s
Cat’s Cradle
, Bernard Malamud’s
God’s Grace
, and Jeremy Leven’s
Satan
. James Morrow’s
Only Begotten Daughter
is the latest, the most vivid, and perhaps the best of the lot. It has enormous chutzpah and schmaltz by the bucketful, and despite the relentlessness of its darker side it still contrives, against all odds, to carry its due quota of pure
mechaieh
.” —
The New York Review of Science Fiction

“Like many who see the world clearly, Morrow is driven frantic by the insanities committed in the names of the gods. He has written a work of satiric imagination as compassionate and horrifying as the book’s publisher bills it. . . . It has fangs, and it bites. It is also very warm, very human, very humane.” —
Analog

“Heretical? Yes. Exuberantly so. The dark satirical tone of
Only Begotten Daughter
makes for a potent novel.” —
People

“A quick and delightful read, with a sharp, unmerciful edge that would have pleased old Jonathan Swift.” —
Minneapolis Star-Tribune

“Morrow leavens his serious theme with sizable dollops . . . of humor, without losing poignancy—his prose is compulsively readable, sprinkled with nicely understated jokes. At 100-odd pages, the novel may seem short, but satire can become tiresome when played out too long—the length, like almost everything else about this novella, is nearly perfect.” —
Publishers Weekly

“
City of Truth
is a humorous and pointed futuristic novel about a man facing his son’s inevitable death in a city which bars lies. Morrow’s thought-provoking and fun portraits of the results of an utterly truthful society contrasts strongly with a man’s refusal to equate hope with lying.” —
Midwest Book Review

“[True] satire is the work of a moralist in the grip of savage indignation, and gifted with sharp eyes, tongue, and wit. In the novella
City of Truth
, James Morrow wields a darkly glittering scalpel. . . . The cavortings of Morrow’s Veritasians and Dissemblers are hilariously petty as all humanity, and poignant as a dying child.” —
Locus

“[Jack Sperry’s] story is that of one man’s struggle to find the balance of hope that lies somewhere between truth and fantasy. Sperry’s pain is even more poignant because Morrow handles it so deftly, without false sentimentality. Morrow is a Jonathan Swift for our times, and his
City of Truth
works on many levels, from wickedly sharp satire to touching tragedy.” —
Starlog

“[The] ending is affecting on the human level and besides, it’s probably worth the read just for the cited notice on a cigarette pack:
WARNING: THE SURGEON GENERAL’S CRUSADE AGAINST THIS PRODUCT MAY DISTRACT YOU FROM THE MYRIAD WAYS YOUR GOVERNMENT FAILS TO PROTECT YOUR HEALTH
.” —
Asimov’s Science Fiction Magazine

“[Morrow’s] latest collection demonstrates that his rapier wit has lost none of its edge as it encompasses twisted scenarios. . . . All the stories manifest Morrow’s penchant for exploring the dark underbelly of technological promise and extracting quirky moral conundrums. Morrow’s fans will revel, and first-time readers may find his grim humor making fans of them, too.” —
Booklist

“Morrow is a true satirist, a moralist who identifies some of our many faults and offers a wholly new perspective (not solutions, mind you, that is not his job) through his droll distortions. . . . [He] obviously loves his fellow human beings and has a sharp eye for their foibles. His wit and pen are sharper still. If you are unfamiliar with Morrow, this wonderful collection . . . is a superb starting point.” —
Cemetery Dance

“The first thing you’ll notice about James Morrow is what outrageous ideas he concocts. . . . If you have an offbeat sense of humor, Morrow’s
The Cat’s Pajamas
will have you in stitches.” —Fantastic Reviews

“Who else among modern SF writers (and Morrow, to his great credit, refuses to refuse the label) has worked so hard to sharpen the swords of satire? And had such fun doing it? . . . He is our Voltaire, casting a cold eye on both the follies of the day and the fashions of philosophy. He is our Swift, skewering his enemies with a smile. He would be our Twain, except that we already have one. He is in fact our Morrow.” —Hugo and Nebula Award–winning author Terry Bisson in the book’s Introduction