Read Only in Time (A Mystique Antiques Novella) Online

Only in Time (A Mystique Antiques Novella) 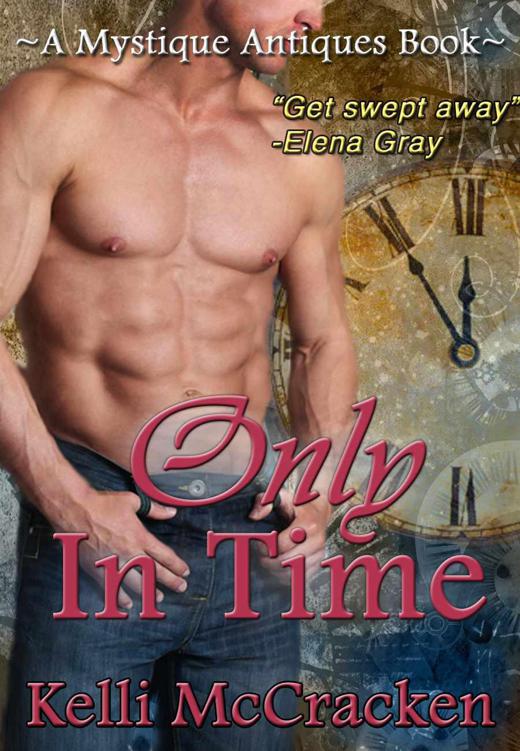 Other Works by Kelli McCracken

The tires on the old Chevy pickup squealed in protest as Jonah McCabe slid into a parking space. Ripping the seatbelt from its lock, he grabbed the slip of paper off the dash, scanning the words until he found what he wanted.

He gripped the handle, pushing the door open. One last look at his wrist brought his eyes to his watch.

Damn. Time was almost up.

Slamming the door behind him, he raced toward the main doors of the train station. The scent of stale Old Spice lingered in the air when he entered.

He scanned the waiting area for a familiar face. One that made his heart catch every time he looked upon it.

A feminine voice echoed off the walls of the station from the PA system. The cheeriness in her voice knotted his gut, but not as bad as when she announced the final boarding call for New York.

Pushing his legs to move faster, he ignored the tightness in his chest. Time wasn’t a luxury. Never had been. Maybe one day, he would get his shit together. Take life a little more seriously.

He’d have no other choice if he didn’t make it in time to stop the train.

Weaving through the wooden benches, he searched for the boarding entrance. It wasn’t the easiest task. Recent passengers crowded the lobby, huddling with family and friends they’d been separated from for only God knows how long.

Other people were assembled at the ticket booth, making purchases and checking schedules. Just ahead, another crowd pushed into the building. Bold letters hung above the door with words he’d been anxious to see.

The sign should have read,
Last Chance at Happiness
. Because that’s what waited on the other side of the door.

Forget stopping the train. He had to stop
her
.

As the seconds ticked away in his head, Jonah raced past the ticket counter, ready to curse anyone who tried to stop him from going outside. Luckily, no one did. He said a silent prayer as the cool metal handle greeted his hands. One hard push had the door opening.

The scent of diesel assaulted his nose as he stepped onto the cement pad. He searched for the train that should have been in front of him. Running to the edge of the platform, he stared at the empty tracks below, trying to tune out the metal squeaking in the distance.

The shrill sound of a whistle startled him as he turned just in time to see the end of the train pulling away.

“Hey,” he shouted. “Hey, stop!” Zipping past a crowd of onlookers, he made it to the end of the pad. But not soon enough to reach the train, though that didn’t stop him from protesting. “I need to get on that train! Please! I need to…”

His pleas fell on deaf ears. The only patrons remaining were those who’d seen off their family or friends. While a few shot him glares adorned with folded brows, most just ignored him.

He’d ignore himself, too, had the roles been reversed.

The one thing he couldn’t ignore…the ache in his chest. How it built near his heart, spreading like a deadly virus through his arms, legs, even his head. Everything ached. His lungs burned when he tried to take a breath.

As his hands fell to his sides, the slip of paper he’d been holding fell toward the ground. He didn’t bother catching it. He didn’t need it anymore. Everything he ever wanted just disappeared, along with the taillights of the train.

Wallowing in the pain, he wanted to make sure he never forgot how bad this hurt. To breathe. To think. To stand and watch his life go down the drain. That way he’d never make this same mistake, again. The mistake of giving his heart away to a woman. A woman who would never know how much he loved her. That he’d come to stop her. To give her the reason she’d been searching for.

Too bad time hadn’t been on his side. Would have been if he hadn’t—

The crumpled newspaper crackled in Ally Jacobs’ hand as she removed the last picture from the box on the floor. Her eyes trailed over the other dozen boxes spread across her new living room. Each one held items from her apartment in New York. Items that needed a new wall, or shelf, or drawer. She’d be here a week or more if she tried finding the perfect spot for everything. Not that she would. The picture in her hand held more significance than anything else she owned.

Letting the paper fall to the floor, she swiped her palm against the glass, eyeing the handsome man in the photo. Dressed in his BDUs, insignias donned his collar. A diamond nestled between three arcs and three chevrons. Her father looked every bit the army first-sergeant he was. Even while hugging her.

As she placed the photo on the table near the window, a tinge of sadness pinched her heart. She adjusted the frame before draping dog tags over it. Her finger slid across the engraved words
Jacobs, Robert.

Hard to believe it had been fourteen years since her mother received that dreaded visit by the military base chaplain. The visit that rocked Ally’s world, even at the age of ten. She wished she had done as her mother told her. To go to her room and shut the door. Had she listened instead of peeking around the hallway corner, she wouldn’t have heard every painful word that slipped past the chaplain’s lips. How her father had been killed in the line of duty. Not by a bullet, but from an explosion.

The words coming from his mouth weren’t as soul shaking as the question her mother asked…if she would have anything to bury? Ally inhaled a shaky breath, remembering how the chaplain shook his head. How his eyes found hers right after, causing his mouth to gape.

Blinking back tears, she eyed the dog tags once more, grateful her father had misplaced the set right after they moved to Savannah. Out of his belongings she’d kept, she treasured the tags the most. Probably because he allowed her to wear them whenever she asked. Or because she thought they contained super powers, because her dad had been her hero.

Shifting her focus out the window, she gazed at the other houses on her street, wondering how many people still lived in the old neighborhood. While the street she’d grown up on was a few blocks away, she’d been on this street plenty. Cassie Clarke used to live at the end of the road. Her best friend’s parents still did, luckily. She may have never found this house had they moved elsewhere.

Ally couldn’t help but wonder if someone else’s parents still lived across from Cassie’s old house. A certain someone who had made life in Savannah bearable after her father’s death.

Did
he
still live in—

The doorbell chime echoed through the house, making Ally’s heart pound in her chest. Each thump resonated in her ears as she walked toward the door. Not many people knew she’d returned, short of her mother and Cassie. Her dinner date with her mom wouldn’t be for a couple more hours, which meant the unexpected visitor could only be one person.

As the door swung inward, Ally expected a set of brown eyes to be staring back at her. Instead, gray ones did. They were a striking contrast to the brown uniform he wore.

“Afternoon, ma’am. I have a package for Ally Jacobs.” He raised his hands in front of him, holding a small rectangular box.

“That would be me.” She grabbed the electronic device he handed her. With her quickest, sloppiest signature recorded, she returned the device, exchanging it for her package.

She barely heard him say goodbye as her eyes scrolled across the sender’s information. Her old address in New York. What had her roommate sent?

Curious to what the package contained, she tore at the cardboard until a letter slipped out. She stared at the perfectly constructed letters on the paper.

I told you that you’d forget something. Hope you’re enjoying Savannah. Will miss going out for coffee in the mornings. Don’t forget about me. ~Darcy

Smiling at the paper, she walked back to the living room, placing the letter on the coffee table before sitting on the couch. She could have sworn she went over every inch of the apartment before she left. Hard to believe she could have forgotten something.

She gazed down at the box in her lap, unfolding the flaps until the item inside stared back at her. Seeing the old, blue t-shirt stole the air from her lungs. She hadn’t forgotten to pack it. She didn’t realize she still had it.

The soft cotton teased her fingers as she pulled the shirt from the box. A wave of pine and juniper swirled inside her nose. God, she loved the smell of Polo cologne. Which is why she had bought
him
a bottle for Christmas during their senior year. Had she known it would be their last Christmas together…

Pushing back the ache in her heart, she stuffed the shirt inside the box. She couldn’t afford this little trip down memory lane. And
he
sure as hell didn’t deserve any of her tears. She had given him enough. He made his decision just as she made hers. No sense in revisiting a place that closed its doors to her before she stepped foot on the train.

She’d never go there again. Would never ask for the key to unlock Jonah McCabe’s heart.

The growl of a zipper filled the hotel suite before Jonah flung open the lid to his suitcase. He tossed a pair of socks inside, half pleased when they landed in the gap beside a stack of shirts. If only everything else in his life would fall into place with such ease.