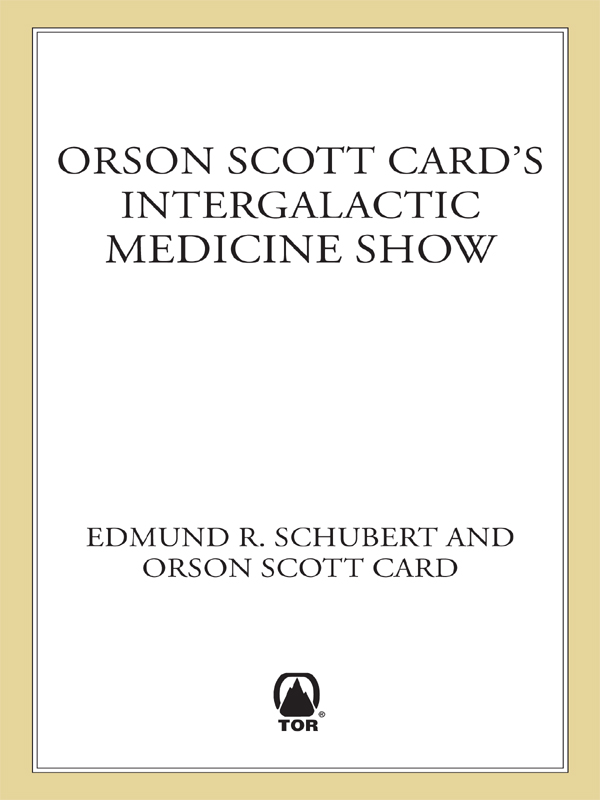 The Folk of the Fringe

Maps in a Mirror: The Short Fiction of Orson Scott Card

Pastwatch: The Redemption of Christopher Columbus

A War of Gifts

THE TALES OF ALVIN MAKER

Shadow of the Hegemon

Shadow of the Giant

Speaker for the Dead

Children of the Mind

The Memory of Earth

The Call of Earth

The Ships of Earth

How to Write Science Fiction and Fantasy

Copyright infringement is against the law. If you believe the copy of this e-book you are reading infringes on the author’s copyright, please notify the publisher at:
us.macmillanusa.com/piracy
.
Copyright Acknowledgments

“In the Eyes of the Empress’s Cat,” by Bradley P. Beaulieu

“Tabloid Reporter to the Stars,” by Eric James Stone

“The Mooncalfe,” by David Farland

“Hats Off,” by David Lubar

“To Know All Things That Are in the Earth,” by James Maxey

“Beats of Seven,” by Peter Orullian

“The Box of Beautiful Things,” by Brian Dolton

“A Young Man with Prospects,” by Orson Scott Card

All reprint rights reassigned to authors.

In the Eyes of the Empress's Cat
BY
B
RADLEY
P. B
EAULIEU

The Box of Beautiful Things
BY
B
RIAN
D
OLTON

Call Me Mr. Positive
BY
T
OM
B
ARLOW

Credits for the Illustrations

The Medicine
wagon rolls into town. With brightly painted signs, it advertises cures for every ailment, from cancer to impotence to senility to drought. The man on the wagon can do miracles.

Of course, they’re all fake. You’ll get a bottle of
something,
but it’s a sure thing it won’t cure any of the things he’s said it will cure.

He’ll keep only one of his promises, and that one is the unstated one: He’ll put on a great show.

He stops the wagon; he stands on top of it, or at the top step at its back, and he makes his pitch.

And here’s where his talents have to shine. He has to have a voice that can be heard all through a town square, in order to draw a crowd. He has to have a face that knows how to zero in on an audience, member by member, so that they take his words seriously, so that their eyes are drawn to him and can’t escape.

Even if they know he’s lying, even if they’re determined not to believe, they can’t bear to miss the
show.

We fiction writers are all medicine men. All we have to sell are lies. Everyone knows they’re lies. We
admit
they’re lies. If somebody sues us for libel, we
insist
they’re lies. We made it up. None of it ever happened anywhere, to anybody.

So why do people buy these tales of ours?

One reason is the voice. We fiction writers speak with confidence. We declare that we
know
the answers to the great mysteries, and we can tell you with certainty:

Why people do the strange, hurtful, terrible, wonderful, cruel, kind things they do.

That’s the miracle of our made-up stories. When we tell you
why
a person does something, nobody can argue with us. Nobody can say, “No, the
real
reason he did it is something else entirely.”

Because the person doesn’t exist. It’s a character, existing only in the storyteller’s mind. There is no authority but the author.

And yet…when the author gets it right, the characters he made up resonate with us. They feel true and right: Yes, this is why people do what they do. Now I understand. Things make sense. And in the midst of fiction, awash with lies, we tie ourselves to the mast of a kind of truth we cannot ever find in the real world.

So we authors speak with a voice of command. And as we weave our tales out of thin air, if you believe in them, you allow us to spin threads in your own mind and begin to weave a fabric in your memory. It is composed of pieces of your own experience that we cannot see, but when we say certain things, your own memories are awakened and fibers of this and that from your real life get twisted into the threads and woven into the textiles that our text creates.

It’s magic. When we’re done, you have memories implanted in your minds—vivid ones, powerful ones, treasured ones, if we’ve done our job aright—and these memories we’ve given you are clearer than anything in real life.

That’s the medicine in our bottles. That’s the show we put on.

Short stories
are the treasurehouse of fiction. Few writers are ready to tackle a novel as their first venture into fiction. It is in the short stories that they can try out their voice, make their first tentative explorations into new worlds, and test new ideas to see if there’s any truth in them.

In recent years, the market for short fiction has shrunk to a shocking degree. Yet the need for it has not. I believe that the reason is not that the audience does not want short stories, but rather that the marketplace offers no easy way to reach an audience.

Printing magazines is expensive—even on the cheap pulp paper that has typified the magazines in the speculative fiction genre. Publishing online carries far less risk, and a far higher percentage of earnings can go to the writers.

That’s why I launched
Orson Scott Card’s InterGalactic Medicine Show
a few years ago, at
http://www.oscIGMS.com
.

From the start, I determined that even though it’s expensive, our stories would all be illustrated. For me, that’s one of the hallmarks of magazine publication. The story begins with a splash of evocative art to set the tone.

At first I edited the magazine myself, but quickly discovered that editing a magazine takes more time than I could devote to the task—not if I wanted to do it well. I was doing a bad job of keeping up with submissions and getting issues out on time. So I fired me.

That’s when I invited Ed Schubert to take the helm. He is doing a superb job, except, of course, for the problem of working with me. I have promised an
Ender’s Game
story in every issue, in the hopes that we can draw some of the readers of that series of books to this magazine. Sometimes Ed has to wring my ear a little to squeeze the story out anywhere near the due date. But that’s why he gets the big bucks.

Oh, wait. He doesn’t get big bucks. He gets paid with bags of dirt. But it’s
good
dirt. Magical dirt. Dirt just right for growing magic beans. If you know where to get magic beans.

Even with the low overhead of an online magazine, there are few ways to get the word out that the website even exists. That’s why I proposed to my publisher, Tom Doherty of Tor, that we bring out an anthology of stories that will show the variety and quality of what our magazine offers.

So please, don’t just sample our wares here in this book. Come to our website and see the latest issues and read the latest stories. We think you’ll find that
our
kind of patent medicine really does deliver.

I've Been Waiting for You by Mary Moriarty
Miss Julia Paints the Town by Ann B. Ross
High Hunt by David Eddings
Candor by Pam Bachorz
The Dark Design by Philip José Farmer
A Spit In The Eye - For The Benefit Of Mankind by Sally Dillon-Snape
Vampire Blood by Kathryn Meyer Griffith
Wanted with Murder (A Rilynne Evans Mystery, Book Five) by Vakey, Jenn
An Improper Companion by April Kihlstrom
Darkest Dreams by Jennifer St. Giles