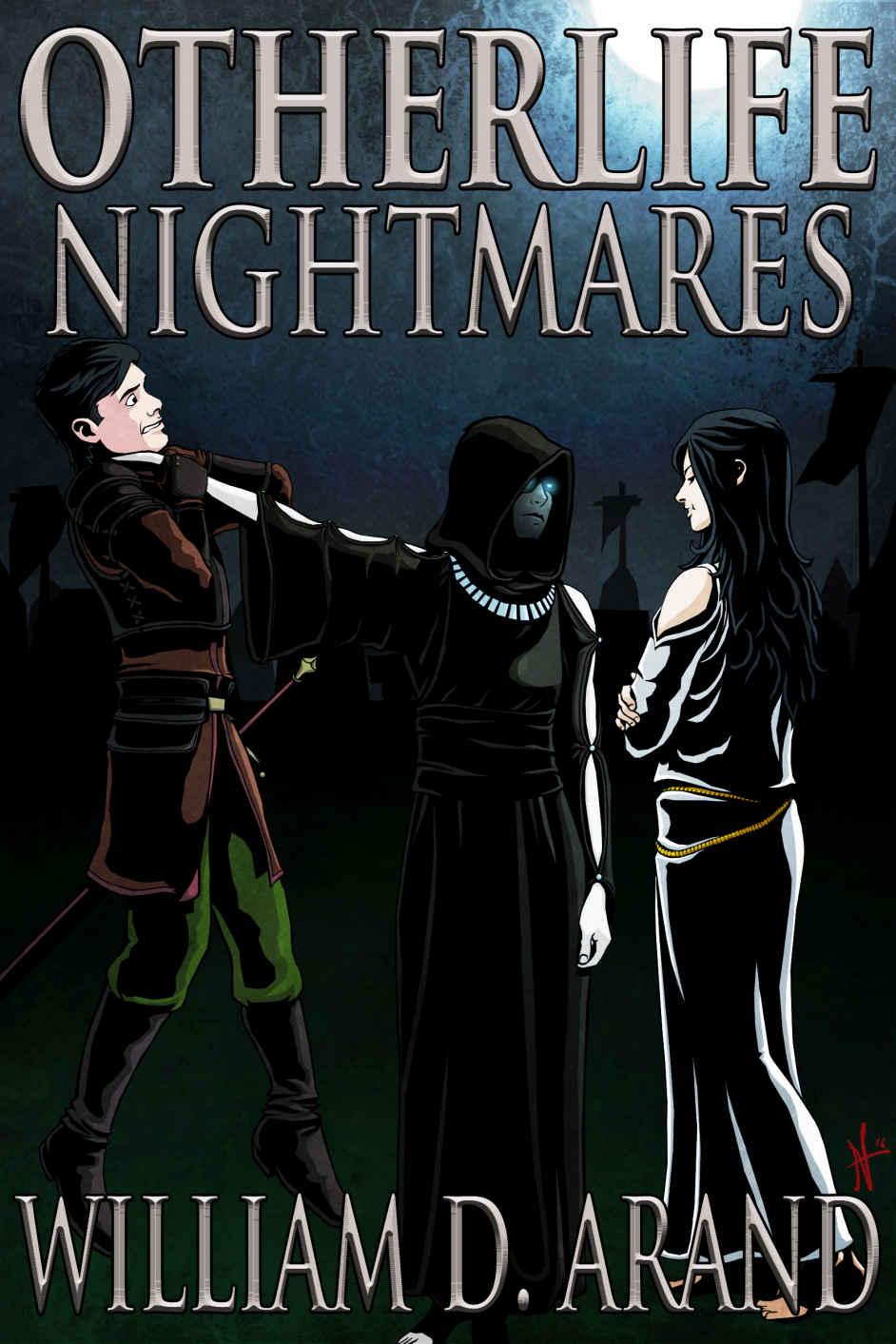 Chp.3 Flags for Everyone

Chp.5 Misery of the Truth

Chp.17 Only a Minute

To my wife Kristin, who encouraged me in all things.

To my son Harrison, who decided that I still don’t need to sleep and should write.

To my family, who always told me I could write a book if I sat down and tried.

To my friend Nick, who has too much patience with my insanity.

Thanks to my Beta Readers:

All rights reserved. No part of this book may be reproduced in any form or by an electronic or mechanical means - except in the case of brief quotations embodied in articles or reviews - without written permission from its publisher.

The characters and events portrayed in this book are fictitious. Any similarity to real persons, living or dead, is purely coincidental and not intended by the author.

Prologue - The Story So Far -

Runner Norwood and the crew of his ship are trapped in a game, and he only has a few vague ideas as to why. In a bid to free everyone, Runner has been working at increasing his level. With every level a few of Runner’s memories return.

He encountered Hannah Anelie in the woods while trying to find civilization. Of mixed lineage—Human and Sunless—she was a half-breed thief who was down on her luck and short on time. In hiring her he gained his first ally.

Finally getting a clue from a villager as to where he could level up quickly, the two traveled to an old fort inhabited by Orcs.

In destroying the fort, he rescued three people who joined his party. First was Thana Damalis, a Sunless Sorceress who had been captured by the Orcs.

Along with the Sorceress he freed Katarina Saden, Thana’s traveling companion, a stalwart Barbarian Warrior.

Lastly they found Nadine Giselle, a scarred and disfigured Human merchant who had been left to die in the back of the throne room.

From completing the dungeon, Runner nearly reached the level cap allowed to starting classes. In order to progress he needed to get a class promotion, which would allow him to continue to level up.

Bolstered by their success at the fort, the group set out for Crivel, a Human city. The reason they selected this city above any other was that it offered class promotions. That and it was the only one that would allow them all to enter as a group despite being different races.

While en route, they discovered they were in a race against the clock. The city was the target of a military thrust that hoped to besiege and capture the city.

As if fate conspired against them, a stream of roadblocks was thrown at them.

They were attacked by a band of ship’s crew who had turned to robbing and raping travelers, were ambushed by a fanatic and an ex-girlfriend, survived an attack by the vanguard of the besieging army, were confronted by a rapist in a home of living dead people, and finally were attacked by a selfish crewmate who forced Runner to make a choice. A choice between an AI and a crewmate.

In the moment of the attack, Runner realized that his group members had transcended their original programming. They were sentient and very much alive, with their own thoughts and feelings.

Ultimately Runner chose his party members over a member of the ship’s crew.

Trying to run damage control on the situation, Runner attempted to cover up the murder by altering the medical log that held the evidence of the murder.

Runner discovered that not only were they trapped in a game, possibly far from home, but time had literally flown by.

The ship had been in stasis for forty-four thousand years. They’re now in the future and the worries from only a few minutes ago no longer mattered.

At long last the party reached Crivel and completed their promotions a day ahead of the army. They departed the next morning and escaped with only hours to spare.

Having come to terms with the situation, Runner was eager to explore this lush new world.Fate intervened, and Runner was contacted by Srit, a mysterious figure Runner had talked with a few times previously.

Srit holds the key to many of Runner’s questions.

There was so much to do. A world to explore. One that Earth had been unlike in a very long time. There was a lot of time to enjoy whatever this life could hold, and plan for whatever was outside. They’d only just escaped Crivel an hour ahead of the besieging force. Nothing could compare to the feeling of accomplishment.

Runner raised his eyebrows at the sudden message. He’d hoped to get in contact with Srit again soon, but this was beyond his wildest hopes.

“I see. Lady Death, I’m afraid I’m being summoned by Srit,” Runner said to Thana, addressing her by her nickname. “Promise I’m not talking to myself. Any more than the usual that is.”

“Hmm. I dislike this. Why am I unable to see this person again? Or hear them?” she asked. Her brown eyes demanded an answer from him. Her desire wasn’t something he could casually ignore.

Runner thought about that for a moment, watching her brush her black hair back from her face as the light breeze toyed with it.

“I honestly don’t know the answer to that. I’m hoping to find out. You’ll get to hear half the conversation at least.” Plastering the best smile he could manage on his face, he nodded at her slowly.

Scoffing, Thana smiled back as she shook her head. Her sharp teeth came into view between her full lips. She flicked a dismissive hand at him in acceptance.

“Proceed then, Master Runner. I’m sure this’ll be enlightening. Or at least amusing.”

“Much obliged, Lady Death, by your leave. Alright, Srit, I’m ready. I’ve been looking forward to talking to you. Lots of questions.”

I also have questions.

“Right, then. I propose an exchange. Quid pro quo. Question for a question. If a party feels the other has answered inconclusively, they can request information. The second party is not obligated to elaborate, but I imagine the game would end should one side be dissatisfied with the answer. Are we agreed?”

There was no immediate response as there had been previously. Runner imagined Srit was probably picking his statement apart one piece at a time to determine what he meant.

Maybe I should dumb it down,
Runner thought. He started to think of how to phrase it differently when Srit replied.

Agreed. I shall go first. What are you?

“I’m a lieutenant in service to the Sovereignty. What are you?” Runner said, addressing the horizon stretched out in front of him. The font Srit used actually was more readable against the skyline.

Invalid response. What are you?

A frown crossed his face as he considered the question anew. Srit’s response left a lot to be desired, but it did communicate more than the words. It felt a bit too “binary.” Changing his dialogue to match the speaker, he tried again.

“Please redefine the question, original inquiry vague.” Thana quirked an eyebrow at him as she walked along beside him. He couldn’t deny it had sounded strange even to him. He shrugged his shoulders and held up his hands in a helpless gesture.

What species are you?

Sighing, Runner pressed his fingertips to his brow as his other hand rested on his hip. With that one single question, many of his own had been answered. Srit wasn’t human. More troubling was that Srit didn’t even know what species it was.

“Human. Homo sapiens,” Runner answered bleakly. Mentally pausing after his response, he considered his earlier questions and decided they were no longer relevant. One could reasonably assume Srit wasn’t human. Which of course made many of his questions irrelevant.

“Using this map of a galaxy as a reference point”—Runner paused and called up a star chart of the Milky Way as a whole. It had a deep zoom function and listed each planet along with spatial coordinates—“where am I?”

It was a long shot, but he figured any spacefaring race would at least know what galaxies in their neighborhood looked like. If Srit wasn’t able to answer, this whole thing would go from bad to worse.

Accessing relevant information. Listed as Galaxy one. You are in Galaxy one.

“Srit, I would ask for clarification on that response. If I’m in Galaxy one, where in that galaxy am I? Please use the designations in the star ch—”

“Riders!” Katarina shouted from ahead. The large red haired Barbarian drew her sword and fell in beside the wagon. A slow steady pull on the reins from Nadine and the horses came to a halt as well.

Hopping down from the driver’s box, the blonde unhooked her large crossbow from her belt. Her right hand slammed a bolt home and ratcheted the cranequin in under a second. Snapping it up to her shoulder, she slid her finger onto the trigger guard and rested it there. Taking firm hold of the weapon, she eyed the surroundings.

Hannah’s stealthed silhouette appeared near the edge of the roadbed. Her lithe figure was ghostly and low to the ground. In each hand she held a short sword, and her head swiveled around, searching for the danger.

“Gimme a direction, Kitten,” Runner called out to the dark-eyed warrior. In his right hand he held his sword, and he walked up to stand beside her. In his left hand he pulled together a
Fireblast
attack but held it in check. He began rapidly filling the
Fireblast
with
Lightning
,
a recent addition from their promotions in Crivel. His broken game master status would allow him any class he wanted, even if he didn’t have enough points to get the right stats.

In his desperate search to find a role for himself, he’d found a few classes that fit the bill. Each role had a starting point that had overlapping statistics and attributes. Using those as a foundation, he could build himself up to be a close second place in any category.

Each and every class he gained had a focus in dexterity, agility, or intelligence.

The first he’d picked up was Duelist. It focused on critical damage dealt by a single weapon or two small weapons.