Read Out in the Country Online

Out in the Country 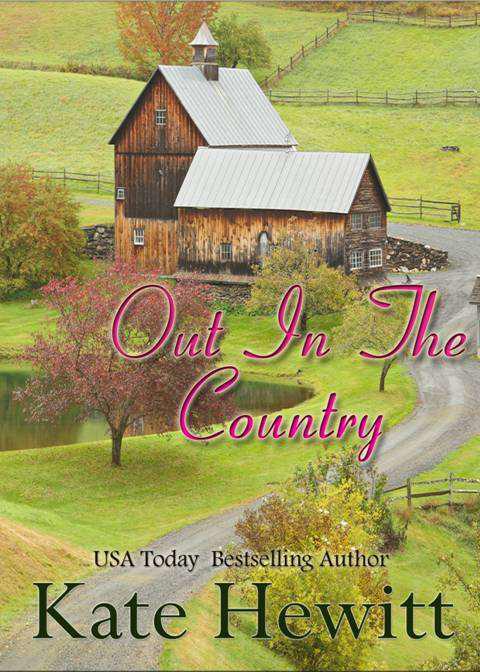 Widowed a year ago, Lynne Marshall believes she's ready to start a new chapter in life. She plans to exchange the bright lights of Manhattan for her home country of Scotland and open a country hotel with her childhood friend Jess and her fiancé Rob. Her daughter Molly will manage the home front as she starts her first year of teaching in one of the city's toughest schools. When those plans are suddenly and tragically ruined, both Lynne and Jess are left shaken--and unsure what the future holds for either of them.

A weekend trip to Lynne's husband's home town in rural Vermont brings new opportunities, decisions, and a second chance at love for both Lynne and Jess... if they dare to risk their hearts again. Meanwhile Molly faces difficult choices of her own, and must decide where her heart truly lies.

Previously published as a magazine serial, Out in the Country is a heartwarming novel celebrating the strength of family, friends, and second chances of all kinds. Written by USAToday bestselling author Kate Hewitt.

Out In The Country

This ebook is licensed for your personal enjoyment only. This ebook may not be re-sold or given away to other people. If you would like to share this book with another person, please purchase an additional copy for each person. If you’re reading this book and did not purchase it, or it was not purchased for your use only, please delete it and purchase your own copy. Thank you for respecting the hard work of this author. To obtain permission to excerpt portions of the text, please contact the author at
[email protected]
.

This is a work of fiction. All of the characters and events portrayed in this book are products of the author’s imagination or are used fictitiously.

Out In The Country

Lynne Marshall looked around her dining room table and smiled. Outside she heard the muted roar of New York City’s constant traffic, but here in her apartment there were more comforting sounds: her daughter Molly’s trill of excited laughter, the warm murmur of her in-laws’ conversation, followed by her friend Sarah’s answering chuckle.

Of course, there were missing sounds from this table. Her husband Adam’s rich baritone voice, gently teasing their only daughter while his eyes held hers, had been absent for a year and a half. Yet the consuming ache of that sudden loss
had lessened with time, and now Lynne silently counted her blessings, even as she felt the first fizz of anticipation for the future.

“Lynne?” Sarah broke into her thoughts, her eyebrows raised. “I was just asking you if you’ve been to Molly’s school?”

“I’ve seen the outside,” Lynne replied,
“but I wasn’t able to go in--the city’s schools are so careful about security these days.”

“As well as they should be,” Kathy, her mother-in-law, chimed in. “What with all the school crime there has been...” She turned to Molly. “Are you nervous, sweetie? At least the security’s for your protection.”

“Not a bit,” Molly replied firmly. Her eyes glinted with fierce pride, and determination and excitement radiated from her. It was, Lynne thought affectionately, almost catching. Molly had
been studying for the last five years for tomorrow, the day when she’d finally begin teaching, and according to her, transforming New York City’s schools, student by student. “Remember, Granny,” Molly continued, “I grew up right here in the city. I went to a public high school--”

“Yes, but you went to one with selective admission!” Sarah interjected with a smile. “You’ll find a high school with less rigorous standards a bit different.”

“Exactly why I applied for the position at Cooper High School,” Molly replied. “I want to reach the kids who aren’t being reached--not the ones that are happy to be there.”

“That’s our girl,” Graham,
Lynne’s father-in-law, said with a chuckle. “You remind me so much of Adam. Always determined to make a difference.”

There was a moment of quiet as they all remembered Adam, silently acknowledged his absence. Then Kathy turned to Lynne.

“And we need to celebrate your new start! Are you terribly excited, Lynne?”

Again Lynne felt that fizz of anticipation as she thought about her own new beginning. “I’ve been so busy arranging travel plans, I haven’t had time to think of it properly,” she admitted. “But I am starting to feel excited--Jess has been giving me the updates by phone and e-mail.”

“I can’t believe you’re really going,” Sarah said, and Lynne wondered if she was imagining the wistful note in her friend’s voice. Sarah had been her best friend in the city for fifteen years, but Jess had been her friend forever... or at least since they both were six.

“I can’t believe I am, either,” she said, keeping her voice light. “It’s all happened so quickly.”

Just two months ago Jessica had rung her with her plans to open a country hotel in Perthshire. It had been a long standing ambition, although Lynne had always though it as more of a daydream they’d both indulged in over the years more than anything else. Jess had a successful career as an editor for a culinary magazine in Edinburgh, and Lynne had been busy with her life in New York. She’d never thought her friend would throw it all in for a risky business venture.

“Rob’s got it all planned,” Jess had informed her, all bright, breezy optimism. “He has an investor--Guy somebody--who’s really keen. Hotels with sports amenities are all the rage now, you know--”

“What do you know about sports, Jess?” Lynne asked dubiously, and Jess had just laughed.

“Absolutely nothing, of course! That’s Rob’s specialty. I’ll take care of the kitchen, and we just need someone to front the house... add the homey touch.” She’d paused meaningfully, yet it had still taken nearly a full minute for the penny to drop.

“Me?” Lynne asked, her voice rising to a squeak, and Jess laughed again.

“Yes, you! Just think of it, Lynne. We’d have such a grand time together, and this is something we’ve talked about doing--”

“Talked about,” Lynne agreed, “but I never thought...” She trailed off, remembering the dream they’d once had of opening a hotel together. “We were little more than school girls,” she protested, even as she felt herself imagining it, picturing color schemes, flower arrangements, special weekend offers... “It’s ridiculous!”

“Maybe so, but I feel like being ridiculous,” Jess answered with determined recklessness. “I’m forty-six years old, and I’ve played safe my whole life. I want to do something, even if it’s risky... even if it is ridiculous.” She paused to let this sink in before adding, her voice turning serious and somehow knowing, “Don’t you?”

Did she? Lynne didn’t answer, the phone still pressed to her ear, as she considered the question. For twenty years she’d been Adam’s wife, maintaining his home, helping his career as one of the city’s most prominent architects, living in his shadow. She didn’t regret a single minute of it, yet now the possibility of doing--and being--something different held a new and surprising appeal. “Maybe...” she allowed, and she could almost picture Jess smiling, carried along by her own enthusiasm.

“It’ll be fantastic, Lynne. Just what both of us need. Rob’s got it all sorted...”

Rob, Lynne knew, was Jessica’s fiancé. They were planning to marry at Christmastime. Lynne had never met him; she hadn’t actually seen Jess in several years.
Yet neither time nor
distance mattered when they’d plaited each other’s hair--and tugged hard on those plaits--in primary school back in Scotland.

In the end, the decision had been surprisingly easy to make. She’d hung up the phone and gazed around at her spacious, airy, empty apartment, and realized suddenly how little she had holding her in New York City. Of course, there was Molly, determined to transform the city’s schools, but Lynne knew her daughter would be busy with her own life--and perhaps needed her own space.

There wasn’t much else to keep her rattling around in this apartment, wondering what to do next.

“And the hotel is up and running?” Kathy asked, drawing Lynne back to the present and the circle of smiling faces around her table. She shook her head.

“Not yet. The financing is in place, the property has been found, but I’ll be coming over in the preliminary stages, to help decorate and organize, that sort of thing.”

“Well, we know you’re good at that!” Graham chimed in jovially, and Lynne acknowledged his remark with a smile.

“I’m sorry Jason couldn’t be here,” she said to Molly.
Her daughter had been dating the same boy from university for three years, and he was now finishing his graduate degree in New Hampshire. “I’m sure he’ll want to hear all about your first day tomorrow.”

“He promised to call me in the evening.” Molly’s face was flushed with excitement, although Lynne saw her nibble her lower lip, a nervous habit from childhood that she’d never been quite able to break.

“I’m sure you’ll have plenty to tell him,” Sarah said. “How many students are in your classes?”

“Thirty-two,” Molly admitted with a tiny grimace. “They’re short staffed, and they have the maximum in every class.”

Sarah nodded, and Lynne wondered--not for the first time--just what her daughter was signing on for, teaching in one of the city’s most challenging schools. She’d given up trying to dissuade Molly from taking such a difficult first teaching post long ago; she knew if Adam had been here, he would have encouraged her to take the most chaotic classroom in the city and work her magic on it, as he’d done with his own life’s work of transforming some of the city’s most unappealing buildings into both fascinating and functional places to live and work.

“Anyway,” Molly said, “Jason’s coming to visit in a couple of weeks. By that time I should be settled at Cooper.”

“Are you going to look for an apartment?” Sarah asked. “I suppose you’ll have to share...”

“Actually,” Lynne broke in, “Molly’s staying right here, and looking after things for me while I’m gone. That way I don’t have to sublet.”

“That makes sense,” Sarah said after a moment, and Lynne rose from the table.

“I think it’s time for cake,” she said brightly. “Sarah, pour us all another glass of champagne, and I’ll get the plates.”