Read Out of the Blue (A Regency Time Travel Romance) Online

Out of the Blue (A Regency Time Travel Romance) 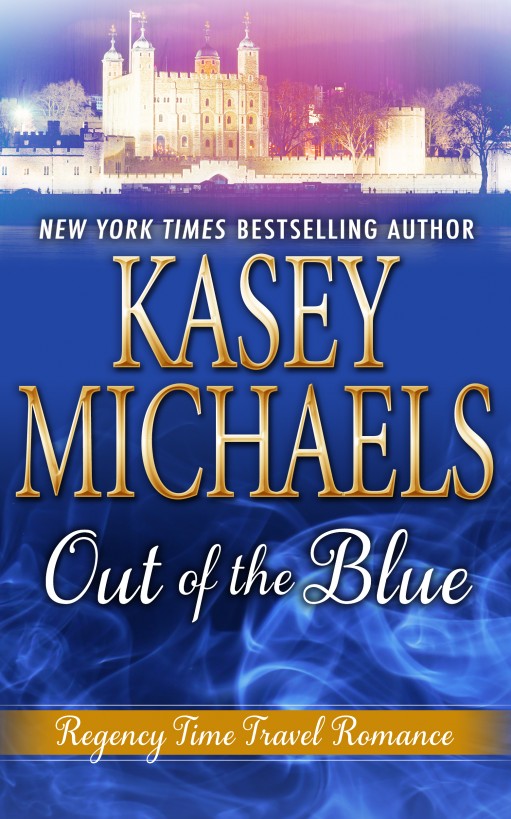 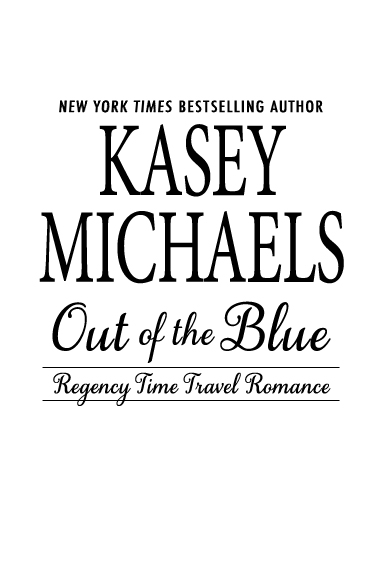 E-Book published by Kathryn A. Seidick at Smashwords,
2015

All rights reserved. No part of this publication may
be reproduced or transmitted in any form or by any means,
electronic or mechanical, including photography, recording or any
information storage and retrieval system without written permission
of the author.

Nine Brides and One Witch
: A Regency Novella
Duo

A Masquerade in the Moonlight

The Legacy of the Rose

Out of the Blue
(A Time Travel)

Waiting for You
(Love in the Regency, Book
1)

Someone to Love
(Love in the Regency, Book
2)

Then Comes Marriage
(Love in the Regency, Book
3)

Too Good To Be True
(D&S Security
Series)

Love To Love You Baby
(The Brothers Trehan
Series)

Be My Baby Tonight
(The Brothers Trehan
Series)

Stuck In Shangri-La
(The Trouble With Men
Series)

Everything’s Coming Up Rosie
(The Trouble With
Men Series)

This Must Be Love
(Summer Lovin’ Series)

T
he heavy wooden
door slammed shut with a finality that echoed ominously through the
high-ceilinged stone chamber. Its closing banished nearly all the
thin daylight, along with the sight of any other humans—not that
gaolers were necessarily human, at least not in the more lofty
sense of the word. These particular gaolers, notably one Miles
Forest, a man of such terrible brawn and rankness of flesh and mean
beady eyes as to set fear in the hearts of even his fellow
henchmen, were not to be missed.

Unless, of course, they did not show up again
in time to serve dinner.

The young lad who had been thinking these
thoughts began to whine and turned to his older brother, tugging on
the boy’s gored velvet sleeve. “We will eat, won’t we, Ned? Would
there be a kitchen here in the Garden Tower, d’ya think? I’m most
frightfully hungry.”

The older boy brushed his brother’s hand away
and began pacing the starkly furnished room. He stood a good half
foot taller than his sibling and had a wonderfully straight spine
that remained rigid even in these unwelcoming surroundings. Walking
to the narrow arrow slit that served as the single window, he stood
on tiptoe to look out over the Thames and the boat traffic that all
but clogged the dirty water from shore to shore.

“Stop thinking of your stomach, Dickon,” he
commanded at last, turning to face the lad who had begun to snuffle
in earnest. “We’re royal prisoners. Royal prisoners don’t think of
their stomachs. They pray for their necks.”

“Ned!” Dickon squeaked, covering his slim
throat with both hands. “You don’t suppose Uncle Gloucester will
have us dragged out to the garden, like Lord Hastings, and chop off
our heads?” The boy’s lower lip quivered as hunger gave way to
terror. “Would he stick them on pikes, and hang them from the
rafters while he dined? He wouldn’t do that, Ned. Uncle has always
loved us, you know that. Besides, you’re the king now. Mother told
us so. You’re King Edward V, and I am Richard, Duke of York.”

Edward looked disdainfully at his brother
before turning his head to peer into a dark corner where a hungry
mouse scavenged for crumbs. He pointed to the rodent. “King,
Dickon? Behold His Majesty the King’s single subject save you, Your
Royal Highness. Not much of a kingdom, do you think? Mother acted
the fool to give us up to Uncle Gloucester, no matter how he loves
us. Hastings warned her, but she believed our dearest uncle when he
said he would be my Protector. When there is a crown in the picture
it is better to take the word of the devil than a relative, I
say.”

“Never say so, Ned, I beg you. Uncle
Gloucester won’t harm us. And Mother will come, you’ll see. And
then we’ll go to Westminster, and you’ll be properly crowned, and
you’ll have Knights for the Body to guard us and Squires for the
Body to dress and undress us and two dozen Squires for the
Household, and we’ll have candies and sweetmeats all day long,
and—and you’ll order the whole of the Tower of London razed to the
ground and we’ll never come to this cold, bloody terrible Garden
Tower again!”

The young king held out his arms and his
brother, sobbing, fell into them. It could be difficult being a
king, Edward realized, his own lip trembling, when one’s years
numbered only thirteen, one’s father lay newly cold in his tomb,
and one’s mother, vain, ambitious fool of a Woodville or no, wasn’t
anywhere to be found.

As he patted Dickon’s heaving back, Edward
pondered this latest move on his uncle’s part. It had been bad
enough being confined to the royal apartments, and the move to the
White Tower, combined with the disappearance of all their familiar
servants, worried him more than he dared let on to his brother, but
this latest maneuver on the part of his uncle had proved more than
merely uncomfortable. It smacked of the ominous.

“Shhh, Dickon,” Edward said comfortingly,
hoping the good Lord wouldn’t strike him down for his lie.
“Everything will be fine. You’ll see.”

Three weeks passed, and the “ominous”
maneuver had all but done its work, for the spartan tower, lack of
servants, and poor food had reduced both Edward and Richard to
naught but boys: dirty, sniffling children who—fearful for their
lives—prayed almost incessantly and slept only in snatches.

Their gaolers, especially Miles Forest, gave
them comfort by neither word nor deed, and the future seemed
bleak—especially since Edward had overheard two of their gaolers
discussing the rumored demotion of the two princes to bastard issue
from an invalid marriage between their father and Elizabeth
Woodville and Uncle Gloucester’s supposed lavish coronation at
Westminster, making him Richard III, King of all England.

England had need of a king, of that much
Edward had been convinced since he had been old enough to sit up
straight for his lessons. It did not, however, need two kings, or a
runny-nosed Duke of York as heir first in line to the throne. Even
if their uncle could move the Pope to declare them bastards,
allowing Edward and his brother Richard to continue to draw breath
could only be considered a serious blunder, at least as long as
there remained a single Woodville in all of England.

Their father’s middle brother, the Duke of
Clarence, had drowned in a butt of Malmsey wine some five years
past, perishing in the Tower by way of that unhappy accident after
being imprisoned for plotting against the king—and whether he had
been helped to this untidy death or not remained a question. More
important to Edward at the moment was the fact that Clarence’s
death had moved Richard, Duke of Gloucester, into the position of
third in line to the throne behind Edward and Richard.

Removal of the two boys would make the Duke
of Gloucester king in one single, clean stroke, although—if news of
the coronation were true—Gloucester seemed to have already taken
the matter into his own hands.

What else could Edward believe in, locked in
this terrible room, hearing what he had heard, if not his
once-beloved uncle’s ambition? To the world outside the Tower,
Edward and Richard must already be dead, not just declared
bastards. All that remained was to feel the sharp sting of the
headman’s ax. Why was Uncle Gloucester waiting? It was dangerous.
What did he hope to gain? If Edward were king, he knew he shouldn’t
delay for a moment in securing his throne.

Daily Edward’s prayers lengthened as his time
spent resting on the thin straw pallet grew shorter. To make
matters worse, if this were possible, Richard had taken a chill and
had begun coughing badly from morn till night.

Perhaps worry over Richard explained why
Edward couldn’t sleep, that or the strange feeling he had that this
particular night out of so many nights seemed special. The stars
appeared brighter, the night sky bluer, and Edward felt more
invigorated than he had done since passing across the barbican at
Lion’s Gate and entering the Tower.

But if he were to say that the night felt
magical, his brother would think his mind had slipped a notch, so
Edward kept his thoughts to himself.

He turned away from the narrow window to look
at Richard, who was sitting on one of the pallets, his spirit so
broken that he no longer took the time to tie up his shoe points.
The young king’s resolve stiffened and he raised his head, tilted
his chin, and stared defiantly at the door. Enough was enough! How
dare they treat their king this way? The time had come for action.
He had passed beyond fear, beyond pride, even beyond hope. If there
were to be an end to this madness, he, Edward, would choose the
moment.

And that moment was now.

Crossing to the door, Edward began beating
his fists against the heavy oak, demanding to be brought before his
uncle at once for an explanation behind this evil, traitorous
imprisonment.

But his demands were answered only with
curses and raucous laughter. At last, his small store of passion
spent, Edward slumped to the floor, knowing that he would never see
his uncle again. He and Dickon were doomed, and they were not even
to be permitted a defense.

How long he sat on the cold stone he could
not know, but it had grown fully dark when the door opened and two
large men stepped inside.

Miles Forest. Edward recognized the man’s
rough voice in the darkness, as well as his grotesque, overblown
shape. Edward’s heart fell. He had been right. This starry night
would be special. It would be the night he and Dickon died.

The second man, slightly smaller, seemed to
hesitate at the doorway. “Oi don’ts loik this,” he said in a small
voice. “It ain’t natural.”