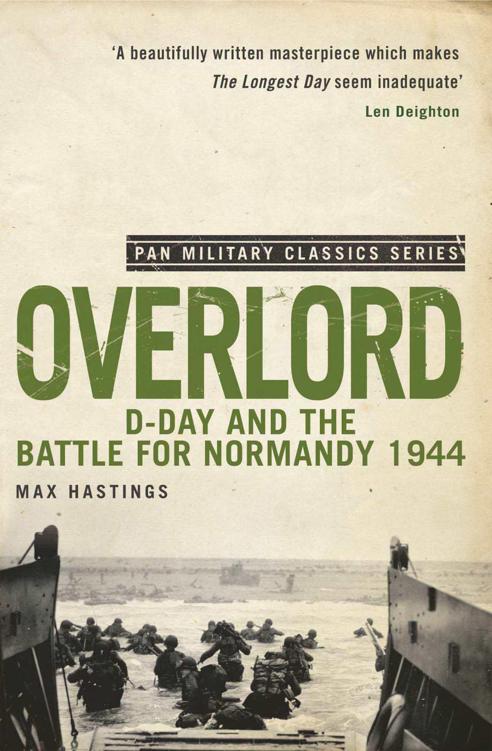 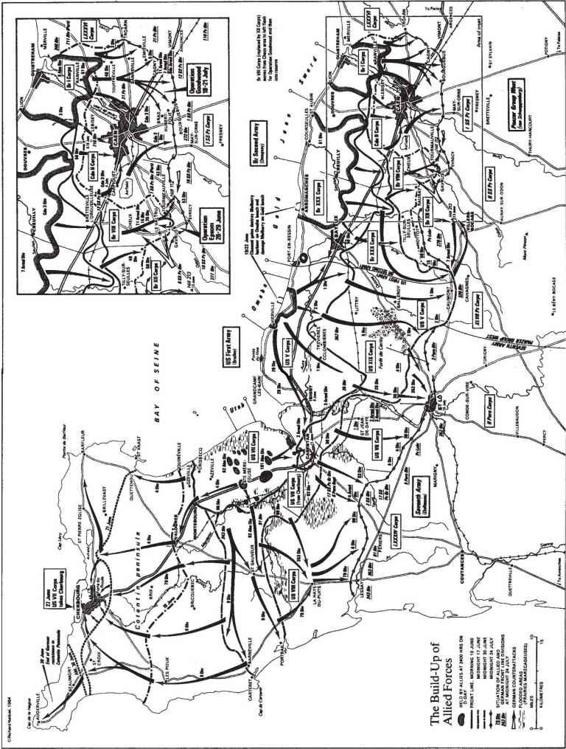 1 » ‘Much the greatest thing we have ever attempted’

The overture; The American beaches; The British beaches; Inland

4 » The British Before Caen

5 » The Americans Before Cherbourg

The
bocage
; The battle for Cherbourg

6 » The German Army: Stemming the Tide

From the beachhead to the front; Casualties

The fall of Caen; GOODWOOD

COBRA; The limits of air power

Appendix A: Chronology of the Normandy Campaign

Appendix B: Allied Order of Battle

Bibliography and a note on sources

The Build-Up of Allied Forces

The Disposition of German Forces on D-Day

D-Day: the Push for Caen

The struggle for Normandy was the decisive western battle of the Second World War, the last moment at which the German army might conceivably have saved Hitler from catastrophe. The post-war generation grew up with the legend of the Allied campaign in 1944–45 as a triumphal progress across Europe, somehow unrelated to the terrible but misty struggle that had taken place in the East. Today, we can recognize that the Russians made a decisive contribution to the western war by destroying the best of the German army, killing some two million men, before the first Allied soldier stepped ashore on 6 June 1944. It is the fact that the battle for Normandy took place against this background which makes the events of June and July so remarkable. Much has been written about the poor quality of the German troops defending the Channel coast. Yet these same men prevented the Allies almost everywhere from gaining their D-Day objectives, and on the American Omaha beach brought them close to defeat, even before the crack units of the SS and the Wehrmacht approached the battlefield. In the weeks that followed, despite the Allies’ absolute command of sea and air, their attacks were repeatedly arrested with heavy loss by outnumbered and massively outgunned German units. None of this, of course, masks the essential historical truth that the Allies eventually prevailed. But it makes the campaign seem a far less straightforward affair than chauvinistic post-war platitudes suggested. Captain Basil Liddell Hart suggested in 1952 that the Allies had been strangely reluctant to reflect upon their huge superiority in Normandy and draw some appropriate conclusions about their own performance: ‘There has been too much glorification of the campaign and too little objective investigation.’
1
Even 40 years after the battle, it is astonishing how many books have been published which merely reflect comfortable chauvinistic legends, and how few which seek frankly to examine the record.

It remains an extraordinary feature of the war in the west that, despite the vast weight of technology at the disposal of the Allies, British and American soldiers were called upon to fight the German army in 1944–45 with weapons inferior in every category save that of artillery. Only in the air did the Allies immediately achieve absolute dominance in Normandy. Yet if the massive air forces denied the Germans the hope of victory, their limitations were also revealed. Air power could not provide a magic key to victory without huge exertions by the ground forces.

Post-war study of the campaign has focused overwhelmingly upon the conduct of the generals, and too little attention has been paid to the respective performance of German, British and American ground troops. How could it be that after the months of preparation for OVERLORD, Allied armoured and infantry tactics in Normandy were found so wanting? The British, to a far greater degree than their commanders confessed even years after the campaign, were haunted by fear of heavy infantry casualties. I believe that Brooke and Montgomery’s private perceptions of the campaign – and perhaps those of Bradley, too – were profoundly influenced by the knowledge that the German army was the outstanding fighting force of the Second World War, and that it could be defeated by Allied soldiers only under the most overwhelmingly favourable conditions. In Normandy, the Allies learned the limitations of using explosives as a substitute for ruthless human endeavour. It seems fruitless to consider whether an Allied plan or manoeuvre was sound in abstract terms. The critical question, surely, is whether it was capable of being carried out by the available Allied forces, given their limitations and the extraordinary skill of their enemies.

Few Europeans and Americans of the post-war generation have grasped just how intense were the early OVERLORD battles. In the demands that they made upon the foot soldier, they came closer than any other in the west in the Second World War to matching the horror of the eastern front or of Flanders 30 years earlier. Many British and American infantry units suffered over 100 per cent casualties in the course of the summer, and most German units did so. One American infantryman calculated that by May 1945, 53 lieutenants had passed through his company; few of them left it through transfer or promotion. The commanding officer of the 6th King’s Own Scottish Borderers found, when his battalion reached Hamburg in 1945, that an average of five men per rifle company and a total of six officers in the unit were all that remained of those with whom he had landed in Normandy in June 1944. ‘I was appalled,’ he said. ‘I had no idea that it was going to be like that.’ He, like the Allied nations at large, had been conditioned to believe that industrialized warfare in the 1940s need never match the human cost of the earlier nightmare in France. Yet for those at the tip of the Allied spearhead, it did so.

This, then, is a portrait of a massive and terrible clash of arms redeemed for the Allies, but not for the Germans, by final victory. The early narrative of the background to the landings and their initial stages will be familiar to some readers, but its inclusion seems necessary for the sake of completeness, and it makes such a marvellous tale that it bears retelling. Thereafter, I have tried to examine much less closely studied aspects of the armies’ tactics and performance, and to consider some unpalatable truths about what took place in the summer of 1944. Because Normandy was a vast campaign, it is impossible to retrace the history of every battle and every unit in detail, without achieving the tedium and bulk of an official history. By focusing upon the fortunes of a few individuals and units at different moments of the campaign, I hope that I have been able to give an impression of the experiences and difficulties endured by thousands of others. I have described each nation’s sectors of the front in separate chapters, even at the cost of some loss of chronology, because only thus can the progress of the armies be considered coherently. Where I have quoted men by name, the ranks given are those that they held at the date concerned. I have adopted American spellings for American units and direct quotations from American personnel. I have made little mention of material that is familiar to every student of war history – Group-Captain Stagg’s weather forecasting problems, the commanders’ formal statements, the airborne operations on D-Day – which have been exhaustively described in other books. Instead, I have concentrated upon aspects which I hope will be less familiar: the battle inland and the personal experiences of men whose stories have never been told before, above all the Germans. The German army’s achievement in Normandy was very great, and I have sought out many of its survivors. I have tried to write dispassionately about the German soldier’s experience without reference to the odiousness of the cause for which he fought.

I have interviewed scores of American and British veterans, and corresponded with hundreds more. I am especially indebted to Field-Marshal Lord Carver, Field-Marshal Sir Edwin Bramall, General Sir Charles Richardson, Major-General G. P. B. Roberts, Major-General Sir Brian Wyldbore-Smith, General Elwood R. Quesada, General James Gavin and Brigadier Sir Edgar Williams. I also owe much to the librarians of the London Library, the Royal United Services Institution, the Staff College Camberley and the Public Record Office. For this, as for my earlier books,
Bomber Command
and
Das Reich
, Andrea Whittaker has been a splendid German interpreter and translator. Among the host of relevant literature, I must pay tribute to Nigel Hamilton’s latest volume of his official biography of Lord Montgomery, and to Carlo D’Este’s important recent study of the strategy of the Normandy campaign, both of which I was able to consult in the later stages of writing this book, and which were invaluable in causing me to consider some issues and some documents which would otherwise have passed me by. As always, I owe a great deal to the patience and forbearance of my wife Tricia who, having endured in recent years my spiritual life in a Lancaster at 20,000 feet and in the midst of occupied France, has now spent many months amidst the ruins of Caen and St Lô. Carlo D’Este and Andrew Wilson MC were kind enough to read the completed manuscript and to make helpful suggestions and corrections, although of course they share no responsibility for the narrative and the judgements, which are entirely my own. I am also greatly indebted to my editor in London, Giles O’Bryen, to Philippa Harrison, and to Alice Mayhew in New York.