Palmer-Jones 04 - A Prey to Murder 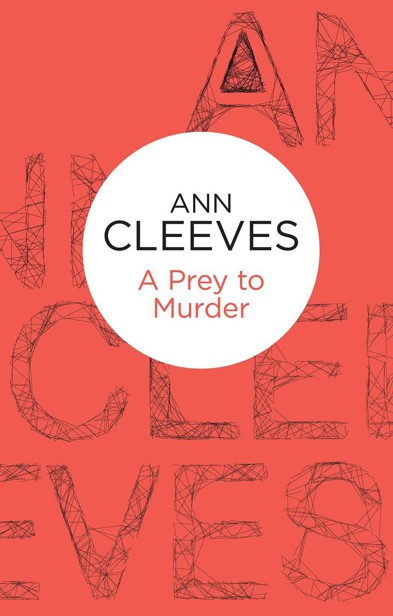 Ann Cleeves is the author behind ITV’s VERA and BBC One’s SHETLAND. She has written over twenty-five novels, and is the creator of detectives Vera Stanhope and Jimmy Perez – characters loved both on screen and in print. Her books have now sold over one million copies worldwide.

Ann worked as a probation officer, bird observatory cook and auxiliary coastguard before she started writing. She is a member of ‘Murder Squad’, working with other British northern writers to promote crime fiction. In 2006 Ann was awarded the Duncan Lawrie Dagger (CWA Gold Dagger) for Best Crime Novel, for
Raven Black
, the first book in her Shetland series. In 2012 she was inducted into the CWA Crime Thriller Awards Hall of Fame. Ann lives in North Tyneside.

For the wardens, volunteers and RSPB members
who help to protect wild birds of prey

The hotel seemed to be run exclusively by women but that was an illusion. The most practical and necessary work was done by a man but the women were so loud and busy that Richard Mead was never noticed.

There were three generations of women at Gorse Hill. Eleanor Masefield had been brought up there and lived there with her husband until he died. She was then in late middle age and he had left her with very little money. She could have sold the house, bought a convenient bungalow somewhere pleasant, and lived comfortably on the remainder of the profit. Instead she chose to stay at Gorse Hill and turn it into a hotel.

‘It’s my duty to stay,’ she told her daughter, without explaining exactly what she meant.

It was not that she had a special affection for the house. She would have considered such feelings foolish. She felt that she contributed to the town simply by being there. If she were to move, Sarne would never be the same. Something valuable would have been lost. In fact she stayed through a kind of laziness. To move from Sarne would mean meeting new people, going to a different church, explaining who she was. Here her identity was already established.

Veronica, her only child, was the noisiest, most obtrusive woman in the house. She had none of her mother’s calm and dignity. She chattered incessantly to the guests. They all knew her and Eleanor thought they tried to avoid her. The same stories were repeated year after year. Eleanor despised her daughter’s weakness. She always seemed to be tired. She volunteered for too many committees – the playgroup, the Sunday school, meals on wheels, all it seemed depended on her – but she did nothing well.

In her late thirties, Veronica had the sweet, enthusiastic face of a girl. Occasionally her absent-mindedness became so acute that Eleanor wondered if she were mentally ill. Eleanor had discussed the matter with Richard, Veronica’s husband, but he had said that she made Veronica nervous and that if she were not so critical the problem would disappear. While Eleanor would have been pleased to believe she had such power over her daughter that idea seemed to her to be ridiculous.

Then there were the girls, Veronica’s daughters. Helen was seventeen and Frances thirteen. Helen was shy, eager to please. Although she was immature for her age the adults left her to herself. She helped in the dining room in the evenings. Otherwise no one cared much where she was. Frances was dark, brooding and overweight. The family called her Fanny, which she hated. She knew her friends sniggered when they heard the name and when they used it at school it was like an obscenity. Her only passion was her hatred of her grandmother. Until they had moved into Gorse Hill five years before to help run the hotel she had been spoilt, doted on. Eleanor had pronounced her ill-disciplined and untidy. She had forced a regime of routine bed times, set meal times and limited television. Fanny had cried for the lost freedom, then become stubborn and wilful. To compensate for the grandmother’s strictness her parents had spoilt her even more, helping her to defy Eleanor’s rules, bringing her secret treats. Fanny learned to manipulate them all and in a sense her moods ruled the household.

So Gorse Hill had the air of an entirely feminine institution, like an old-fashioned girls’ school or a nursing home, and Eleanor ruled it with a severe and charming authority.

Sarne had been George Palmer-Jones’ home for the first eighteen years of his life. As a boy he had never mixed socially with the family at Gorse Hill, though he and Eleanor were almost contemporaries. He came from a respectable business family in the town – his father was a solicitor – and Gorse Hill with its parties and connections with the outside world seemed very grand and exotic. Nevertheless he and his wife Molly had been guests at the house before it became a hotel. George had known Eleanor’s husband. They were both reputable ornithologists. George was an amateur whose first commitment was to his work as a Home Office civil servant. Stuart Masefield was a professional, an academic who in later life had given up his post with a research council to write books on raptors. George had never liked the man and had been embarrassed by the effusive greeting he received every time they met, the pressing invitations to stay at Gorse Hill. He had never considered Stuart Masefield a friend and all they had in common was the place of George’s birth. Yet he had agreed in the end to spend a weekend with Stuart and Eleanor Masefield. It had been the spring before Stuart died. George had been editing a collection of papers and needed Masefield’s expertise. It had been late April.

The weekend had begun pleasantly enough. There had been, George remembered, a good dinner followed by easy conversation about the history of that part of the Welsh marches. Even then Eleanor had been a good hostess. But the next day Masefield had taken George into the room he called his study. It was a square brown room with one small window which looked on to the hillside. It had the same smell and the same jumble of exhibits as a poor provincial museum. It shocked George profoundly. Two shotguns stood in one corner. On wooden shelves there were rows of stuffed birds of prey, with several examples of the same species, especially golden eagle, buzzard and peregrine. On the walls were a series of photographs of birds on the nest and in two large cabinets tray after tray of raptors’ eggs, many arranged in complete clutches, all carefully labelled. It seemed to George then that the man’s interest in birds was acquisitive, possessive.

‘Aren’t these illegal?’ George had asked.

Masefield smiled secretively, became for George a cartoon of a miser. ‘Oh no,’ he said smoothly. ‘None of them were taken illegally, you know. And they’re all essential for my research.’

Immediately afterwards Masefield had insisted on taking George for a walk. George had not wanted to go but almost rudely Masefield refused to listen to his excuses. They had walked together through a blustery west wind up the hill behind the house. There was a steep, rocky outcrop, a cliff face in the hillside, and halfway up the bare rock was a peregrine eyrie. Peregrines were rarer then, still suffering from the widespread use of pesticides, and on an inland English site in the south were unknown. Despite his distaste for Masefield, George was thrilled to watch the male peregrine carry a pigeon to its plucking post, then fly off again towards Wales.

‘They came back last year,’ Masefield shouted above the wind. ‘There was an eyrie here in Elizabethan times. I knew they would come back.’

His voice was altered, uncontrolled. It was as if the birds had belonged to him, as if in some way he had drawn them back to him. George felt the man was unbalanced and felt suddenly sorry for Eleanor. He suffered the rest of the weekend with unease and did not return to Gorse Hill until after Masefield’s death.

They returned quite regularly when the place was a hotel. George had an elderly aunt in a nursing home in Sarne and they visited her for ritual conversation and afternoon tea. No other relatives were left in the town, so Gorse Hill was the natural place to stay. Besides, George thought they should support Eleanor. He admired her cool efficiency and independence. He was attracted to her elegance. He thought he had been attracted to her since their first meeting. He never discussed Eleanor with his wife but Molly seemed to accept that he enjoyed Eleanor’s company and never objected to staying at the hotel. The food was excellent and she seemed not to mind listening to Veronica’s stories. During their marriage she had never expressed jealousy. She must have known that in fact there was no competition. It seemed to their acquaintances in Sarne that Eleanor was a friend of them both.

Nevertheless, they were surprized when Eleanor summoned them to Gorse Hill. It was spring, almost exactly the same time of year as their first visit. George recognized her voice at once – imperious, attractive and a little older.

‘George,’ she said, as soon as he picked up the phone and gave his name. ‘You and Molly must come to Gorse Hill again. As my guests.’

‘That’s very kind,’ he said politely. ‘Perhaps in the autumn …’

‘You don’t understand,’ she said. ‘I’m concerned about the peregrines, Stuart’s peregrines. The eggs hatched yesterday. I think someone intends to take the young.’

‘Have you been in touch with the RSPB?’

‘Of course.’ She was utterly dismissive. ‘Some impertinent young man told me that there are so many peregrines breeding in Britain now that it’s impossible to warden every vulnerable site.’

It was true. The decline in the use of some pesticides meant that the peregrine was no longer such a rare bird.

‘I suppose,’ George said, ‘ that the society only has limited resources.’

‘I want to hire you, George,’ she said. She shouted so that she seemed older than she was, as if she came from a generation unused to the telephone. ‘ You’re a private detective. Come and look after the birds for me. I don’t want anything to happen to Stuart’s birds.’

George disliked the term ‘private detective’ and never used it. After retiring from his post in the Home Office, when he had worked closely with the police, he had thought there would be excitement enough in bird-watching, in finding rare birds, but he had missed the challenge of work. Now he and Molly ran an advice agency which had come to specialize in missing teenagers. George still had contacts in the legal profession who referred clients to him. He never had to advertise for work but the agency was never so busy that he felt he could turn business away. He hesitated.