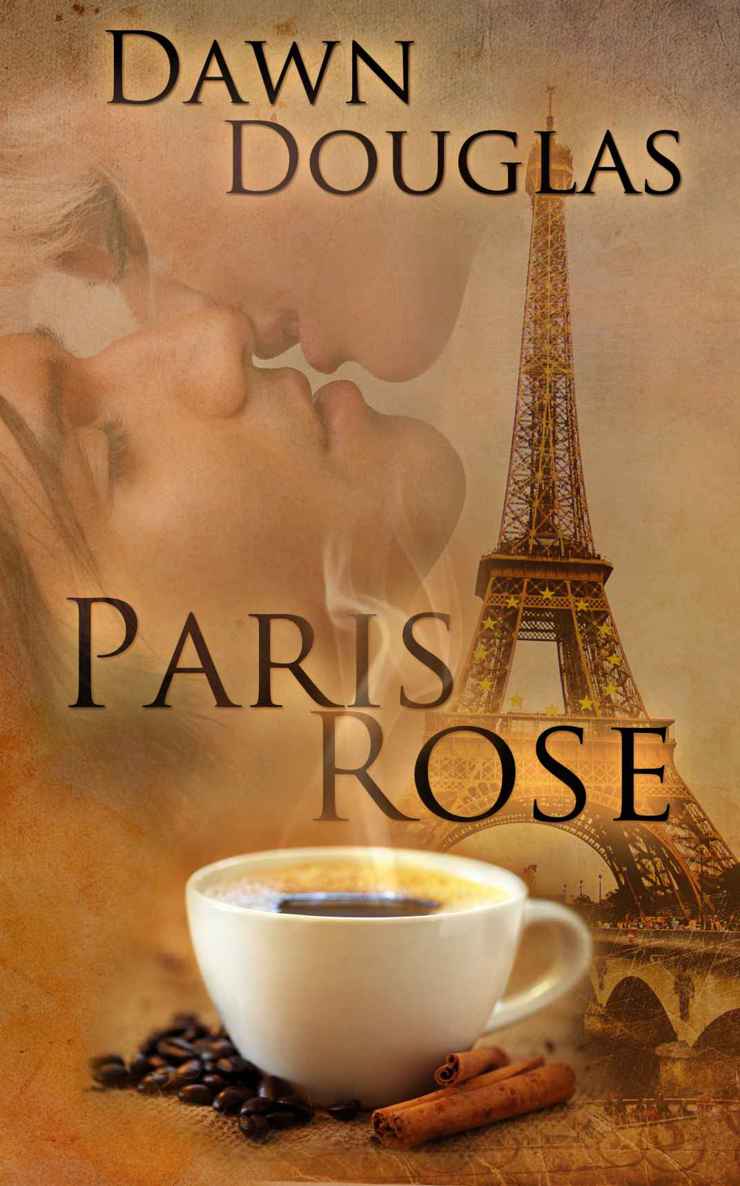 To Doug, my sweetheart and best friend.

Thank you for Paris.

Thank you for everything.

Nick Rawlinson gazed from his family room window in disbelief at the house next door. He’d assumed some company specializing in home renovations had purchased the ramshackle old place with the crumbling front steps and the sagging roof. Apparently not. Two men were scuttling back and forth up the front path, burdened with a sage green loveseat, a flat screen television, a sleek black desk. But it wasn’t the sight of the furniture that had Nick rattled, it was the woman in tight blue jeans and high heels, clutching a small dog and giving the men directions.

She was his ex-wife.

Disbelief turned slowly to anger. What the hell was she playing at?

He slammed down his beer and made for the door, wrenching it open and striding across the lawn. She looked up, their gazes collided and Nick faltered. He clenched his fists furiously—the divorce had been final for a year, and still those big gray eyes made him come slightly undone, made him forget who and where he was. Grimacing, he continued his approach.

“Would you like to tell me what the hell is going on, Lucy?”

“You’ve bought this house?” He gestured at the sad little ranch.

“I must have, because that’s my furniture being taken inside.”

“Have you lost your mind?”

Something like hurt flashed in her eyes, and the little dog snarled at Nick and began to struggle in her arms.

“Well, that’s just tough, isn’t it? I haven’t broken any laws. And if it makes you feel any better, I don’t plan on staying here long.”

“That’s something, I suppose.”

She stared at him for a moment, as if she’d run out of words. Nick wanted to turn away but was rooted to the spot, remembering how much he’d once loved her.

In the end it was Lucy who abruptly turned away. She thanked the moving men, tipped them, and stomped into the house. Still Nick stood there, staring at the way her blonde curls bounced on her shoulders, and at her behind, round and sweet, filling her jeans to perfection. She tossed him a glance, then slammed the door shut.

Lucy covered her mouth with one hand, trying to calm herself down. How could it have come to this? Four years ago they’d been the happiest couple on the planet. Now Nick looked at her with sheer hatred.

She lowered Dexter onto the grubby oatmeal carpet and slowly looked around, wondering if she was making a terrible mistake. She’d told everyone she planned on living in number 78 Meadowlark Drive for no more than a year while she renovated the property, which she’d been able to purchase at practically a giveaway price. A lot of the work she’d do herself—lay wood floors, strip the dingy wallpaper, scrape off the popcorn ceiling—and the rest she’d hire contractors to deal with. It was a great plan. But Lucy wanted much more than a lucrative sale at the end of the year. She wanted her ex-husband back.

She wrinkled her nose as she toured the house. It stank of mothballs and mildew as if the windows hadn’t been opened in decades. Miss Norwood, a retired librarian, had kept cats, too—lots of cats. Lucy remembered them from when she’d lived next door with Nick, always peering from the windows. All those kitties probably had something to do with the smell, too.

Apparently the old lady had been perfectly content with a shabby brown kitchen and avocado fridge. As the kitchen cabinets loomed around her, dark and menacing, Lucy felt suddenly overwhelmed with misery. She wasn’t taking on a wonderful challenge—she was making an absurd mistake. Had she been high on something when she’d imagined she could whip this hovel into an airy, desirable residence while at the same time winning back her ex? The chances of her achieving either of those goals were slim to none.

“What have I done?” she whispered to the outdated kitchen, wanting to cry.

She nodded and blew her nose. “You’re right,” she said softly. “I can’t give up, can I? There’s way too much at stake.”

The mustard yellow shag pile carpet in the master bedroom tickled Lucy’s toes as she changed into work clothes, afraid that if she didn’t begin work immediately she’d be overcome with doubt and lethargy. Dexter stared as she donned a pair of sturdy work boots.

“I can do this,” she whispered fiercely, not sure if she was referring to her angry ex-husband or the neglected house she’d purchased. Downstairs, she began to rip up the cracked, greasy linoleum in the kitchen, not allowing herself to stop until darkness fell outside and she ached all over. At midnight she showered, then fell into bed, telling herself this would all be worth it in the end. An image of Nick floated into her head, and he was smiling at her tenderly, madly in love with her again. Eyes on the prize, Lucy thought.
Eyes on the prize.

Three weeks later, her mood had improved considerably. Sleek, glowing wood floors replaced the shag pile in the bedroom and the linoleum in the kitchen, the house sported a brand new roof, and Lucy had started receiving estimates for kitchen remodels. Dexter seemed to approve of the yard, which Miss Norwood had taken a lot better care of than the interior of the home. There were three rose bushes with peach-colored buds, an apple tree, and lots of Marguerite daisies.

She’d stocked the battered old avocado fridge with wine and soda and spent evenings relaxing on the concrete patio after hours of scrubbing at the ceilings or scraping off orange and brown wallpaper. There she pored over decorating books, her head filling with ideas, glad she’d taken time off work to get a start on this project.

There’d been two further encounters with Nick. Each time she’d called out a tentative “hi.” The first time he’d ignored her. The second time he grunted. Lucy, an eternal optimist, treasured that grunt. It meant she was making progress. Of course it was going to take time. But she was a very patient woman.

Smiling, she grabbed a bottle of water and headed outside, inhaling the aroma of freshly mown grass and deciding to enjoy some downtime after a Saturday morning spent heaving sacks of old
Library Journal
magazines up from the basement and dumping them in trash bags. Dexter shot ahead of her, yapping wildly.

The sounds of music and voices floated from Nick’s yard, and Lucy wondered if her ex had friends over. The aroma of barbecuing meat made her nostrils twitch.

Dexter noticed the commotion, too. There was a weak area at the bottom of the fence, a place where the wood had broken, and the intrepid Yorkie charged to the hole determinedly, scratched at the dirt beneath it to make more space for his body, and wriggled through.

“Dexter—no!” Lucy yelled, but he’d accomplished the feat in a matter of seconds and disappeared next door.

“Shit,” she muttered, running to the fence and peering over.

Nick’s family gaped at her. Sylvia, his mom, was seated in a lawn chair chatting to Nick’s twin sister, Angie. Tom, his dad, presided over the barbecue wielding a large spatula, while Nick stood beside him, glaring at her. Kieran, Angie’s little boy, was chuckling as Dexter dashed around as if he were on speed.

Sylvia rose to her feet, looking amazed. “Lucy? What are you doing here?”

Nick suddenly strode toward Dexter, seized him up, and began to march over to the fence. “Here,” he said, thrusting the dog at her, his expression grim.

“What are you doing next door?” Sylvia inquired again, coming over.

“I—I just bought this house,” Lucy stammered. When she’d had the bright idea of buying up Miss Norwood’s old place and somehow winning Nick back, she had failed to take into account the fact that she might encounter her ex in-laws. They’d surely guess what she was up to. Lucy’s face flamed.

“How have you been, dear?” Sylvia asked.

“Are you still with Berries and Biscuits?” Angie asked, joining her mom by the fence.

“I thought you’d have started your own business by now,” Sylvia said.

“Well, I studied interior design for a while, and I worked in Paris for a few months. I’m just trying to decide what I want to do next,” Lucy said, trying to sound upbeat. The truth was, she’d been floundering.

“Sorry to break into the chit-chat,” Nick said sourly. “But maybe you could repair the hole in your fence. This isn’t the first time your dog has invaded my property.”

Her smile faded as she nodded. “Okay.”

“There’s no need to be rude, son,” Tom remarked quietly.

“Well, it was nice seeing you all again.” Lucy began to retreat.

Everyone except Nick nodded.

“Please—it’s my birthday. Just stay a few moments if you’re busy. I’d love to do a little catching up.”

Lucy looked at her ex-husband. He rolled his eyes, shrugging in defeat.

“Okay, just for a little while.” She smiled, then hurried inside to deposit Dexter safely in the kitchen with some water and pull her hair out from its ragged ponytail. She’d always loved Nick’s family. Coming unexpectedly face to face with everybody reminded her again of just how much she’d lost. Sylvia and Tom were the closest things to parents she’d ever had.

Wishing she had something to give Sylvia for her birthday, Lucy tugged off her jeans and changed into a red cotton dress, shoved her feet into a pair of white flip-flops and headed next door, walking up the path alongside the house she’d once shared with Nick and in through the open door leading into the yard. And then she stopped, and went very still.

Angie was breastfeeding a tiny baby.

Pain tugged at Lucy’s heart as she forced herself to keep going forward and not turn and run. A chair had been set out for her and she sat down, pasting a smile on her face.

The baby was now sitting while Angie rubbed her back firmly. When Rosie burped and a little bubble of milk formed on her puckered lips, Lucy felt a stab of pain, deep in her heart.

“Yeah, I try to remember that when she’s screaming her lungs out at two in the morning!” Angie laughed, and then stopped awkwardly. She flushed, biting her lip. “Sorry.”

“Well, I think this is just wonderful,” Sylvia said. “Just because things didn’t work out between you and Nick doesn’t mean you can’t be friends. I just love the modern attitudes of you young people.”