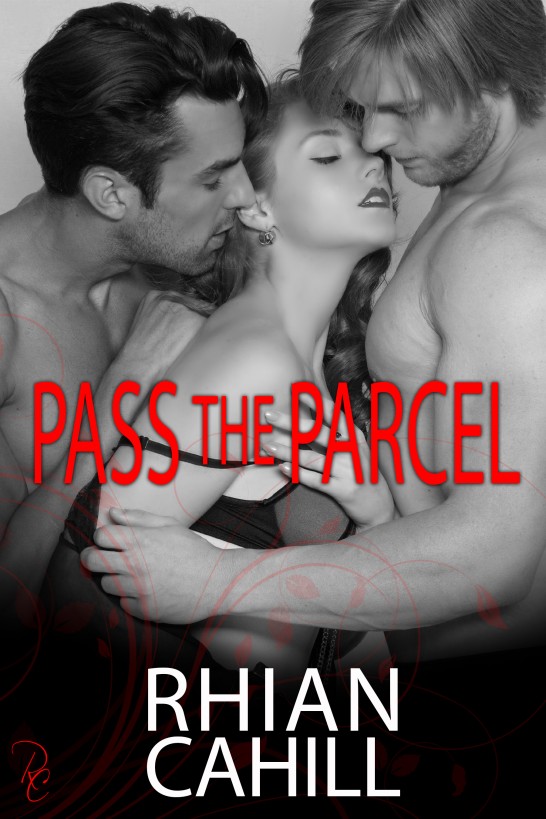 It’s more than a game when their hearts are
involved.

For one night Kitty is going to pretend she’s
someone else. Someone not afraid of going after what she wants. And
what she wants is a night of carnal pleasure with her two
bosses.

Ethan and Finn have wanted their shy,
innocent office manager since the moment they laid eyes on her. But
months of issuing subtle invitations and innuendoes have gotten
them nowhere. Until now.

Now she’s here. With them. And nothing will
stop them from getting what they want—Kitty in their bed.
Forever.

Warning: A heroine out of her depth and
two sexy heroes determine to show her she’s capable of taking them
both on.

eBooks are not transferable.

They cannot be sold, shared or given away as it
is an infringement on the copyright of this work.

The characters and events portrayed in this book are
fictitious. Any similarity to real persons, living or dead, is
purely coincidental and not intended by the author.

Published by Rhian Cahill at Smashwords

All rights reserved. No part of this book may be
reproduced in any form by any electronic or mechanical means—accept
in the case of brief quotations embodied in critical articles or
reviews—without permission.

To the girls who stand beside me and hold me
up when I need it. Divas, this one is for us.

And for KittyKelly. Because you asked.

Kitty took a deep breath and held it.

I can do this.

Breathing out through her nose in a steady
stream, she tried to calm her rioting nerves.

I have to do this.

Lord, if she chickened out now she’d never
forgive herself. But the urge to leave was swallowing her
whole.

For once—just once—she wanted to be the bold,
sexy, confident, go-after-what-she-wants woman she’d dreamed of
being.

I will do this.

Kitty raised her chin and stared at the house
across the street. Lights ablaze and music pouring from inside like
water through a sieve, the place oozed party. For some
reason—whether inspired by the driving beat thumping the walls and
vibrating the very air she breathed or the scantily clad
individuals spilling from inside and milling about on the
lawn—Kitty felt a sexual pull like no other.

Lowering her gaze, she drew in another big
breath and let it go in a rush.

Who was she kidding? Her arousal had nothing
to do with the pounding music or the barely clothed people across
the street. Two words explained her current state of electrified
awareness.

Two names that wrenched her slumberous libido
from its dormant status into the bright lights of need and want.
God.
She’d spent weeks, months—
years
—admiring
them from afar. In her fantasies, she was one of the women they
regularly took to bed. Together. A shiver rolled over her. Kitty
might not be an inexperienced virgin, but she’d never ventured far
into the carnal territory Ethan and Finn liked to play in.

She hadn’t had the nerve.

But she was going to pretend.

For one night, Kelly Owens—aka Kitty—would be
the woman that men wanted. The sexy siren they couldn’t take their
eyes off. The one they wanted to put their hands on.

Even if it killed her.

She took a step in the five-inch heels she’d
borrowed from her sister and winced. And wobbled. Her toes were
squashed together and her arches were stretched so high she was
surprised she hadn’t snapped a tendon or ligament or muscle or
whatever it was that held her toes on. With a grimace, she tugged
on the hem of her ridiculously short skirt and wondered why she’d
thought exposing every centimetre of her legs was a good idea.

Or why she’d purchased the black lace thong
currently flossing her butt cheeks. And don’t even get her started
on the lung-crushing, skin-pinching corset the saleswoman had
talked her into buying. Or why she’d worn the stupid thing.

Sure, it pushed her C cups to an in-your-face
drool-worthy position, but that didn’t take away from the fact that
if she moved faster than a slow walk—not that she dared in her
sky-scraper shoes—she’d slap herself in the face and break her
nose. Or bust a lip. Or poke an eye out with one of her turned-on
nipples.

That was the other problem with the corset.
It didn’t cover her boobs. The torturous contraption made a weird
shelf-like thingy that left two-thirds of her breasts uncovered by
anything but the flimsy halter-top she wore. Or wasn’t wearing
depending on your opinion of what constituted a top. In hers, what
she had on barely resembled a bikini, and Kitty didn’t even
own
a bikini.

She tried pulling her hair over her shoulders
to hide the plain-as-the-nose-on-your-face advertisement of her
arousal, only those pesky tips even managed to navigate their way
through the long strands to sit front and centre. Pointing the way.
The urge to cross her arms over her chest was strong. To curb the
impulse, she curled her fingers and concentrated on brushing her
knuckles on her bare thighs with each step she took.

Turning her head, Kitty saw the two reasons
she was here no more than a car-length away. She stumbled on
nothing in particular and would have fallen flat on her face if
Finn hadn’t sprinted over and slung his arm around her waist. He
pulled her against him, her chest plastered to his and, with the
added height of her killer heels, she found herself eye-to-eye with
one of her leading fantasy men.

“Jesus. You scared the shit out of me.” Finn
glanced down at the road. “You must have hit a bit of loose
gravel.”

Kitty nodded, more than happy for him to
think that than the truth. One—she’d never worn heels this high in
her life. And two—she was so worked up over them—over being here in
these out-of-her-comfort-zone clothes—she couldn’t walk.

Ethan crowded in beside them. “You came.” The
surprise in his voice made her stomach dip and her heart tugged on
her throat as it took a freefall to her toes.

“Um, well, yes.” She glanced from one set of
blue eyes to the other. “Y-you asked me to come.” Oh God. Had their
invitation been a joke?

Ethan grinned and her heart shot back up from
her toes and into her throat like it had been fired from a
slingshot. “We most definitely did.” He leaned back, his gaze
travelling the length of her until he reached her feet. Pursing his
lips, he gave a soft whistle as he brought that shiver-inducing
gaze back to hers. “And might I say how fucking
brilliant
that was.”

There was no denying the heat in his eyes or
the way he looked at her as though he wanted to eat her whole. She
quivered all over.

The air around them crackled. And the courage
she’d dredged up to get her to this point wavered in the face of
such obvious lust. She’d never been on the receiving end of a look
so hungry, and as her body responded with its own hunger—warming,
coiling, dampening—she teetered on her borrowed five-inch
stilts.

The vice around her waist tightened,
squashing her boobs into the hard male chest in front of her.

How had she forgotten Finn held her? Held her
crushed against him. So close she could feel every inch of him.

And there were many.

All of them rock hard.

Kitty swallowed. Licked her dry lips. The
heat of the mid-summer evening was nothing compared to the heat
radiating off Finn. And Ethan.

Off the two of them.

She couldn’t catch her breath.

Her chest ached and her heart slammed against
her ribs, threatening to shove her boobs off their display
shelf.

She needed to breathe. Needed to calm the
chaos churning inside her. But she couldn’t do that with them so
close.

Kitty tried to ease out of Finn’s arms, but
Ethan moved closer, pressing in behind her. Caging her between
them.

“Where you going?” he murmured in her ear,
sending goose bumps racing over her skin and fire racing over every
nerve ending.

“I, um.” Kitty glanced around, her heart
pounding louder than the music blaring around them. She avoided
their eyes, her gaze darting from one thing to the next until it
landed on the house. “Inside?”

Air rushed from Ethan’s lungs and the steel
rod stretched across his shoulders melted away. He’d seen Kelly’s
fear. Seen the uncertainty, the urge to flee that had flashed
through her eyes, and it killed him to stand there and let her
decide whether or not to stay. He wouldn’t make her stay, but he’d
do everything he could to convince her she wanted to.

He reached for her hand and slid his fingers
through hers. “Let’s go then.”

Finn loosened his grip and turned her so she
was tucked into his side. “Stick close. These things can get a
little wild.”

Wild wasn’t the half of it. The last one of
these parties they’d attended had gotten so out of control once the
party co-ordinator had left, even their eyebrows had been raised.
And that was saying something.

He doubted things would be out of hand this
early in the night but gave Kelly’s hand a squeeze. “Don’t worry.
We’ll look after you.”

They’d take such good care of her she’d never
want to be away from them. Ever.
Shit.
He was getting
ahead of himself again. Kelly was here—with them—and for now that
was all that mattered—it was enough—a start. The rest would fall
into place if it was meant to.

God, he hoped it was meant to.

“Mike. Friend of ours,” Finn answered.

“You remember Mike? He was at the office for
a month or so about a year back,” Ethan added.

Ethan swivelled his head to see what had
snagged Kelly’s attention. And there was their host. All six foot
six inches of him. “Hey, Mike,” he called out.

Mike held his hand out to Ethan. “Glad you
guys could make it.”

“You remember Kitty,” Finn said as he shook
Mike’s hand.

“I do indeed,” Mike murmured as his gazed
raked over the woman between them.

At the blatant look of desire in his
friend’s—make that ex-friend’s—eyes, Ethan’s gut cramped and a
growl rumbled in his chest. But Finn stepped forward a little
before Ethan managed to clear the red haze shrouding his
vision.

Mike’s only reaction was an arched
eyebrow.

Ethan knew the question circling in his
friend’s mind and he couldn’t blame the guy for wondering. It
wasn’t unusual for a woman to move through the men in their circle.
But not this one. Kelly was different. “Always,” Ethan ground out
through clenched teeth.

Mike grinned. “Well, well, well. Let the fun
begin.” He swept his arm in the direction of the house. “Food and
drinks out back. Games wherever you look.”

“Food first, I think.” Finn urged Kelly
around Mike towards the front door.

“W-what was that about?” Kelly asked as they
climbed the stairs.

Ethan smiled at her and gave her hand a quick
squeeze. “Nothing. Mike’s a shit stirrer, that’s all.”

Kelly eyed him sceptically but didn’t
question him further. She held Ethan’s hand in an easy grip but
when they stepped into the house and came across the first game her
gentle hold became a stranglehold.

The Rose Garden by Susanna Kearsley
W Is for Wasted by Sue Grafton
Charles Manson Now by Marlin Marynick
Beautiful to Me. by G. V. Steitz
Fallen from Grace [Part Two of the Thicker than Blood Series] by Leighton, Olivia
Soldier on Her Doorstep by Soraya Lane
Holding Their Own: The Salt War by Joe Nobody
Filthy for the Night (For The Night #3) by C.J. Fallowfield
Take One by Karen Kingsbury
Lost at School by Ross W. Greene