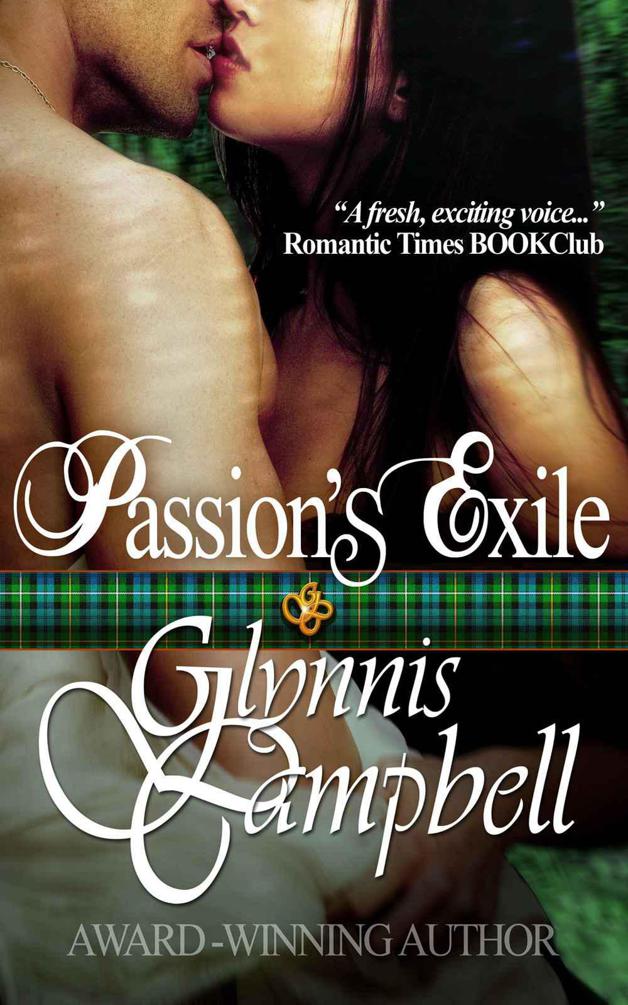 Table of Contents
A Taste of Danger…

“Kiss me!” Rose clapped her fingers over her mouth. She hadn’t meant to blurt it out like that. “That is, Sir Blade,” she said, “Would ye do me the honor o’ grantin’ me a kiss?”

She gulped. “I meant no offense,” she whispered. “‘Tis only that I’ve never had a kiss, not a proper one.”

Blade’s voice was a low growl. ” Do ye expect a disgraced felon to give ye a
proper
kiss?”

His words dizzied her. But Rose wasn’t afraid. He wouldn’t hurt her. She
knew
he wouldn’t. “Aye.”

The hands that seized her jaw weren’t gentle. They were demanding. His harsh stubble scraped across her cheek without a care for her delicate skin. And his mouth… His mouth consumed her like liquid fire.

But she didn’t want to.

This work is a work of fiction. Names, places, characters and incidents are the product of the author’s imagination or are used fictitiously. Any resemblance to actual events, locales or persons, living or dead, is coincidental.

All rights reserved. No part of this book may be reproduced in any form or by any electronic or mechanical means, including information storage and retrieval systems, without permission in writing from the author, except by a reviewer who may quote brief passages in a review.

For my brother Brenn,
who sometimes deems himself unworthy,
but is always welcome home.
Thank you for Sancho and Pancho,
Trolly and Wishvicky,
Sewers Beer, pine-needle forts,
and wacky radio dramas,
and remember, I am co-captain of the team.
Did you say it? Did you say it?
(Maniacal laughter)

Thanks to
Olivia Hussey and Viggo Mortensen
and the kids from
The Highly Gifted Magnet
of North Hollywood,
in particular,
Thomas Hanff, Bryan Haut,
Byron Miller, and Daniel Souleles,
who were endlessly amusing and inspiring
and are herein immortalized.

R
osamund tickled the downy feathers of her falcon’s throat, cooing softly to the bird. Wink’s talons gripped her leather glove, and the falcon cocked its head, studying her mistress’s curving lips with its one good eye.

“Such a bonnie lass,” Rose purred, bobbing her arm to make Wink spread her splendid wings.

The falcon might be maimed, but to Rose, Wink was the most beautiful bird in her mother’s mews. Rose’s gaze roamed over the others—hooded gyrfalcons and tiercels and merlins caught in the wild, now leashed to their perches—and she furrowed her brow at the subtle reminder of her own imminent capture.

“‘Twon’t be so bad, Wink,” she said, trying to convince herself as well as the bird. She swept her long sable hair back over her shoulder and smoothed the falcon’s wings into place. “I’m sure Sir Gawter will provide a fine, warm mews for ye.” And, she silently added—her brow creasing with displeasure—a fine, warm bed for
her
.

She’d met Sir Gawter of Greymoor a fortnight ago. He’d been a homecoming surprise from Lady Agatha, Rose’s mother.

Because Rose had been sent away from Averlaigh at the age of seven to be fostered at faraway Fernie House for the last eleven years, she hardly remembered her mother. She definitely didn’t recall having a betrothed. The news had come as a nasty shock—for her
and
for Wink.

The falcon had taken instant exception when Sir Gawter tried to kiss Rose’s cheek in greeting, screeching and swooping at the man’s head.

True, Rose
had
been slow to call off her bird. But ‘twas only because she’d been so astonished by the kiss. Naturally, she was punished for the insult, forbidden to fly her bird.

It hadn’t stopped her, of course. She’d simply removed the bells from Wink’s jesses and been more secretive about her daily escapes into the countryside to exercise her pet.

But ever since, Rose had counted the weeks to her impending marriage with growing dread, as if she awaited her execution.

‘Twasn’t that Sir Gawter was abhorrent. He was young and tall and rather comely. He had lively blue eyes, a boyish dimple, and a fringe of golden curls. He was gallant, well-spoken, and clever. He could wield a sword and play the lute with equal agility. And he extended favors and flattery with a generous hand.

But Rose felt nothing when she was around him, other than a vague and nagging sense of doom.

Rose blew gently upon the bird’s breast, riffling her feathers. “I wish I were a falcon,” she sighed. “
Ye’ve
no use for a silly husband, have ye? All ye need are the open sky and the wind under your wings.”

She glanced again around the moldering mews—at the gaps between the battered timbers and the feathers thickly littering the ground. Rose’s stepfather had done nothing to keep the place up, and now that he lay dying, the decrepit pile of stones would become Sir Gawter’s when they wed.

Rose couldn’t imagine why he’d want it. The manor was in ruins. Riding up to Averlaigh for the first time since she was a small child, she’d experienced a pang of disappointment.

Compared to her home at Fernie House, which—though not lavishly appointed—was at least tidy and well-kept, Averlaigh looked like a withering old crone. The plaster walls of the great room were chipped and stained with char. Mice crept through the moldy rushes in the hall’s corners and pattered across Rose’s chamber floor at night. An odor of faint decay hung in the air within the stone walls, and outside, the once resplendent gardens were overgrown with thistles.

Rose’s mother, however, seemed to have suffered no such wear. The manor might crumble apart, but Lady Agatha was careful to keep her own appearance untouched by age.

Like Rose, her complexion was the color of fresh cream, her eyes an enigmatic blend of gold and brown and green, her hair glossy black. Lady Agatha took great pains to rouge her cheeks and lips, to perfume her skin, and to keep her sumptuous garments in perfect repair.

Rose couldn’t be bothered with such nonsense. She could hardly sit still to have her hair plaited, and she had no patience for the endless lacing it took to get her into her layered gowns of silk and brocade. The moment she awoke, splashed water on her face, and tossed on a kirtle, she was ready to fetch Wink for a walk through the hills or saddle a palfrey for a morning gallop.

Indeed, this morn she’d cast aside the gown of amber damask embroidered with threads of gold that the maid had laid out for her, choosing instead a sturdy kirtle of blue frieze. There was no need to fret if the hem grew soiled from the mews or the garden or the heather-cloaked knolls.

“Well, bonnie Wink, let’s see what Apollo can find for your supper today.”

Wink tipped her head and fluffed up her feathers, as if she understood.

Because Wink couldn’t hunt for herself, she needed to rely upon skilled gyrfalcons like Apollo to bring down prey for her. But that was Wink’s only concession to her impaired vision. The little falcon, as willful and impetuous as Rose herself, careened fearlessly through the sky, unconcerned with the consequences of such blind and reckless flight.

Within a short time, Apollo managed to catch a sparrow for Wink and a young rabbit for himself. Rose let the birds gorge, and by the time she returned Apollo to the mews, ‘twas almost time for her own supper.

She tarried on her way to the great hall, in no hurry to sup with her betrothed. Seeing Sir Gawter only reminded her that very soon he intended to share not only meals, but a bed, children, and the rest of their lives together.

With Wink upon her glove, she ambled past the dog kennels, pausing to scratch the ears of the oldest flea-bitten hound, and pulled a thistle as she crossed the courtyard. She peered up at the ragged blue pennon fluttering from the half-collapsed tower and nodded to a maid drawing water from the well. She kicked a stray pebble through the grass until it rolled against the stone wall of the garden.

A horse whickered softly from the stables nearby. Rose slid her gaze toward the lowering sun and the long-shadowed hills in the west. There was just enough time left to visit the horses and settle Wink in her bedchamber before supper.

The groom was gone, but Rose knew which palfreys were tame and which would bite. As she crept into the hay-sweet warmth of the stable, slivers of sunlight pierced through the cracks between the timbers in long golden spears, illuminating airborne dust and bits of straw. The dun-colored gelding stamped his hoof, and the russet mare chomped noisily on a mouthful of hay.

A curious rustling of straw at the back of the stable made Rose’s ears perk up. She stopped in her tracks. Silence.

Then it came again. She frowned. Rats, most likely.

But as she took one silent step forward, the rustling took on a rhythmic pattern. This time she thought she heard whispers. People.

A Cold Day In Mosul by Isaac Hooke
The Yggyssey by Daniel Pinkwater
Bring on the Rain by Eve Asbury
Angel by Katie Price
Sup with the Devil by Hamilton, Barbara
Lake Justice by Devon Ellington
Shades of Gray by Spradling, Carol A.
Mickey & Me by Dan Gutman
The Fear by Higson, Charlie
Prince of the Icemark by Stuart Hill