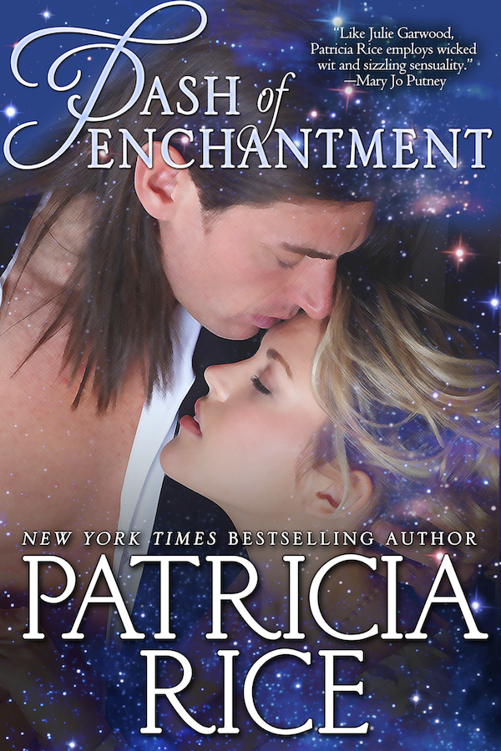 Soaring marble columns bearing gilded sculptures carried
the gaze upward to an arched ceiling accented with carved moldings bearing the
certain stamp of Robert Adam. Beneath the canopy of tinkling crystal chandeliers
and between the brocade-and-velvet-covered walls milled a procession of soberly
black-clad gentlemen and extravagantly arrayed ladies in the silks and flounces
of the current Season.

Despite the hubbub of orchestra and hundreds of people
speaking at once, none of the distinguished guests raised their voices above a
civil level. They circulated with well-trained precision, balancing punch cups,
napkins, fans, dance cards, and other necessities.

The couples in the center of the gleaming waxed ballroom
swayed with stately grace to an old tune, not the rackety waltz the Regent had
accepted at court two years before. Harmony prevailed among sedately wigged
musicians and modishly styled dancers alike.

Only a few noble guests blinked at the rash whirlwind bursting
from behind an elaborate sculpture of a draped Diana. Their serenity was only
disturbed when the young lady dashed headlong through the center of the crowd.

The dancers gasped in surprise and hastily parted. They
waved their fans and raised their quizzing glances at a glorious mass of
sunset-gold hair flying past their noses. A tall, exquisite figure, garbed in
daring primrose, she vanished through the doorway before any could correct her
behavior.

Cassandra! They shook their heads, whispered behind their
hands, and returned to their peaceful occupations.

The fleeing girl exploded into the mass of still-arriving
guests. With their top hats and fur-trimmed pelisses discarded, the latecomers
lingered to greet old friends and smile at new acquaintances.

Black swallowtail coats and silk breeches swung in
startlement as the fiery explosion catapulted past. The men stifled admiring
looks as their feminine companions frowned with disapproval.

At the door, a tall striking gentleman had halted to help
his lady adjust her yards of Kashmir shawl. His stern features held no
expression as he listened to his petite companion’s comments. The lady herself
was little more than plain, but she carried her looks with the arrogance of
wealth and nobility. Even a stranger would know she was someone of consequence,
at least to herself.

When the spectacular trail of fiery beauty crashed to a
breathless halt—grabbing the gentleman’s arm to stop her headlong flight—both
gentleman and lady stared in confusion and surprise.

“Wyatt! Thank goodness! You have to help me. Tell him you’ve
already claimed my next set. I’ll escape somehow afterward, but he’s right
behind me. Dash it all, Wyatt, don’t stand there like a looby! Look pleased to
see me. He’ll never believe you elsewise.”

The tall gentleman looked even more confused. Not
unintelligent, nor inexperienced in what society required of a gentleman, he
gallantly covered her gloved fingers. “I do beg your pardon, miss. Are we
acquainted?”

“Wyatt! It is Cassandra! Have you completely lost your wits?”

The short lady on his other arm hissed and tugged in a
futile attempt to free him, but he resisted.

“Cassandra! By Jove, little Cassandra?” In bemusement, he
studied the outrageous sun goddess clinging to his arm. “It’s been how long?
You weren’t above—”

The goddess’s less-than-heavenly answer rudely cut him off. “Since
last Wednesday. I promised you this set then. Smile, curse you, Merrick! Do not
play the prim and proper with me now.” Her gloriously lovely smile spread
across her face. None watching from a distance would believe the biting tones
with which she addressed him.

“Lady Cassandra, there you are! I have been searching this
age for you. Lord Eddings said I might have this dance.” A slender gentleman
sartorially correct in tight black silk breeches and white satin waistcoat—but
heavily festooned with more gold than the ceiling—bowed in front of them.

Although immaculately turned out, his features bore evidence
of dissipation, and the glass in his hand smelled of spirits stronger than
punch.

Cassandra turned a blazing smile of condolence upon the
newcomer. “Sir Rupert! What a pleasant surprise. I am so sorry, but this set is
taken by an old neighbor of ours. Wyatt, Catherine, are you acquainted with Sir
Rupert? Sir Rupert, these are my old friends, Lord Merrick and his fiancée.”

The earl barely disguised his disdain for the rake. “We’re
acquainted, my lady. I beg your pardon, but Lady Cassandra and I previously
arranged this set, Rupert. I was just taking Lady Catherine to a friend of
mine. Here he comes now.”

Over the heads of the crowd he signaled a blond gentleman of
muscular build who delightedly broke off in their direction.

Merrick could scarcely be indifferent to the angry intake of
breath on one arm and the joyful exhalation of relief on the other, but he
maintained his equanimity. Rupert appeared ready to protest, but the arrival of
Merrick’s friend intruded.

“Scheffing, if you will, the lady has requested a glass of
punch while Cass and I carry out this next set. Would you be so kind...?”

The weathered lines about the earl’s mouth deepened as he
guided his unexpected dance partner onto the floor. “You will explain what that
was all about?”

“That’s obvious, Wyatt,” she replied disparagingly. “Duncan
promised that libertine I would dance with him, and I took exception to it.
There simply wasn’t time to find my pelisse and summon a carriage. If you will
be so kind as to dance me to the far staircase when the music’s over, I shall
pretend to go to the powder room and make my escape. It’s quite generous of you
to rescue me. I always knew you were the kind of man of which white knights are
made.”

“That’s doing it a trifle too brown, my lady.” Aside from
the fact that there was a decade difference in their ages, and he was due the
respect of his rank, Merrick had not seen the chit in a half-dozen years. She
may have turned into a grand beauty, but her airy familiarity rankled. “Since
your brother is your guardian, you’re obliged to obey his wishes. And I cannot
remember giving you leave to call me by name, much less molest me in public
places. I require a more thorough explanation.”

Cassandra gave a great sigh and turned a pair of meltingly
blue eyes up to him. “You haven’t forgiven me for stealing your apples yet,
have you? I did not think you so petty.”

“The apples in question were the result of years of
experimentation lost to me because of your childish prank. There were only
three on the tree. You did not need pick all of them. That is not to the point.”

Cassandra simply smiled at Merrick’s complaint. “Any tree
that bears only three apples cannot be worth much. And there is always the next
year. Presumably it bore a great many more then. How did the experiment work
out?”

“The tree bore a great deal too many while I was away, and
the gardener failed to prune it adequately. The tree split in half and died.”

Cassandra laughed as he whirled her around in the pattern of
the dance and brought her back to him. “All those apples wasted! That’s a
terrible pity. Now, had I been there, I would have taken enough that the tree
might be standing still. The Widow Jones always thought your apples were the
best in the county.”

“Is that what you did with them? I always thought there were
far too many missing for one little girl to eat. You could have told me who
they were for. I would gladly have helped you pick them. She always sent me the
most excellent pies.”

“Telling you wouldn’t have been nearly as much fun.”
Cassandra granted him a radiant smile.

Merrick merely raised an eyebrow at her lack of character.

She made a slight moue of resignation. “Besides, she died
that next year and we moved away.”

Pages of explanation could have disappeared into the gulf
created by that statement. Six years ago she had been a child pulling a foolish
prank on her neighbor, who happened to be a happily married man at the time.

A year later her home was gone and so was his wife, not to
mention the Widow Jones. A momentous year, indeed.

Wyatt carefully bridged the gap with a more innocuous topic.
“Where is your chaperone? If you mean to leave just to spite Rupert, she could
be fetching your carriage.”

Cassandra blithely waved away such niceties. “Do not concern
yourself, my
lord
.” She added a sharp
emphasis to his title, showing she acknowledged his earlier cut. “You have been
more than kind. Simply see me to the stairs, and I will fend for myself.”

It may have been six years since he had seen her last, but
Wyatt was beginning to remember the rash little brat. The awkward limbs and
skinny child’s frame might be replaced with creamy skin and a woman’s grace and
form, but he rather suspected her character had not undergone any such radical alteration.
None of the Howards were known for their retiring character or circumspect
behavior.

He frowned. “You surely do not mean to go home alone?”

Cassandra diverted the topic. “Have you and Lady Catherine
set the date yet? She and your friend Scheffing seem to be getting along quite
famously.”

Merrick followed the direction of her gaze. While he had
scarcely been able to elicit a smile from his fiancée during the entire length
of their courtship, Scheffing always managed to bring her to animation. Since
his friend had the wits of an overgrown puppy, he could only assume Catherine
responded to his friend’s blond good looks and store of gossip.

Well aware of his own lack of charm, Merrick returned his attention
to the slender female on his arm. Time had certainly wrought changes. Dragging
his gaze from full young breasts barely concealed by silk, Merrick gave her a
shrewd look.

“Catherine and Bertie are old friends, as surely you must remember.
You have not been away from Kent so long that you have forgotten that. Where is
your brother? I think it might be best if I make myself known to him before you
spirit yourself off.”

“Honestly, must you treat me as a child too? Duncan is off
in the card room as usual. The set is almost ended, and Rupert is waiting by
the entrance. The stairs it must be. Hurry, please, my lord, before he guesses that
I am escaping.”

He had little choice in the matter, actually. She tugged his
arm as soon as the music ended, and without creating a battle in the midst of
this proper company, Wyatt could do naught but follow her to the stairs in the
anteroom at the far side of the ballroom from the entrance.

“I am much obliged my lord.” Cassandra curtsied prettily as
she gained the bottom steps. Then, without warning, she leaned from her perch
to place a quick peck on his cheek. “Cathy doesn’t deserve you,” she whispered
wickedly before fleeing up the stairway and out of sight.

Shocked at this unexpected tribute, Merrick hesitated like
some inexperienced schoolboy besottedly staring after his first love.
Recovering his senses, he swung around wearing his usual indifferent
expression.

Beyond any question of a doubt he knew what the little minx
meant to do, and as neighbor and gentleman, he could not let her do it.

He could search out the new Lord Eddings and confront him
with his sister’s waywardness, but he knew Duncan Howard of old. The man had as
few scruples as Rupert, or less. Only a father as insane as the late marquess
could have left an innocent young female in the guardianship of Duncan Howard.
Provided Cassandra Howard could be termed an innocent.