Read Penguin History of the United States of America Online

Penguin History of the United States of America 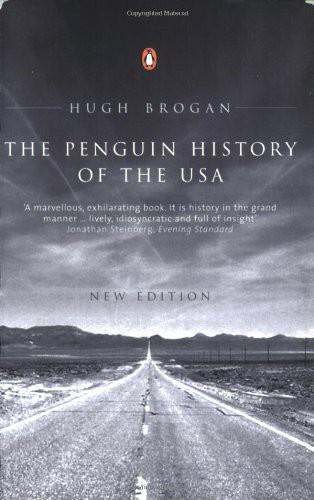 THE PENGUIN HISTORY OF THE UNITED STATES OF AMERICA

Hugh Brogan was educated at Repton School and Cambridge. He worked on the
Economist
for two years before his first visit to the United States as a Harkness Fellow in 1962. He was a Fellow of St John’s College, Cambridge, for the period 1963–74 and thereafter, until his retirement in 1998, taught at the University of Essex (he was R. A. Butler Professor of History for the period 1994–8). His works include a study of Alexis de Tocqueville,
Tocqueville
(1973),
The Life of Arthur Ransome
(1984),
Mowgli’s Sons: Kipling and Baden-Powell’s Scouts
(1987) and
Kennedy
(1996). His most recent work is
Signalling from Mars: Selected Letters of Arthur Ransome
(1997).

The Penguin History of the United States of America

Except in the United States of America, this book is sold
subject to the condition that it shall not, by way of trade or omerwise, be lent,
re-sold, hired out, or otherwise circulated without the publisher’s prior
consent in any form of binding or cover other than that in which it is published and
without a similar condition including this condition being imposed on the subsequent
purchaser

A Note of Thanks

Note for the Revised Edition

BOOK ONE
:
The Settlement

2   The Roots of English Colonization

BOOK TWO
:
The Old Order and the American Revolution

BOOK THREE
:
The Age of Equality

BOOK FOUR
:
The Age of Gold

A Note on Further Reading

1   The United States of America

2   The Indians and the Anglo-Americans

5   The principal battles of the Civil War

A Note of Thanks

This book has been fifteen years in the making – rather more, if the time taken for printing it is allowed for – and so my first thanks must be to my publishers, who have shown exemplary patience (they were expecting something much shorter, much sooner). Next I must thank my two academic homes, St John’s College, Cambridge, and the University of Essex, not only for paying my salary but for providing excellent conditions for the pursuit of learning. One of the great advantages of belonging to such institutions is that at points of difficulty you can always turn to a colleague for reliable advice; an invaluable circumstance.

In so long a period, during which I have tried to master so enormous a subject as the history of the United States (I may say I grew rather weary of being told what an easy job I had, since America was so new a country), almost everything I have done or learned seems to have contributed to the making of my book; and I have benefited directly from innumerable conversations with learned and sharp-minded historians, both British and American. It would seem to claim too much if I were to name them all here: I hope I am not a name-dropper. Better to say, in general terms, that I have profited hugely from many lectures, seminars, classes, articles, monographs and stray encounters which, though uncited, have helped to strengthen this history in innumerable ways. I have learned a lot from my pupils, both through discovering what they really needed to know and (when they asked me questions I couldn’t answer, or, in their essays, included information or references that were new to me) where my own ignorance lay. I have also benefited from various visits to the United States, from discoveries in academic libraries there, and from opportunities to get to know the various regions of that immense country. So I ought also to name the University of Chicago, Lewis and Clark College (Portland, Oregon), the University of Washington (Seattle) and the University of Tennessee, all of which greatly assisted my studies and my understanding of America, in return, at most, for a little summer teaching. And I must name the men who got me to the places: John Hope Franklin, Don Balmer, Dwight Robinson and
Milton Klein, my good friends. I am also well aware of how much this book owes to the two years which I spent as a Harkness Fellow at the Brookings Institution and at Yale between 1962 and 1964. Last but not least, indeed above all, I and my book are immeasurably indebted to my father, the late Denis Brogan. It will soon be ten years since he died, but the longer I live the more I am aware of how much I owe him; in particular I know that it was he who made me an Americanist, and he who taught me all the most important things I needed to learn about the United States. I wish he could have lived to see this result of his teaching (if only because he would have told me very frankly where it fell short); his memory and example have been with me ceaselessly as I worked at it.

Various people at various times read all or part of my drafts, and whether by correction or encouragement helped me along. I end this note by naming them with all gratitude: J. R. Pole, H. C. Porter, A. F. Rowlands, Rupert Sheldrake, Jill Steinberg, Howard Temperley, Hugh Tulloch, Alexander Tusa, Fiona Venn and Stuart Woolf.

Note for the Secound Impression

I am most grateful to the reviewers and correspondents who have enabled me gradually to correct various errors that disfigured the first edition of this history.

Note for the Revised Edition

History does not stand still, as I was well aware when this book was first published in 1985, but neither I nor anybody else foresaw what radical changes it would bring forth in the next few years. The end of the Cold War was a gigantic series of events, the consequences of which are still making themselves felt; we must therefore wait for anything like a full understanding of its importance. But today, a full decade after the Soviet Union and its empire began to break up, it is none too soon to add to my chronicle a chapter recounting the last years of the Cold War, and to revise earlier chapters in the light of our new knowledge. To push the tale further, into the 1990s, would be possible but not really useful: the pattern underlying events is not yet clear, and in a book of this kind the pattern is what matters. So my narrative now goes down to the retirement of Ronald Reagan but (except incidentally) no further.

I have maintained my division of American history into five main epochs,
but have changed the label attached to the last: once called ‘The New World’, it is now called ‘The Superpower’. This reflects my conviction that the central theme of world history in the twentieth century, for good and evil, has been the emergence of the United States as a power and civilization that surpasses, in its reach and strength, all empires of the past, and that those who begin their analyses at other points – with the Russian Revolution, say, or the collapse of the old colonial empires – are profoundly mistaken.

The torrent of research into all aspects of American history has continued to flow throughout the past fourteen years, and the fashionable pre-eminence of social history (in the broadest sense) has been constantly reaffirmed. This makes less difference to the study of American history than might be supposed: as I hope is clear from what follows, the history of the United States has always been primarily the history of a society. But in this revised edition I have tried to take account of the most important discoveries and fresh hypotheses. And I continue to be grateful to the readers who have written to me with comments, criticisms, corrections and suggestions: I have taken careful note of all that they have said, and revised my text in many places as a result. I also wish to acknowledge help from Virginia Sapiro and Graham K. Wilson; Louis Claiborne; Tim Hatton; Ken Plummer and Tony Badger.

I have also revised the dedication, but in its new form it is still meant to express my thanks to all those students, at Essex, Cambridge and elsewhere, for whom this book was written, who over the years have taught me so much (perhaps at least as much as I have taught them) and who, from first to last, have made my professional involvement with American history so enjoyable.

We are indebted to author’s agents on behalf of The National Trust for permission to reproduce extracts from ‘Captains Courageous’ and ‘The White Man’s Burden’ both from
The Definitive Edition of Rudyard Kipling’s Verse
published by Hodder & Stoughton.

The Legend of Alexandros: Belen by Mr. A. C. Hernandez
The Secret of Rover by Rachel Wildavsky
Serial Killers: Confessions of a Cannibal by Robert Keller
Man Seeks Woman 2, Man Seeks Wife by Stephanie Franklin
Clash of Star-Kings by Avram Davidson
The Coniston Case by Rebecca Tope
Criminal That I Am by Jennifer Ridha
The Adept by Katherine Kurtz, Deborah Turner Harris
The Fallen One by Kathryn le Veque
His Royal Pleasure by Leanne Banks