Read People of the Mist Online

People of the Mist 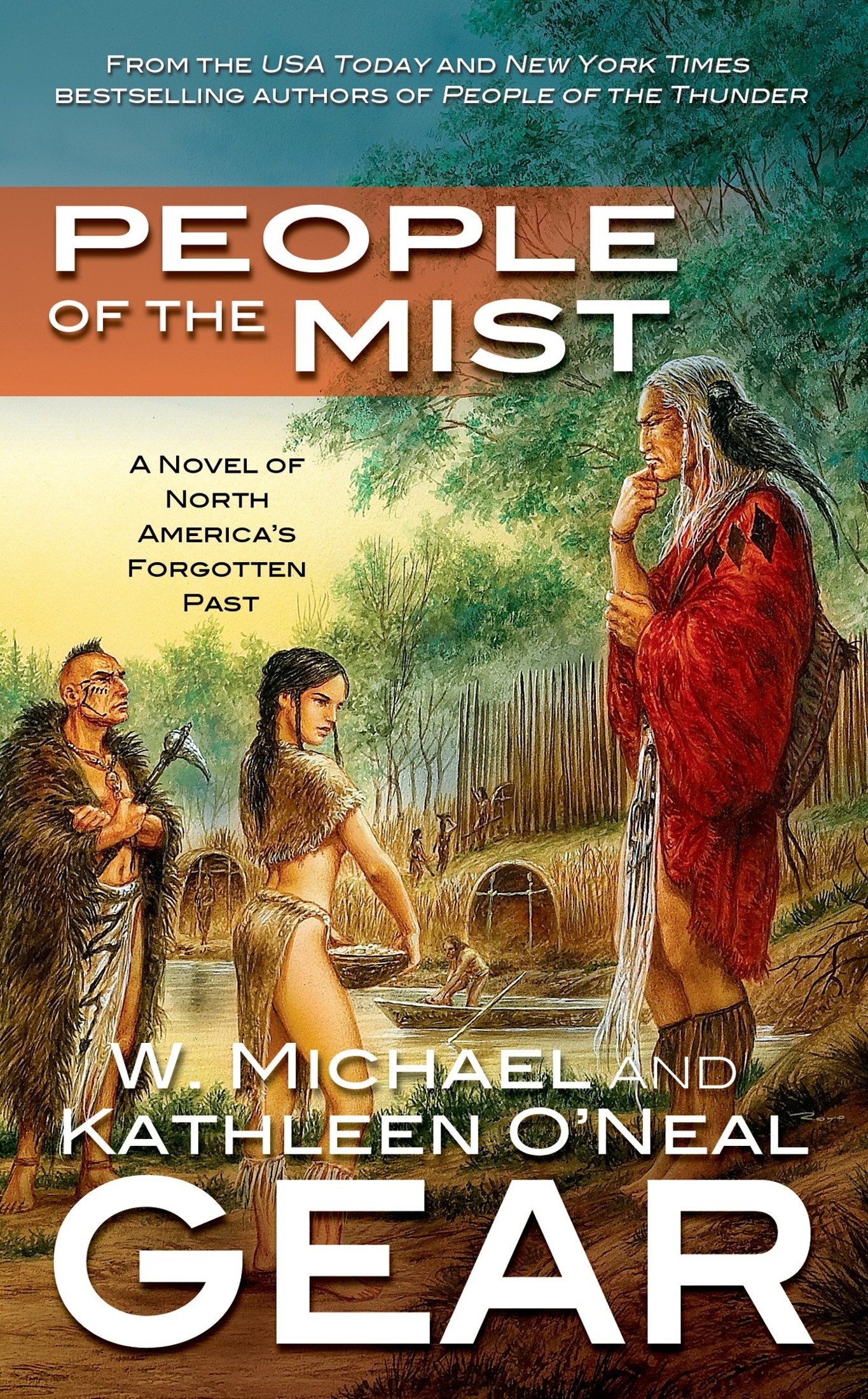 PEOPLE OF THE
MIST

People
of the Wolf

People
of the Sea People of the Lakes ‘

People
of the Lightning People of the Silence

People
of the Mist People of the Masks the anasazi mysteries

Sand
in the Wind This Widowed Land by W. Michael Gear

NOTE:
If you purchased this book without a cover you should be aware that this book
is stolen property. It was reported as “unsold and destroyed” to the publisher,
and neither the author nor the publisher has received any payment for this
“stripped book.”

This
is a work of fiction. All the characters and events portrayed in this book are
either products of the author’s imagination or are used fictitiously.

PEOPLE
OF THE MIST

All
rights reserved, including the right to reproduce this book, or portions
thereof, in any form.

Tor
is a registered trademark of Tom Doherty Associates, LLC.

Printed
in the
United States of America

Friends,
through the dark and, we hope, into the Light to come.

Note:
maps and time line have been omitted, because they cannot be intelligibly
rendered in this scanned version of the book.

People
of the Mist and the other books in the prehistory series would not have been
possible without the thoughtful encouragement of Tom Doherty, Linda Quinton,
and the rest of the Tor/Forge staff. They have stood behind the project during
the years, and to them we Owe the deepest gratitude.

Harriet
McDougal, our longtime editor, deserves special recognition for her constant
encouragement and understanding. When we can’t see the forest for the trees,
she is our chainsaw. Thanks, Harriet, we know how lucky we are to have you.
Lucia St Clair Robson, author of Mary’s Land, offered us her house as a base of
operations during our research on the
Chesapeake
area. Lucia, thanks for everything,
including your warm hospitality—and most especially for the Rollerblade
experience. Thanks, too, to Ray Williamson and Carol Carnett for the valuable
discussions on archaeoastronomy.

As
always, Harold and Sylvia Fenn, Rob Howard, and the rest of the special people
at H. B. Fenn deserve the warm thanks we send them.

There Is a Shadow

For
the prehistoric occupants of the American mid Atlantic coast, the
Chesapeake Bay
was a paradise. The rich estuary’s
environment and temperate climate provided everything the people needed for
survival. Yearly migrations of waterfowl and anadromous fish provided a wealth
of seasonal food resources. The forest provided nut harvests, and a habitat for
turkey, deer, bear, raccoons, and other animals. From the marshes, the people
collected cord grass wild rice, muskrats, arrow arum root for tuckahoe bread,
and other foods. On shallow mud flats they caught crabs, dug clams, and
harvested oysters. Deposits of silty loam soil grew corn, beans, squash,
tobacco, and sunflowers, among other agricultural staples.. In such a land of
plenty, only the miracle of applied English obstinacy and ethnocentrism could
have led to starvation in the
Jamestown
colony in 1608.

Today,
the
Chesapeake
is still noted for the wealth of its
resources, its natural beauty, the yearly migration of waterfowl, oysters,
crabs, agriculture, and, oddly enough, when one travels a short distance up the
Potomac
, politics.

Not
much has changed since the days of the Late Woodland period. Then, as today,
the chiefs demanded, and were paid, tribute.

People
of the Mist is set during the period archaeologists call Late Woodland II; the
date is around 1300 a.d. This was a period of cultural change for the
Algonquian peoples of the coastal plain east of the fall line. At least three separate
archaeological complexes are present during this transition to larger villages
and incipient chieftainships. For the purposes of the novel we have identified
three ethnic associations: the Upriver villages (
Montgomery
complex); the Conoy (Potomac Creek
complex); the Independent villages and the Mamanatowick’s villages (
Rappahannock
complex). Interested readers are referred
to Stephen B. Potter’s Commoners, Tribute, and Chiefs: The Development of
Algonquian Culture in the
Potomac
Valley
for an irf-depth account of the
archaeological evidence.

Culturally,
these people shared many subsistence patterns, relying on fishing, collecting
and gathering, hunting, and agriculture. Archaeologists separate them by their
pottery styles, burial practices, and house shapes. All three groups traded
inland for tool stone, copper, and luxury items. These goods traveled east-west
along the
Potomac
watershed, as well as north-south up the
Chesapeake
to the
Susquehanna River
, and down the piedmont to the
Carolinas
. To defeat the vicious clouds of
mosquitoes, they greased their bodies; and, while later Europeans would
complain about their smoky houses, the blue haze allowed them to sleep in
peace.

Historically
and ethnographically, we know that these Algonquians, unlike their northern
kin, were matrilineal-tracing descent and inheritance through the mother. Women
owned the houses, fields, and children, and, as is common among such peoples,
women enjoyed considerable latitude in their sexual relationships. The division
of labor and responsibility was well defined between genders. Most notably, men
hunted, fished, attended to construction, and made war, while women employed
themselves in agriculture, food preparation, child rearing, and clan
administration.

From
the archaeological record, we know that villages were expanding at this time,
and palisades were being erected. People do not build fortifications for fun;
it is hard, time-consuming work. At the same time, many long houses were still
located outside the palisades, indicating that while warfare was endemic, it
wasn’t overwhelming. We have attempted to reflect these oscillating inter
village relationships.

Within
two hundred years, Europeans would arrive in the
Chesapeake Bay
and change the lives of the Native peoples
forever. The
Rappahannock
complex would evolve into the Powhatan
chieftainship of John Smith and Pocahontas fame: the Conoy would interact with
Lord Calvert’s Catholic settlement in
Maryland
. Within the next one hundred years, ninety
percent of the native population would be dead and the cultures decimated.
Today we have only the biased writings of the first European colonists, and the
very fragile archaeological record, to allow us to glimpse what life was like
on the Chesapeake before the first European ship sailed into that most
remarkable of estuaries.

We
can only imagine what The Panther would say if he could see it today.

Jesus Lied - He Was Only Human: Debunking the New Testament by CJ Werleman
Just Deserts by Bailey, Elizabeth
Mrs. Malory and Any Man's Death by Holt, Hazel
Human Cargo by Caroline Moorehead
Past Lives by Chartier, Shana
Dress Her in Indigo by John D. MacDonald
Pages for You by Sylvia Brownrigg
The Murder Channel by John Philpin
Dragon Rising by Rush, Jaime
Pursued by Shadows by Medora Sale