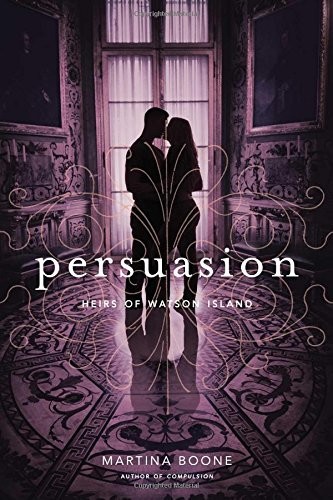 “Boone’s Southern Gothic certainly delivers a compelling mystery about feuding families and buried secrets, not to mention a steamy romance.”

“Skillfully blends rich magic and folklore with adventure, sweeping romance, and hidden treasure . . . An impressive start to the Heirs of Watson Island series.”

“Eight Beaufort is so swoon-worthy that it’s ridiculous. Move over, Four, Eight is here to stay!”

“Even the villains and not-likable characters were just so engrossing. I have to say I’ve already put the sequel on my TBR shelf.”

“Darkly romantic and steeped in Southern Gothic charm, you’ll be
compelled
to get lost in the Heirs of Watson Island series.”

“The perfect Southern family saga, charming and steamy on the surface, with cold-blooded secrets buried down deep. What more do you want? More time to read it, that’s what.”

—
Kendare Blake, author of
Anna Dressed in Blood
and
Antigoddess

“A shivery, delicious Southern Gothic with feuding families, dark spirits, ancient curses . . . and caught up in the middle, a young girl learning to live and love for the first time. Atmospheric and suspenseful,
Compulsion
will draw you in and hold you until the very last page.”

“A star-crossed romance, lush Gothic plantations, and an island full of intrigue
—Compulsion
was a heart-pounding race to the finish! A thrilling debut!”

“A fresh twist on the Southern Gothic—haunting, atmospheric, and absorbing.”

—
Claudia Gray,
New York Times
bestselling author of
A Thousand Pieces of You
and the Evernight and Spellcaster series

“A stunningly magical debut with a delicious slow burn to be savored. I want to live in this story world!”

“Beautifully written, with vivid characters, a generations-old feud, and romance that leaps off the page, this Southern ghost story left me lingering over every word, and yet wanting to race to the compelling finish.
Compulsion
is not to be missed.”

“Ancient spirits, mystery, and Southern charm
—Compulsion
mixes dark magic with darker family secrets in a way that’ll make you relieved there are two more books. I can’t wait to continue reading about Barrie and the rest of Watson Island!”

—Kat Zhang, author of
What’s Left of Me

Find out about free book giveaways, exclusive content, and amazing sweepstakes! Plus get updates on your favorite books, authors, and more when you join the Simon & Schuster Teen mailing list.

or visit us online to sign up at
eBookNews.SimonandSchuster.com/teen

For all those who suffer from PTSD, and for the victims of violence, persecution, and marginalization all around the world. For anyone who has been “persuaded” against their will.

May the world become a kinder, safer place.

The last miles of the journey stretched eternally, and Watson’s Landing pulled more and more on Barrie’s finding gift. The ache at her temples had never been absent since she and Eight and Seven Beaufort had flown out to San Francisco to retrieve her godfather’s ashes. Now the pain swelled to a pounding pressure.

Seven turned the Jaguar off the bridge from the mainland onto Watson Island. Slitting her eyes, Barrie tried to avoid the afternoon sun slanting through the oaks that shadowed the road along the water’s edge. The blackwater Santisto River surrounded three sides of the island, but the Atlantic Ocean on the Eastern side added a familiar tang of salt to the tannin-scented air and made her more eager still. A few miles later, the car clattered across the smaller wooden bridge
spanning the creek that separated the Watson property from the other half of the island, and a historical marker stood at the edge of the high wall that skirted the rice plantation Barrie’s family had owned since 1692. Beyond the bricks lay the Watson woods, with the Fire Carrier’s Scalping Tree at their heart. The thought both drew Barrie and repelled her.

“There, you see? Almost home.” From the backseat behind her, Eight reached over and lightly touched Barrie’s shoulder. “You’ll feel better in a second, Bear.”

Barrie smiled absently in the passenger seat, tightening her grip on the boxed urn she held in her lap. She braced herself as Seven swung into the driveway. The car stopped in front of the wrought-iron gate decorated with its ornate gold
W
and swirling hearts.

Perceptions were fickle things, as formless as smoke and just as dangerous. Weeks ago, when Barrie had first seen the plantation her mother had run away from in her teens, the light clawing through the haunts of Spanish moss along the avenue of ancient oaks had seemed ominous, and the down-at-the-heels mansion beyond the trees had appeared forbidding.

So much had changed since then. The things Barrie had considered “safe” at first had tried to kill her, and the spirits and the landscape that had frightened her initially were part of what she’d missed the most these past four days.

Leaning forward, she waited for the gate to open. It occurred to her only as the sticky heat blasted into the car from Seven’s lowered window that the entrance shouldn’t have been shut at all—not on a Sunday afternoon in tourist season. Trying and failing to tamp down a twinge of panic, she turned to Seven, who had reached out to press the intercom button set into the thick brick pillar.

“Why is the gate closed?” Barrie asked.

Seven didn’t answer, and in the backseat, fabric rustled across the leather as Eight shifted and slid his eyes away. Not that their evasions delayed the truth for long.

The Watson gift for finding lost things had continued to grow stronger since Barrie’s mother’s death. A tug of pressure pulled her toward the answer, which was hidden from view by Seven’s shoulder. Craning her head around him, she discovered that someone had taped a sheet of yellow paper over the plaque on the gatepost:

closed to the public

“All right, what’s going on?” Fighting to keep her voice level, Barrie skewered Eight with a glare. “What happened? Did Pru hurt herself? Where is she?”

Barrie looked from one to the other, but it was Seven who had spent the most time on the phone with Pru. “Out with it,” Barrie commanded. “What are you hiding?”

In the rearview mirror, Eight and Seven flicked each other looks that acknowledged guilt.

“There’s been a bit of trouble with reporters and ghost hunters since the story broke about the explosion,” Seven hastened to say. “Nothing to worry about. Pru and I decided it was better to close up in an abundance of caution.”

Seven’s face smoothed into the typical Beaufort
for your own good
expression that drove Barrie nuts. He jabbed the intercom button again, and Barrie aimed an expectant and disapproving eyebrow in Eight’s direction.

A hint of red spilled across Eight’s cheeks. “Come on, Bear. You were already dealing with packing up the rest of your mother’s things.” Losing his usual confident calm, he waved a hand toward the box on Barrie’s lap. “Not to mention Mark.”

Grief didn’t make Barrie fragile. She would have told Eight that, but the intercom crackled, and her aunt’s voice came across the wireless system.

Seven’s expression softened as it did whenever he spoke to Pru. “Just us,” he said.

“Well, thank God for that. Hold on, and I’ll buzz you through.”

It was so good to hear the honey-slow pace of her aunt’s South Carolina drawl that Barrie’s train of thought evaporated briefly. But then the exchange only heightened her sense that the situation was worse than the Beauforts let on. Turning in her seat, she studied them. They were a matched set in their pastel oxford shirts, with their stubborn-jawed faces and their hair lightened by the sun.

She wasn’t sure which of them frustrated her more. They both had the infuriating bossiness that came with the Beaufort gift of knowing what people wanted and being compelled to give it to them. Seven even more so, as Barrie had discovered the past few days. But Eight? He was supposed to be on
her
side. He shouldn’t have kept things from her. Not about Watson’s Landing.

Technically, the plantation still belonged to Pru, but it was Barrie who was bound to the land by blood, magic, and inheritance. The house, the gardens, the woods where the Fire Carrier disappeared each night, and the spirits of the
yunwi
that the ancient witch kept corralled on the island with his nightly ceremony of fire on the river were all Barrie’s responsibility.

The word felt right as Barrie thought it. She
was
responsible. Because who else could be? Pru barely had the Watson gift at all; she had never been the true heir. As the younger twin, younger than Barrie’s mother, Lula, the gift had touched Pru only incidentally, and she couldn’t see the spirits or feel the land as strongly as Barrie did. And how was Barrie supposed to protect the
yunwi
or keep Watson’s Landing safe if no one let her know what was going on?

She had every intention of telling Eight exactly why he was wrong and what kind of betrayal it was to keep secrets from her, but before she could open her mouth to speak, he leaned closer with his uncanny green eyes intent on hers.

“You’re right, we should have told you,” he said, echoing her thoughts the way the Beaufort gift so often let him. “But what was the point of worrying you? You couldn’t do anything while we were away.”