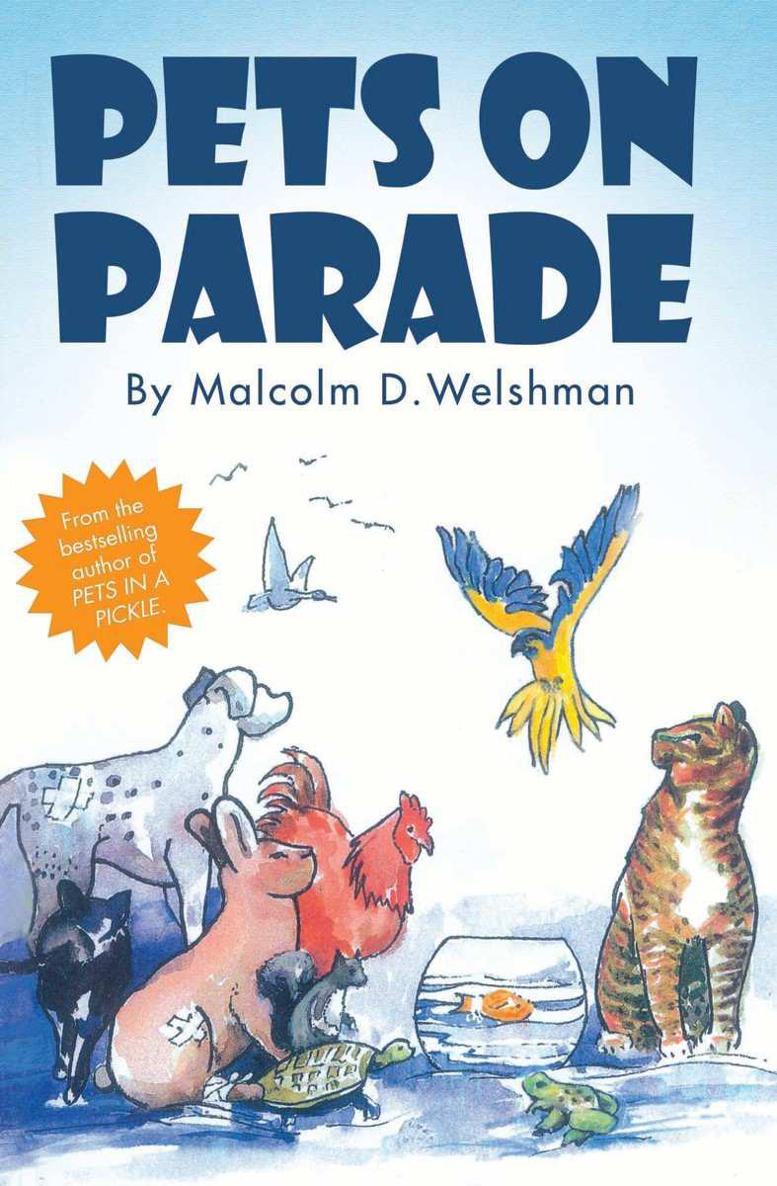 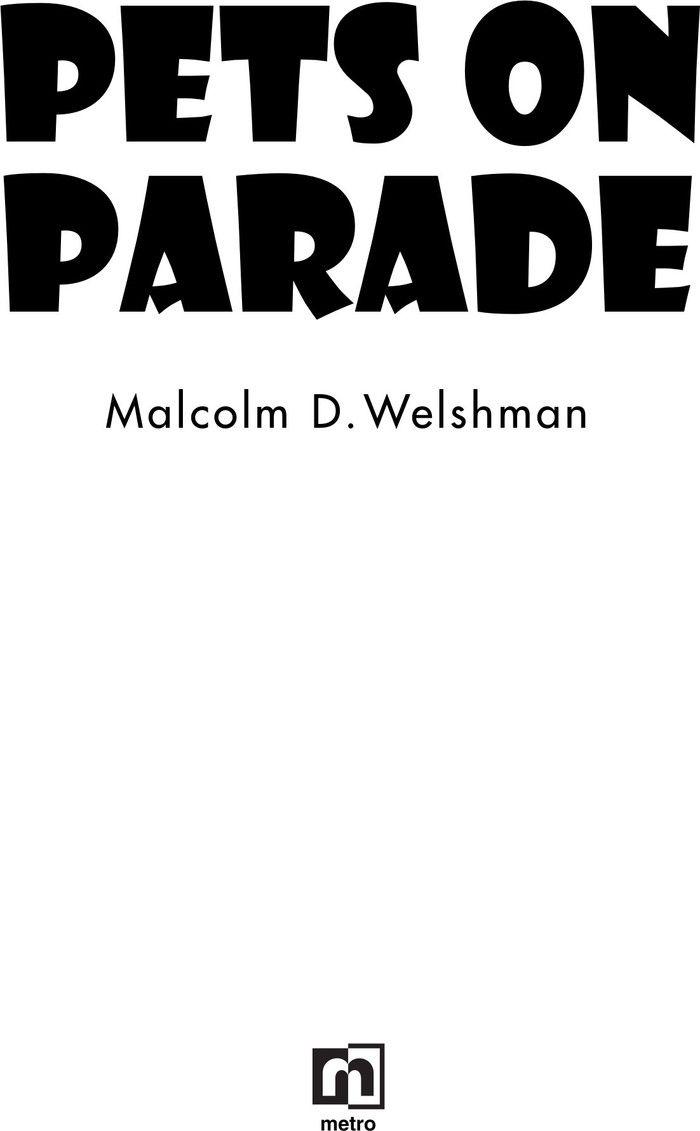 PRAISE FOR
PETS IN A PICKLE

‘It’s fun and should bring a smile to your face.’

‘Your story is a corker.’

‘I loved this book although I’ll never be able to look at my vet in the same way again.’

‘There are a host of colourful characters behaving badly in this warm, funny novel.’

‘This book is laugh a minute material…I have not laughed so much reading a book for a very long time.’

‘Not surprisingly, this book has topped the Amazon bestsellers list and looks set to become an animal lovers’ classic.’

Dogs in the News

‘This book is sure to be enjoyed by all animal lovers and those who enjoy human comedy.’

7 CLEAN? NOT BY A LONG SQUAWK

9 SHOW ME THE BUNNY!

10 RUNNING OUT OF TIME

11 NOTHING TO SNARL ABOUT

14 HAVING THE QUILL TO LIVE

W
hen Madam Mountjoy walked into my consulting room that January morning with a black cat sitting benignly on her shoulder, and stated he was the reincarnation of an Inca emperor, I knew it was going to be one of those days.

Mind you, the morning had already got off to an uncertain start – and that was entirely my fault. It stemmed from the fact that I’d sent a Christmas email to our receptionist, not dreaming she was then going to brood about it all over the festive period, and still allow it to rankle now that we were into the New Year. Dear, oh dear. Where was your sense of humour, Beryl?

It had been an Internet card of a jolly Father Christmas standing on a red-tiled roof next to a chimney, going ‘Ho, ho, ho’. Very seasonal, I thought. Very Christmassy. You clicked on the sack he was carrying over his shoulder and he suddenly became animated – he actually sprang over to the chimney pot. I expected him to pop down it. Wrong. He started to urinate down it instead. It tickled my juvenile sense of humour but it didn’t tickle our receptionist’s at Prospect House when I emailed it to her. I must admit I’d had an anxious moment when I clicked the ‘Send’ button, thinking perhaps Beryl might not see the funny side of it. Too right. She didn’t.

It was apparent the moment I bounded into reception, full of good cheer, a smile on my face, ready to greet her with a chirpy ‘Good morning’. That didn’t cut any ice with her. Oh, no. Her frosty expression and the Arctic glare from her good eye – the other, as usual, just gave out its customary artificial glint of glass – were enough to freeze my bonhomie as if I’d just plunged through a walrus’s blowhole.

My ‘Good morning, Beryl … how are things?’ instantly froze on my lips as I swiftly saw that ‘things’ were definitely not good.

Beryl pulled at the sleeve of the black cardigan draped, shawl-like, over her shoulders. It was an exaggerated gesture which spoke of a thousand grievances. But one was sufficient. ‘Why don’t you grow up, Paul? That email of yours wasn’t funny.’

Uh oh. Seems my peeing Santa had a lot to answer for.

Beryl had turned back to the computer and was tapping away at the keyboard, her long, red nails flying across the keys. ‘Which reminds me,’ she went on, her face remaining impassive as she spoke, ‘Mr Digby wants some more tablets. His Labrador’s bladder is playing up again.’

I was tempted to say, ‘Good job it wasn’t his reindeer’s …’ but thought better of it. After all, I wasn’t that much of a wit and, to judge from Beryl’s icy look, she already considered me half of one.

Having re-established a fragile line of communication with Beryl by way of Mr Digby’s bladder problems – an appointment to be made before further medication was prescribed – I breezed on down the corridor to do my usual ward round before starting morning consultations.

I met Mandy, our senior nurse, clip-clopping in her highly polished, black brogues up the corridor. As ever, I felt like jumping to one side and giving her a salute. She’d evoked that reaction in me ever since my initial run-in with her over the anaesthetic machine last June – when I was being interviewed for the post of assistant vet. A memory which actually still causes me to giggle (‘Oh, do grow up, Paul,’ my girlfriend would say), although, at the time, my squeaky giggling had been induced by the escape of nitrous oxide. As Mandy drew level, I tentatively raised my hand in a gesture of greeting while she sailed by accompanied by the crackle of her crisply starched uniform. A galleon at full stretch. Her prow plunging forward … well, at least her ample bosom was. Her head barely turned as my ‘Good morning’ was acknowledged with a brisk nod and a curt ‘Morning, Paul,’ before her keel turned to starboard and she disappeared into the dispensary. Blimey. What had got into her bulwarks? So much for New Year festive feelings. Here, in Prospect House, they seemed to be festering fast.

Mind you, things hadn’t been exactly a bed of roses back at Willow Wren first thing. My girlfriend, Lucy, the junior nurse at the practice, had had to get up ahead of me for the early shift and had been distinctly thorny.

‘Don’t know why you’re so cheerful,’ she muttered in response to my ‘Morning, sweetheart,’ as she pulled on her uniform, lights blazing, while I ducked back under the duvet and then listened to her downstairs crashing about getting herself some breakfast. Who’s been peeing on your patch? I wondered. Not that Father Christmas again?

It was no better down in the ward.

‘Hi,’ I said as I walked along to where Lucy was scrubbing out a kennel. I was greeted with the suck of a squeegee mop, the slurp of it being shoved along the concrete floor, and a kick, accidental or otherwise, of the bucket of disinfectant. Right … OK. There was something in the air – apart from the smell of dog dirt. Things that had to be said … stuff to be sorted. But this was certainly not the right time or place, so I left Lucy to it.

There were only two in-patients to check. A pair of Golden Retrievers that, true to their name, had retrieved the carcass of a turkey while their owners had been out, and had then proceeded to demolish it jointly. The resulting haemorrhagic gastroenteritis had precipitated a frantic evacuation in every sense of the word. The owners had sought emergency help two nights back. The Retrievers had been hospitalised and, in the intervening period, their bowel functions had slowly returned to normal. Much to my relief. And to theirs, no doubt. Isn’t it funny how the sight of perfectly formed crap can often provoke jubilation? Well, in me it can. Bit sad really. Anyway, the sight of theirs, waiting to be scooped up, did just that. The fact that Lucy would be doing the scooping up made it even more satisfactory. Now, now, Paul. Less of that.

I bent down and scratched the dogs’ ears through the bars of the kennel door, telling them what a good job they’d done. They responded with a grizzle of pleasure and furious wags of their tails, no doubt eager to tell me it was none of my business. Just theirs.

I walked back up to reception, determined not to buckle under the pervading gloom that seemed to have seeped into Prospect House that morning. Perhaps the sight of one of my bosses, Eric Sharpe, bouncing in would have helped to cheer everyone up. But that wasn’t going to happen today. Wednesdays always saw Eric up on the golf course attempting to reduce his handicap. He was a small, balding vet who jounced around the hospital in a white coat far too big for him. But it covered a man of generous spirit who was always ready for a laugh and was usually able to lift everyone’s mood. Beryl, though, her mind still flooded with the image of a urinating Santa, would have been a major challenge today.

‘Don’t think the heating can be working properly,’ Beryl was saying. ‘It’s bloody freezing in here.’ She was hunched forward on her swivel chair, pulling her cardigan up round her scrawny neck, looking very carrion crow-like.

Stone them, Beryl, I thought, she being the first crow I’d take a pot shot at. No, that was uncharitable. It seemed the mood in the place was beginning to affect me too. One thing I could be sure of – it wouldn’t be affecting Eric’s wife, Crystal, who was the other partner in the practice. She was out visiting one of her ‘specials’ as Beryl would put it – Lady Derwent, who always insisted that Dr Sharpe should be her Labradors’ preferred vet.

‘So,’ I said, rubbing my hands together and mustering up as much enthusiasm as I could to face the glacier (Beryl). ‘What have you got for me today?’

‘The usual,’ she muttered coldly, casting her good eye at me while the glass one did its customary robotic scan of the ceiling. It was a habit of hers that had unnerved me the minute I’d first set my own eyes on it last June.

‘Right,’ I said, rubbing my hands even more vigorously, before parting them to clench my fists.

Beryl continued to give me the eye – her good one – and, observing my hand movements, said, ‘Told you it was cold in here, didn’t I?’

I pictured my hands rapidly flying over the computer to settle round her neck, but restrained myself with a ‘Let’s get on with it then.’

Beryl was quite right about the ‘usual’. There was a string of standard consultations: three booster injections in a row. Very routine stuff. Jab – jab – jab. Hang on a minute. I pulled myself up, reminding myself that it might be routine for me but certainly not for the dogs involved, as it wasn’t every day they got hauled into the surgery to be confronted by Paul Mitchell (BVSc, MRCVS), qualified last year. Prospect House my first job. Been here just over six months. Still a relatively new boy but a wee bit jaded by all the routine stuff.

‘Now, Dandy, there’s a good lad,’ I muttered as I raised the scruff of the Cairn on the consulting table and slipped the needle under the skin of his neck. He didn’t so much as whimper or flinch. ‘What a good boy,’ I added, trying to sound encouraging, as I rubbed his scruff once the booster vaccination had been given.

‘Now what can I do for Bertie?’ I asked, as I tackled the next case, still attempting to muster some enthusiasm. Goodness, what on earth was happening to me? My spirits definitely seemed to be flagging.

Happily Ever After by Kiera Cass
Inside Out by Ashley Ladd
My Sassy Settler (Willamette Wives Book 2) by Maggie Ryan
I'll Be Home for Christmas by Fern Michaels
Soldier on Her Doorstep by Soraya Lane
Another Kind of Cowboy by Susan Juby
This Song Is (Not) for You by Laura Nowlin
Dumplin' by Murphy,Julie
Moving in Rhythm by Dev Bentham
Knights of the Hawk by James Aitcheson