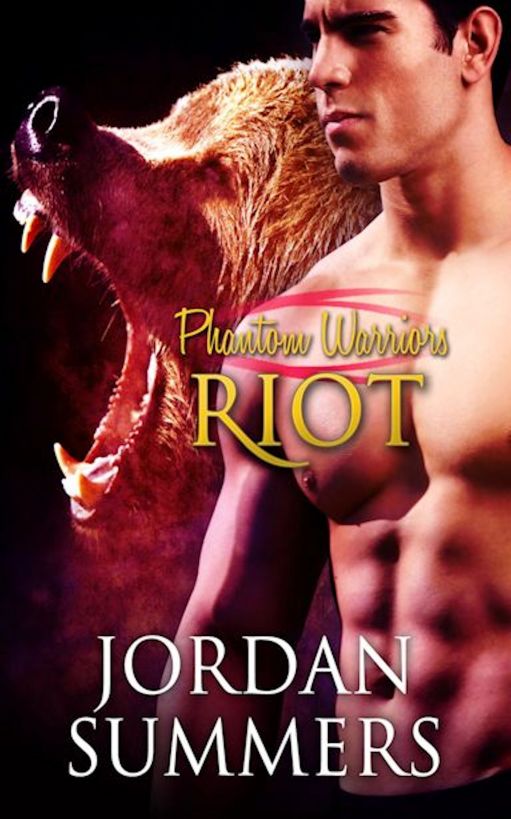 This ebook is licensed for your personal
enjoyment only. This ebook may not be re-sold or given away to
other people. If you would like to share this book with another
person, please purchase an additional copy for each person you
share it with. If you're reading this book and did not purchase it,
or it was not purchased for your use only, then you should return
to jordansummers.com and purchase your own copy. Thank you for
respecting the author's work. This story is a work of fiction. Any
resemblance to places or persons living or dead is strictly
coincidental.

This story is a total and complete work of
FICTION. I took many liberties with the town of Cherokee and the
Cherokee mythology incorporated in this book, twisting and
distorting it to fit the ‘fiction’. The town is beautiful and so
are its people. I have the utmost respect for the Cherokee Nation
and the Great Smoky Mountains National Park. If you’ve never had a
chance to visit, I highly recommend going, so you can see for
yourself.

Other Books by Jordan Summers

Riot clenched the summons in his hand and
glared at it. In all his years as a Phantom Warrior, he’d never
been summoned before the Atlantean King until this week. Nor had he
been summoned before any other king for that matter. He scowled at
the missive. This made the third one in a matter of days, since
he’d returned from Earth. His mind flashed to his brethren, Phantom
Warrior Linx. It was that damn cat’s fault that he was in this
mess.

He should’ve never allowed Linx to talk him
into smuggling Taylor Shelley onto the ship. Riot had only done so
because the woman would’ve been killed had she stayed on Earth. In
his mind, the threat of death superseded the actual ‘rules’ put in
place by the Atlantean people for gathering fertile females. Not
that he expected the King to see it that way.

The fact that the Taylor’s sister was Linx’s
mate…well, that simply complicated matters.

Riot stared at the giant rock slab doors that
guarded the Throne Room and took a deep breath. Deceiving the King
was wrong. He knew it. But for him, honor and friendship trumped
fealty. Riot had no doubt that the King would disagree. He made a
mental note to beat some sense into Linx the next time he saw him,
then growled under his breath and threw open the doors. He stepped
into the Great Hall and scanned the long aisle that led to the
crystal throne. This might be his third visit, but he didn’t like
it any better than the first two.

Long tables fanned out on both sides of the
aisle, separated by only a few feet in order to accommodate large
crowds. Today, they were empty. Perhaps this would be a private
meeting. The thought had barely had time to settle in Riot’s mind,
when he spotted a small group of people orbiting the throne. So
much for a private meeting. Riot’s massive shoulders tensed a
notch. He didn’t want an audience, but if there were others here,
maybe he’d been summoned for a routine reason—not because of the
mistakes and bloodshed that had occurred on his last mission to
Earth. He glommed onto that remote chance, minor though it may
be.

Linx, that lazy good for nothing cat, still
hadn’t bothered to petition the Atlantean King for permanent
residence for their stowaway. Instead, he’d dumped the helpless
woman on Hades, the Dark King, knowing she wouldn’t be
discovered.

Hades only ruled a small part of Planet
Zaron, but the Dark King was formidable. No one crossed him and
lived. Fortunately, Riot hadn’t had to deal with the Dark King…yet.
King Eros was bad enough.

As Riot approached the people hovering around
the throne parted, revealing a large, blond-haired man dressed in a
loincloth. His chest was bare and softened hide enclosed his feet.
Perched upon the glowing green and blue crystal throne, the man
leaned forward, as if in anticipation of his arrival. One look at
the Atlantean King and Riot’s tension skyrocketed, twisting his
muscles into tight knots.

Riot dropped to one knee and bowed his head.
“You summoned me, your Highness?” The question was a formality.
They both knew that he wouldn’t be here if he hadn’t been summoned.
Riot glanced up and met the King’s eyes. His thoughts immediately
turned to food, though he was not hungry.

The King might look soft with his long hair
and pretty features, but he was a powerful Atlantean. And like
all
Atlanteans, he could read thoughts.

Eros’ eyes glittered and his mouth pressed
together as if to seal off laughter. “It’s strange that you’re
always in need of nourishment when I call for you.”

“Yes, your Highness. Truly odd coincidence.”
Riot purposely kept his expression blank as to give nothing
away.

The amusement vanished from Eros’ handsome
face. “Do you know why you’re here?”

Riot slowly shook his head and pictured an
apple pie. “No, your Highness.”

Eros shifted, his thick muscles flexing and
tightening as he moved forward on the throne. “I read your incident
report about the violence that occurred during your last
mission.”

Riot remained silent and thought about the
hamburgers he’d had on Earth. He’d especially loved the ones
covered in ketchup and extra pickles.

Eros’ brow furrowed. “You really should eat
before you come here.” His gaze flicked to Riot’s stomach, then
back to his face. “As I was saying, I wanted to speak with you
about the deaths that occurred. You said in your report that they
were unavoidable.”

They’d gone over this multiple times. So many
in fact, that Riot wondered if the King expected him to change his
story. That wasn’t going to happen. Riot rose from his kneeling
position. “My Phantom brother, Linx was fighting for his life and
the life of his mate when I arrived. He was outnumbered. The humans
were armed with weapons made of steel. They fired metal rounds that
were meant to lodge within the body.”

Eros’ mouth tightened. “I am familiar with
guns,” he said. “What I can’t figure out is why a gun would have
been a problem for a Phantom Warrior.”

“It wouldn’t have been, if not for the safety
of the women—woman,” Riot corrected.

Eros rose from the throne. “Women? Your
report stated that there was only one woman.”

Riot thought about french fries smothered in
gravy and his stomach growled. Several of the Atlanteans present
took a step back as if they expected him to shift into his bear
form and eat them. Riot nearly snorted. None here were to his
liking. Besides, they’d be far too tough.

The King’s lips twitched and Riot stiffened.
His last thought must’ve gotten through. He immediately went back
to thinking about ice cream shakes and toasted buns with thick
burgers wedged in the middle.

“I misspoke, your Highness. There was only
one woman that I can recall,” he said. “Phantom Warrior Linx later
claimed her in order to save her life. Had I not arrived to help,
we might have lost her.”

Eros’ muscles tensed and his nostrils flared.
Anger radiated from his pores. Like Riot, the King wanted to kill
the men all over again for what they’d done to Linx’s mate,
Tabitha. “I trust there will be no further incidents,” Eros
said.

“Definitely not, your Highness.”

Eros nodded. “Good,” he said. “You’re
dismissed. I expect you to be on the next transport back to
Earth.”

“But, your Majesty, I just returned.
Shouldn’t a few of the other warriors have a chance before I’m sent
back out?” This was punishment for omitting information. Riot knew
it, but he couldn’t exactly call the King on it without implicating
himself.

“Are you questioning a direct order?” Eros
asked.

Riot felt his face pale. “No, Sire.” He
turned to leave. Eros’ next words stopped him short.

“I trust if any new details of the event jar
your memory that you will let me know immediately,” he said. There
it was, the suspicion that had been lurking under the surface the
whole time.

Riot looked back over his shoulder. “Of
course.”

He swiveled to face the King once more. “Yes,
your Highness.”

“Do get something to eat. Your hunger is
mentally…
distracting
.” The King’s lips twitched.

He knew. There was no doubt in Riot’s mind,
but somehow he managed to keep his composure. “Yes, your Highness.
Right away.”

Before Riot made it three steps, the stone
doors flew open and a small brown-haired woman swept into the room.
“There you are.” Her gaze bypassed Riot to settle on the King. A
golden-haired boy, the future king of Zaron, and a beautiful
chestnut-haired girl, whose curls hung halfway down her back were
hot on her heels.

The little girl saw King Eros sitting on his
throne and squealed, “Daddy!” As she raced forward, arms
outstretched.

Her brother watched Riot closely as he
passed, his green eyes as off-putting as his father’s aqua blue
ones.

Rachel smiled at him. “I swear I will never
get used to people calling me that.” She shook her head and glanced
at her husband. “We’ve been looking all over the palace for
you.”

The second the King’s gaze landed on his
wife, his blue eyes began to glow. People may have questioned his
return after so many years away, but there was no denying the love
he felt for the human woman, standing before him.

Something in the vicinity of Riot’s hearts
throbbed. He hadn’t experienced any kind of connection with the
women on Earth. Certainly nothing like the kind he saw between the
royal couple. Oh, he’d tried. His body had been more than willing
to ‘test the waters’, but his size seemed to intimidate the females
of the species. Riot couldn’t really blame them. Even among the
Phantom people, he was considered large and rather intimidating—not
that anyone would be able to tell that from the King’s reaction to
him. But Riot had heard his Phantom brothers joking about him on
the ship. The harsh words would’ve hurt, if there hadn’t been a
thread of worry laced with the humor. They hid their concern with
laughter, while Riot hid his pain with silence. He stopped at the
stone doors and glanced one final time at the King and Queen. They
appeared to be so happy. Riot was under no illusion that he’d find
the same happiness.

Nina Whitetail walked down the sterile hall
toward her grandfather’s hospital room. The smell of urine, blood,
and antiseptic cleaners battered her nose and soured her stomach.
Why did all hospitals smell the same? No matter how much they
cleaned they could not cover up the odor of death. It clung to the
walls, the light fixtures, and the very skin of the workers with
its sticky cold fingers. She shuddered and took a deep breath
through her mouth. It did little to help. She pressed on, trying
not to gag. When she reached the nurse’s station, she stopped.