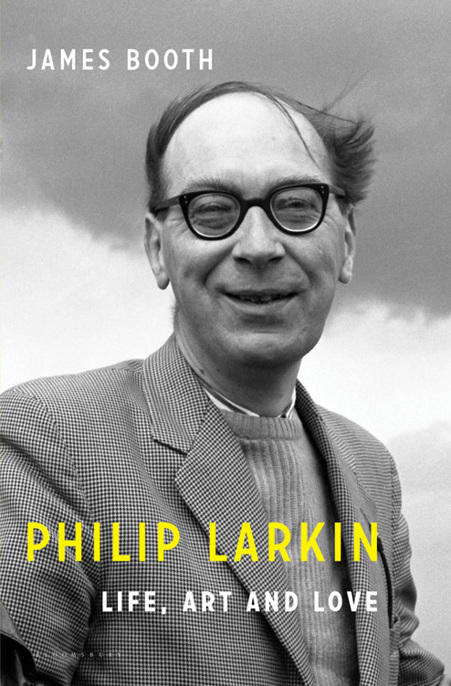 The ultimate joy is to be alive in the flesh.

Quotations are from
The
Complete Poems
(2012). The
Collected Poems
(1988), though less comprehensive, has the great advantage, for those wishing to follow Larkin’s biography, of printing the poems in the order in which they were written. Since individual works are easily located in these volumes I have omitted page references.

Larkin is, by common consent, the best-loved British poet of the last century. Phrases and lines from his poems are more frequently quoted than those of any other poet of his time: ‘What are days for?’; ‘Sexual intercourse began / In nineteen sixty-three’; ‘What will survive of us is love’; ‘Never such innocence again’. Already during his lifetime the publication of a Larkin work was an event. Within days of the appearance of a new poem in the
New Statesman
, the
Listener
or the
Times Literary Supplement
, ‘people would have it by heart and be quoting it over the dinner table’.
1
A recent blogger speaks for many when he recalls reading his slim volumes ‘to tatters’.
2
Since his death Larkin’s poetic reputation has become even more secure. A 2003 poll of several thousand readers by the Poetry Book Society and the Poetry Library voted his heart-warming celebration of marriage, ‘The Whitsun Weddings’, the most popular poem of the previous half-century.
3
His harrowing self-elegy ‘Aubade’ was seventh on the list. The witty, humorous poems are equally popular. As he himself wryly reflected: ‘“They fuck you up” will clearly be my Lake Isle of Innisfree.’
4
His poetic range seems all-encompassing.

He remains, however, a controversial figure, both as a poet and as a man. Even the apparently neutral question of which of his poems deserve to be printed under his name raises fierce passions. During Larkin’s lifetime the mature collections,
The Less Deceived
(1955),
The Whitsun Weddings
(1964) and
High Windows
(1974), established an oeuvre which gave all the appearance of perfection. The modulated sequences in these books seem to carry the same authority as the text of one of his poems. So when, following his friend’s death, Anthony Thwaite was called upon to edit the
Collected Poems
, his task seemed simple. Editorial tradition required him to reproduce these volumes in their original form, adding poems published in magazines or newspapers in a separate section. Important unpublished works might perhaps be printed in an appendix; unfinished poems must be excluded. However, Thwaite faced a dilemma. There existed a hitherto hidden version of Larkin’s life’s work, more comprehensive than that of the existing publications, and carrying equal if not greater authority. Larkin had constructed his oeuvre with rare deliberation. For three and a half decades, from October 1944 to November 1981, he had written virtually all his poetic drafts in pencil in a series of eight manuscript workbooks, entering dates, usually to indicate a ‘final’ version, and sometimes inserting typescripts with last-minute changes. These workbooks contain his most intimate poetic autobiography.

Archie Burnett notes that Coleridge advocates ‘a thoroughgoing chronological arrangement’ for a poet’s work, since this enables the reader readily to follow a development from early to late.
5
Confronted with the workbooks, Thwaite made the bold decision to adopt this policy in the
Collected Poems
of 1988. Moreover a number of workbook poems which had remained unpublished, including ‘An April Sunday brings the snow’, ‘The View’ and ‘Love Again’, were clearly of comparable quality to poems already published. Thwaite therefore inserted into the sequence sixty-one ‘new’ poems, including the key incomplete work, ‘The Dance’. The result was revelatory. In an early letter to his friend James Sutton, Larkin referred to his writing as a record of his ‘soul-history’.
6
In Thwaite’s edition, this soul-history was laid bare in a new and unexpected way. It was revealed, for instance, that Larkin had been unable to complete a poem for eleven months following the death of his father in 1948. In the abandoned draft of ‘The Dance’ (1963–4) readers were able to follow his never-resolved mid-life crisis. The final poems in the eighth workbook showed his inspiration guttering in the mid-1970s.

The Whitsun Weddings
volume of 1964 conducts the reader, with artful contrasts of comic and tragic, reflective and dramatic, from the opening chords of ‘Here’, through the gloomy meditation of ‘Dockery and Son’ to the yearning finale of ‘An Arundel Tomb’. Thwaite’s sequence reveals, instead, the poet’s emotional journey. ‘An Arundel Tomb’, reflecting his commitment to Monica Jones, was completed in 1956. The serene ‘Here’ came five years later in October 1961, when he was still safely in his thirties, his professional career was at its most satisfying and his relationship with his Hull muse, Maeve Brennan, was at its happiest. By the time of ‘Dockery and Son’, eighteen months later, he had passed the threshold of forty and was descending into crisis. Those who wish to follow the narrative of Larkin’s life as a man and an artist will find Thwaite’s 1988
Collected Poems
a surer guide than the lifetime volumes.

Thwaite’s reconfiguration of Larkin’s life’s work caused a furore. He was accused of disregarding the poet’s ‘intentions’ by destroying the harmony of the lifetime volumes and of releasing ‘second-rate material’ which Larkin had not seen fit to print.
7
His critics forgot that publication had not always been simply a matter of Larkin’s intention. One of the reasons he was so hesitant to publish even some of his best work was the trauma of 1948 when his volume
In the Grip of Light
was rejected by six publishers. Fourteen of the poems in this collection remained unknown until 1988 simply because no publisher had seen fit to print it.

In the 2003 edition of
Collected Poems
editorial orthodoxy was reasserted. The sixty-one additional poems were omitted altogether and the order of the lifetime volumes was restored. In 2005 A. T. Tolley complicated the picture by publishing, in
Early Poems and Juvenilia
, a large number of works written when Larkin was in his teens. Then, in 2012, a certain closure was achieved in Archie Burnett’s
The Complete Poems
, which aimed to print ‘all of Larkin’s poems whose texts are accessible’
.
8
Despite his respect for Coleridge’s chronological principle, Burnett reproduced the order of the lifetime volumes; but added, in a separate section, the ‘new’ 1988 works, the juvenilia and also some hitherto unknown fugitive squibs from letters. The very completeness of Burnett’s project offended some. He was accused of ‘diluting a major oeuvre and distracting from the real source of its power’,
9
and of publishing ‘every napkin- or matchbook-jotting’.
10

The possessive passion which so many readers felt towards the established lifetime canon offers a pointer to the unique nature of Larkin’s poetic achievement. Readers deplored the insertion of works which seemed to lack the authority, the
necessary
quality of his familiar masterpieces, and they resented seeing his poems placed in the contingent context in which they had been written. These readers need not have worried. As the dust settles it is clear that there has been an expansion rather than a ‘dilution’. Disregarding most (not all) of the juvenilia and the doggerel squibs, the larger Larkin oeuvre revealed in the
Collected Poems
and
The Complete Poems
has a rigour and economy equal to and more organic than that of the volumes published in Larkin’s lifetime. Larkin’s complete works contain only a tiny proportion of dross compared with those of, say, Wordsworth or Auden.

At the age of thirty in 1953 Larkin set out his aim in a tone of jokey presumptuousness: ‘I should like to write about 75–100 new poems, all rather better than anything I’ve ever done before, and dealing with such subjects as Life, Death, Time, Love, and Scenery in such a manner as would render further attention to them by other poets superfluous.’
11
He largely succeeded in his aim. Among literary forms the lyric is at the extreme of verbal economy and concentration; a great lyric poem strikes the reader as the distilled ‘last word’ on a universal theme. Larkin’s mature oeuvre has been said to contain ‘a remarkable percentage of the definitive poems of his time’.
12
For the moment he seems to have had the last poetic word, on love, on death, on the Great War, on parents, on ageing, on hedgehogs. Poets writing on these subjects today struggle to escape his ‘definitive’ voice and find their own.

He achieved this definitiveness by the extreme economy of his genres, forms, types of rhyme, even individual words. Larkin’s oeuvre does not comprise, as do those of, say, Yeats, Housman or Hopkins, numerous poems on similar themes and with repeated or overlapping forms. Those who have taught his poetry will be familiar with the frustration of attempting to move on with their students to another Larkin poem similar to ‘An Arundel Tomb’ or ‘This Be the Verse’ or ‘Sunny Prestatyn’, only to be compelled to start again from scratch, since there are no other poems ‘like’ these. Each of his works is ‘its own sole freshly created universe’,
13
comprehensively differentiated from the others in terms of form, style and voice. As he put it in an arresting metaphor, ‘Poetry is not like surgery, a technique that can be copied: every operation the poet performs is unique, and need never be done again.’
14

Recipe for Temptation by Maureen Smith
Beyond The Horizon by Mason, Connie
Calico Captive by Elizabeth George Speare
Political Order and Political Decay by Francis Fukuyama
The Mistress Of Normandy by Susan Wiggs
Pretty Little Liars by Sara Shepard
The English Boys by Julia Thomas
Provider's Son by Lee Stringer
The Dreamstalker by Barbara Steiner
Haven: A Trial of Blood and Steel Book Four by Shepherd, Joel