Pieces of Jade (Pirates of Orea) 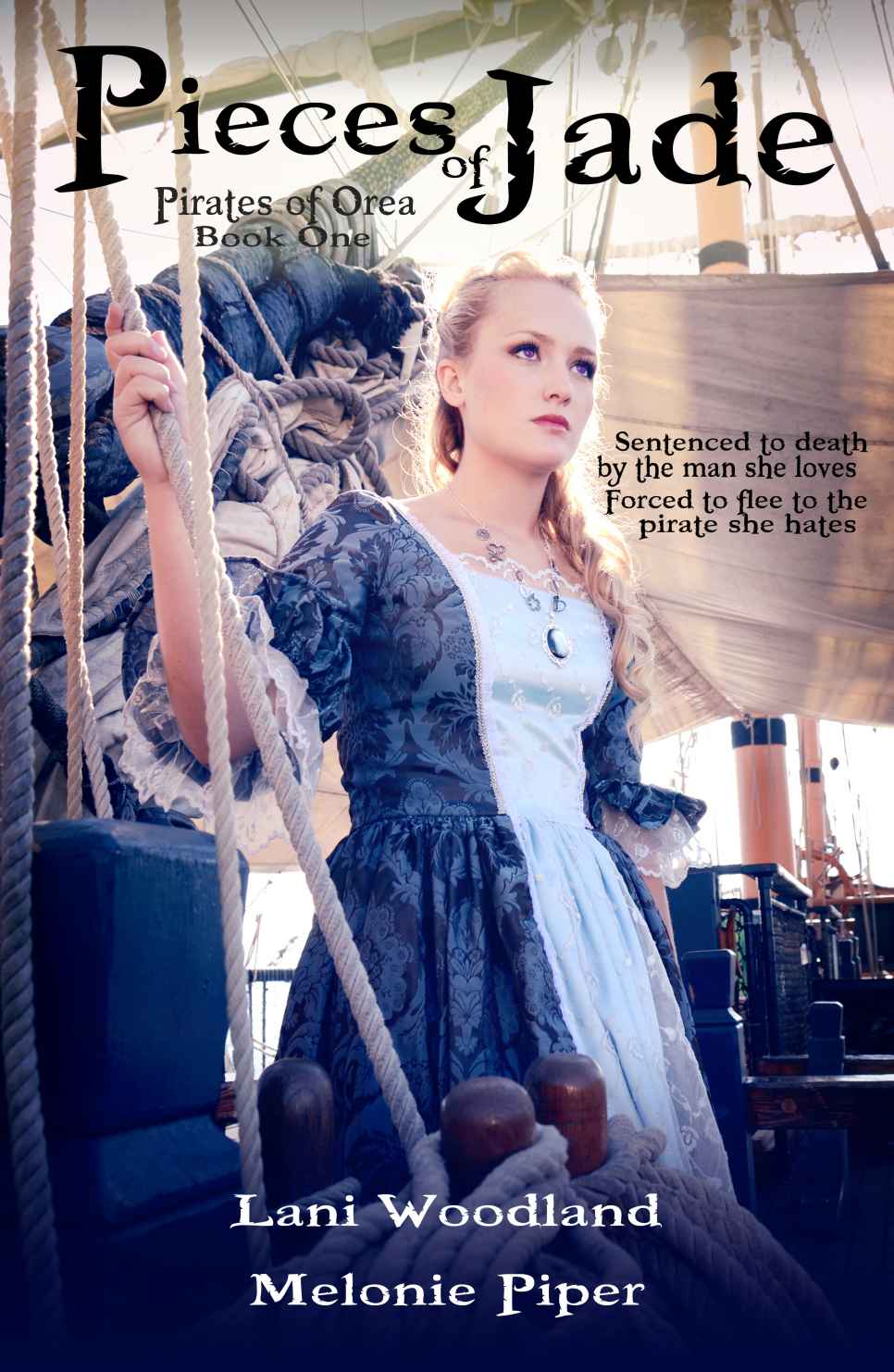 The characters in this book are fictitious. Any similarities to real persons, living or dead is coincidental and not intended by the authors. This is a work of fiction; characters, names, places, and incidents are either a product of the author’s imagination or if real, are used fictitiously.

Scanning, uploading, copying or distributing this book via the internet or via any other means without permission of the authors is illegal and punishable by law. Your support of author rights is appreciated.

Text copyright © 2013 by Michele Tolley and Melonie Piper. All right reserved, including the rights to distribute, transmit, reproduce in any form or by any means. For information regarding subsidiary rights, please contact the Authors.

This book is dedicated to Sheridan,

who
saw a lonely autistic boy and chose to be his friend.

This book is dedicated
to my little girl, Adelyn

who
donated her precious mommy time so

I could write this book,
who has been there

for
me during the entire writing process,

and
has encouraged her mommy to keep going.

The engagement ring encircling my finger felt like a hangman’s noose. Sometimes—just sometimes—the gallows seemed preferable to my upcoming marriage to a man I didn’t love. Today, on the day before my wedding, hanging definitely sounded more appealing. Candlelight flickered off the row of encrusted diamonds embedded in the band and I concentrated on their shine rather than the blade poised to cut across my left
palm.

Gabrielle
brought the knife down, slicing along the sinuous scar to reopen the old wound. For centuries, every Emmía before me had knelt in this same room of the castle with this same spelled knife. Each and every one had willingly bled for her people. I shifted on my knees, but the stone floor still carried the early morning chill into my bones and the fire sputtering in the hearth did little as a draft crept down the chimney.

A rivulet of blood warmed my palm as it ran down my fingers, cascading over the gold of my ring and coating the diamonds, hiding the gleam of the gems. Prince August insisted I wear it at all times, even now during the
blood-letting, as if he needed the constant claim of ownership. Like the collar on a favored hound.

How appropriate that the blood would envelop the symbol of my engagement to him
.

And tomorrow I will be a wife.
His
wife. Tied to the handsome Crown Prince. Girls throughout the land would envy me—I’d heard the jealous comments often enough. Strange how one person’s dream could be another’s nightmare.

Despite being lined by age,
Gabrielle stood tall as she motioned for me to extend my right hand. Her auburn hair was pulled into a tight bun, adding to the severity of her angular face and accentuating her willowy figure, and the way she frowned made it seem like my now stinging left hand hadn’t given enough blood. I bit my lip, prepared for the pain as I stared at my favorite tapestry in the corner. After years of such ceremonies, I should be used to the sting—the parting of my flesh. But when Gabrielle milked the cuts for better flow, I gritted my teeth to keep from whimpering.

The tapestry was of Princess Dawn. Older than all the others, with their heroic depictions of battles won and enemies defeated, this ancestor of mine was the only woman to grace any
within the castle. Princess Dawn—the original Emmía. The first to bleed for her people, the first to save them from starvation. Seeing her image—the violet eyes, the blonde hair, the crimson streaks dripping from her hands—gave me strength.

On the dais sat three thrones. At the center, the largest throne was empty. Beside it sat my fiancé, August, his eyes trained on the bowl collecting my blood. I tried to ignore the small smile on his lips. Instead, my eyes moved to his brother, James, who sat in the throne on the other side, his fingers pinching the bridge of his nose and his eyes averted.

I could feel my strength leaving my body with every heartbeat, the loss of blood taking its toll. Beneath me, the ridges of the etching on the stone floor dug into my knees. After each ceremony, parts of the king’s coat of arms—an edict medallion set over a bloody dagger, the necklace’s chain wrapped around the dagger’s hilt, and a small shoot of plant pushing through fertile soil—were almost branded into my skin where I knelt. Even the layer of skirts didn’t cushion the unforgiving floor.

As soon as the sacred container was full,
Gabrielle and her two assistant Guardians held it aloft and began to sing in unison.

“Blood collected in candlelight, may you fertilize the kingdom’s soil and feed the people. May the blood loss that weakens the Emmía empower the Kingdom of
Orea.”

Every blood ceremony ended with the Guardians, our magical protectors, chanting over my sacrifice. It’d been done this way since Princess Dawn had been brought from her island home to marry the
Orean prince.

When the chanting ended,
Gabrielle sealed the bowl and moved away. I longed to follow them—to actually see the kingdom’s cursed soil drink up my healing blood. Maybe if I saw that, I wouldn’t despise letting them open my veins twice a month.

But instead of leaving,
Gabrielle returned with another bowl cupped in her palms. An empty one. She poised the knife above my wrist and I pulled back, startled.

“What’s this?” James demanded, rising from his throne. “You can’t seriously expect her to give
more
?”

Gabrielle
’s eyes were fixed on August, the blade held motionless as she awaited his verdict.

“The king approved it.” August waved his hand in the air. “Continue.”

James turned toward his brother. “But the wrist—once cut, it’s hard to stop the bleeding.”

“Stop being so daft, James. They’ll use magic.”

James slumped back in his throne, his lips pressed tight.

One of the assistant Guardians grabbed my hand while
Gabrielle slid the edge of the blade down my wrist, the pain quick and intense. The blood flowed faster than it had from my palm. I watched, fascinated at the pattern it created on my pale skin. Before the bowl was half full, the room around me grew dim, my eyes unable to focus. Pinpricks of yellow exploded in my vision, and my head swayed. I tried to kneel nobly for my kingdom, but I felt myself slump forward onto the cool stone of the altar, my edict medallion pressing against my chest as darkness overcame me.

Two angry voices dragged me back from unconsciousness. I was lying on my back on a thick rug, but my eyes were too heavy to open. James and August argued above me.

“They took too much!” James shouted.

“It was hardly a significant increase,” August said calmly. “
She
accepts it. Why can’t you?”

“How can
you
accept it? Jade just fainted.”

“You care too much. She’s
my
fiancée.”

“As if you’d let me forget.” James huffed as his footsteps retreated and the antechamber doors swung open. “Someone send for Pearl,” James ordered. “Tell her that her sister needs her.”

Pearl. She was only a few years older than I was, but somehow she felt wiser, more mature. She always knew the right thing to say, and exactly how far she could push her opinions with August, stopping just before he could have reason to punish her.

I forced my eyes open. The gilded ceiling swung in and out of focus. A chandelier with flickering candles hung from the beam that arched the ceiling. Even though the sun had risen an hour ago, the room was darkened from the thick drapes that were always shut during the ceremony.

I closed my eyes again and the gentle rustle of fabric alerted me that someone knelt beside me. James. I recognized the smell of his clove scented shoe polish.

Despite how faint I felt, I smiled. “I hear you, James.”

James’s coat brushed my cheek as he moved closer to me. “Your definition of ‘fine’ is very different than mine.”

Light, hurried footsteps and the sound of jostling jars drifted from across the room. My eyes
slitted open enough to see my sister taking out her healing materials from her traveling kit.

“The cuts are already closed over,” August said. “Really, why is everyone making such a fuss?”

Pearl’s touch was gentle and the burning in my palms lessened as she applied lavender oil, and I was finally able to focus on those in the room.

Pearl shook her head. “They didn’t seal these properly.”

“I was afraid of that,” James said. “After she fainted, they hurried through the rest of the ceremony, spending very little time on the healing magic.”

Pearl took a deep breath. “She fainted? And they didn’t stop?”

“It wasn’t the first time.” August clasped his hands behind his back, a lock of his curled brown hair falling into his eyes and his thin face resolute. “She’ll be fine.”

“The more blood you take, the more dangerous it becomes for her.” Pearl brought a glass to my lips and urged me to swallow. “If you take that much, she’ll need longer than two weeks to recover between ceremonies.”

August’s
lips twisted into a smile that could freeze fire. “Are you giving me an order?”

Pearl dropped her head. “Of course not, my Lord. It is merely my recommendation as her healer that she needs longer to rest.”

“I’m sure I could find other healers that would disagree with you.”

The corner of Pearl’s lips pinched together before she nodded. “I’m sure you’re correct, your Majesty.”

James held my arm, careful to avoid my injured wrist and palm. My heart skipped at the feel of his fingers and the way they caressed me through the material of my dress. It felt wonderful to have him close. He’d been distant this week and I’d feared he’d been angry.

James’s other hand twisted in my hair. “Surely we have enough of her blood stockpiled until the birth of the next Emmía.”

“Two hundred years is a long time, little brother.” August sounded exasperated as he settled back onto his throne.

“But you haven’t been raised to rule. I can’t afford to worry about the individual. I have to consider what’s best for the kingdom as a whole.” August leaned forward. “You can take comfort that she only has a few more years of bloodletting left.”