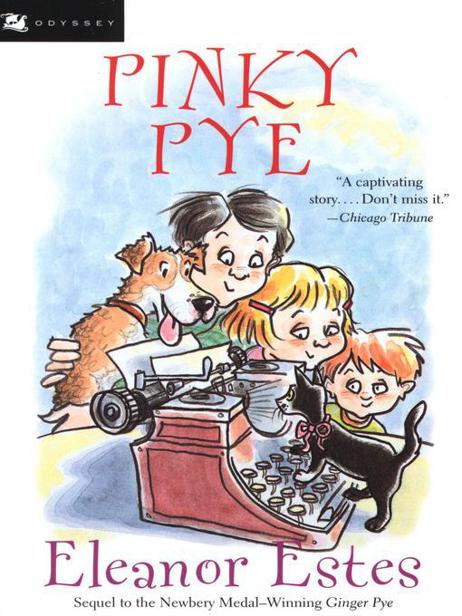 All rights reserved. No part of this publication may be reproduced
or transmitted in any form or by any means, electronic or mechanical,
including photocopy, recording, or any information storage and
retrieval system, without permission in writing from the publisher.

Requests for permission to make copies of any part
of the work should be mailed to the following address:
Permissions Department, Harcourt Brace & Company,
6277 Sea Harbor Drive, Orlando, Florida 32887-6777.

One day, guess who was standing on a little wharf in a town on Long Island waiting for a boat to carry them across the Great South Bay to another island named Fire Island. The Moffats? No. They never went away from Cranbury. The Pyes? Right. Ordinarily the Pyes never went away from Cranbury either, except for Papa, who was a renowned ornithologist and accustomed to travel in places near, faraway, and even dangerous. How did it happen then that all the Pyes—Mr. and Mrs. Pye, Jerry age ten, Rachel age nine, their small Uncle Bennie age three, their year-old smart dog Ginger, and Gracie, their eleven-year-old smart cat—amidst piles of luggage and parcels with strings hanging loose, signs of a long and wearying trip, were standing here on this briny-smelling wharf instead of being in their own tall house in Cranbury, Connecticut?

It happened that about a week ago Papa, who was the main person the senators and the representatives in Washington depended upon for solving hard problems dealing with birds, had received a dispatch from these important men asking him to go to a place named Fire Island and make a study of the birds there, if he were interested, that is, they said courteously.

"A new journey so soon!" thought the Pyes. Papa had only just returned from a trip to the West Coast, where he had been comparing notes with another ornithologist, Mr. Hiram Bish, who, Papa said, owned the smallest owl he had ever seen, a baby pygmy owl. It wasn't more than two inches high, and it was the special pet of Mr. Hiram Bish and his wife. Papa might be a famous bird man, but he had never brought a bird home from his travels to keep for a pet as this other ornithologist had.

"Too many other pets in this house," he'd say with a shrug. "Supposing I studied bugs, would you want the house full of bugs?"

The only bird that Papa had was a stuffed screech owl in his study, and this had been the gift of Mrs. Moffat, who had donated it to him when she had moved from the Yellow House on New Dollar Street, because, in her new and smaller house on Ashbellows Place, she had no attic and no room for stuffed screech owls.

Usually Papa's bird studies led him to faraway places, the Everglades, the barren lands of Labrador, and, once, South America. Of course Papa had never been able to take his family with him to these far and dangerous places even though Rachel, up until the very moment of his departure, hoped he would invite at least her, for she planned to be an ornithologist herself someday. But Papa did not know about this plan, and he always gave her an absentminded kiss and hug, the same as he did everybody else in the family. "Be sure and lock the cellar door each night," he'd say. It was as though this remark was his way of saying, "Take good care of yourselves." And then off he would go, lugging his suitcase to the corner of Elm Street where the trolley ran.

In view of these far places to which Papa usually went, it was a great surprise, then, when the men in Washington wrote and suggested that he-go to Fire Island, which was really quite near. The reason the men in Washington asked Papa to go to Fire Island was that they wanted to print a document about the birds there and they felt that Pye was the man for the job. An inhabitant of the island, one of the few all-year-round inhabitants, not a bird spotter or anything of that sort, just a regular inhabitant—her name was Mrs. A. A. Pulie—had discovered a puffin there. Bird spotter or not, Mrs. Pulie, having spent her entire life on this island, had plenty of sense about what birds you were supposed to see there and what you weren't, and she knew that a puffin was out of the ordinary. So she had reported it to the Bureau of Birds, which had promised an investigation, it was that curious about the puffin. And, in her turn, Mrs. Pulie had offered to rent her cottage to the ornithologist of Washington's choosing, at a very modest rental,
she
was that curious about the puffin and birds in general.

Fire Island is a long and skinny island just south of Long Island, which is also a long and skinny island, though it is fatter than Fire Island and much longer. If Long Island had not been in the Sound just south of Connecticut, you might have been able to see Fire Island from Cranbury, town of the Pyes and Moffats. Probably not. But who knows? On a clear and sparkling day, who knows how far one sees?

When Papa had received the letter about Fire Island from the men in Washington, he said that if his check from
The Auk,
one of the learned magazines for which he wrote, came on time (for the men in Washington said nothing about paying for the expenses; they just said wouldn't it be nice to find out about the puffin and the Fire Island birds?), he would pack up the entire family and take them along with him on this near and pleasant bird expedition. They could stay for the entire summer, he said, smiling his nice sideways smile.

The check from
The Auk
had come, on time. "Hurray!" said Papa. "We can go! We can spend the whole summer. I can write ten books!" he said. Papa was always about ten books behind in his writing.

Rachel and Jerry had happened to be sitting on the little upstairs porch when they heard this astonishing news. At first they did not know whether to be happy or sad, for they had never before been away from Cranbury for that long a time. "What! The whole summer!" they said to each other. "Go to Fire Island for the whole summer!" It sounded like the hottest place outside of the sun that they had ever heard of, excellent for winter expeditions perhaps, but ... go to Fire Island for the whole summer! Just throw away the whole wonderful summer in Cranbury when there was no school and no Sunday school, only church to go to? They had a beach here, didn't they? Sandy Beach, dear Sandy Beach. Why go to another beach just because it had a different name? And they had woods here, didn't they, and brooks and fields and daisies and summer, long and wonderful summer. Just throw it all away, waste it. It would be like skipping a chapter in a book; or like having a chapter, the best one probably in the whole book, either torn out or so blurrily printed it could not be read.

"No. Neither do most people," said Jerry.

"No. They sit on their porches and rock in the evenings, and they hose their lawns."

Here in Cranbury it was nice. On misty days it smelled like the sea, for it was near the sea. And after a thunderstorm the town smelled particularly wonderful. The gutters gurgled merrily then with the swift rainwater racing to the drains, with sticks for boats and chewing-gum papers for rafts bumping into each other as they were swirled along. A person could go barefoot in the wet and new-cut grass.

Then Rachel hit herself hard on the head. "Am I crazy?" she asked herself. "Look at me! A girl who at last has a chance to go with a famous father on a famous expedition to watch birds and what does she do? She wishes she could stay home in Cranbury, same old Cranbury. Am I a nut?" she asked herself scornfully. "No," came the answer quickly. "I'm really happy to be going. I'm going to be a bird man too someday, and this may be the beginning. I may be the one to discover an important discovery. About a feather, at least, if not the whole bird."

Rachel waited tensely for what Jerry would say next. She liked life best when she and Jerry thought exactly the same about things, unless they were playing a game, of course. Then she would have to take an opposite side or where would the game be? When Jerry's reaction did come, it was strong.

"What!" he squealed when he was certain that Papa was way up in his study, his Eyrie, as it was called, and could not hear him. "What! Not go up to the woods and the resevoy every minute and catch frogs and cook them and eat them, and everything, with Dick and his big dog Duke and me with my dog Ginger! O-o-oh!" he groaned.

Then he fell silent, and Rachel wondered if she would have to go back to not wanting to go too since he didn't and this wasn't a game calling for opposite sides. But then Jerry said, "Well, you know what? There are breakers there. It is like Hawaii, and you can coast in on a breaker. I've seen breakers in moving pictures, colored pictures, and you roll in, in Waikiki."

"Besides, I may find some ancient specimen of rock, some unusual specimen, not a Cranbury or a Sleeping Giant one but an unusual one, a million years old."

Specimens were what Jerry was interested in, not birds that fly away before one can be sure what they are but specimens of rock that may be scrutinized at leisure in one's room by lamplight, late. Rocks were always tumbling out of his pockets, wearing holes in them. He loved rocks. He didn't know whether there were any rocks on Fire Island or not, but whoever heard of any place, except perhaps the desert, without some rock?

Turds in the Punch Bowl (A Story of No Ordinary Friendship) by Ashton, Jen
In The Wreckage: A Tale of Two Brothers by Simon J. Townley
Comfortably Numb: The Inside Story of Pink Floyd by Mark Blake
The Cowboy and the New Year's Baby by Sherryl Woods
They call her Dana by Wilde, Jennifer
Putting on the Witch by Joyce and Jim Lavene
The Deadly Nightshade by Justine Ashford
The Cowboys' Submissive (Discrete Assignments) by Pearl, Jane
Dead Of Winter (The Beautiful Dead Book 2) by Daryl Banner
Farmerettes by Gisela Sherman