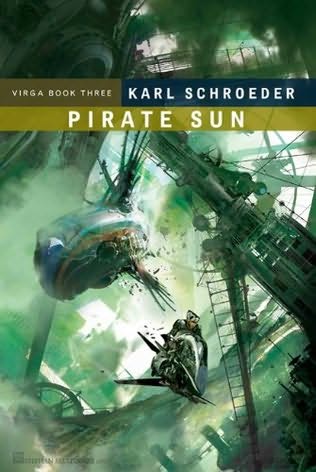 To the Tuesday night group,
for years of excellent conversation. 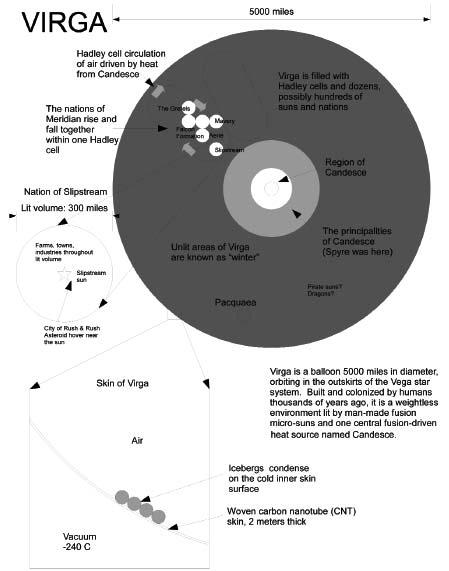 “Nothing is more difficult,
and therefore more precious,
than to be able to decide.”

Part One | The Admiral

“
ONE THING I
can
guarantee,” said Venera Fanning. “There has never been a prison break like this one.”

The barrel-shaped tugboat was so old that moss had spread continents over its hull, and tufts of grass jutted from its seams like hairs from an old man’s chin. The powerful drone of the vessel’s engines, as its small crew tested them, put a lie to any impression that it was feeble, however. In fact the bone-rattling noise of the test quickly drove Venera and her small group away from the drydock framework that enclosed the tug. Venera turned away from it and squinted past the light of Slipstream’s sun. The city of Rush spread across half the sky, its gaily bannered habitat cylinders turning majestically among wisps of cloud. It was midday and the air was full of airships, winged human forms, and here and there cavorting dolphins.

One figure had detached itself from the orderly streams of flying people, and was approaching. Venera saw that it was a member of her private spy network, a nondescript young man dressed in flying leathers, his toeless shoes pushing down on the stirrups that drove the mechanical wings strapped to his back. He hove to and she admired the sheen of sweat on his shoulders as he saluted. “Here’s the latest photos.” He proffered a thick envelope; Venera took it, forgetting about him instantly, and tore it open.

Her fingers rose of their own accord to touch the scar on her jaw as she looked at what the pictures revealed: the planes and corners of a stone prison that hovered alone in cloudy skies. Not one building, but six or seven that had been lashed together over the decades, the blocky, boulderlike edifice hung half-wreathed in its own fog bank. The blocks, spheres, and triangles of the Falcon New Prison were of various architectural styles and colors, literally thrown together and hybridized with clumsy wooden bridges and rope-and-chain lashings into one cancerous monster whose only common element was that all its windows were barred.

With no gravity to flatten it, the composite prison was stable enough; storms were rare on the edge of civilization and there were no obstacles for the place to run into in its endless drift. The New Prison was a child of neglect, a forgotten mote on the fringe of the vast cloud of workers’ dormitories, collective farms, and planned cities that was Falcon Formation. Most of the cargo delivered here was on a one-way journey.

She took a deep breath and smiled up at the courier. “Ask them if they’re ready,” she ordered. “There’s no time to lose.”

“Master Diamandis also sent these.” He handed her another envelope. This one contained dossiers, but she only glanced at them briefly.

“I’ll deal with them when we get back. I want to see this.”

At that moment the tug’s engines coughed and wound down. Venera spun in midair, a lithe movement born from a lifetime spent moving from freefall to gravity and back again. She glared at the crew, who were boiling out of the suddenly smoking vessel. “Now what have you done?”

“It’ll work!” The chief engineer was practically wringing his hands as he flew around the curve of the ship. Like any sensible person he was afraid of Venera’s wrath; she decided to show some restraint and merely shrugged to hide her disappointment. “I’ll be back in two hours,” she said. “See that it’s ready to fly by then.”

“
THESE ARE THE
players.” Garth Diamandis laid out photos like playing cards across the tabletop. They sat under gravity, in a set of apartments Venera had rented (under the name of Amandera Thrace-Guiles) in one of Rush’s more upscale town wheels. Garth, an aging dandy who had recently become Venera’s closest friend and confidante, rearranged two pictures to overlap. “Martin Shambles is a key member of the Aerie resistance. Your friend Hayden Griffin apparently knows him.”

“That’s no surprise,” Venera muttered. The nation of Slipstream spread in all six directions from its capital, this city; yet the thousands of cubic kilometers of farmland and township lit by Slipstream’s sun had once been owned by a rival nation, Aerie. Slipstream had destroyed Aerie’s sun, conquered the country, and assimilated its people—so naturally there were resisters. Griffin himself had been one when Venera had first met him.

“Since Griffin’s reappearance and subsequent second disappearance, Shambles has been funneling supplies and money to a location in one of the sunless countries,” Diamandis went on. “If that’s where Griffin took the sun-making devices he acquired in the sun of suns…”

“…Then that’s where Aerie’s new sun is being constructed,” said Venera. She sat back. “Huh! That boy never ceases to amaze me. He was a good driver back when I employed him. Seems he’s making an even better hero.”

If Aerie could build and light a new fusion sun for itself, its people might be able to free themselves from bondage to Slipstream. Venera had married into Slipstream’s nobility, but that didn’t mean she had any loyalty to her new home. After recent events, in fact, her loyalties went in quite the opposite direction.

“So…” The deliciously intricate plot she had been gestating for weeks had taken a satisfying turn. “Granted the standoff between the admiralty and the palace, we already have two major players playing chess with one another’s nerves.”

“Three players, if you count the rioters,” said Diamandis.

“Four, when you add in Aerie’s various nonaligned malcontents.” She held up several fingers. “Then five, if you add in Hayden Griffin and Shambles’s people. All of their interests converging rapidly. I wonder when that new sun will be ready?”

“And then…” prompted Diamandis; he smiled in that way that had melted so many young ladies’ hearts in his youth.

“Then there’s
us,
” said Venera. “All these contending forces are winding each other tighter and tighter. Rioters in the city, the admiralty and the palace facing off against one another, and then this Aerie conspiracy. What they all need is a spark to set off the powder keg.”

She and Diamandis grinned at one another across the table. Then Venera rose, strode to the window, and twitched aside the heavy velvet curtain. She looked out over a sweep of rooftops that curved up in the distance, gradually becoming vertical. Many of the roofs were painted or shingled in patterns; when you lived on the inside surface of a cylinder, your roof was the most visible feature of your house, and Rush’s citizens took pride in their houses.

Venera wasn’t seeing the colorful vista. “A new Aerie sun!” she said, shaking her head. “This is exactly what we need. Garth, I want you to find out when it’s going to be ready. We’ll synchronize our own plans with theirs—establish a liaison, without revealing who we are.”

Venera opened the window and leaned out; the rotational winds immediately lofted her black hair around her head like the wings of a raven. She closed her eyes at the freshness, feeling satisfied for the first time in many days. She’d been branded a fugitive in Slipstream, had been hiding in these few rooms since her return, but she was about to remedy that situation. A great trap was being set, and all she needed now was the trigger.

There was a discrete knock on the door. “It’s ready,” said a servant. Venera sat up with a jerk and swept the photos off the table.

It was satisfying, being just one mote of thousands crowding the city’s airways, yet knowing that even the rioters who had burned the Grand Market in Cylinder Two were less a danger to the city than she. Venera watched out the bullet-shaped taxi’s window as all the myriad details of the city’s weightless neighborhoods flew by: food vendors and craftsmen selling their wares from inside wicker balls—a veritable cloud of these balls making up the farmer’s market; big nets full of produce (a galaxy of cabbages here, a trove of engine parts there) being towed by straining jets or tethered albatross flocks; a quivering ball of water thirty feet across where some day laborers had stripped off their shirts and were dunking their heads and shoulders, laughing like little boys. All these details outlined in hard-edged brilliance by Slipstream’s nearby sun.

At the moment Rush Asteroid was shading the drydock from that sun. The silhouetted asteroid was furred along its black outline by the trees that covered it. A cloud bank had formed in the cooler air of that long shaft of shadow, and tendrils of gray were closing around the drydock as Venera arrived. The tug’s crew were making their final adjustments. While she hovered—literally—her eyes played across the panorama of infinitely receding cloud and sky that lay beyond the city. This maze troubled the eye in every direction. There was no up or down to Venera’s world—save for what you made yourself—only the light of nearby suns providing any orientation at all to the tugboat’s crew. Even that vanished at night. This lack of direction made journeys like this one hazardous for even the most experienced pilot. They made communication over international distances unreliable; sporadic, at best.

She had every reason to stay here in Rush to oversee the unfolding plan. That was the logical thing to do, and the safe thing.

Venera turned to Garth. “Well,” she said. Suddenly she realized what she was going to do. “Take care of things,” she said, kissing him on the cheek.

“You’re not going too?” he asked incredulously.

“I’ll be right back,” she said in a tone that was simultaneously bright and defensive.

“But, this is when we’re going to need you the most—”

“Oh, Garth, you’ve never
needed
me,” she teased, and then before he could say anything more, she dove for the tug’s open hatch.

“Contact Hayden! And Shambles! But keep it arm’s-length, mind!” She waved from the closing hatch. “And spend some time with your daughter! She’s still not to be trusted!”

Garth cursed lividly—but laughed anyway—as the tug spewed exhaust into the pristine mist and soared away. It cleared the girders of the drydock, leaving behind a slowly expanding galaxy of bolts and screws, discarded hull plates, and bent wires.

As it followed the long cone of Rush Asteroid’s shadow away from the city, mist beaded on the ship’s nose. Now the condensate rolled along the hull past booster rockets the size of a man that Venera’s team had bolted to the iron. The droplets crept like a blindman’s fingers along the links of a mile of heavy chain that the team had coiled around the tug’s waist. Aft, the drops detached and quivered in the air like weightless jewels as the vessel faded in the distance.

Garth Diamandis watched his benefactress leave with much the same bemusement as he’d watched her arrive in his former home of Spyre, lo those many months ago. There was simply no predicting what Venera Fanning was going to do next and he’d given up trying. So, with a shrug, he turned to the rest of her planning team, who were milling about in confusion at the sudden vacation of their mistress.

Garth clapped his hands loudly to get their attention. “Stop gawking!” he said. “We have a lot to do in very little time. There’s the Aerie underground to be contacted, and further infiltration of the pilot’s palace accomplished. Everything has to be set up to topple in the right direction at the right moment.

“You can’t overthrow a government by sitting around on your asses!”