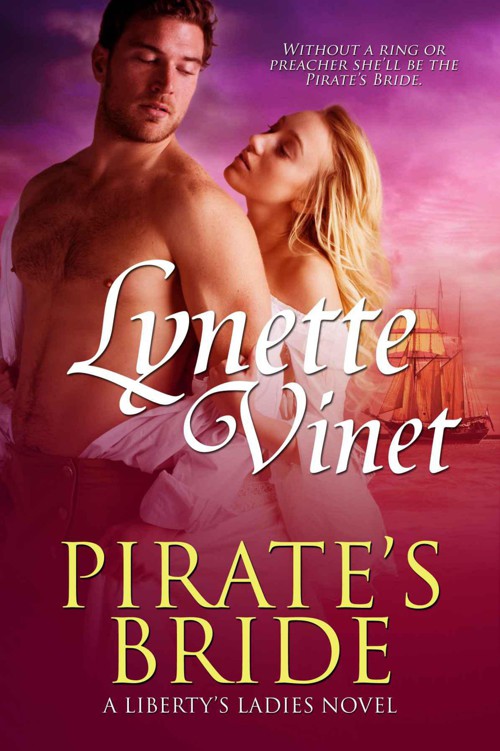 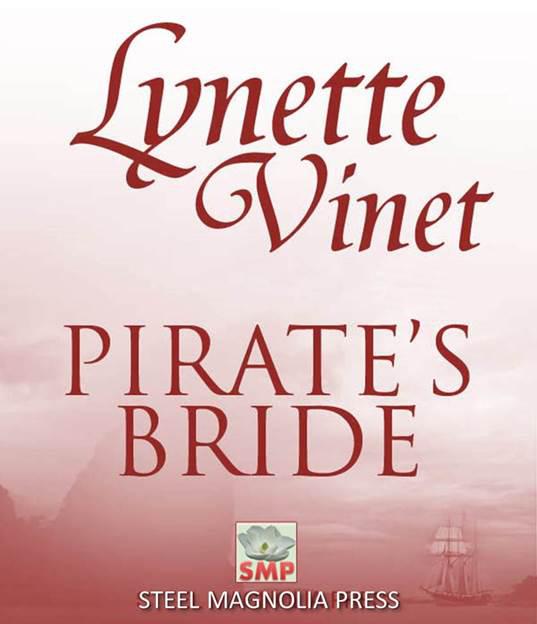 No part of this book may be reproduced or transmitted in any form or by any means, electronic or mechanical, including photocopying, recording or by any information storage and retrieval system — except in the case of brief quotations embodied in critical articles or reviews — without the written permission of publisher or author, except where permitted by law.

If he touched her, she’d kill him.

Emboldened by such a brave thought, the beautiful young woman clutched the small jeweled dagger in the palm of her hand. The ruby-encrusted hilt cut into her soft flesh she held it so tightly, and the cold steel of the blade resting against the thin material of her gown gave her a degree of assurance that she could adequately defend herself.

Within the cabin, all was quiet. Except for the slight pounding of the waves against the hull of the ship, she heard nothing. Earlier that evening, the voices of the piratical rebels and the women who were their captives had drifted through the solid plank door. She’d heard singing, hearty male laughter, feminine giggles, and then these same voices had grown louder as the men and women shuffled through the passageways to seek pleasure in each others’ arms. Now an ominous silence pervaded the ship, and she somehow knew that the man who had placed her here earlier would soon return.

“Animals! Doxies!” the young woman cried softly. In the dying candlelight she pirouetted sharply, her honey-brown hair fanning out and then swirling around her shoulders in long, graceful tendrils. The other women might take delight in being ravished by these colonial upstarts. She, however, wasn’t one of these women, these whores transported across the seas for the pleasure of the British soldiers quartered in Philadelphia. Never would she eagerly open her arms and legs for any man who’d have her. Not even for the captain of this notorious band of men, masquerading as privateers.

“Captain Hawk.” She mouthed his name with such vehemence that her eyes flared and resembled twin torches in the dying candlelight.

A shiver slid down her back. For a moment she wasn’t certain if she felt repulsed, frightened, or excited by the prospect of the man’s presence … of his touching her. No man had ever intimately touched her. She’d been properly kissed by some and fended off many an over amorous man with her friend Jeremy’s presence. She kept her heart and body as her own, never having dispensed with either of them … not even to her own husband.

The thought floated through her mind that since the hour had grown late and all was silent, perhaps the arrogant captain had found comfort in the arms of one of the other women. A small hope rose within her that the man, masked to conceal his identity, wouldn’t bother with her. Perhaps, just perhaps…

The click of the latch on the door brought her up sharply. A broad-shouldered shadowy form, whom she instantly identified as Captain Hawk, stood in the doorway. Quietly he closed the door. With the sound of the latch being locked into place, her heart knocked wildly against her rib cage. Hugging the dagger closer to her body, she realized the irony of killing the man with his own weapon.

Captain Hawk stood with arms akimbo, barely five feet from her. Candlelight emphasized the broadness of his shoulders in the white open-necked shirt, the form-fitting black breeches, and knee boots. Her gaze moved upward to the black mask in the shape of a hawk which covered the bridge of his nose and his eyes, his hair being covered by an ebony scarf and tied in a queue at the back of the neck.

Indeed, he struck her as a powerful, awesome figure, a man who inspired fear in those less brave. At the moment she felt more than cowardly as her legs shook and threatened to buckle, but she wouldn’t let him see her fear. She raised her shoulders, straightening her spine. This fearsome privateer wouldn’t bully her with his arrogance. She’d faced much worse in the form of her father, and she’d survived him!

“Have you finished your tantrum, wench?” Captain Hawk asked with a trace of amusement in his voice. “It isn’t every day I have to imprison a woman in my cabin. Usually my bed companions come quite willingly, even gladly.”

She moved forward a bit, hiding the dagger in the folds of her skirt. “You’re an arrogant, conceited man. I assure you that I’m not like your other women and won’t become a mewling kitten for your pleasure.”

Hawk laughed deeply. “I have no wish for a kitten, my sweet, but a wildcat. You seem to be of the latter persuasion, and my blood grows warm at the sight of you.” His gaze settled on her face and moved to her breasts, causing her to grow heated. “I do admit that you’re the most comely doxy I’ve ever seen and quite refined, too.” Making a move towards her, she escaped him by rushing to the opposite side of a table. This action stopped him in his tracks and once more, he laughed. But the sound was mellow, laced with passion.

“Ah, so you wish to play the reluctant maid, I see. Fine with me if playacting pleases you … Beth. That is your name, I believe. So, shall I play the lecherous duke and you the beautiful but virtuous serving girl? Or perhaps you’d like to be…”

“Stop your filthy ravings!” she cried.

“Good, good,” Hawk began and took off his belt to hurriedly throw it upon the floor. “I’m to be the lecherous nobleman. I always did want to pretend I was a member of the aristocracy. Spices things up a bit.”

“Wonderful. I’ve always loved dallying with the married ones. They’re so much more passionate than the timid virgins. I applaud you on your creativity, Beth.”

Flashing her a smile, Hawk made a dash for her. For a second she eluded him, thinking that she’d somehow escape him and convince him he’d made a horrendous mistake. She wasn’t a doxy sent to the Colonies for the soldiers’ amusement. But she couldn’t tell him the truth about herself, couldn’t admit to him who her husband was. Such a notorious man might use her true identity against her, and she couldn’t bear for anyone to know she’d been at the Hawk’s mercy … or, God forbid, his woman. She must fight this man, fight the sudden rush of excitement she felt by his very presence.

She started to protest anew, but a long arm slithered out and grabbed her about the waist, pulling her towards him and turning her to face him. The man breathed hard. His breath hotly touched her cheek and she caught the whiff of brandy, the acute masculine scent of him. Through the slits of the mask, his eyes were an indistinguishable shade, so dark that somehow they seemed to blend in with the mask, forming a whole.

His hand reached into her bodice and lightly twirled a nipple between his fingers before embracing the ivory mound fully, “God, you’re beautiful,” he whispered, his voice hoarse and thick with desire. “Let’s quit the playacting and enjoy each other, my lovely. I’ve never wanted a woman as much as you.”

Did he say such things to all his conquests? she wondered inanely as his hand continued fondling her breast. She knew she should move, should fight, but his lips touched hers in a soul-searing kiss which left her breathless, stopping all conscious thought. Perhaps she was wanton, a tease, like many of the gentlemen in London had told her. At that moment she’d have gladly stayed in this man’s embrace, pirate or not. Had she been fighting him or herself all this time?

His mouth transferred from her lips to the base of her throat to the valley of her breasts. “Come to bed, my sweet, and show me all you’ve learned in your trade. You’ll find me an eager pupil.”

His words splashed cold water on her ardor. She froze under his gentle, arousing assault. Couldn’t he tell she was inexperienced in such things? Did he truly believe she was here only to pleasure him, receiving nothing in return? The pompous, arrogant boob! Must all men believe women were good for only one thing? If not to browbeat them, to bed them, then to treat them like chattel and desert them. She realized that once this man’s lust was satisfied, he’d probably seek another one of the wenches on board and forget about her. What a love starved fool she was, her lips curling in disdain for herself and the man who held her in his grasp.

Pushing herself from him, he attempted to grab her anew. “Come here, sweetheart. You’ve playacted enough for tonight. You’ve sufficiently aroused me. In fact, your apparent virtue has me more than ready for you. Come.”

His tone left no doubt that he was growing weary with her and now demanded she move to the bed. Shaking her long honey-colored hair, she attempted to make her way to the door, forgetting it was locked. Once more, he reached out and ensnared her, pulling her against him, so close she felt the rapid beating of his heart, could actually feel his hardened manhood against her belly. He wanted her, and no amount of protests would prevent him from having her. She’d have to thwart him herself, and she shook at the thought of what she must steel herself to do if he didn’t desist. She’d never killed a man.

“I want you, Beth,” he said with a softness which nearly undid her. “Why do you torture me so? Can’t you tell that I’m languishing from desire for you?”

Pretty words, but she’d heard them often the last few years from too many men. There had been times she’d have willingly thrown herself into a man’s arms, his bed, if he’d promised love, marriage. However, she couldn’t marry anyone, since she already had a husband. Though Captain Hawk was more virile than the other men she’d known, he was still a man, and men caused pain to women by deserting them. This was one time she’d be the one to inflict the pain.

“I won’t.” With a sudden quickness she raised her hand, brandishing the dagger. The steel blade gleamed in the light, and Hawk stiffened.

“Your role as modest maid has gone too far, sweet. Put down the knife.”

“Not until you promise to leave me alone.”

He surprised her by letting her go and moving away.